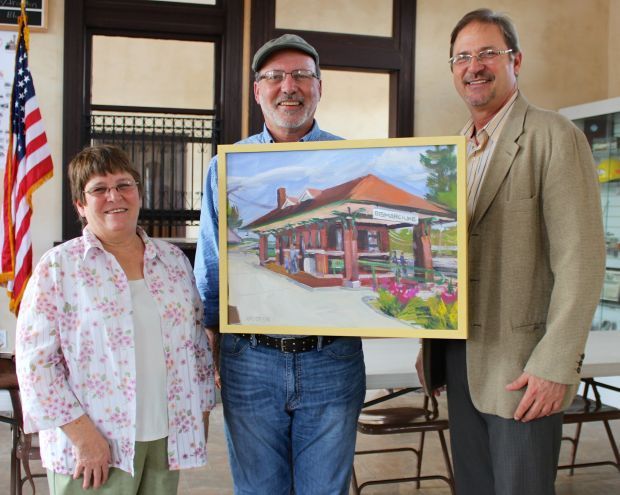 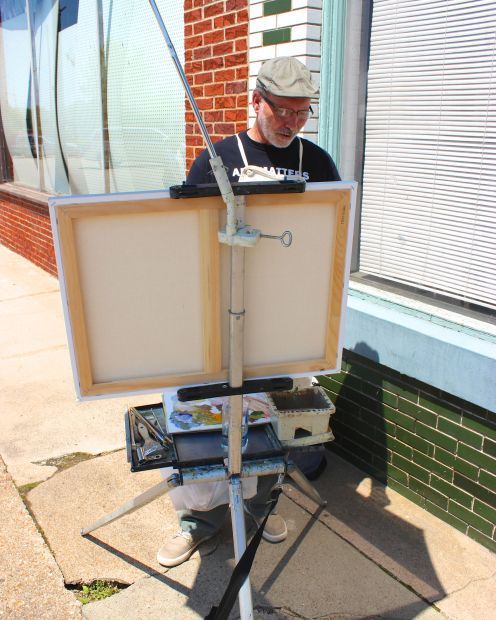 While teaching Bismarck high school students and community artists about plein art in May, artist Michael Anderson begins work on a painting of the city's old depot. He recently donated the painting to the Depot Committee and it now hangs in the building that was its inspiration.

A respected artist, illustrator and designer who took part in an educational event for children at the city’s former train depot last spring, returned recently to present the finished painting of the historic building where it is now on permanent display.

When Belleville, Ill., artist Michael Anderson visited Bismarck in May it was part of an all-day program co-sponsored by the Bismarck Depot Preservation Committee and Missouri Preservation put on for local elementary students to learn more about the railroad’s part in the history of the town, as well as the state of Missouri.

In the afternoon, students from Bismarck High School — along with several other community artists — learned about plein art under the tutelage of Anderson.

Plein air is a French word that literally translates as ‘open air’ and is painting or drawing done outside in the open air.

That day, Anderson explained the practice and philosophy of plein air painting to the aspiring artists before mentoring them in their depictions of the depot created over a period of several hours. It was during the exercise he began work on the painting that hangs today in the historic building that inspired it.

Once he returned to his Illinois studio, Anderson said he made a few repairs to his work and then started playing around a little more with it.

“I was happy with it,” he said. “I had it photographed. I brought it back to my studio, but the more I looked at it, the more I didn’t really care for what I had done. So, I went back and tried to get it as close to the way it was when I had it painted that first day. I had a photograph of it on my easel when I was out here and thought it was attractive and didn’t think I needed to go as far as I did.”

Anderson said that, after working on the painting one more time, he found himself much happier with the finished product.

“One of the things we do every year is statewide honor awards for preservation for projects around the state and the Bismarck depot won an honor award in 2012. We came up with this new program with one of our board members and we decided to make our time at the depot in May an interdisciplinary day.

“In the morning we had grade schoolers over to learn Missouri history. We talked about how the building related to local history and Missouri history. Then, in the afternoon, Michael volunteered to come down and help us out by talking about plein air and teaching students in plein air painting.”

Depot Committee President Liz Bennett said she and her fellow volunteers were very happy to learn of Anderson’s plan to gift his painting.

“Receiving this painting for the depot is wonderful,” she said. “Everyone is so excited and we picked our spot. This is very exciting for the Depot Committee and we really appreciate Michael Anderson and Bill Hart for making it happen.”

Responding to Bennett's compliment, Hart said, “Well, it wouldn’t have happened if the committee hadn’t put in all the hard work they did on the depot. The committee’s work is just fantastic and I congratulate them.

“The whole reason behind this is to help people realize that Bismarck is somewhere and it’s important for a variety of reasons. The railroad depot has been a vital part of Bismarck's history. It’s awesome that trains still come through Bismarck. A lot of times when the train quit coming, the people quit coming. That never happened here.”

“The whole reason behind this is to help people realize that Bismarck is somewhere and it’s important for a variety of reasons." — Bill Hart, Missouri Preservation executive director

While teaching Bismarck high school students and community artists about plein art in May, artist Michael Anderson begins work on a painting of the city's old depot. He recently donated the painting to the Depot Committee and it now hangs in the building that was its inspiration.