The Colorado State University (CSU) Tropical Meteorology Project Team is predicting an “above average” Atlantic hurricane season this year, with 17 named storms. This includes eight hurricanes, four of which are predicted to become major hurricanes.

The CSU team bases its forecasts on models that use 40 years of historical hurricane data and evaluates conditions including:

The CSU team cites the likely absence of El Niño as the primary factor for an above-average season. El Niño is a climate pattern in the Pacific Ocean that breaks normal conditions. Hurricane frequency declines in El Niño years due to increased wind shear over the Caribbean and Atlantic, which can tear apart hurricanes as they begin to form.

The 2021 hurricane season is exhibiting characteristics similar to 1996, 2001, 2008, 2011 and 2017, says CSU. These seasons all had above-average Atlantic hurricane activity, according to Phil Klotzbach, research scientist in the Department of Atmospheric Science and lead author of the report.

NOAA Will Issue Hurricane Prediction in May

The National Oceanic and Atmospheric Administration (NOAA) will issue its initial 2021 hurricane season outlook in late May 2021.

“Major hurricanes” are defined as Category 3, 4 or 5 based on the Saffir-Simpson Hurricane Wind Scale. Hurricanes that fall in these categories have sustained winds above 111 miles per hour, which can cause catastrophic damage that could result in power outages and leave residential areas uninhabitable for several days to months.

The NOAA updates the statistics it uses for its prediction models once a decade. “This update allows our meteorologists to make forecasts for the hurricane season with the most relevant climate statistics taken into consideration,” said Michael Farrar, director of NOAA’s National Centers for Environmental Prediction, in a statement.

The official hurricane season runs from June 1 through Nov. 30, but storms can form before and after. 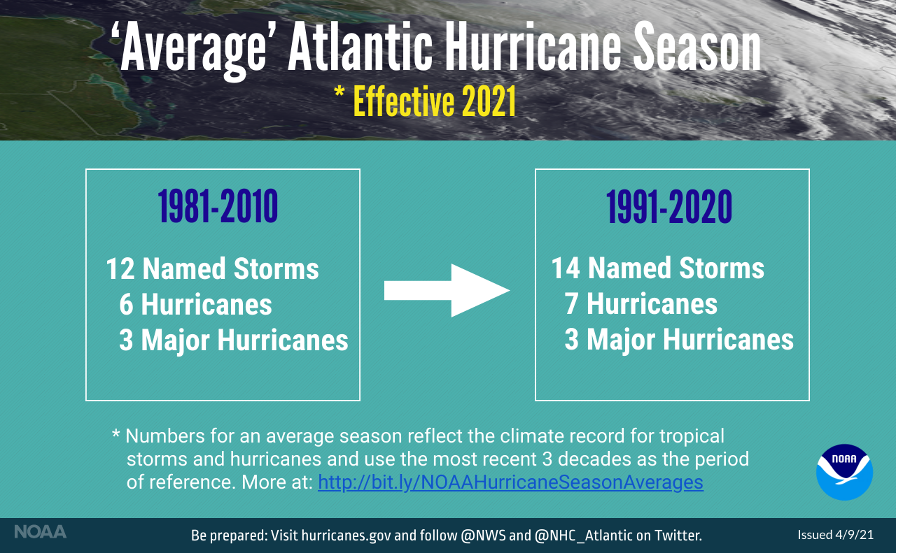 How to Prepare for the Hurricane Season

FEMA recommends the following steps to prepare for any hurricane season:

During a hurricane, FEMA recommends following guidance from local authorities. If you are advised to evacuate, grab your “go bag” and leave immediately. Additionally:

For more information read how to prepare for the next hurricane.

Here’s how to navigate to the right insurance for hurricane season.

Hurricane insurance for your home

Hurricane insurance for homeowners often requires a combination of insurance types to cover both wind and water damage. Depending on where you live you may need two or three insurance policies:

Hurricane insurance for your vehicles

If your car is damaged during a hurricane, such as damage from flood water or flying debris, you will need comprehensive car insurance in your auto insurance policy in order to make a claim. Comprehensive coverage also pays for car theft, vandalism, car fires, and animal collisions.

The nationwide average cost for comprehensive insurance is $168 a year, according to the National Association of Insurance Commissioners.

Dumb mistakes you can avoid when investing

McDonald's Teams Up With Biden Admin To Promote COVID Vaccinations

McDonald's Teams Up With Biden Admin To Promote COVID Vaccinations

How you can create a steady income for retirement

How you can create a steady income for retirement

Why you should shop small and support local businesses

Why you should shop small and support local businesses

Why I Just Bought the Stock Market's Fear Index

Spoiler alert: It's not because I'm fearful.

How to Survive Inflation: 3 Successful Investors Weigh In

Inflation is here. How can you protect your holdings?

How to fill in your financial blind spots

Also, check out more of the week's best financial tips from experts at NerdWallet, Forbes and the Motley Fool.

Once you get started, you'll wonder why you didn't do this sooner.

How shopping small makes a big impact in your community

According to the U.S. Small Business Administration, when you spend $100 at a small business, $48 stays in the community. Spend the same $100 at a national retailer and only $14 stays.

5 Moves to Ensure You're a Retirement Multimillionaire

It's possible to retire a multimillionaire, but you'll need a strategy.

Crush Your Retirement Goals With These 3 Moves

Your dream retirement is waiting. Go after it.

1 Simple (and Safer) Way to Invest in Cryptocurrency

It's possible to invest in crypto while reducing your risk.

You May Qualify for Free or Cheaper Health Insurance Now

The latest coronavirus relief package did more than dole out $1,400 checks. The law also made health insurance free for millions more people and reduced costs for others, at least…

These ETFs can reduce your risk while maximizing your earnings.