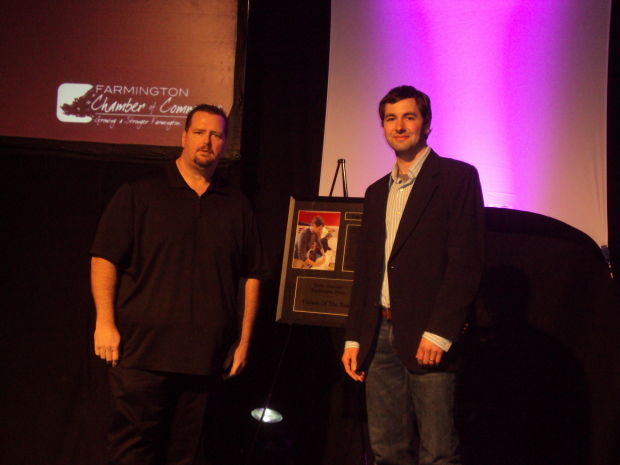 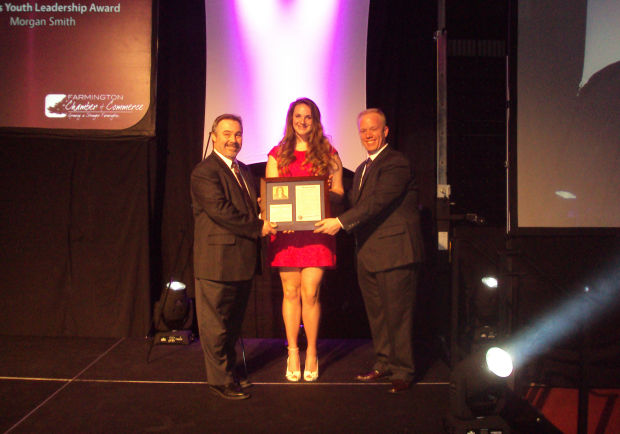 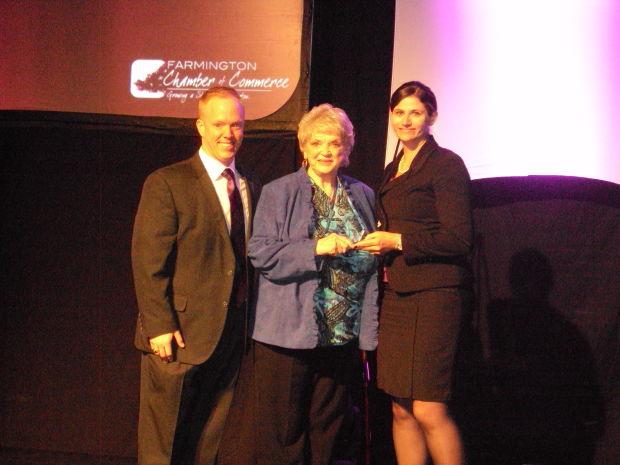 To kick off the evening of recognitions the 2013 Chair, Lisa Sumpter thanked retiring Chair Mary McEntire for her service in 2012 and in previous years. They also recognized present Board of Directors for the chamber and two members Kevin Thurman and Shawn Merritt who retired from the board at the end of 2012.

Thomas works alongside his mom Debbie Thomas and grandma Jane Christian in the sandwich shop. He spends his weekdays assembling bread, meats, cheeses and all sorts of garnish for his customers. He offers great sandwiches and soup at a fair price.

“But then every afternoon Thomas does something out of the ordinary for a modern day business plan. He counts up the number of sandwiches sold during that day. Then he and a teenage helper make up an equal number of sandwiches to give away for free. Selling sandwiches is Thomas’ business. Giving away just as many is his mission, a “ministry” if you will,” said Smith.

Smith continued, since Thomas opened his doors in November he has sold thousands of sandwiches and bowls of soup. He’s also given away just as many sandwiches to a multitude of help and charity organizations. From food pantries to school food backpack programs for children who might otherwise not have supper, BOGO Sandwiches is helping to feed the needy among us, all while providing a quality food service to the paying public.

Sutherland said the Youth Leadership Award reflects the mission of Kiwanis to inspire young people to achieve their personal best through service leadership.

He continued Morgan Smith is a senior at Farmington High School and will graduate in May. She has been involved in many activities in school and church, plays tennis and squeezes the most out of life.

Smith will attend Missouri Baptist University in the fall and will  play tennis.

She presented the Downtown Pride Award to Larry and Sharon Hughes. They are the owners of 214 Package Liquor and Larry is one of the founders of the Farmington Downtown Development Association.

In 1985, Jack Sebastian and Larry took two days off work and walked through the downtown Farmington and talked to many of the businesses about the possibility of starting a Downtown Development Organization. After the meeting was held the organization was formed and has been going every since.

They created jobs not only in their own building but around the area and they set up their 34th tower in the area this month.

Loughary said this award is about their customer service. About a month ago a storm came through the area and knocked out their Internet at the radio station, which is provided by Big River Broadband.

He continued they called their Internet company on a Sunday morning to see when they could have a technician at the radio station to fix the Internet service. Within a short time someone was there and the station was back up and running with their Internet.

Loughary said this is just one example of Big River Broad band’s customer service and why they deserve the award.

He said not many people are more deserving of this award than Dr. David Cramp. He is the St. Francois County Presiding Commissioner, was the Farmington R-7 School District Superintendent, former principal and teacher, and is the Director of the Farmington Education Foundation.

“But the thing he is most proud of is the state baseball title he led Farmington too,” said Toti.

Toti added he is an average guy who does above average things.

Next, Ginger Taylor, vice chair of the Farmington Chamber of Commerce said in 2010 a parent went to the St. Paul Lutheran School Board of Education and asked about extending their education into high school.

She said, in the spring 2010 the school began looking into the feasibility of a Christian high school in the area and what it would take to make it work. They created a steering committee to begin the process of the high school.

They created a business plan, marketing strategies and did a lot of research to get where they are today.

In August 2012 St. Paul Lutheran High School opened its doors with nine girls and added a boy in January. The school is now at 10 students in its opening year.

Because of this the St. Paul Lutheran High School is the recipient of the 2013 Farmington Tradition and Progress Award.

Sumpter recognized a well known resident in the area with the Lifetime Achievement Award.

Janet Douglas was recognized for her achievements in writing, journalism, marketing, radio personality, the Farmington Downtown Development Association, being a cancer advocate and much more.

“Writing is like a tapestry because it tells a story,” said Douglas.

Maridee Lawson is a reporter for the Daily Journal and can be reached at 756-8927 or mlawson@dailyjournalonline.com.

Stockhoff Memorial Nursing Home in Fredericktown held a nursing home parade on May 8 as a way to put a smile on the faces of its residents.