The Parkland's unemployment rate is looking much better — on paper — than last year's numbers around this time, with an average of 3.3% for the counties of St. Francois County, Ste. Genevieve, Washington, Iron and Madison, according to the Federal Reserve Bank of St. Louis’s May 2022 numbers, the latest statistics available on the site.

The 3.3% unemployment rate is also significantly better than the disastrous April 2020 numbers following the opening of the pandemic, when the Parkland’s average unemployment rate climbed to 10.2%. None of the numbers at that time came near the greatest recession since The Depression, the housing and banking busts that in February 2010 resulted in an average of 15% unemployment for the Parkland.

Still, many area employers are feeling the pressure to find quality employees who stay, according to one woman who regularly organizes hiring events in the region. She said it’s like nothing she’s seen before.

Debra Thompson is a regional business services manager for the Workforce Development Board of Southeast Missouri. She said while labor statistics seem significantly more optimistic than they’ve been in the last two years, what she’s seeing in real life doesn’t necessarily line up with the numbers.

“I have heard through the news that so many jobs have been created and you know, everything's going back to normal,” she said. “Unfortunately, out in the field, I don't see that professionally or personally. Most employers are still having a problem finding employees. It is a huge, huge issue.”

The reasons are varied for the employee shortage, Thompson said: employees, in the shadow of a global pandemic, are reassessing how their jobs fit in with their lives. Accurate unemployment numbers can also be compromised if workers run out of unemployment benefits and fall off the rolls. And there are more employment trends to consider.

“Baby Boomers are retiring at a faster rate because of COVID. Then we have a lot of people, after COVID, who are reevaluating their situations — do they really want to go back to work at a fast food restaurant or a grocery store?” Thompson said. “We have seen more individuals wanting to go back for continuing education to get into the truck driving field, and IT interest is increasing.”

Oddly or not, she said, some fields have fallen out of favor among the unemployed looking for different and more lucrative lines of work.

“The nursing field hasn't been as popular for us. I used to send a lot of individuals to nursing school, but post-COVID, it doesn't seem like that is requested as much,” Thompson said.

Adding to the employment shake-up is the issue of daycare.

“A lot of daycares went out of business during the pandemic because everyone was working remotely and either were looking after their own kids, or they were unemployed and couldn’t afford it,” she said. “If you can't find a childcare service, you know, you kind of weigh your options. A lot of the women in my neighborhood also have weighed the benefit of working remotely for less pay so they can raise their own kids. These are the kinds of things I hear when I'm out there in the field … people have just started changing their way of thinking.”

Thompson said gas prices have done the thinking for employees, too.

“A lot of people who are out in the rural areas, they don't want to drive to St. Louis and spend $45 a day in gas. So there's a lot of remote positions that you might take that are less per hour, but you don't have to commute and you don't worry about childcare. I'm kind of seeing more of that,” Thompson said.

On the employers’ side, she said, “they call me all the time, email me all the time, and they're still desperate for people to hire. Lots of open positions, you have people working longer shifts now. One restaurant, they just don't even serve food Monday, Tuesday and Wednesday because they have no staff to work the kitchen.”

Candy Hente, executive director with the Farmington Regional Chamber of Commerce, said it used to be, chamber members were chiefly interested in networking and opportunities to market their businesses, “but that has quickly shifted to finding good employees.”

“In January, we actually did a workforce presentation at our luncheon, where you had a panel of HR professionals, including one of the staffing companies that's here,” Hente said. “We extended the length of the luncheon because there was a lot of talk, a lot of interest, a lot of feedback from those who attended, many saying they’ve had to change a lot of their recruiting techniques — being faster to interview and faster to offer people jobs. You know, making that application process quicker.”

Hente said the chamber is looking at delving into customer service training for employers, having already created locally-made videos featuring area employers talking about what they need in an employee.

“Having a skilled workforce is something that, of course, we're concerned with, and MAC and UniTec offering a lot of the classes that they have, where people can gain skills beyond entry level work, is a huge step in the right direction,” she said.

Thompson said for the most part, it’s a worker’s job market. She said she spoke to a colleague that had been talking to college students who told him they were working smarter, not harder.

“I'm older, 51, but I went to work at 16 and worked fast food because that's what it was,” Thompson said. “This guy said, while he was in a meeting with some of his students, one was like, ‘Oh, I'll be back in an hour.’ He ran and did a delivery real quick and made $65 in less than an hour. He had another student, goes ‘I'll be back in just a few.’ He ran and picked up someone, you know, Uber driver. And he came back and he’d made you know, it was like $45-50. We just have to accept the world is changing.”

And some employers are more adaptive to change, while some just aren’t, Thompson said. She referenced a company in Warrensburg that used to have 12-hour shifts, “you know, those lovely 12-hour rotating shifts no one really wants to do,” she said. “You just did 12-hour shifts for two weeks and then you have to change again and readjust to a different 12 hours — those days may be over.”

Thompson said the Warrensburg company couldn’t fill the 12-hour shifts, so during the worst part of COVID, they switched to four-hour shifts.

“They upped the starting wage to $22 an hour, for four-hour shifts for stay-at-home mom who just wants to make some extra money for Christmas or to have her own spending money,” Thompson said. “She can go after the kids are on the bus, work four hours and still be home before they get off the bus, get the house work done and still make $88 and have some money in her own pocket. That's huge. That is huge.

“I mentioned that to one employer. He laughed. He said that will never work. Well, it has worked and it has been very successful for a year now for them. Because you also have Bob, who retired because he could retire, because of COVID, but he's 68 years old. And now he's bored because he got all of his house projects done in a year. Now he can go in, get out of the house, keep that usefulness and work a four-hour shift.”

Thompson said business owners and corporations have demanded flexibility and sacrifice from employees for decades, “and to me, those corporations are going to have to look at changing the way they treat their employees. Evaluate the salaries, and maybe there's an employer that can't pay a lot, but there's other things you can do.

"I had one employer, they bring in food trucks several days a week and they let the employees go out there and they cover the entire cost of lunch. Wow. That’s a benefit that it makes the employee feel like they're part of the team. Right? And so these are things that thinking outside the box is what employers are going to have to do.”

Washington County Memorial Hospital, a critical access hospital in Potosi, has been recognized with the Missouri Hospital Association’s Aim fo…

A century ago, poinsettia was added to Santa’s “naughty” list, but the plant’s reputation for being poisonous is unfortunate, says University …

Food price inflation should slow in 2nd half of 2023, says expert 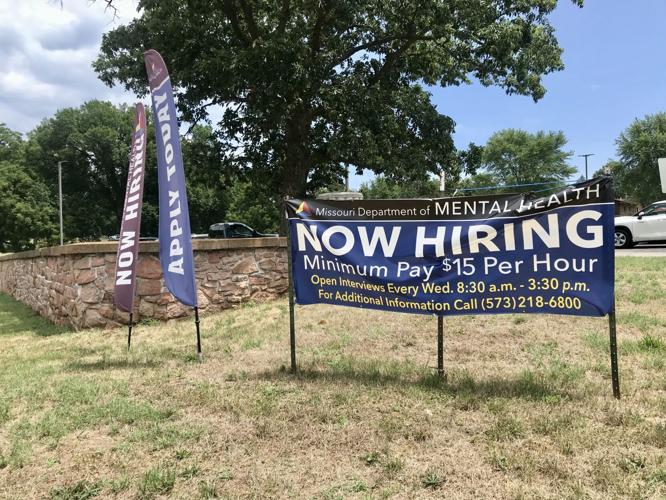 Raising pay, working creatively with shifts and stepping up benefits is what many employers are doing to entice employees. Southeast Missouri Mental Health Center in Farmington has been advertising for employees for months.

The shaded vertical column more than halfway to the right of the graph indicates the massive unemployment trend that happened to Ste. Genevieve, Iron, Madison, Washington and St. Francois counties after the pandemic lockdowns kicked in.