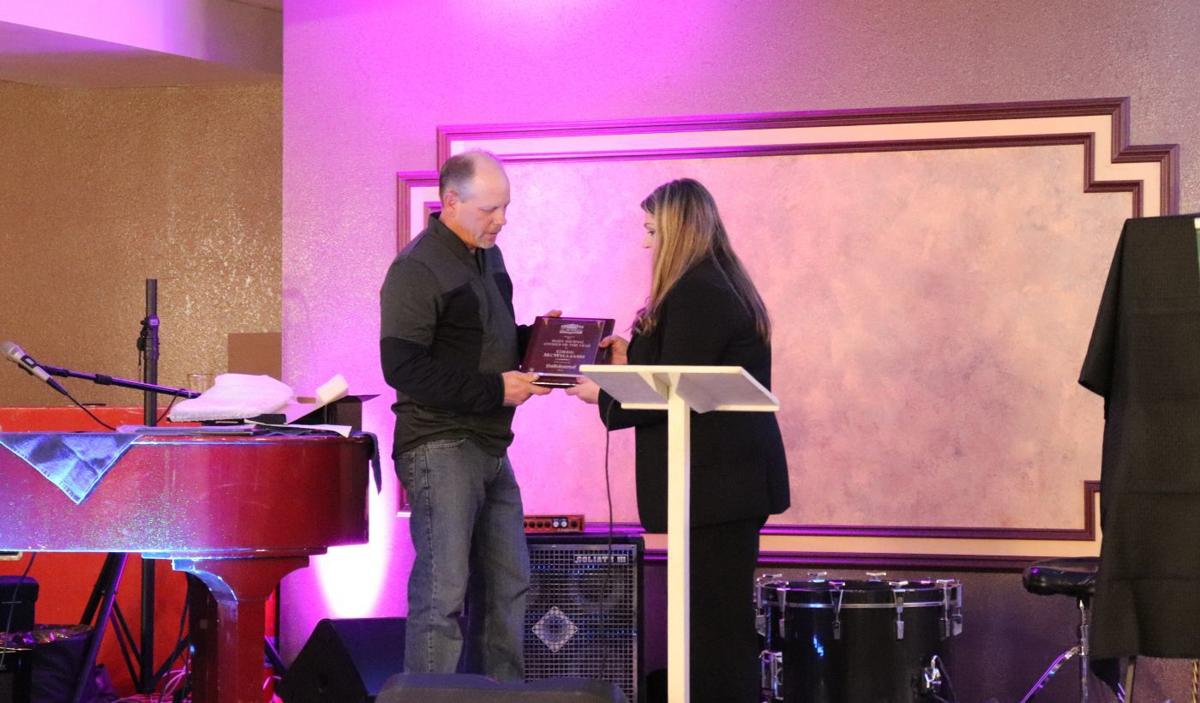 Greg McWilliams is presented with the Daily Journal "Citizen of the Year" Award at the Park Hills-Leadington Chamber of Commerce Installation and Awards banquet. Daily Journal Advertising Sales Director Michelle Menley announced McWilliams as the award recipient during Friday's banquet. 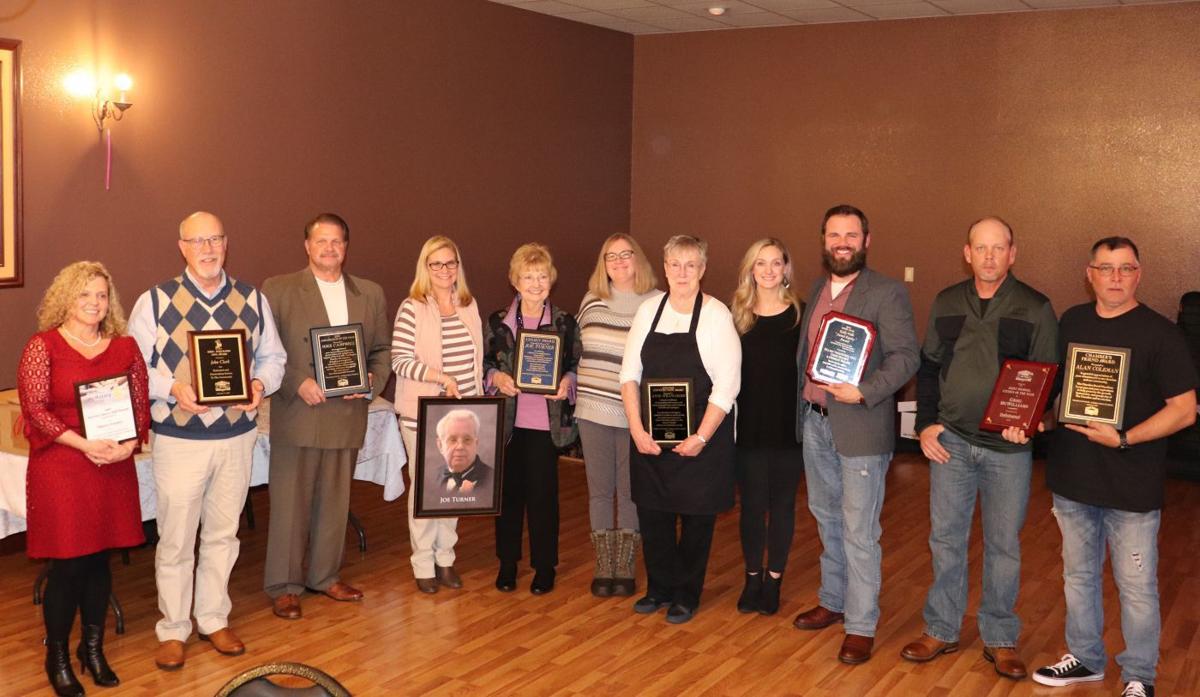 Award recipients stand together after a night of recognition and reflection at the Park Hills-Leadington Chamber of Commerce's Installation and Awards banquet Friday.

The Park Hills-Leadington Chamber of Commerce held its annual Installation and Awards banquet Friday evening to recognize a few outstanding citizens. Among those recognized was the Daily Journal “Citizen of the Year” Award recipient Greg McWilliams.

The evening began with a social hour as banquet attendees filtered into Elizabeth Hall in Leadington. “It’s like, a totally 80s kinda thing!” was the banquet theme this year. Event guests admired each other’s '80s-themed costumes and snapped photos together at the selfie station. Guests then enjoyed dinner at tables with nostalgic centerpieces of Rubik's Cubes, Pop Rocks, and Troll dolls, among other memorable blasts from the past.

The awards portion of the banquet took place toward to end of the night. Eight awards were given to members of the community who have made a positive impact on the area.

Greg McWilliams was announced as this year’s Citizen of the Year for his steady work in helping to rid city streets and streams of litter while attempting to bring the community together in the process.

Daily Journal Advertising Sales Director Michelle Menley presented the award to McWilliams and spoke of what made the Park Hills resident stand out for consideration.

“It’s because of volunteers like this year’s Citizen of the Year recipient that global movements like World Clean-Up Day can exist,” said Menley. “On Sept. 15 of last year, 20 million volunteers from 180 countries and territories came together to clean up the communities around them. For our recipient, that community is Park Hills.

“Bringing volunteers together to participate in that global cleanup event is just one of what our recipient considers opportunities to get the community involved in tackling the litter within the city,” she added. “When he’s not working at his job at Boyer Funeral Home or organizing a litter cleanup crew, along with his 11-year-old niece sometimes, this lifelong resident of Park Hills can usually be found restoring local cemeteries or working on one of the various other projects he has planned with the goal of making Park Hills a cleaner, more beautiful place to live.”

McWilliams humbly accepted the award and thanked people who have been of great help throughout the year, including council members, city workers, and volunteers.

For the coming year, McWilliams said he plans to continue the restoration of area cemeteries like Gibson’s cemetery and said he was hoping to get started on another project that means a lot to him, a memorial park in downtown Park Hills. He added that he would like to see young people getting involved in their community and encourages young citizens to voice their concerns and opinions regarding things that can be done to make Park Hills a community where they can continue to live and someday raise their families.

Seven other awards were presented at Friday’s banquet by different area organizations.

The “Chamber’s Friend” Award was presented by 2019 Chamber President Melissa Hosna to Park Hills Councilman Alan Coleman. Hosna said that she was very honored to present the award to such a deserving individual.

“He spends so much time volunteering for the chamber, and most of it is behind the scenes which no one ever sees,” said Hosna. “He goes unrecognized, but he doesn’t do what he does for recognition because he cares for the community and has a passion for it.”

The KFMO/B104 “Kelly Valle Sweat Equity” Award was presented to Chris and Derick Hulsey of Hulsey Properties. Newly-sworn-in Chamber President Chelley Odle spoke of the tireless work ethic possessed by the local real estate developers and commended the company for their efforts in helping to create a beautiful community.

Mike Campbell, of the Missouri Job Center in Park Hills, was announced as the 2019 Chamber Ambassador of the Year. Campbell has been named the chamber’s “Acclaimed Ambassador” for all four quarters of 2019.

Local Attorney Brian McNamara presented the St. Francois County Rotary Club’s “Service Above Self” Award to Sherry Cauley, founder of Upward Smiles. McNamara detailed milestones in Cauley’s long journey to providing dental care to thousands of area children and building her organization into what it has become.

Former Park Hills Mayor John Clark was awarded the KREI/KTJJ “110%” Award presented to him by the evening’s Master of Ceremonies Chad Speakar.

The chamber’s “Lifetime Contribution” Award went to Anne Strangemeier. The award was presented to Stangemeier by Glenda Straughn who mentioned just a few of the many ways Stangemeier has contributed to the chamber and the community over the years.

The last award to be presented was done so posthumously to the late Joe Turner, of Turner Chevrolet. Bob Gerig presented the chamber’s “Legacy Award” to the much-adored businessman and Turner’s wife and daughter accepted the award on his behalf.

Dinner was catered by Glenda Straughn, Stangmeier, Coleen Williams, and Sharon Meier. Bar and drink service was provided by The Riverside Grill of Park Hills.

Despite the inclement weather, Kansas city-based Elton John tribute band, “Elton Dan and The Rocket Band” made it to the event and lit up the stage with memorable hits from the past.

After the music wound down to an end, exiting-Chamber President Hosna took the stage to recall some of the chamber activity highlights throughout the past year, which included holding five ribbon-cuttings and adding 13 new investors.

Along with handing out the year-end awards, the banquet was held to swear in chamber officers and members of the chamber board of directors for the new year.

The chamber board of directors and officers were then sworn in by Speakar. Board members this year include Hosna; Jan Alsup, of Unico Bank; Shawn Merritt, of Merritt Homes; Odle, of KFMO/B104 Radio; Erin Noland, of Southeast Community Credit Union; Kylie Mitchell, of Belgrade State Bank; Danielle Basler, of Mineral Area College, Ursula Warren, of Serenity HospiceCare; Ronni Conley, of KFMO/B104 Radio; Brenda Jordan, of The Printing Co.; Heather Garner, of Southeast Economic Development Fund (S.E.E.D.S.); and Tish Roberts, of Culligan of Leadington.

Representing the City of Leadington as ex-officio is Alderwoman Cassie Schrum. The 2020 ex-officio representative for Park Hills is City Court Clerk Tracy Fisher.

This year’s chamber treasurer position will be held by Alsup and Tamara Coleman will remain as the chamber’s executive director.

Coleman said that despite some setbacks, like bad weather, the chamber was very pleased with how the event turned out.

“Despite the crazy, unstable weather, attendance was good, and I think the chamber board managed to outdo themselves again this year,” said Coleman. “We’ve heard nothing but rave reviews about Friday night’s entertainment, decorations, and awards.

“Elton Dan and The Rocket Band put on an unforgettable show and received tremendous approval from everyone in attendance,” she said. “This year’s award winners were perfectly matched to each of their respective awards. I don’t think the teams who chose them could have done a better job.”

Coleman continued saying that the '80s theme was an absolute blast this year and it was really fun seeing so many people participate with costumes.

“I think everyone really enjoyed taking a step back to their past to relive such a fun decade,” Coleman said. “I can’t even begin to guess how we are going to top this next year.”

Greg McWilliams is presented with the Daily Journal "Citizen of the Year" Award at the Park Hills-Leadington Chamber of Commerce Installation and Awards banquet. Daily Journal Advertising Sales Director Michelle Menley announced McWilliams as the award recipient during Friday's banquet.

Award recipients stand together after a night of recognition and reflection at the Park Hills-Leadington Chamber of Commerce's Installation and Awards banquet Friday.