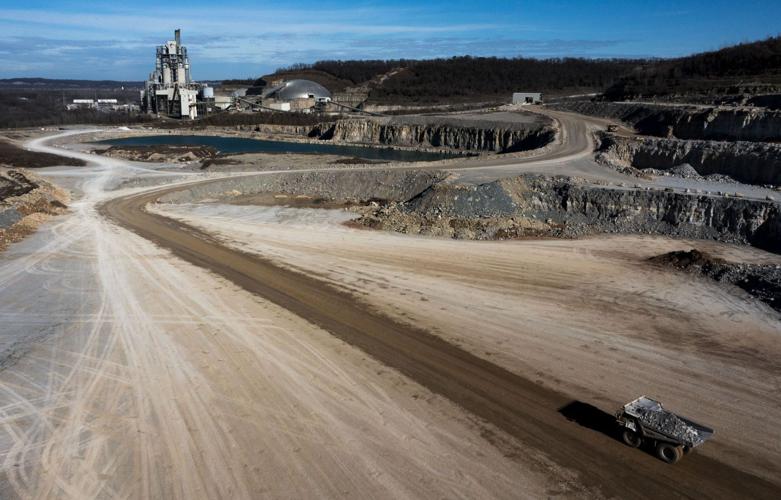 A dump truck carries rocks to the Holcim cement plant (top left) near Bloomsdale on Nov. 29. The Ste. Genevieve County plant, owned by Chicago-based LafargeHolcim, the industry's top cement producer, was one of two Missouri cement plants chosen by the U.S. Department of Energy to receive federal funding to assess carbon-capture options on site. 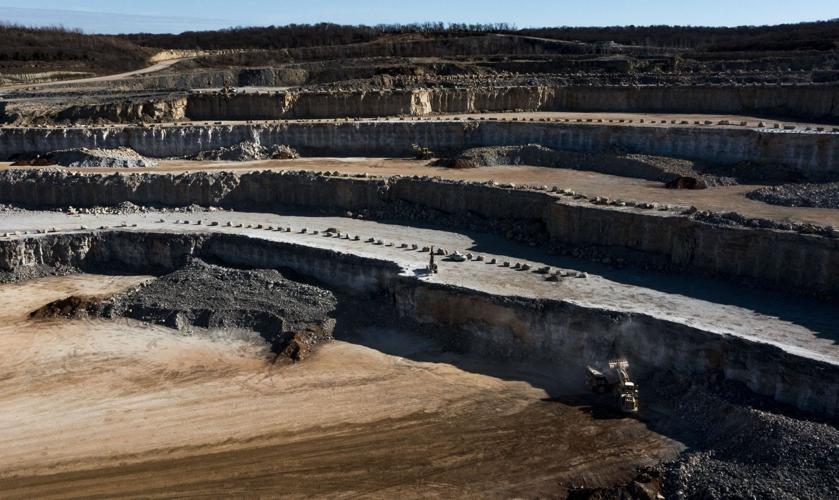 A front loader fills a dump truck at the Holcim cement factory near Bloomsdale on Nov. 29.

Missouri cement producers are looking to a range of new technologies — from freezing carbon as it exits smokestacks to chemically separating it — to combat the industry's massive greenhouse gas pollution, and join a trend gathering momentum.

Missouri’s mix of abundant limestone and river access for shipping helps make it a national cement-production giant — trailing only Texas, according to the U.S. Geological Survey. The world’s largest cement kiln of its kind is at a plant near Ste. Genevieve that’s set to explore the use of carbon capture technology.

The Ste. Genevieve plant run by Swiss-owned LafargeHolcim, the top cement producer in the U.S., is just one recent example reflecting the push to decarbonize. The site was one of two Missouri cement plants recently chosen by the U.S. Department of Energy to receive federal funding to assess carbon capture options on site, along with the Central Plains Cement Co.’s Sugar Creek Plant, outside of Kansas City. And in a separate move just a week later, Continental Cement Co., based in Chesterfield, announced its own intention to become carbon-neutral by 2050, joining a collection of industry peers.

The chain of moves is striking, given the material’s pervasiveness in modern society, and its outsized impact on the climate. Concrete — held together by cement — is the second-most used resource in the world by volume, behind water, academic experts say.

But making cement accounts for 5% to 8% of all carbon emissions, worldwide, the experts said. That's roughly equal to the amount of global greenhouse gases from buildings, and about half of the emissions from transportation.

“Most people think about power plants and cars,” said Hafiz Salih, a research engineer at the University of Illinois who is managing a study on how to adopt carbon capture equipment at the Ste. Genevieve plant. “Usually people don’t think about cement.”

An enormous amount of energy is required to make cement. Producers start with materials such as limestone, shale, iron ore and clay, and put it into a kiln — generally a long, rotating pipe, with one end higher than the other. Materials gradually move from the high end to the low end, where flames heat the kiln to temperatures of 2,700 to 3,000 degrees, often derived from burning fuels like coal.

But the largest share of emissions comes from the raw materials themselves, which undergo a chemical change at those extreme temperatures — conditions that incinerate much of the carbon that makes up rocks like limestone, the chief ingredient in cement. For every ton of material fed into a cement kiln, only two-thirds of it remains as a solid that emerges from the other end.

The Department of Energy is offering a helping hand, through efforts to target "difficult-to-avoid" emissions from certain industries.

“Our society is based on two main construction materials: concrete and steel,” said Claire White, an engineering professor at Princeton University and leader of the school’s Sustainable Cements Group. “We can’t stop constructing ... We have to make sure it’s sustainable.”

A range of strategies exist to capture carbon emissions from industrial processes like cement production. Some techniques force a plant’s emissions, called flue gas, to undergo chemical reactions with certain solids or liquids, causing carbon dioxide to stay behind as the gas moves by. At the Ste. Genevieve plant, however, the plan is to evaluate a “cryogenic” system that will capture carbon by rapidly cooling the hot flue gas to opposite temperature extremes, and making it into a liquid.

"The CO2 will start to liquify before the other components," said Salih, adding that the plan is to pump the liquified carbon thousands of feet underground, where it will be stored beneath an impermeable rock layer. The ultimate objective is to retrofit the plant with a system able to separate up to 95% of its carbon emissions.

The cryogenic approach to carbon capture is also being pursued at the Kansas City-area cement plant that received federal funding. The design of that system, spearheaded by a Utah-based firm, will have the potential to capture 30 tons of CO2 daily.

Meanwhile, the Chesterfield-based Continental Cement Co. did not identify a specific route for decarbonization, but said it signed onto an industry "roadmap" that examines carbon reduction "across all phases of the material’s life cycle, such as reducing CO2 from the manufacturing process, decreasing combustion emissions by changing fuel sources and shifting toward increased use of renewable electricity." Continental did not respond to multiple requests for comment.

U.S. cement production is concentrated among a relatively small pool of facilities — just 96 plants spread across 34 states, plus two in Puerto Rico — and that means these new technologies, if successful, could be rapidly adopted and trigger sweeping change.

But experts warn that there's not yet a lot pushing companies to change. The Department of Energy grants are one of the first significant jolts to advance this kind of investment. More widespread incentives from governments, though, “could completely change the situation,” White said.

But action must happen fast, if the world is to dodge the worst impacts of climate change.

“We don’t have time to wait around another 10 years before thinking to reduce these emissions,” said White.

LafargeHolcim so far is just studying options. It has not committed to installing the equipment near Ste. Genevieve.

But the company echoes a sense of urgency about establishing carbon-neutrality goals. It calls them an industry imperative.

“These are the steps that we need to take now,” said Dreyer. “We believe it’s the long-term solution in our industry.”

Washington County Memorial Hospital, a critical access hospital in Potosi, has been recognized with the Missouri Hospital Association’s Aim fo…

A century ago, poinsettia was added to Santa’s “naughty” list, but the plant’s reputation for being poisonous is unfortunate, says University …

Food price inflation should slow in 2nd half of 2023, says expert

A dump truck carries rocks to the Holcim cement plant (top left) near Bloomsdale on Nov. 29. The Ste. Genevieve County plant, owned by Chicago-based LafargeHolcim, the industry's top cement producer, was one of two Missouri cement plants chosen by the U.S. Department of Energy to receive federal funding to assess carbon-capture options on site.

A front loader fills a dump truck at the Holcim cement factory near Bloomsdale on Nov. 29.