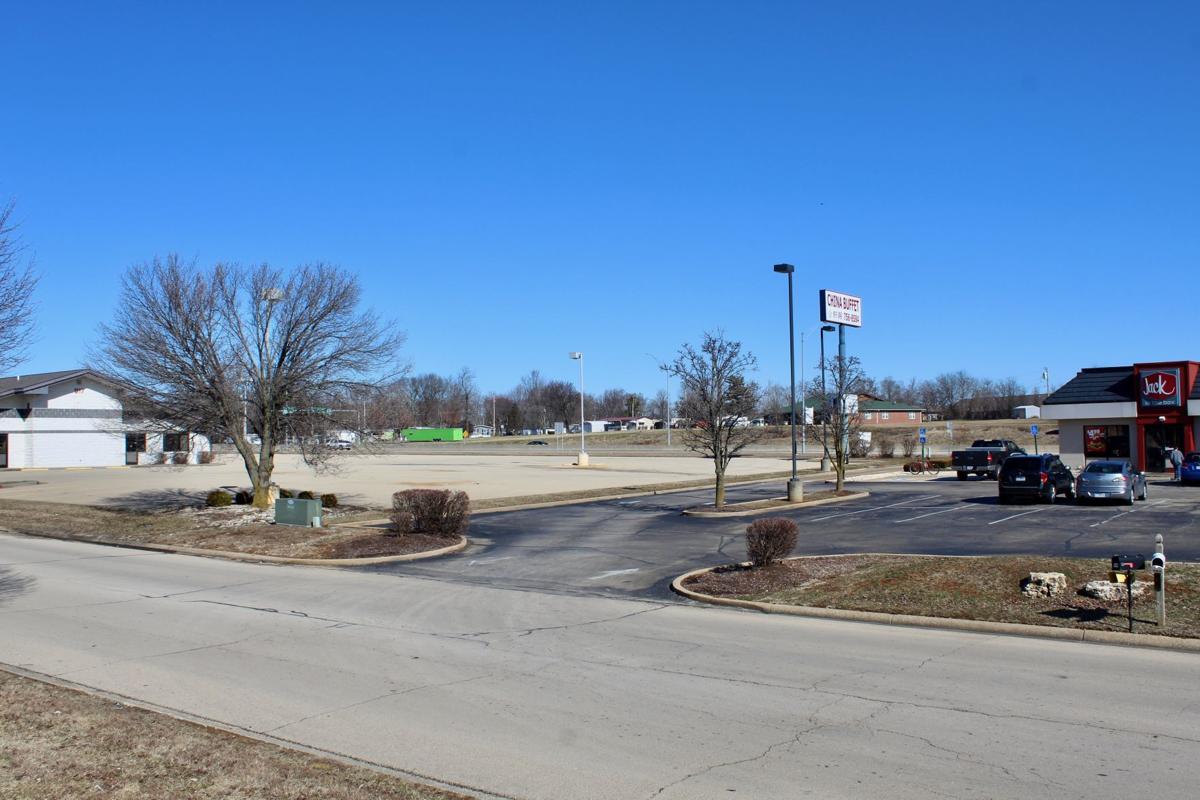 At its Feb. 24 meeting, the Farmington City Council will vote on whether or not to approve a requested boundary adjustment of the former Ryan's restaurant property to allow for construction of a Starbucks. The business would be located between the now vacant building and the Jack In The Box fast-food restaurant on the corner of Valley View Drive and Karsch Boulevard. 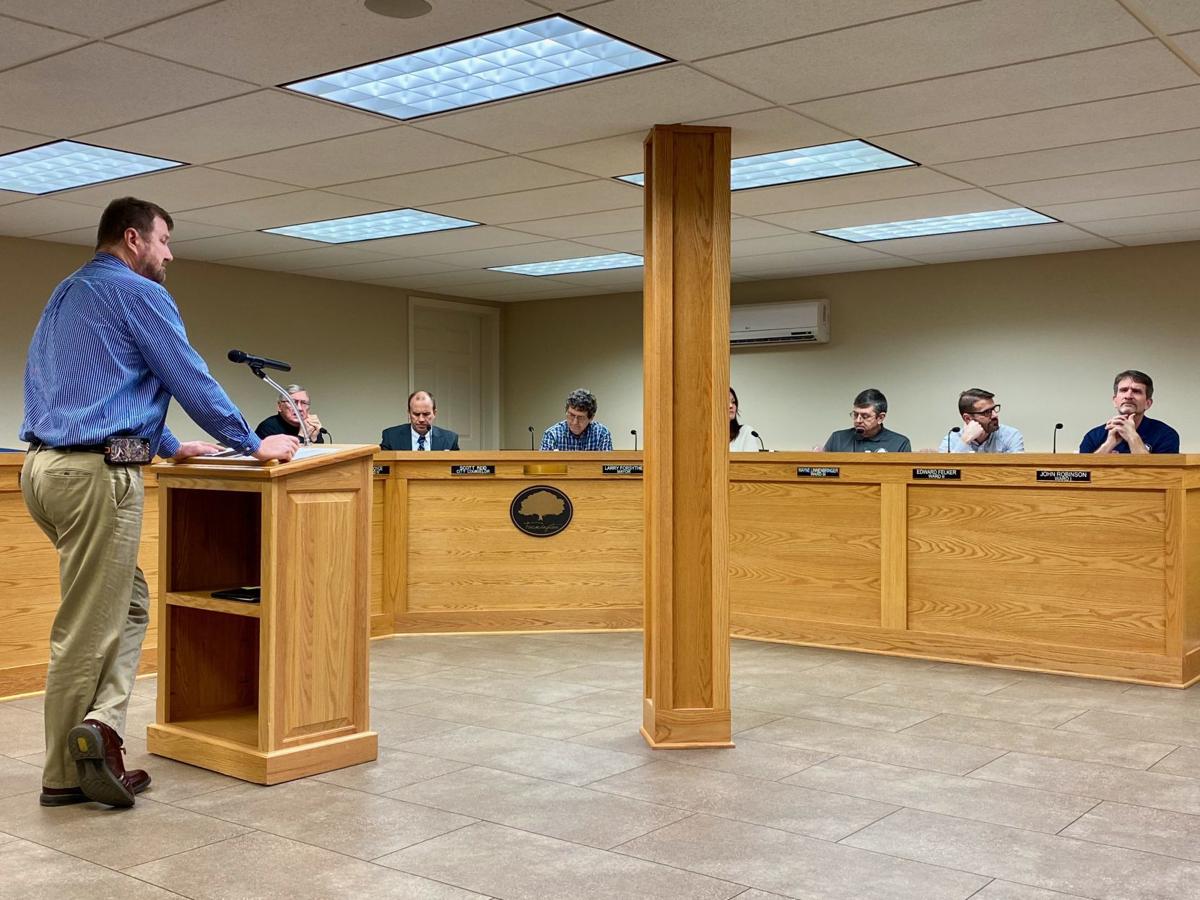 Farmington Development Services Director Tim Porter addresses the city council at its Thursday night meeting during a public meeting held regarding the subdivision of commercial property along Valley Creek Drive for construction of a Starbucks between the former Ryan's restaurant and Jack In The Box.

A public meeting regarding the subdivision of a piece of commercial property on Valley Creek Drive was held without comment during Thursday’s Farmington City Council meeting, marking a crucial step in the construction of a Starbucks on now vacant land that sits between the former China Buffet (previously Ryan’s) building and the Jack in the Box fast food restaurant that faces West Karsch Boulevard.

Rumors of the worldwide coffee restaurant coming to Farmington began in earnest in September when a job listing appeared online for a Starbucks store manager, as well as baristas, to serve at an undisclosed Farmington location. The city of Farmington subsequently confirmed that Starbucks had indeed expressed interest in coming to town.

With the public meeting now out of the way and the first reading of an ordinance acceding to the plat request submitted by GBT Realty Corporation on behalf of Realty Income Corporation, the city council will vote at its Feb. 24 meeting on whether or not to approve the second reading, allowing the ordinance to go into effect.

“The company that owns that lot is a company out of California in the commercial real estate business,” he said. “They’ve owned it for years and it was always leased to Ryan’s and all the other restaurants that were there. It was last year sometime, in the middle of summer, that we started getting hints that something was going on with that property.

“Typically, what will happen it will start with inquiries about things like whether there was ever a gas station there. If there was, were there buried fuel tanks … environmental concerns. But you really don’t know — and that’s pretty typical of the type of inquiries we get here — of who is really interested in it. They keep that stuff pretty close to their chest. They’re not very forthcoming, these people who call.”

Porter said the city provides the inquiring party with whatever information they can to help in their decision.

“We actually got inquiries and then we’re kind of told what the plans were,” he said. “Now it’s public record. The mystery was where exactly it was going to go because the information was something somebody found on a job search site.

"It’s kind of fun whenever you start hearing rumors about where it’s going — and we’re asked to kinda keep it confidential at first, so we just sorta sit back and listen to all the guesses of where it’s going to go.”

According to Porter, there were several commercial properties in the area that would have been suitable for a Starbucks location. Now that the actual location has been selected, all that remains is to gain final approval on the subdividing of the property.

“It’s technically a final record plat, but in reality, it’s a boundary adjustment,” he said. “That shopping center grew fast. Before I think it got totally, formally subdivided, somebody bought up that lot that the old Ryan’s building was on and it never got added into that subdivision.”

Asked what will actually occur should the boundary adjustment be approved by the council, Porter said, “There’s going to be an imaginary line that goes down that lot that’s going to be sold presumably to either Starbucks or an agent who will make an arrangement with them.

"That will be finalized at the next council meeting. I don’t anticipate any problems with it, but we’ve been talking with engineers and developers about the layout and parking lot and size. I think it’s going to be fairly typical of a Starbucks. I haven’t been to a Starbucks that much, but I know that a lot of times you’ll see them like in a strip mall or something like that. I think the commonality of all Starbucks is the drive-through component. They’ve got to have the ability to do that.”

Starbucks will be building from the ground up, giving it the freedom to construct whatever is needed to provide a variety of services for its customers. Meanwhile, the former Ryan’s building will remain unchanged for the immediate future.

“My guess is that you’ll probably see another business, or something go there,” Porter said.

While he isn’t aware of Starbucks' construction timeline, he said conversations have already begun between the state and city with the architects and engineers who will be overseeing the project.

“The firms they use are typically the ones they work with in other parts of the country, so we’re dealing with folks over the phone now, trying to make sure they know things that are important to them, so they can submit their preliminary plans. We looked at the layout of what they proposed for the parking lot. We got input from our city staff because that’s kind of a tricky area there, traffic-wise, if you’re going out. We’re cognizant of that and so is the developer.

“Your patrons may have a difficult time making a left onto Maple Valley Drive, but as long as they understand that, then they can work around it. There’s other ways out. There’s a four-way stop that they can get to, but they may have to drive another 30 seconds to get there.”

Porter said the city is excited about Starbucks coming to the city, but they remain supportive of the current businesses in town that also sell premium coffees and similar food items.

“A lot of people like Starbucks, so if that constitutes progress, that’s a good thing,” he said. “We’ve got several coffee shops here in town that make fine coffee. I’m sure folks will still patronize them. If you like Starbucks, then this is for you, but if not, you have several local coffeehouses that will meet your needs.”

A little bit about Starbucks

Starbucks first became profitable in Seattle in the early 1980s. Despite an initial economic downturn with its expansion into the Midwest and British Columbia in the late 1980s, the company experienced revitalized prosperity with its entry into California in the early 1990s. The company experienced extraordinary growth between 1987 and 2007, when it opened an average of two new Starbucks locations daily.

As the state slowly reopens this week Phase One-style, area hair salons are fielding calls from clients who are enthusiastic about booking app…

At its Feb. 24 meeting, the Farmington City Council will vote on whether or not to approve a requested boundary adjustment of the former Ryan's restaurant property to allow for construction of a Starbucks. The business would be located between the now vacant building and the Jack In The Box fast-food restaurant on the corner of Valley View Drive and Karsch Boulevard.

Farmington Development Services Director Tim Porter addresses the city council at its Thursday night meeting during a public meeting held regarding the subdivision of commercial property along Valley Creek Drive for construction of a Starbucks between the former Ryan's restaurant and Jack In The Box.