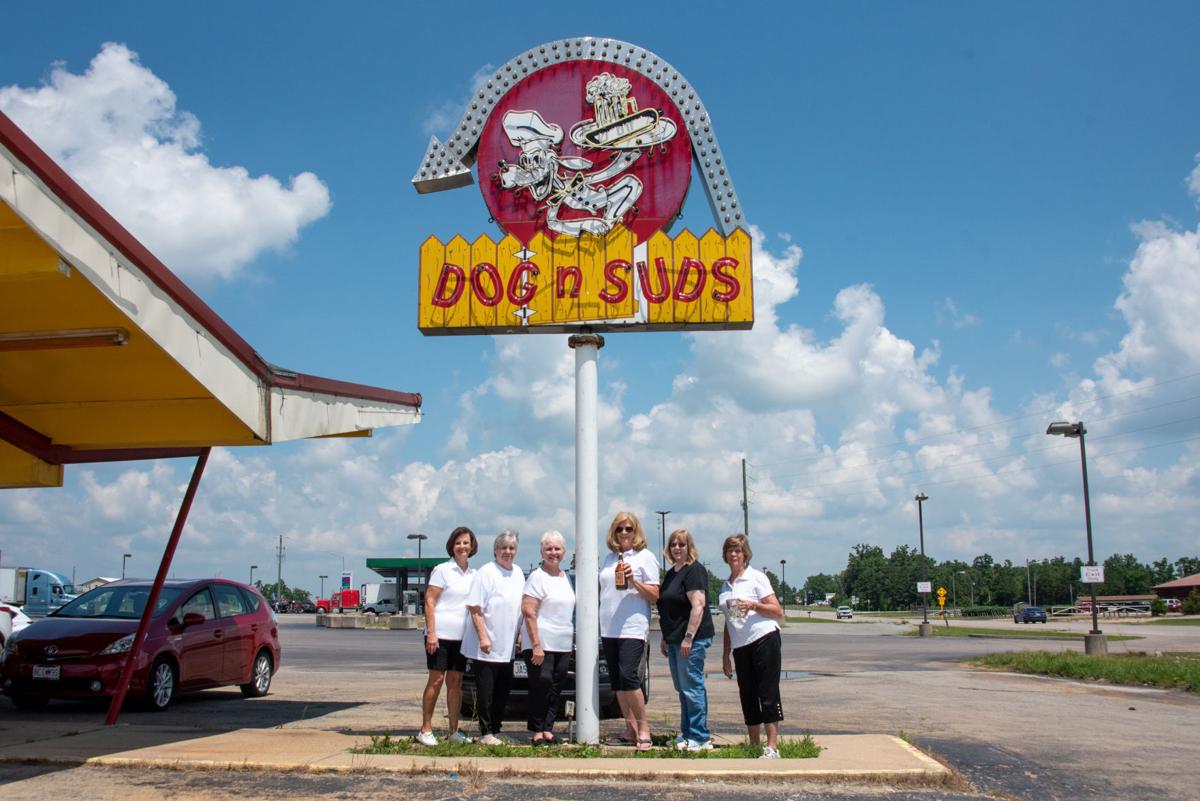 From left, Karen (Jones) Tripp, Karen (Stephens) Stafford, Reva Slinkard, Doris (Link) Young, Brenda Freeland and Ida (Link) Firebaugh return to the Dog n Suds in Cherokee Pass. The six were some of the original carhops when the business first opened. Not pictured are Sara (Radcliff) Francis and Barb Baker. 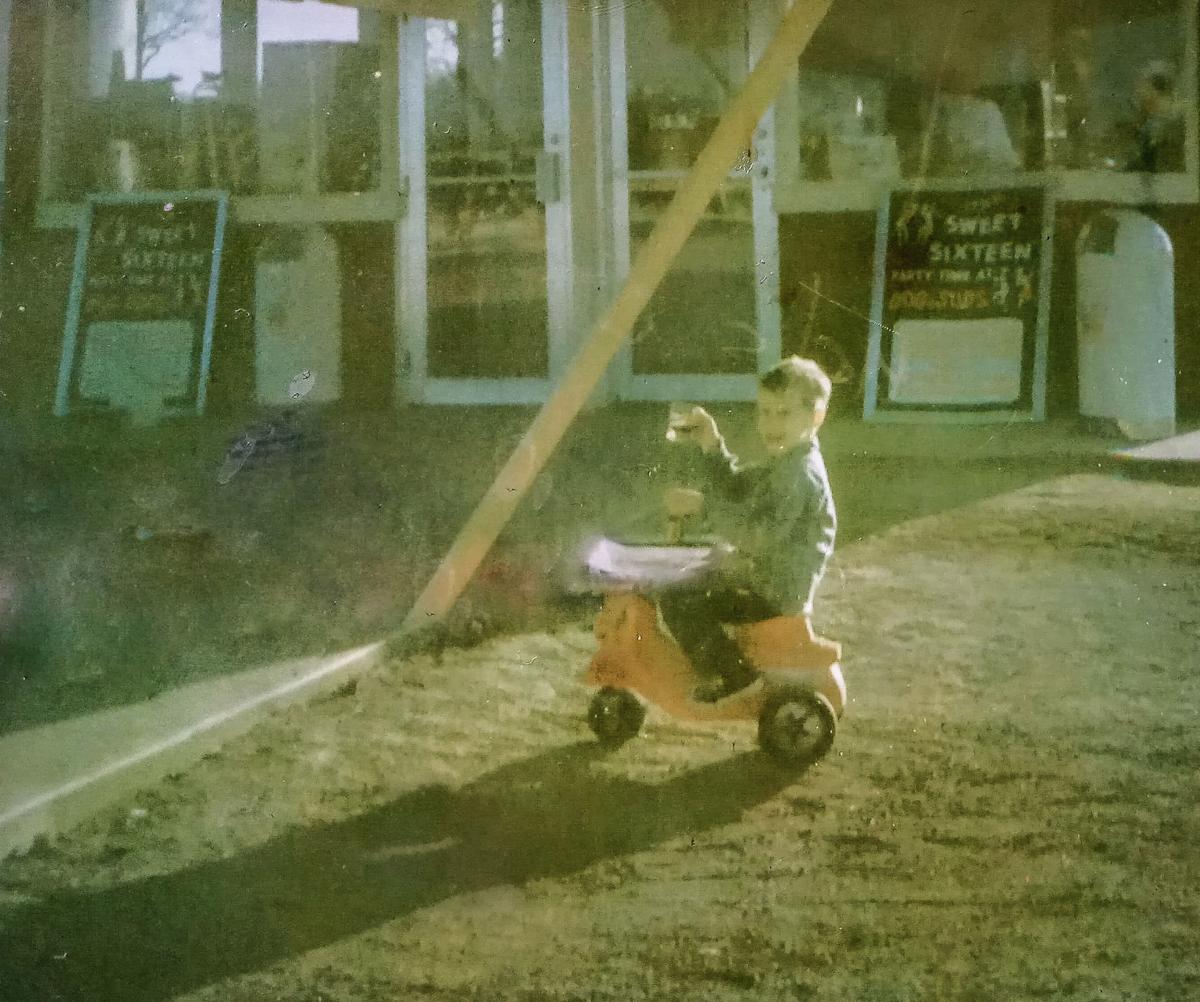 Three year old Steve Stephens rolled up on his tricycle Aug. 15, 1965 to be the very first customer. 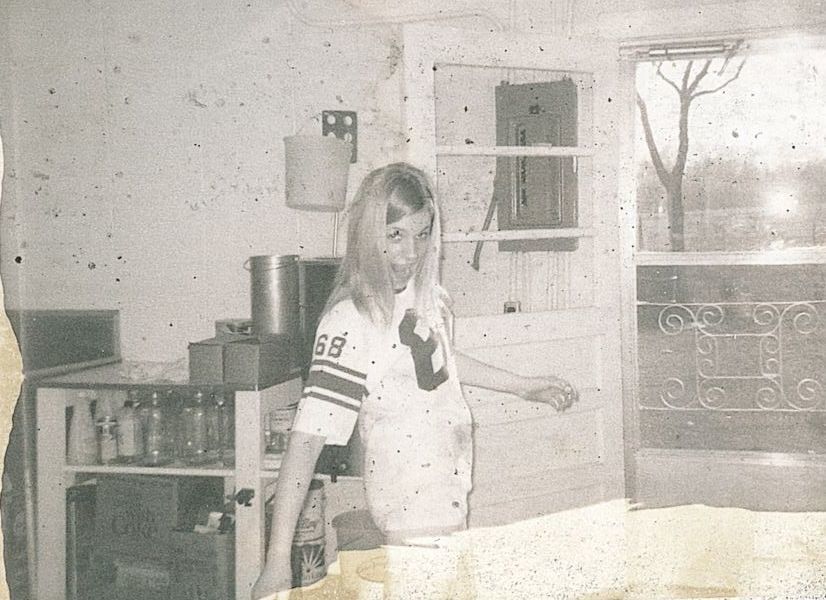 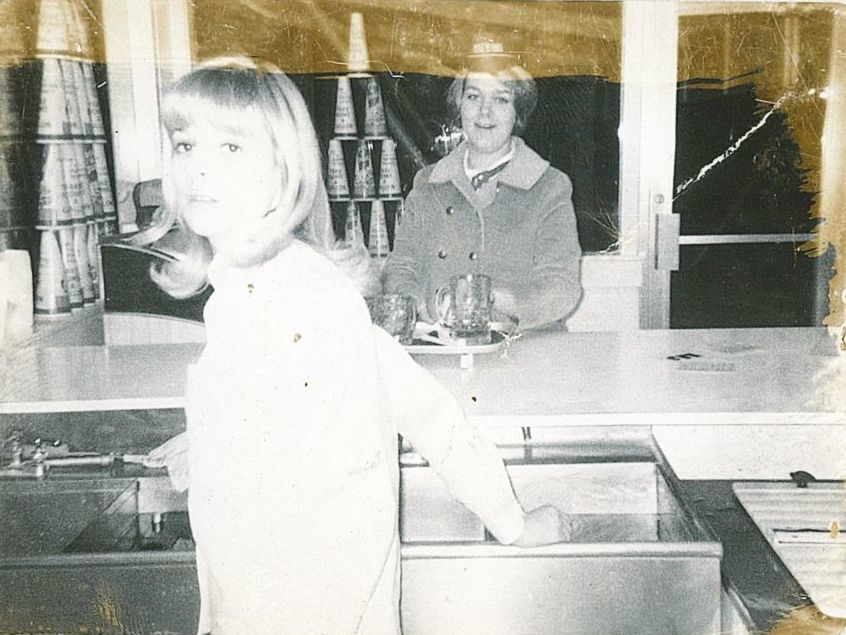 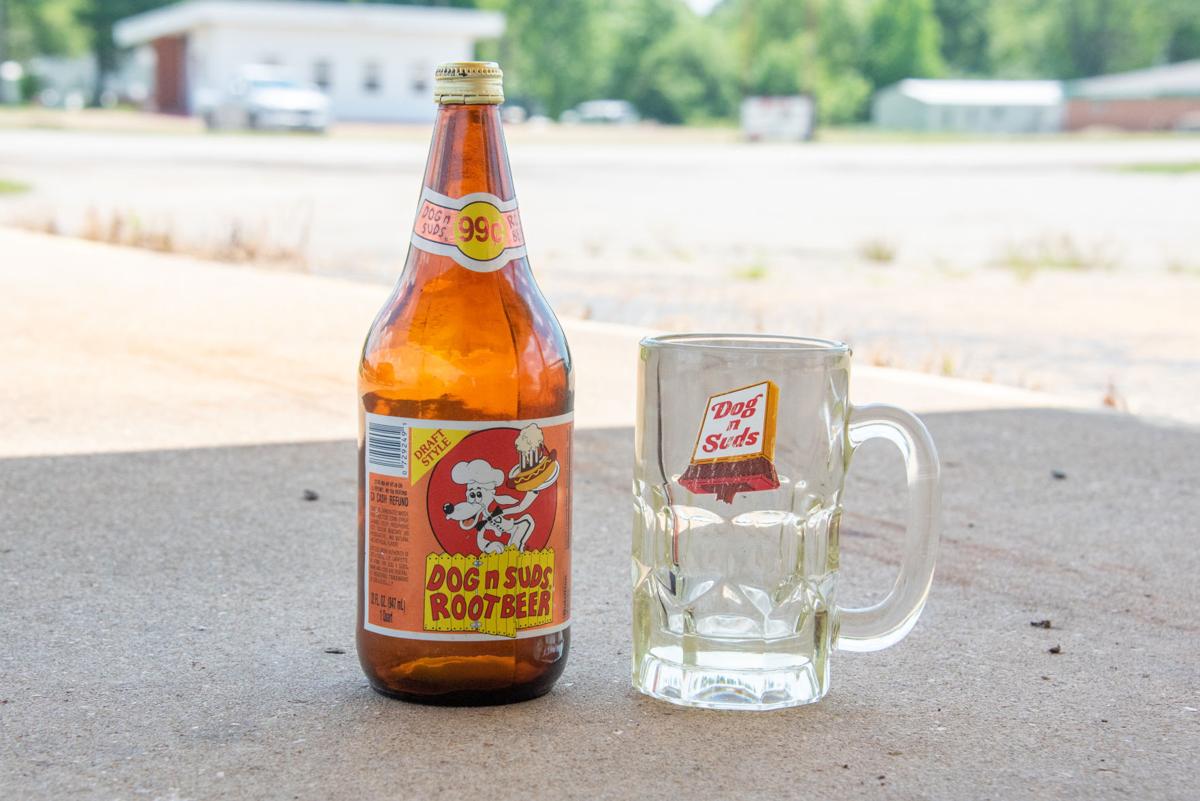 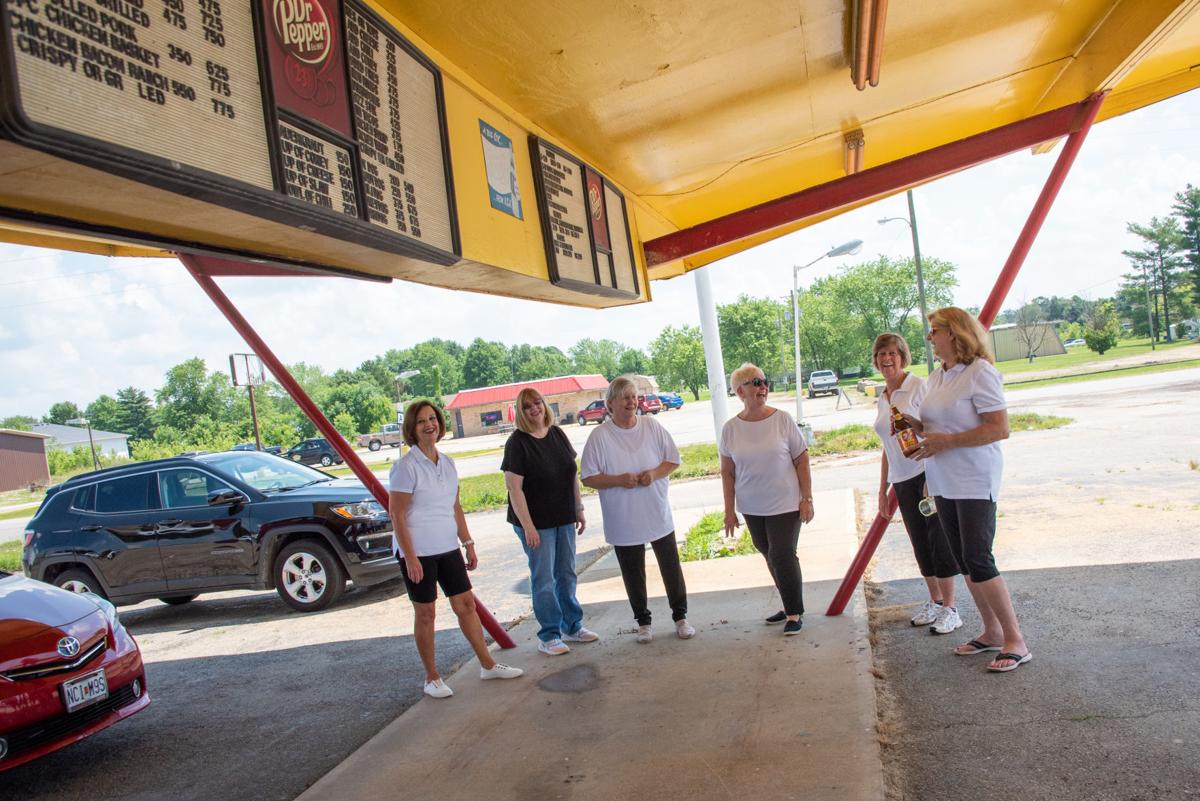 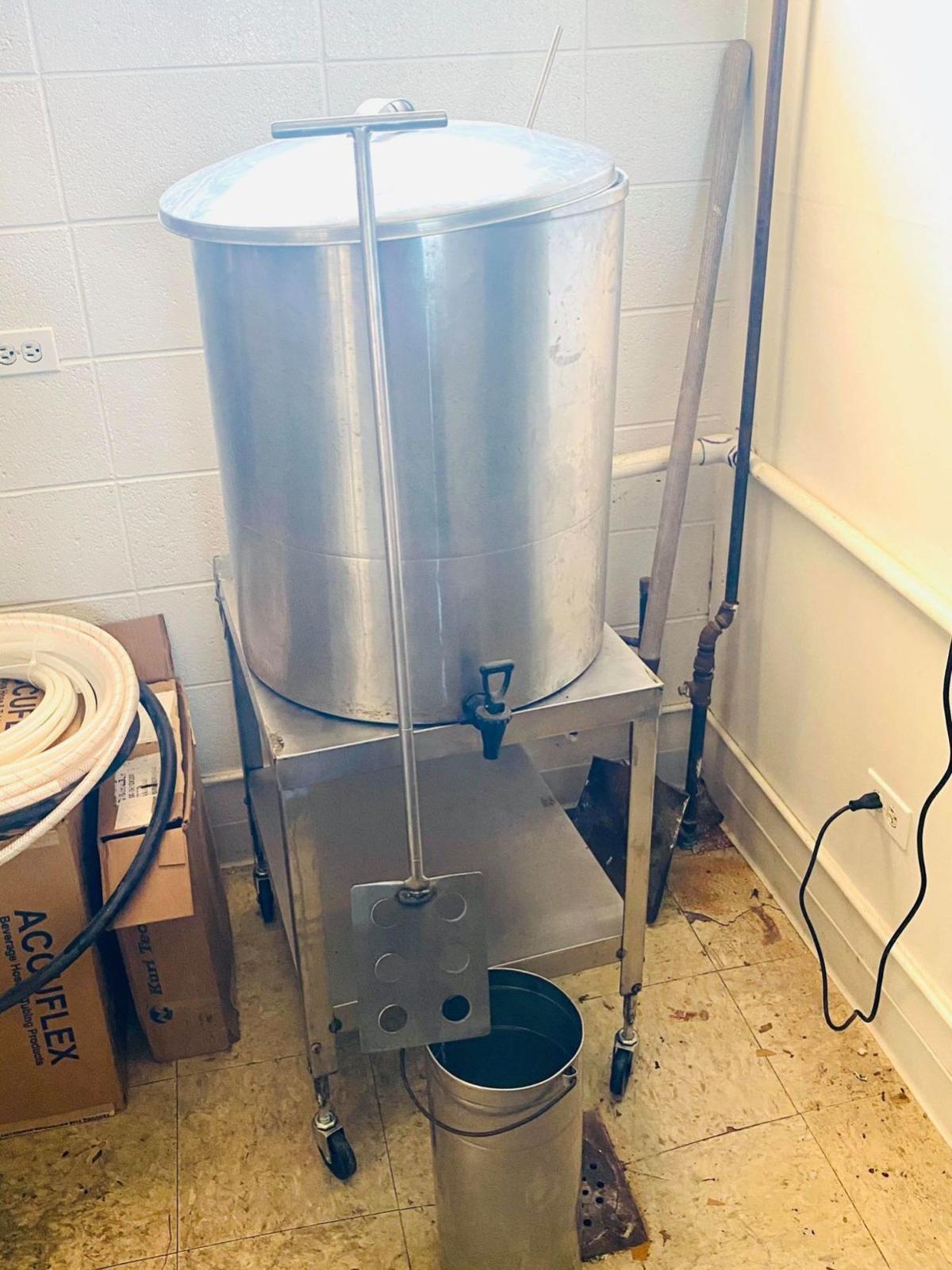 The original Dog n Suds root beer was made at the restaurants in containers like this.

August 15, 1965, Bob and Eulah Stephens opened the Dog n Suds in Cherokee Pass. Their nephew Steve was their first customer, as the three year old rolled up on his tricycle to get a frosted glass of root beer.

Today, the business is just an empty building, full of memories, with plans to be torn down.

They looked back on their times remembering their black skirt, white blouse, black bow tie, red cummerbund and red cap uniforms. The car hops made 50 cents an hour plus tips, if they got any. The famous coney dog and root beer, a favorite among the car hops, would cost you 40 cents.

Tripp said she enjoyed occasionally wearing the "Rover" the mascot outfit and listening to the music playing on the jukebox.

Tripp said it was fun listening to the jukebox with all the music of the sixties and to meet the people who came from St. Louis, Marquand and Fredericktown.

"When you had free time, the guys or girls would get out and lean against their car and then you would talk and hear the music during our free time," Tripp said. "That was something that was always fun. It was always a good time talking to friends when they would come down and visit with us."

"It was a social spot," Stafford said. "Back in the sixties, it wasn't unusual, especially on the holiday weekends, for the lots to be double parked on both sides."

Stafford was one of several who found love during their time working at Dog n Suds. She met, her now husband, Danny in 1966, when she helped him with his car.

"I always worked inside. I always told my brother I didn't want to be a car hop," Stafford said. "Car hops made 50 cents an hour, but I got 75 cents because I wouldn't get tips working inside. So one day, I was working and a car hop came in while I was washing mugs and said there were some boys outside with a flat tire and they wouldn't believe her. I said by golly I'll go out there and help them."

Stafford said that was when she met Danny and his cousin Harry.

"They started coming there all the time after they would get off work and drink coffee," Stafford said. "The rest is history."

This trend repeated itself as history went on as Tripp's younger sister Connie (Jones) Huffman met her husband Kim of Marquand while she worked at Dog n Suds a few years later. The two have been married 46 years.

"Karen, Connie and Sara all met their husbands there," Tripp said. "It must have been good luck because they are all still married."

Over the years Dog n Suds served as a place of employment for many of Bob and Eulah's family members and the property is still owned by their son Tom Stephens.

"When the highway changed, it just kind of messed everything up," Stafford said. "I think it will eventually get bought and torn down."

The building is just that, a building. The memories and the relationships that were created will live forever in the hearts of those who were part of the Dog n Suds history.

Tripp said she remembers her two oldest nephews visiting from Jefferson City and enjoying Dog n Suds because their Aunts Karen and Connie worked there.

"Years later, when they had children of their own, they would always make sure that they would take them to the Dog n Suds and share the same memories with them," Tripp said. "Karen (Stafford)'s grandchildren did the same thing."

The original car hops have made an effort to keep in touch over the years. Whether they are connected by their family tree or not, they see themselves as a family.

"This was a first job for so many of us as teenagers," Tripp said. "We made so many special memories there. It will certainly be missed by so many of us."

The long time friends will continue to get together every month for lunch but will have to choose another restaurant because the place "where everything is so dog gone good" will soon be a parking lot.

Madison Countians had one contested local race on the Aug. 4 primary ballot.

The prom that almost wasn't

This year has been filled with uncertainty and cancellations, but for one night, the Fredericktown Classes of 2020 and 2021 were able to take …

Mask up at Madison County Courthouse

The Madison County Courthouse, in compliance with a modification made to the Missouri Supreme Court Operational Directive, is now requiring ma…

A Fredericktown juvenile was killed July 25 in a vehicle accident in Madison County.

The Fredericktown City Council passed a proclamation before its regular bi-monthly meeting, July 27.

Going to the drive-in

A big screen, a starry sky and the rolling hills of Madison County are just a few of the highlights of being out at Little River Farm People f…

Philip Mayabb of Cape Girardeau and Trudy Finch of Jackson would like to announce the engagement of their daughter, Kaitlyn Paige Mayabb to Jo…

From left, Karen (Jones) Tripp, Karen (Stephens) Stafford, Reva Slinkard, Doris (Link) Young, Brenda Freeland and Ida (Link) Firebaugh return to the Dog n Suds in Cherokee Pass. The six were some of the original carhops when the business first opened. Not pictured are Sara (Radcliff) Francis and Barb Baker.

Three year old Steve Stephens rolled up on his tricycle Aug. 15, 1965 to be the very first customer.

The original Dog n Suds root beer was made at the restaurants in containers like this.