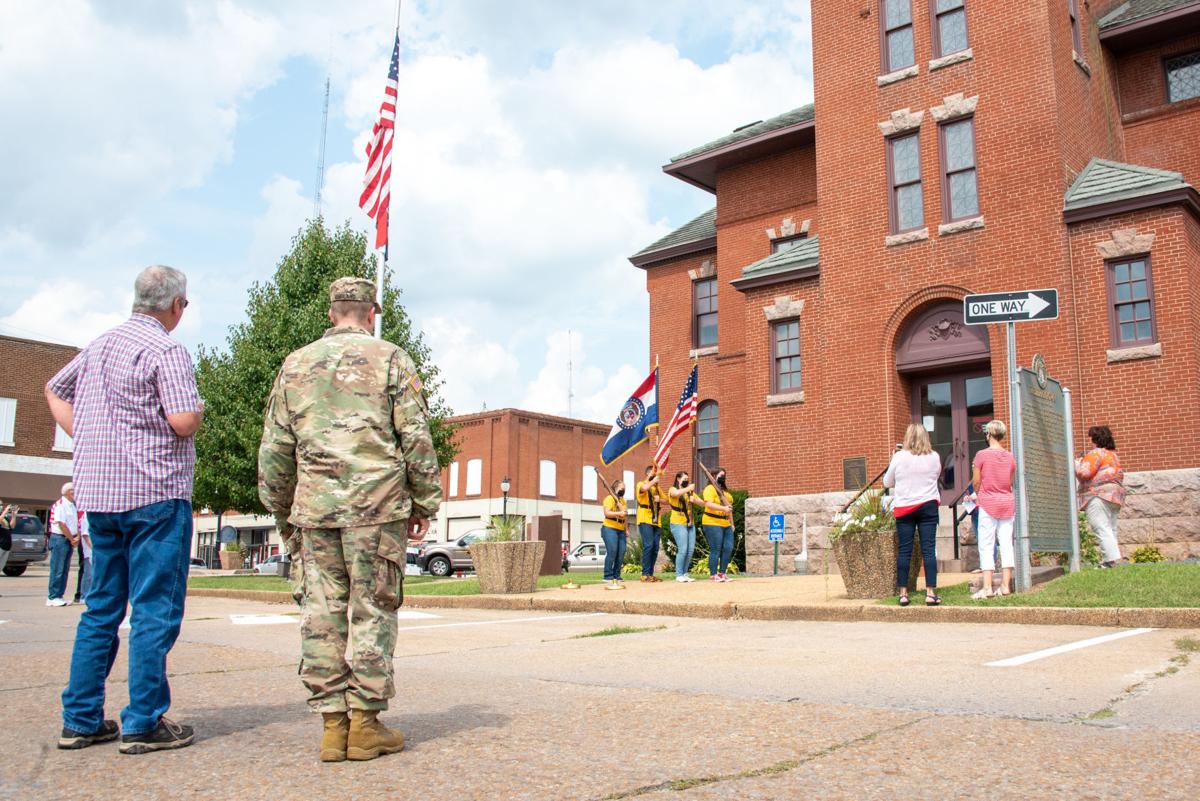 Those in attendance at the Patriot Day Ceremony, Sept. 11 at the Madison County Courthouse stand in respect as the Fredericktown JROTC presents the colors. 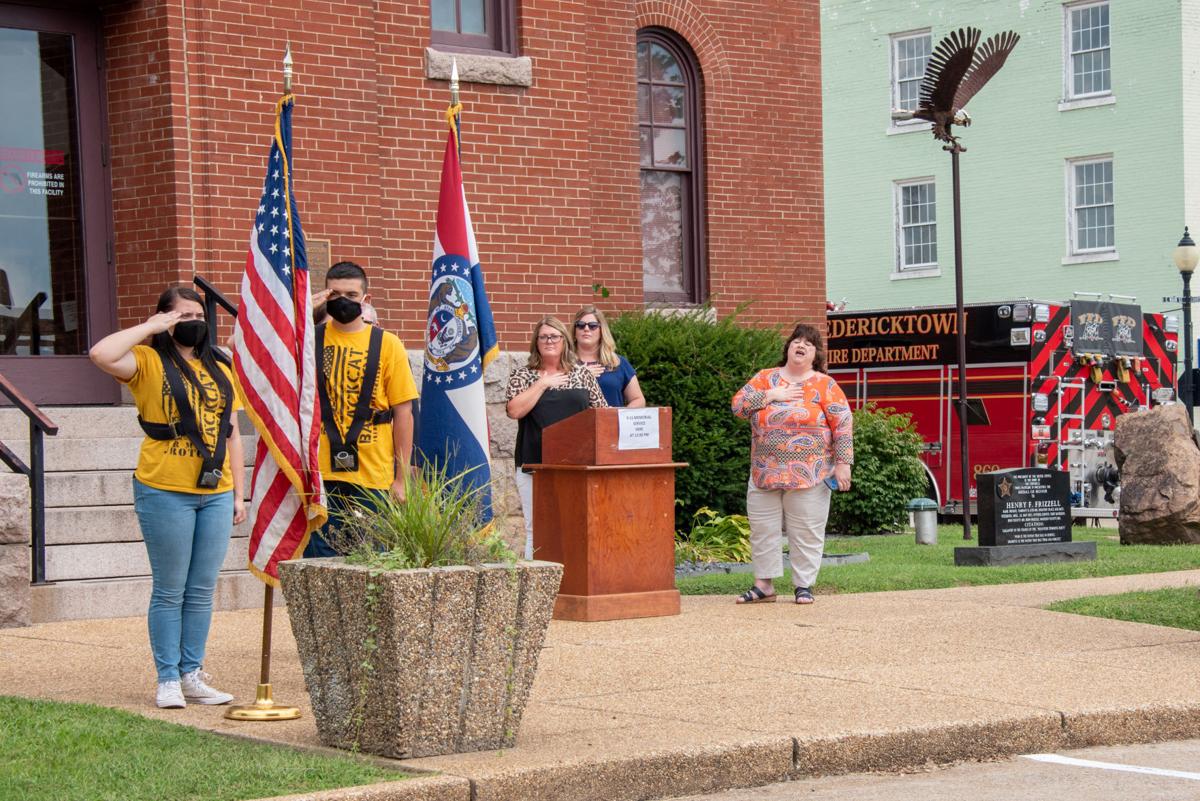 Barb Huffman sings the National Anthem at the 2020 Patriot Day Ceremony in Fredericktown.

Do you remember where you were when the first tower was hit Sept. 11 2001? What about when the second one was hit? Were you glued to the television watching or were you too young to understand?

"I was working midnights and I remember my mom calling me going 'turn on the TV, turn on the TV now,'" Madison County Sheriff Katy McCutcheon said. "I had just got home at 7 a.m. and I ended up watching all day long. In fact when I went to work that night I watching it."

McCutcheon said it was like days on end everyone was glued to their television.

"I was actually working, I remember it very well," Cherokee Pass Fire Chief Bill Starkey said. "They said something on the radio when the first plane hit and I went inside and watched it. I watched the plane hit the second one. They were televising it actually."

Starkey said, when the second plane hit, they showed all the firemen and stuff running on TV.

"I felt for the people going in, because when it started going down, I knew it was over for them," Starkey said. "There was no way that anybody could come out of anything like that, and once it started dominoing down from the top...I remember very well."

Starkey said the first responders did not give it a second thought when they ran into those buildings.

"As a fireman you just do it and go on," Starkey said. "You try to watch for stuff, but who knew that building was going to collapse. They were trying to get the people out of it."

Fredericktown Fire Chief John Clark said he was sitting at Gifford Lumber working when it happened. He said you could not hardly get any service 19 years ago, so someone went home and phoned in updates.

Clark said, as a firefighter, he and all his crew would have ran into those buildings to help, but being at home, there was no way he could relate to what they experienced.

"I cannot imagine what those guys went through when those buildings started coming down and there was no where to go," Clark said. "I just can't imagine. I remember reading later there was one department up there that was 19 guys, 18 of them died. Only one lived. I cannot relate to what those guys went through and I don't think anyone can really."

Clark said everyone was in shock when the buildings fell. He said they were on fire, but nobody expected them to come down. He said he remembers all the gas stations in town were full of people filling up their tanks thinking the world was coming to an end.

"I was working at the Ste. Gen. County Sheriff's Department, but I wasn't on duty that day," Fredericktown Police Chief Eric Hovis said. "I was at the MAC campus finishing up my degree and I remember walking out of class and seeing huge crowds around the TVs."

Hovis said, as soon as he saw what was happening, his first reaction was to get in his car and go straight to work.

"I wasn’t on duty, but I went straight there," Hovis said. "Everybody was in shock. They thought it was an accident, and they quickly started finding out this was an attack, when the plane crashed in the field and the one hit the pentagon. So, it was like oh yeah this is an attack. Everybody went from a yellow straight to a red."

Hovis said there were a lot of firemen and police running in to help while everyone else was running away.

"How quickly people forget that you may have gotten a speeding ticket or ticket for your license being expired from that cop you think is just a jerk, but that's the same cop that is going to come running to help," Hovis said. "They don't run away from scary bad things or problems. We run to them."

Hovis said after 9/11 the nation came together and swore to never forget what happened.

"There are generations, like my six year old, she just found out about it and was literally in tears," Hovis said. "She had no clue it even went on. We forget, unless it's taught, we don't know."

Many came out this Sept. 11, to be a part of the Madison County tradition of gathering around the court square to hear the story of the events of that day 19 years ago and to honor the country's brave first responders.

Madison County Deputy Collector Sarah Garcia told the story of the 19 militants associated with the Islamic extremist group Al-Qaida and the four airplanes they hijacked in order to carry out suicide attacks against the United States.

Garcia said many people were instantly killed or trapped in those buildings.

"First responders were quickly on the scene, but many perished in the fire and collapse of the buildings," Garcia said. "At 9:45 a.m., as many of us watched those towers crumbling to the ground, another plane, American Airlines Flight 77, crashed into the west side of the Pentagon in Washington D.C., killing 125 military personnel along with 64 people aboard the airliner."

Garcia said, 40 minutes later the fourth plane, United Airlines Flight 93, crashed into a field in Shanksville, Pennsylvania after some of the passengers and crew overpowered the hijackers.

"There were a total of 2,996 killed in the attacks, including 19 terrorist hijackers aboard the four airplanes," Garcia said. "Several first responders have died since the attacks due to complications of wounds, smoke inhalation and PTSD."

"Bin Laden was found and killed in Pakistan on May 2, 2011," Garcia said. "Al-Qaida and the Taliban has diminished but still exists. The war on terrorism continues even today, eighteen years later."

Garcia said, on Dec. 18, 2001 Congress approved naming Sept. 11 as Patriot Day to commemorate the anniversary of the 9/11 attacks. She said, in 2019 Congress also declared Sept. 11 as National Day of Service and Remembrance.

The crowd was hushed as everyone remembered where they were and what they were doing during that moment in 2001. A grateful appreciation for the first responders, both around the country and standing among the crowd, could be felt as Madison County Clerk Don Firebaugh took to the podium to end with a poem, by Roger J. Robicheau, and prayer.

"We mourn their loss this day, this year," Firebaugh said. "Those now with God, no danger near. So many loved ones left do stand, confronting loss throughout our land. I firmly pray for peace of mind, dear God please help each one to find. And to our soldiers now at war, God guide above, at sea, on shore. One final thought comes clear to me, for what must live in infamy. Absolutely, we'll remember, the eleventh of September."

Firebaugh said a Christian prayer, placing the thousands of innocent lives lost on that unforgettable day into the loving arms of God. He said we will always remember the courage of the countless men and women who put their lives at risk in order to rescue, alleviate and bring solace to the afflicted.

The Fredericktown R-I School Board recognized one of the district's exceptional teachers, Sept. 15.

For six months, the Federal Emergency Management Agency (FEMA) has been partnering with the U.S. Department of Health and Human Services, (HHS…

Monday, A&M Restaurant celebrated 30 years in business. Mother and daughters Vicky Manche and Jackie Griffith and Bobbie Schoonover have b…

In March 2020, a new normal crept across the country as schools shifted to online learning, teleworking became commonplace, and businesses fou…

The year of 2020 has been a challenge, but one thing it has provided is a new appreciation for outdoor areas. Families are spending more time …

Those in attendance at the Patriot Day Ceremony, Sept. 11 at the Madison County Courthouse stand in respect as the Fredericktown JROTC presents the colors.

Barb Huffman sings the National Anthem at the 2020 Patriot Day Ceremony in Fredericktown.