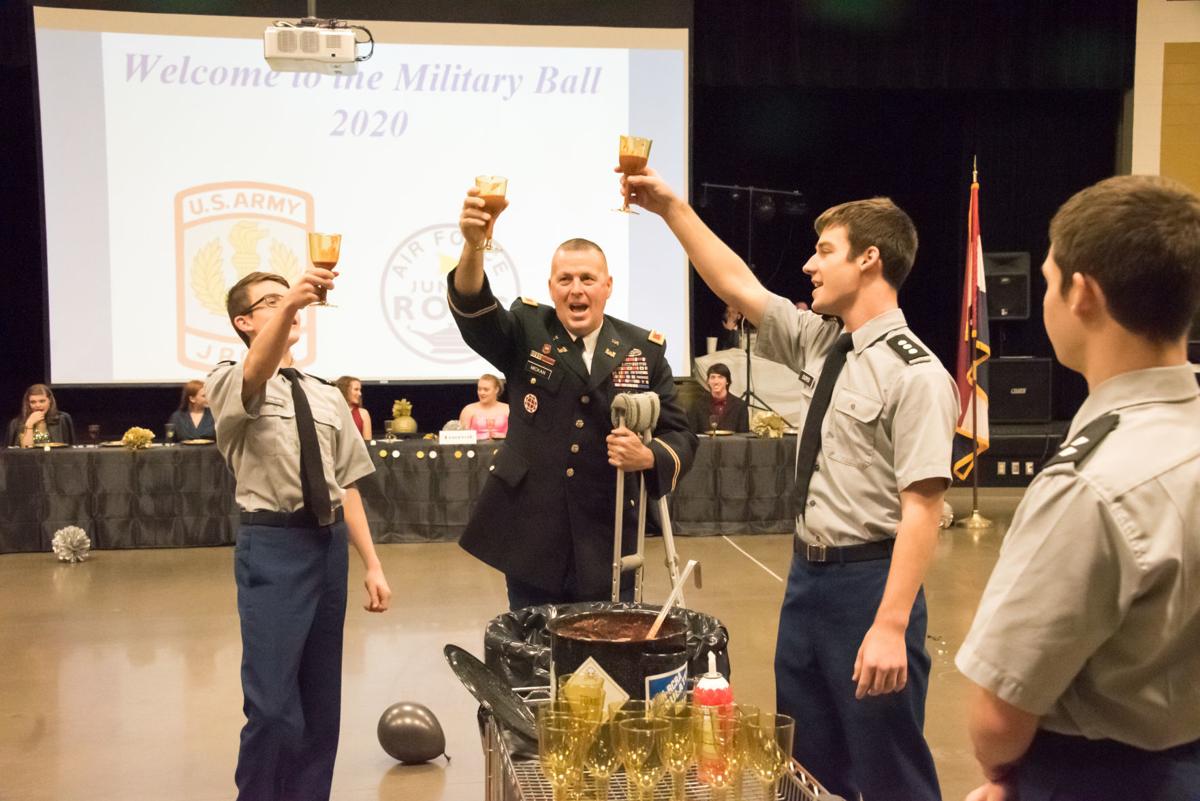 Left to right, Cadet Eli England, Missouri Army National Guard Chief of Staff Colonel Christopher Mickan and Cadet Captain Aaron Cooper raise a glass "to the mess" before they drink the grog. Battalion Commander Caleb Cooper looks on, as he will drink his later. 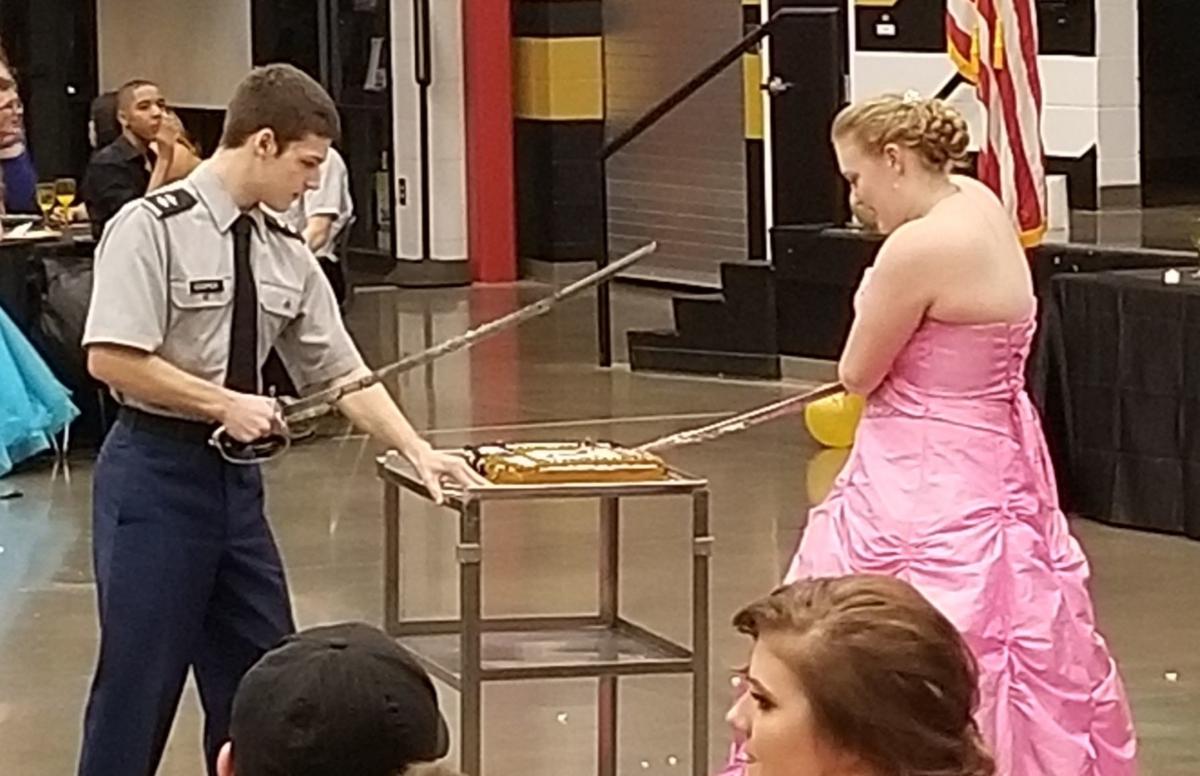 It has become a tradition as Fredericktown's JROTC program extends an invite every year to its rivals in Farmington.

This year's theme was "The Roaring Twenties" and the cafetorium at Kelly A. Burlison Middle School was filled with classy black and gold decor.

"Everything else we do, interschool, is probably competition based, baseball, football, basketball." Farmington Col. Daniel Sparks said. "This is just for fun. We all have similar values and certainly similar backgrounds but now they come together."

Sparks said these are good kids having clean fun with no alcohol, no drugs and no tobacco, just kids having fun being kids.

"It's a great sight to see young adults like yourself out here doing great things for this school as well as for the community," Mickan said. "I didn't have the opportunity to do all that when I was growing up."

Mickan grew up and went to school in Arcadia Valley, just 15 miles from Fredericktown. He said he was not the best student, but he loved to run and ended up running in college at Southeast Missouri State.

After obtaining his Bachelor's Degree in Industrial Technology and Marketing, Mickan said he found himself driving a forklift and not even using his degree.

"I had a college degree while driving a forklift," Mickan said. "So when you get out of college you think 'man a piece of paper means something.'"

Mickan said he had to start from the bottom and work his way up until he became plant supervisor. This is the point where Mickan's story took a different path.

After a long talk with his wife, Tonya, he had agreed to take a job with the National Guard. He said he took a pay cut, but they made the decision together and the rest was history.

"A lot of individuals look at life in a sense of money and what am I going to make the most money doing," Mickan said. "If you are happy and you have enough money that you are making, all the money in the world isn't going to make you happy, you are just going to spend more."

Mickan said he found what made him happy and invested himself into his career with the military.

"I've invested in my life and what I've done my children have followed behind me," Mickan said. "My son is currently in Baghdad, my oldest son, he's an MP (Military Police). He's going around and escorting dignitaries out of the embassies."

Mickan said it is important to build friendships throughout the stages of your life and never forget them. He said to remember the friends with you right now and never forget where home is.

Mickan said being competitive is good but building friendships is even better.

Fredericktown JROTC LTC John Francis agreed with Mickan saying to find something you enjoy doing regardless of if its in a military field. He said JROTC is about being where you need to be.

Francis said we try to give you the tools of leadership, discipline and community service to try and make leaders who an organization will want to hire and to be part of their team.

Sparks spoke of one cadet in particular who exemplified why he continues to teach after his retirement.

"The last kid (Farmington Cadet Mathew Jordan) that had the grog, his story is that he was always smart but in the background, never wanting to lead, never wanting to step out," Sparks said. "This year he's gotten better. He's a junior this year and he wants to be a commander next year."

Sparks said, at the beginning of the school year, the cadet realized he needed to step up his game and voluntarily be more involved.

"Smart kid, nice kid, he's got the world in front of him, but he's maximizing his potential because he wants to not because someone is making him," Sparks said. "That's why I do it. I tell the kids, don't get me wrong the paycheck is nice, but I did my thing. I want to show them what they can do and that's why I go in every day."

Left to right, Cadet Eli England, Missouri Army National Guard Chief of Staff Colonel Christopher Mickan and Cadet Captain Aaron Cooper raise a glass "to the mess" before they drink the grog. Battalion Commander Caleb Cooper looks on, as he will drink his later.