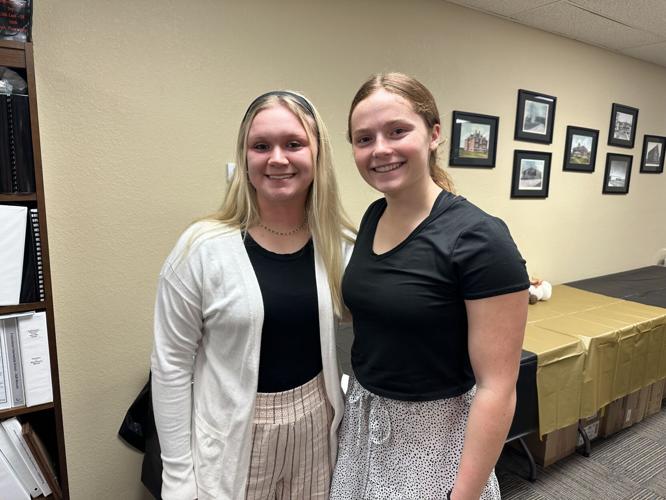 Fredericktown High School students Gabbie McFadden and Ava Penuel are recognized for their soccer accomplishments, during the Nov. 10 Fredericktown R-I School Board meeting. 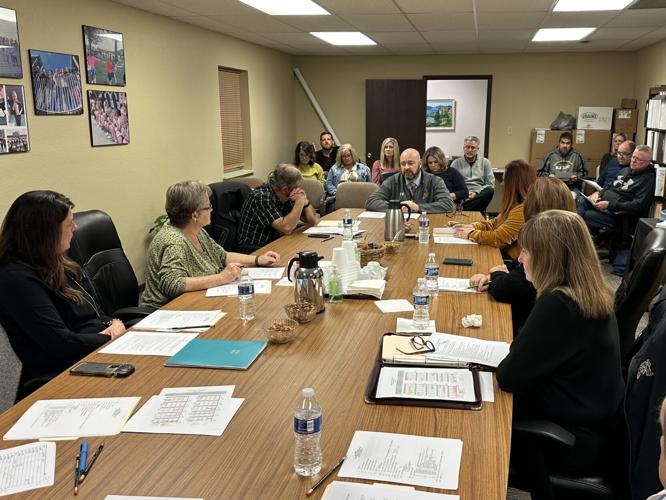 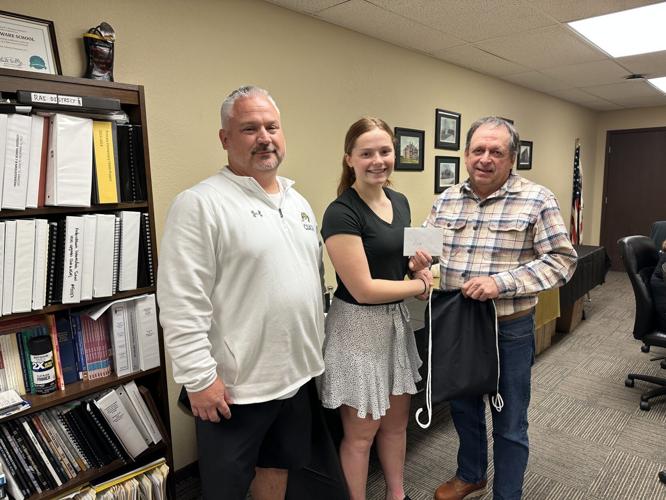 Ava Penuel, center, is recognized by the Fredericktown R-I School Board during the Nov. 10 meeting. Pictured from left, are FHS Girl's Soccer Coach DJ McFadden, Penuel and School Board President Richard Allgier. 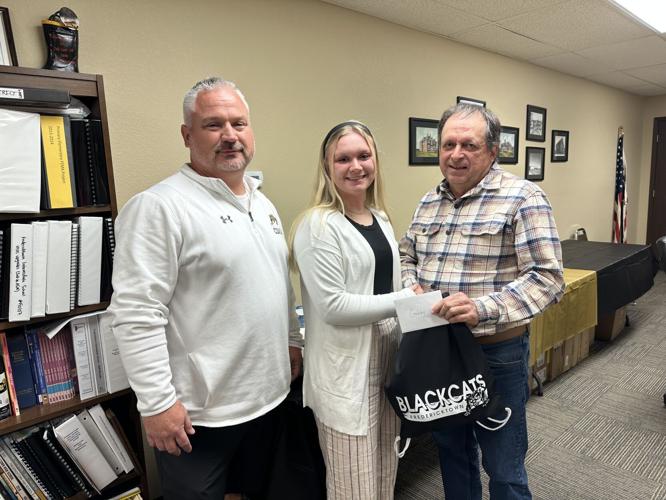 Gabbie McFadden, center, is recognized by the Fredericktown R-I School Board during the Nov. 10 meeting. Pictured from left, are FHS Girl's Soccer Coach DJ McFadden, Penuel and School Board President Richard Allgier.

The Fredericktown R-I School Board was visited by two student athletes during its regular meeting, Nov. 10.

“Our spring soccer season, we had a very, very successful year,” FHS girls soccer coach DJ McFadden said. “We made it to the district championship for the first time ever. Ava (Penuel) and Gabbie (McFadden) were very instrumental in that. In 19 years, our program has had four girls make all state, three of them were from that team last year. That is quite the accomplishment.”

“Their all around player production is amazing,” Coach McFadden said. “They are tremendous young ladies.”

Both Ava and Gabbie are dedicated both on and off the field. They each carry a full work load of college level courses on top of keeping up with multiple sports.

McFadden said, he is extremely proud of both girls as a coach and as a teacher. He said he is looking forward to the next two soccer seasons.

“These two are kind of our work horses in the trenches, in midfield. Ava is a little more the offensive player. Gabbie is more of the defensive player, but those two together I’ll take them into any battle that we’ve got when they are in midfield,” Coach McFadden said.

Coach McFadden said, the soccer team has a rough schedule playing 20-25 games in about 2 months. He said, it is difficult and these two girls are amazingly tough.

“They just really work to be the best they can be, and I’m super proud of what they have accomplished,” Coach McFadden said. “To have three girls make the all-state team is something to be proud of. We didn’t get out of the districts, but other coaches recognized what we have and what these two can do. I think they deserve to be honored for that.”

Coach McFadden also spoke about 2022 FHS graduate Alivia Buxton, who could not be at the meeting.

“Alivia had just an outstanding senior season,” Coach McFadden said. “I bragged on her tremendously last time she was here. She made first team all-state, player of the year for class two, offensive player of the year. I felt like she deserved to make all midwest or all-american but somehow she ended up short of that. I think my case was backed up by the fact that she is starting on a division one team that is playing in the NCAA tournament. That is why she is not here. She has had a successful freshman (college) year, and we are just extremely proud of what she had done.”

Coach McFadden said, as a high school player, he would be surprised if any of Buxton’s records are touched.

“The only ones who might come close would be defensively and that is the two young ladies sitting here,” Coach McFadden said.

“We are proud of you,” Superintendent Chadd Starkey said. “We enjoy watching you play and look forward to the rest of your career. We’ve been getting to see clips of Alivia playing. We are super proud of her and looking on the roster seeing Fredericktown, Missouri, how about that.”

In other business, Assistant Superintendent Shannon Henson discussed safety procedures of the district.

Henson said, he is willing to talk about how the district handles its security, but some things really can not be shared.

“A lot of people will ask, ‘what are the extra precautions,’ well we don’t want to play our hand too much on a lot of things because we feel like if there is somebody out there that wants to do harm to our staff, or students, or people in our community, the less they know the better,” Henson said.

Henson said, the toolkit is used to evaluate anything from a very vague general threat to someone saying they are going to come to school and harm people. He said, it is a good resource and comes from the U.S. Secret Service, the FBI, U.S. Department of Education, the Colorado School Safety Association and MSBA.

“A lot of this is we are asking for faith from the community that we are going to do the right steps,” Henson said. “We develop a reentry plan and a safety plan with those kids most of the time. A lot of people think, ‘if a kid threatens the school, why are they allowed to come back.’ I would rather have an eye on them then have them out there suspended and not know where they are at.”

Henson said, if a kid does something that is directly criminal, and there is clear intent, the hope is outside agencies and the justice system would keep the student away. He said, at the same time, he thinks it is good to get to the bottom of why a kid would say something like that.

“We are going to take every threat seriously,” Henson said. “Honestly, I am glad I am the one in charge of this. I want it to be done right. I have three kids in this district. I want them to be safe as well.”

Henson said, he believes the district’s greatest safety resource is its School Resource Officers. He then thanked the board for supporting the hiring of a fourth SRO.

“We feel trained law enforcement personnel on our campus is the best safety measure we have, and we are very fortunate to have them,” Henson said. “Safety is the number one thing, everyday. It always has to be in the front of your mind. If you see something, say something.”

Henson encourages any people with questions about what the district does, would like to provide feedback, or have a discussion, they can reach him at the district offices.

The next meeting of the Fredericktown R-I School Board will be at 5:30 p.m., Dec. 20 at the district offices.

Shoppers came out and filled the local shops for Small Business Saturday, Nov. 26.

This year, Fredericktown Elementary has placed an emphasis on improving its character education program.

'How old are the St. Francois Mountains anyway?'

Dr. Russell Myers, an economic geologist, visited the Fredericktown branch of the Ozark Regional Library, Nov. 22, to give a two-part presenta…

Fredericktown High School students Gabbie McFadden and Ava Penuel are recognized for their soccer accomplishments, during the Nov. 10 Fredericktown R-I School Board meeting.

Ava Penuel, center, is recognized by the Fredericktown R-I School Board during the Nov. 10 meeting. Pictured from left, are FHS Girl's Soccer Coach DJ McFadden, Penuel and School Board President Richard Allgier.

Gabbie McFadden, center, is recognized by the Fredericktown R-I School Board during the Nov. 10 meeting. Pictured from left, are FHS Girl's Soccer Coach DJ McFadden, Penuel and School Board President Richard Allgier.