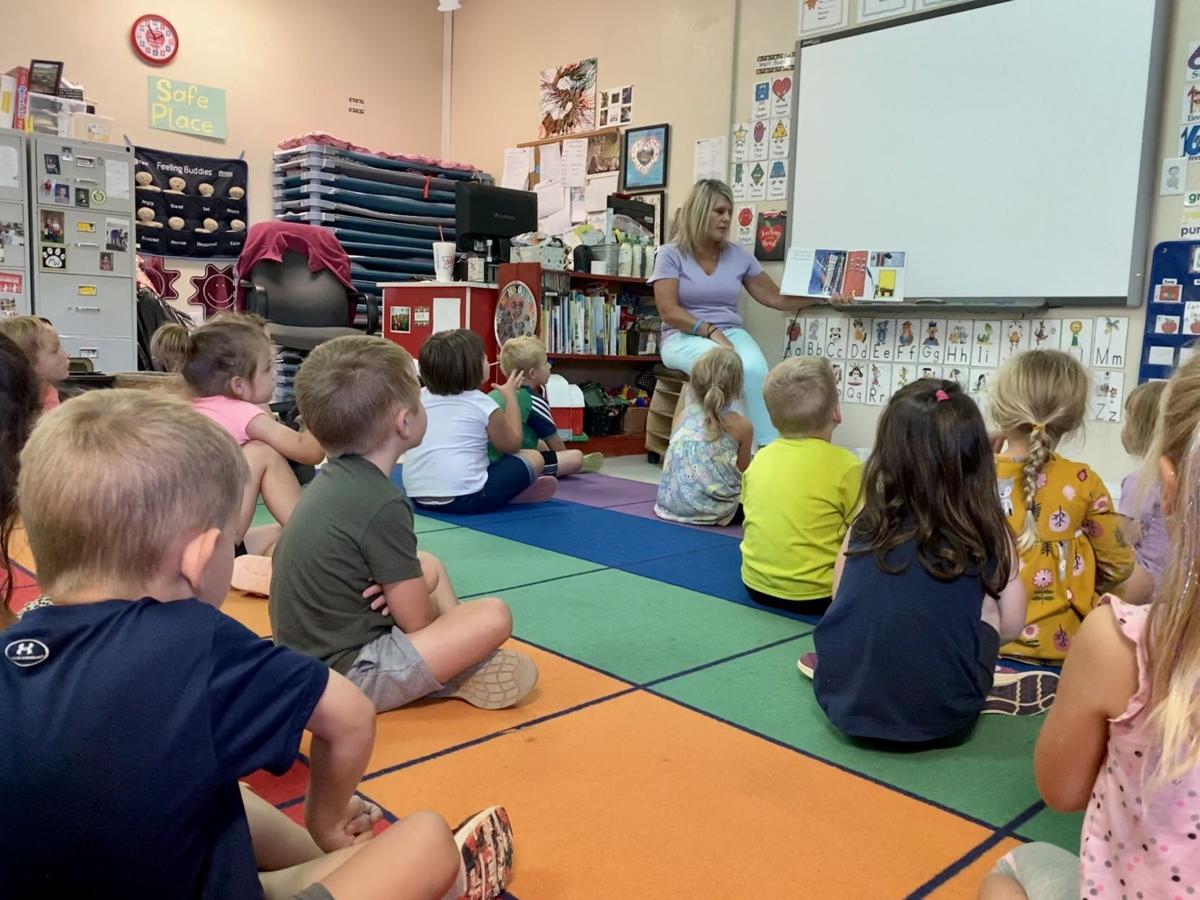 Paula Sawyer reads "September 12th. We Knew Everything Would Be Alright" to her Fredericktown Preschool students. It was written and illustrated by first-grade students of H. Byrson Masterson Elementary School located in Kennett, Missouri. 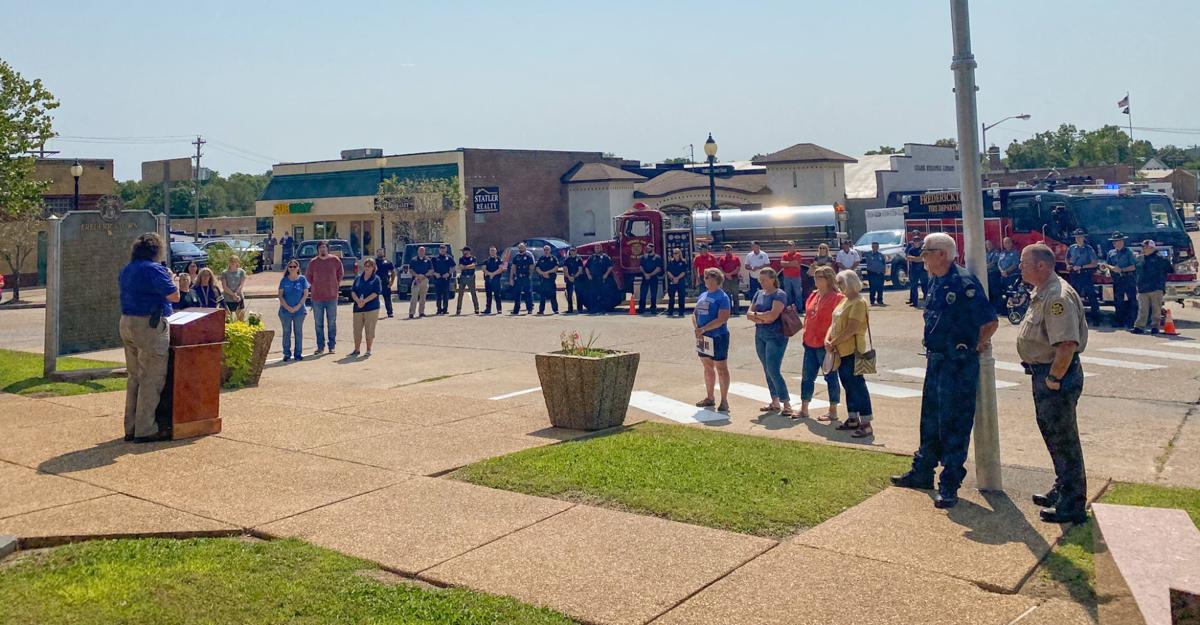 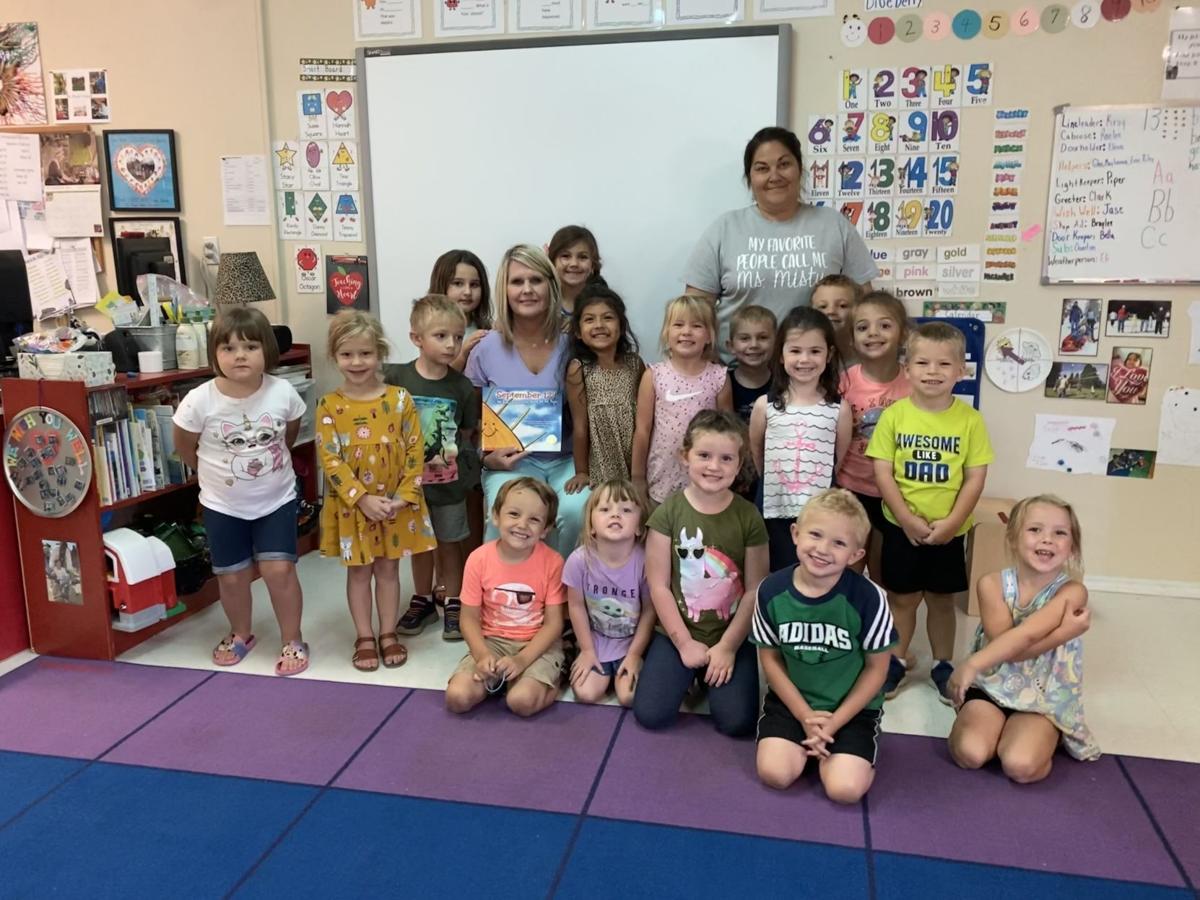 Fredericktown Preschool Teacher Paula Sawyer and Student Aide Misty Umfleet pose with the class after learning about how children felt the day after Sept. 11, 2001.

The annual Patriots Day Remembrance Ceremony was held at the Madison County Courthouse, Friday. First responders along with members of the community gathered to remember what happened, Sept. 11, 2001.

After the Pledge of Allegiance and the singing of the National Anthem, Calvary Church Student Pastor Justin Sawyer approached the podium to remind everyone why we all gather every year.

"On Sept. 11, 2001, 19 militants associated with the Islamic extremist group Al-Qaeda, hijacked four airplanes and carried out suicide attacks against targets in the United States," Pastor Sawyer said. "Two of the planes were flown into the Twin Towers of the World Trade Center in New York City, a third plane hit the Pentagon just outside Washington, D.C., and a fourth plane crashed in Shanksville, Pennsylvania. Almost 3,000 people were killed during the 9/11 terrorist attacks, which triggered major initiatives to combat terrorism."

On Dec. 18, 2001, congress named September 11 as Patriot Day and in 2009 it was declared a National Day of Service and Remembrance.

"We should always remember those that died in those buildings, those that died working, and those aboard the airplanes that day," Pastor Sawyer said. "We should never forget the ultimate sacrifice those first responders made trying to save those trapped in those buildings and we should never forget those in the military services that have died in the war on terrorism since that day."

Pastor Sawyer then led the crowd in a moment of silence, followed by a prayer.

While those around the square remembered the events of that day, across town students sat in classrooms learning about it in history lessons. Not one them was even born when the events on Sept. 11th occurred.

We asked teachers from different grade levels, pre-k, middle school, and high school, to take us into their classrooms and show how they teach their students, and how it makes them feel.

Fredericktown Preschool Teacher Paula Sawyer said she remembers the day. She was walking down the hallway at Fredericktown Elementary school.

"We were coming back from gym," Sawyer said. "We noticed evidence of something happening out of the norm. Our fellow teachers had their TV's on which was very unusual."

Sawyer said, when teaching her students she keeps it simple and honest.

"I read a book titled 'September 12th. We Knew Everything Would Be Alright,'" Sawyer said. "Written and illustrated by first-grade students of H. Byrson Masterson Elementary School located in Kennett, Missouri. I talk to my students about being safe and that I will do my best to always keep them safe."

As Sawyer read the book to the class, the students sat and listened while she taught them along the way. She said bad things did happen that day, but the next day students knew they were safe because their parents and teachers loved them.

"I also teach that in some places around the world, they don't have freedoms like we do," Sawyer said. "Examples would be like what we wear, how we dress, what we eat, and how we can live where we want. Sometimes other people like to hurt us or are mad because we have those freedoms."

At Fredericktown Elementary School, teacher Ryan Thompson shows a little footage from 9/11 as well as a cartoon version that explains what happens.

Thompson said, he then has a serious conversation about the event and they talk about what it means to take a moment of silence and why we do it.

"Teaching about a major tragedy that happened can always be difficult to talk about but especially when it is one that you remember," Thompson said.

Thompson remembered the day he said he was in Mr. Smith's 7th grade math class which was one of his first classes of the day.

"I remember that for the rest of the day and the rest of the week, we did nothing but watch the news in the classrooms and have discussions about what was going on," Thompson said.  "When teaching about a tragedy, there really is no perfect lesson plan to follow because you never know how a specific class will respond to the tragedy or what type of questions they will have."

Fredericktown Intermediate School teacher Erin Embry said teaching about 9/11 is an emotional experience for her but also something that she enjoys.

"It was such a powerful thing to live through, and I do think it is very important to teach my kids about it," Embry said. "Third graders love learning about history, especially American history. September 11 is something that they are always interested in and they are very respectful during those lessons. They realize how tragic and devastating it was, and they really want to honor all the people that lost their lives that day."

Embry said she tries to teach in a way that is informative but not scary to the students.

"We watch an age appropriate video and read a few of my favorite books about the attacks," Embry said. "Every year we read 'Fireboat,' 'Seven and a Half Tons of Steel,' and 'September 12th.' We then discuss the events as a class and I try to answer all of their questions."

Embry said she remembers driving to Mineral Area College for class as the first tower was hit.

"The radio announcer broke in with the news of the first tower being hit, and I thought it was just a terrible accident," Embry said. "I was in the MAC commons when the second tower was hit and was watching with a huge group of people. At that point, everyone realized it was not an accident, but a horrible attack. People were screaming and crying. Shortly after, my professor came into the class and told us about the attack on the Pentagon and canceled class for the day."

Over at Kelly A. Burlison Middle School, 7th grade social studies teacher Alana Stephens always tells her students about her experience. Then they watch footage from the day, discuss the memorial, the heroes on Flight 93, and the rescue efforts made in the days following.

"I was a junior at SEMO on 9/11 and had a morning class," Stephens said. "I knew something was wrong when my instructor came to class late and his expression was one of shock and disbelief. He didn't say anything to us except, 'I can't believe this is happening, go home and watch the news.'"

Stephens said she remembers running across campus to a friend's apartment having a feeling of dread and fearful anticipation.

"When my friend opened their apartment door, I could see the TV behind him and smoke billowing from the towers," Stephens said. "I hit my knees on the floor in front of the TV, feeling horrified as the first tower began to collapse. We were terrified that we were going to be attacked in other places as the news of all the federal buildings around the nation were being closed and all flights were grounded."

Stephens said, she teachers her students how united the nation felt after that day and how seeing the American flags being flown and worn everywhere made her feel hopeful and proud to be American.

"I do find it difficult to teach about 9/11 because it is emotional, and today it is just a historical event to my students," Stephens said. "When I first began my teaching career, I could have conversations with my students about 9/11 because they could relate first hand. Now I have to recount everything for them and they do not always understand the emotion I feel when I talk about it."

Fredericktown High School world history and government teacher Tracie Parker has her students write a paragraph about what they already know about 9/11. Then they discuss the different events that happened that day. She said she also gives them biographies of the passengers of Flight 93.

"I then show a video about Flight 93 or the World Trade Center, so they can see some of those events. After the videos we discuss what happened, how it affected the United States, and also how it makes them feel knowing this happened in our country just a short time ago."

Parker said the difficult part for her is showing the videos.

"Even though I show them every year, it doesn't get any easier to watch," Parker said.

This week in Washington, Joe Biden rolled out the single-most outrageous, unconstitutional expansion of the federal government’s power in my l…

The Madison County Health Department has decided to start clearing up some misleading information about COVID-19.

Fredericktown Police Department to crack down on child restraint violations

Editor’s note: This is part three of a multi-part series surrounding climate policy.

City recognizes workers who go above and beyond

More than a fundraiser

Paula Sawyer reads "September 12th. We Knew Everything Would Be Alright" to her Fredericktown Preschool students. It was written and illustrated by first-grade students of H. Byrson Masterson Elementary School located in Kennett, Missouri.

Fredericktown Preschool Teacher Paula Sawyer and Student Aide Misty Umfleet pose with the class after learning about how children felt the day after Sept. 11, 2001.