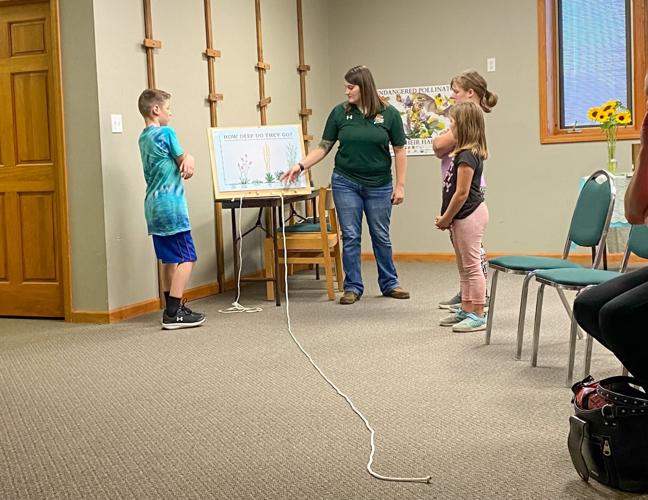 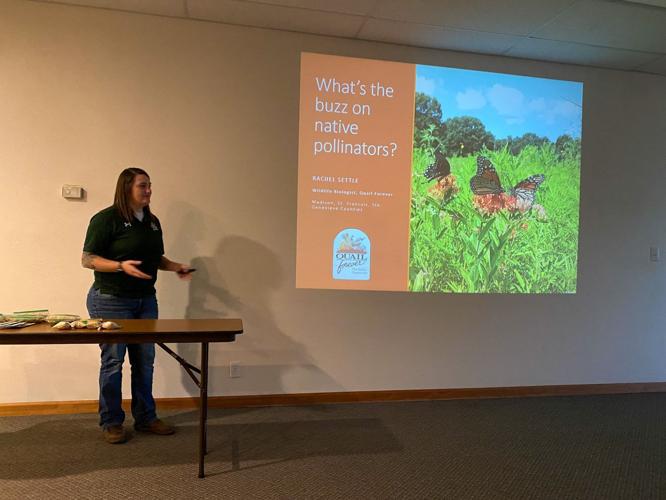 Quail Forever Wildlife Biologist Rachel Settle explains the importance of pollinators and native plants during her visit to the Fredericktown branch of the Ozark Regional Library, Sept. 30.

Settle came to Fredericktown earlier this month to express the importance of pollinators and native plants.

"You may be surprised at some of the animals listed," Settle said. "Basically it is any type of animal or insect that transfers pollen, or that pollinates, between plants. That can be anything from our native bees, butterflies, ants, flies, all the way to bats, birds and even reptiles."

Settle said, even small snakes have been shown to pollinate some types of flowers. One interesting fact Settle shared was that most people automatically associate pollinators as honeybees while the honeybee is actually not even native to the United States.

Why are pollinators important?

"The majority of flowering plants anywhere in the world are dependent upon pollinators," Settle said. "Pollinators can contribute $29 billion to the farm income in the United States. By placing pollinator friendly habitats next to crop fields that require insect pollination to produce, studies have shown that they can actually have a higher crop yield. So (it is) better for farmers and good for pollinators."

Settle said pollinators are also a good food source for birds and other wildlife.

"Whenever we are talking about native plant conservation in general, we are not just talking about helping native pollinators but it brings in this whole issue with the world bird declines," Settle said. "In 2019 there was a study published that showed in the United States and Canada the number of birds has fallen by 29% since 1970. That is a pretty significant drop."

Settle said the decline in birds has contributed to the lack of pollinators and essentially the lack of native plants.

"It would make sense right, if insects are what birds eat and if the insects were to decline you would also expect the birds to decline also," Settle said.

"In order to protect the pollinators we need to plant native plants," Settle said. "In a nutshell, these pollinators have been around for so long that they have lived with specific plants, so they developed certain types of features on them that enables them to pollinate plants."

Settle said some pollinators rely on specific native plants in order to survive.

How can we help?

Settle said, basically what you would need to do is provide pollinators with a wide variety of native flowers that will help them over the entire course of the early spring into the fall.

"This is a lot of information, and I know a lot of people don't know where to start," Settle said. "I will tell you that one of the best resources is what is called Grow Native. Essentially what they do is simplify it for you. They have all these different conditions that you can look at, and they plan it out for you."

Settle also recommended having patience when it comes to growing native plants as their long root system can take some time to grow.

Scams to watch out for in the new year

The New Year brings in new beginnings and new opportunity. Everyone starts with a fresh slate. The New Year is a time to set goals and resolut…

Quail Forever Wildlife Biologist Rachel Settle explains the importance of pollinators and native plants during her visit to the Fredericktown branch of the Ozark Regional Library, Sept. 30.