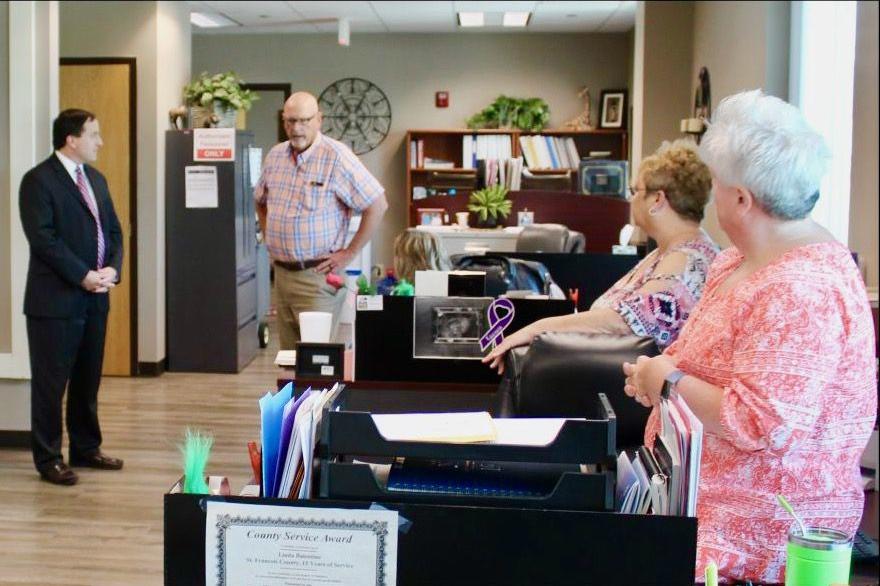 Missouri Secretary of State Jay Ashcroft visits with County Clerk Kevin Engler and his staff at the courthouse annex last week. Afterwards, the pair traveled over to see the new election central offices at the county's Weber Road Facility. 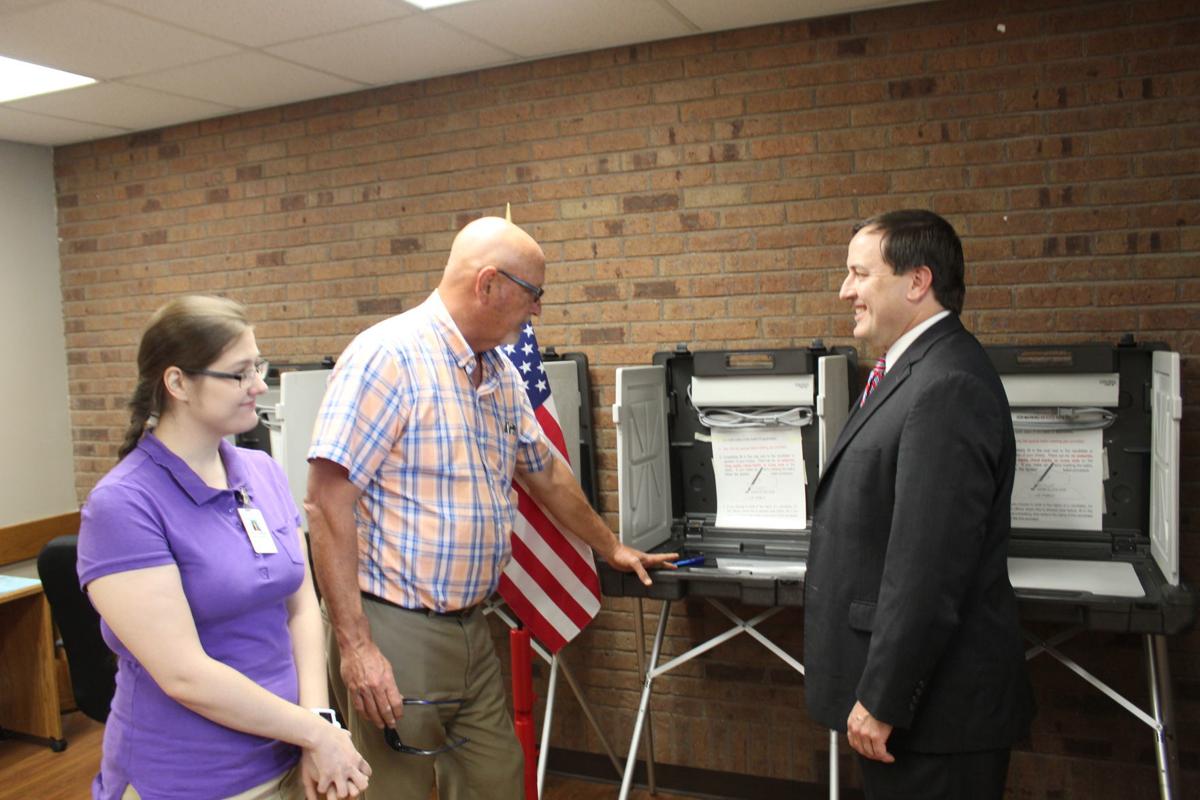 The secretary of state is the top official in charge of voting and elections in Missouri and the county clerk’s office is in charge of voting and elections in St. Francois County. Ashcroft first met with County Clerk Kevin Engler and his staff at the courthouse annex and then traveled over to the Weber Road Facility where he was given a tour of the new election central offices.

Ashcroft appeared impressed with the new facility and complimented Engler on how quickly the office was made ready to serve the public.

“I think it’s good,” Ashcroft said. “I think it really shows the innovation that we are seeing with local election authorities — how they are looking at election security differently — but it’s not just about election security. This is also going to set up the workers to be able to do a better job, to have things better laid out.

"This is all about not just security, but the entire focus is making sure that the election experience for voters in this county is the best it can be. That when they come in, everything’s ready for them. They can have confidence in them. [The workers] can deal with the tabulation of the votes quickly and securely and get that information out.”

According to Ashcroft, election facilities require extensive space aside from the voting equipment and counting votes on Election Day.

“You may not realize that with local election authorities, a lot of the material from an election has to be stored for 22 months,” he said. “[Things] like the poll books where you sign in, ballots and other things. So, they have to have a lot of storage space, but it also has to be secure in case there are any concerns.”

Ashcroft stressed that the timing of moving the facility and setting it up was optimal for more than one reason. When discussing low turnout elections with Elections Clerk Jackie Jones, he said that the upcoming Presidential Preference Primary on March 10, 2020, would be a good trial run for seeing how equipment and procedures are laid out.

“So, it can actually be a great way, since you’ve moved and you probably have some new procedures, to test those. Since it’s a much lower turnout — a much lower participation rate — you can make sure that it works the way you thought it would. You can do that with an 8-9% (turnout) and learn from that. But if you’re doing that in a general election in a presidential year, that’s a long night and the clock seems to zip along without ever stopping.”

Ashcroft further addressed his concern with low turnout elections, saying, “We can encourage people to participate, but as much as it is your right to vote, it’s your right not to vote.”

In a message sent out late last week by the Farmington R-7 School District, it was announced to parents and guardians of students that a mask …

This story originally appeared in the Sept. 4, 1931 issue of The Farmington Press. – Editor

Think you're having a bad hair day? This rare creature is having a bad EVERYTHING day! Do you know what it is called? If you think you know th…

The city of Farmington’s Development Services Director Tim Porter did some number crunching after the U.S. Census Bureau’s numbers came out re…

After taking a year off due to the Covid-19 pandemic, Discover Farmington's Blues, Brews, & BBQ returns Sept. 17-18  to downtown Farmingto…

Variety of services offered to veterans who feel alone

Veterans from all eras are reacting to the events in Afghanistan with the U.S. withdrawal and the takeover by the Taliban.

This week's Take a Guess is a tool used several centuries ago, but no longer used today — and that's a good thing. Do you know what it is call…

Glore Perez Gaekel was presented the Americanism Award at the Sept. 4 meeting of the Sarah Barton Murphy Chapter of the National Society Daugh…

Missouri Secretary of State Jay Ashcroft visits with County Clerk Kevin Engler and his staff at the courthouse annex last week. Afterwards, the pair traveled over to see the new election central offices at the county's Weber Road Facility.