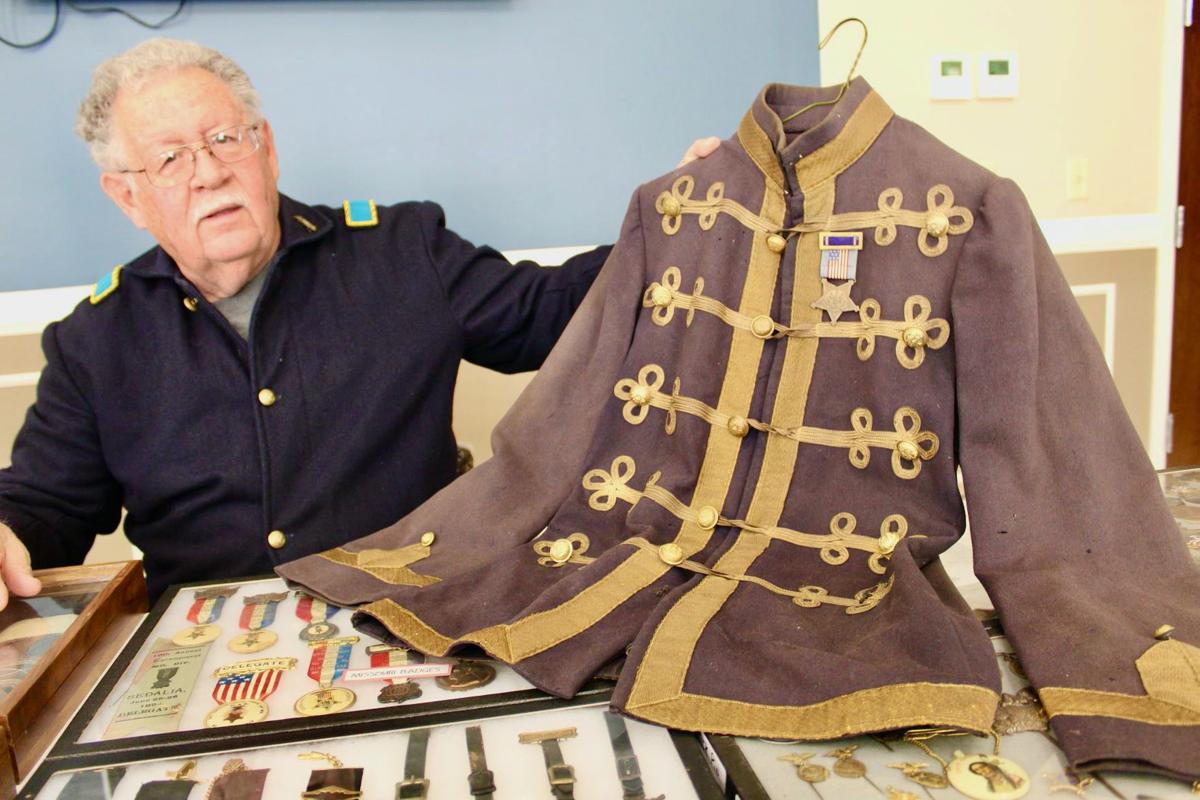 Douglas Roussin, who specializes in collecting items related to the Grand Army of the Republic, holds up a GAR band uniform during Tuesday's Salute to Veterans held at the Farmington Public Library. 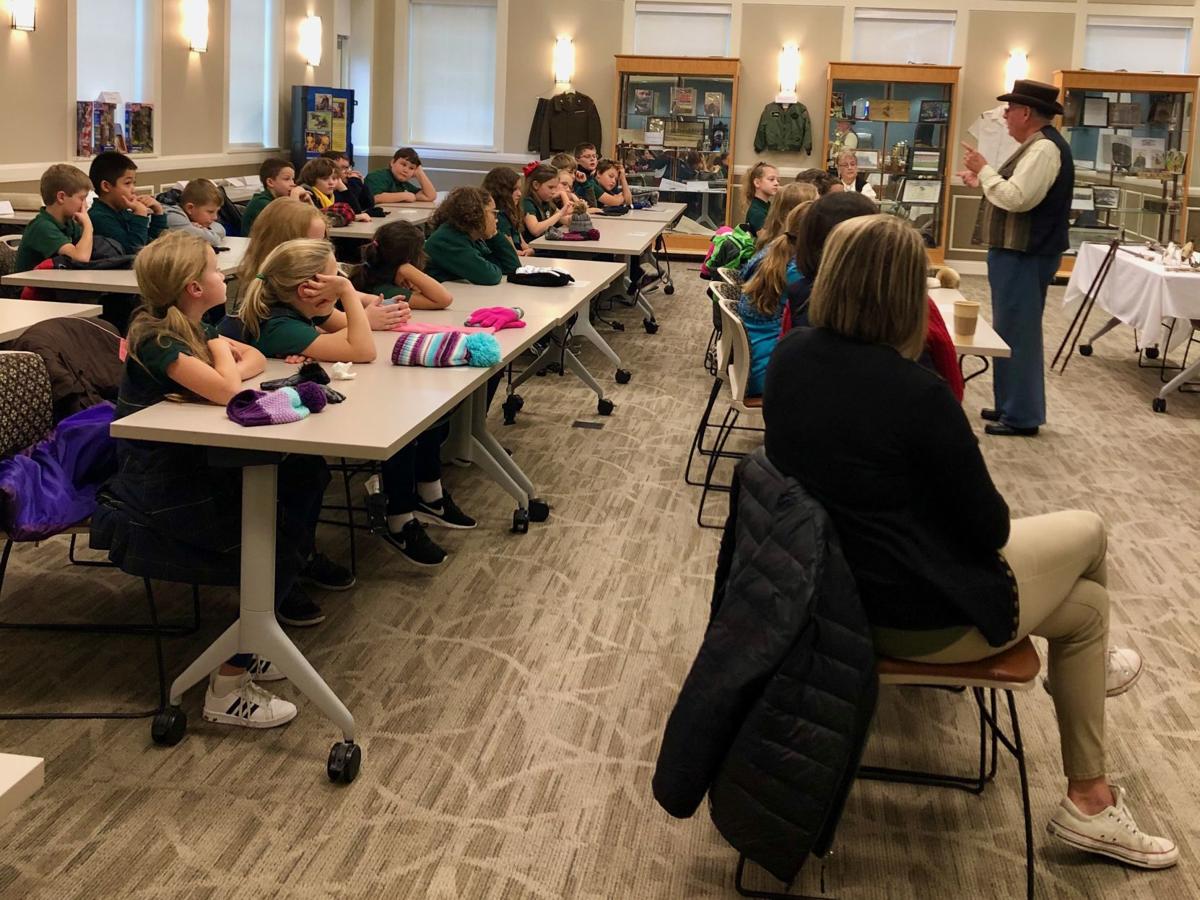 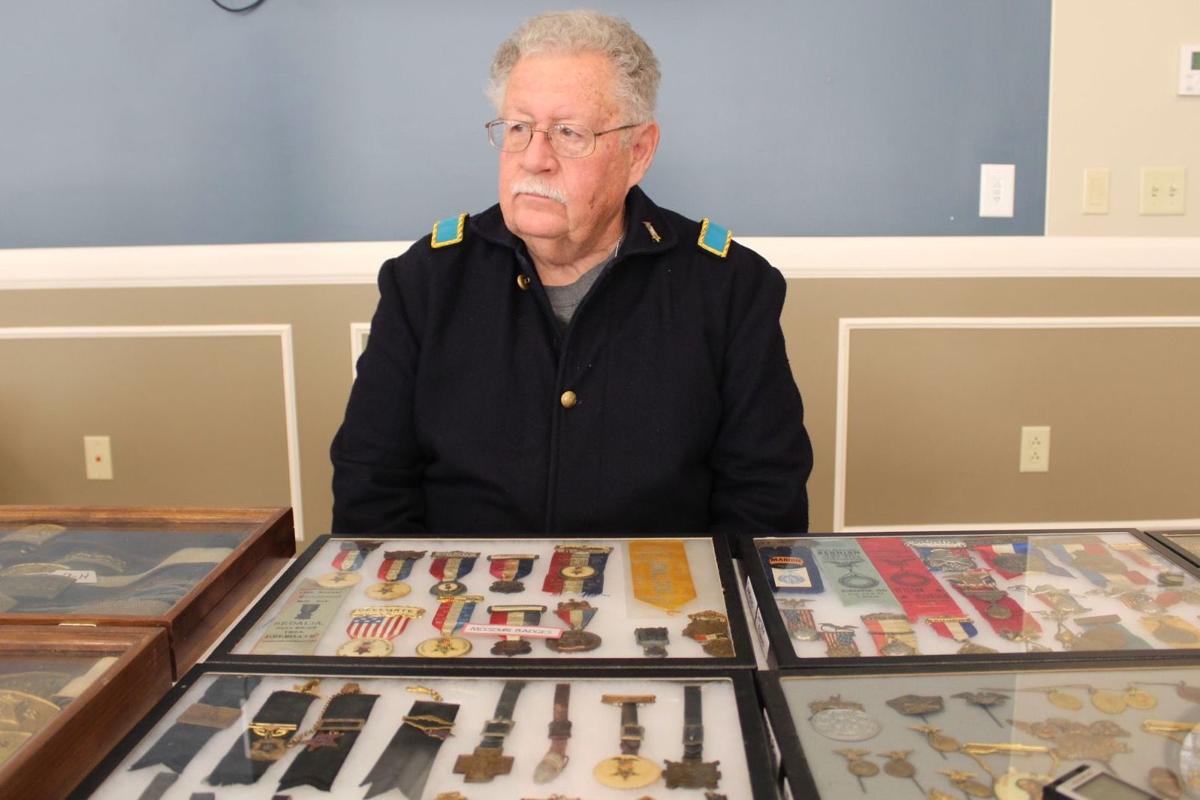 Historian Douglas Roussin displays a small sample of his collection of badges, belts and belt buckles, as well as other paraphernalia he has collected throughout his life. 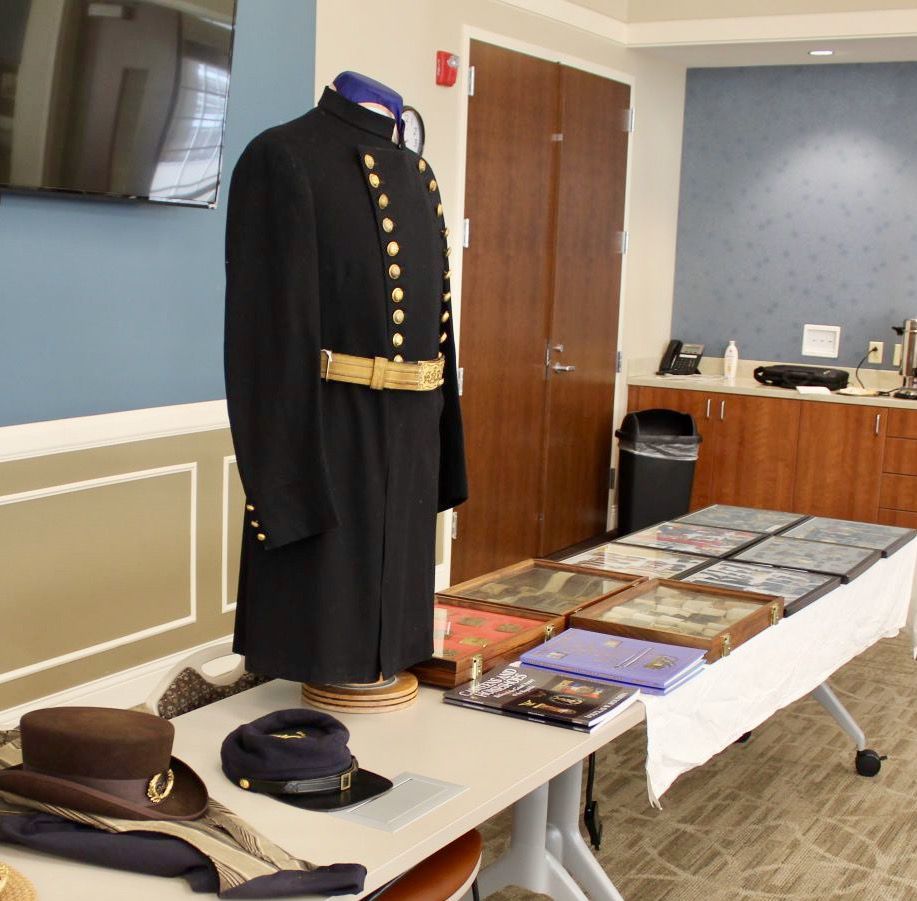 Along with a selection of his vast collection of badges, belts and belt buckles, historian Douglas Roussin displays examples of Civil War-era clothing — including a Union Army uniform.

Douglas Roussin, who specializes in collecting items related to the Grand Army of the Republic, holds up a GAR band uniform during Tuesday's Salute to Veterans held at the Farmington Public Library.

Historian Douglas Roussin displays a small sample of his collection of badges, belts and belt buckles, as well as other paraphernalia he has collected throughout his life.

Along with a selection of his vast collection of badges, belts and belt buckles, historian Douglas Roussin displays examples of Civil War-era clothing — including a Union Army uniform.

The Farmington History Museum held its fourth annual Salute to Veterans Monday and Tuesday at the Farmington Public Library.

One of the featured speakers for the two-day event was historian Douglas Roussin who specializes in collecting items related to the Grand Army of the Republic (GAR), an organization consisting of Union Civil War veterans that ended in 1956 with the death of Albert Woolson, the last known survivor of the Union Army.

Roussin displayed a small sample of his collection of badges, belts and belt buckles, as well as other paraphernalia he has collected throughout his life.

“I became interested in the Civil War when I was 10 years old and that was right before the Centennial [1957],” he said. “I started going to a few reenactments. Those were the days of cowboys and Indians and Davy Crockett and that sort of stuff, so we used to as kids play Civil War and stuff like that.

"When I was 13 I bought my first Civil War rifle. I paid $30 for it. I became interested in looking for other relics, belt buckles, something like that. In about 1968 they ran an article about a Civil War Battle just south of Desoto. I started going to Civil War battlefields metal detecting, and over the years I accumulated literally thousands of bullets, hundreds of buttons, some belt buckles, a lot of artillery, cannonballs.”

As Roussin collected more of GAR items, he began noticing the variety of designs involved in making the various items.

“Over the course of time I would pick up a GAR belt buckle and I really didn’t have any interest in that," he said. "I used it for trade for a Civil War belt buckle. “Every time I got one that was a little bit different, I would set it aside. I started collecting buckles — anything in the 1800’s to 1900. One day I looked at them and there were so many variations of these buckles. I ended up writing a book on the belt buckles and the swords of the GAR. I identified close to 60 GAR belt buckles, another 30 Sons of Union Veterans of the Civil War buckles, and various types of swords and manufacturers.”

Roussin felt like writing the book was something that needed to be done as nobody else had written anything on collectibles like these. Since the book was published in 2008, he has found another 10 or 12 GAR buckles, especially with collectors around the country supplying him new items.

Although his collection is extensive and probably the most complete around, his "Holy Grail" of GAR buckles has continued to elude him.

“The very first one, I have been looking for that for 40 years,” he said. “I know they were made. I’ve never seen one. I’ve talked to really big dealers across the country. They’ve never seen one either. Apparently that style was not very popular. I call it the police badge style. Why they are not showing up anywhere is beyond me.”

Roussin then turned his attention to his extensive collection of badges, stickpins and ribbons from different GAR events over the years. The first items were stickpins and then he graduated to the large ribbon/badge combination.

Today, few people who are even aware of the GAR realize how immense the group was at its prime. Roussin observed that in 1890, the GAR had a membership of almost 500,000.

“Their heyday as an organization was 1880 to 1915,” he said. “They had local posts — in Missouri probably 600 posts across the state. They had encampments every year. There was a Department of Missouri which was over the local 600 posts. Once a year the department had a meeting which lasted several days that brought in 100-200 guys into a community. They had a post in England, South America, Canada — there was a couple of posts in Australia.

“Once a year they would have the national encampment. This was of all the departments across the country. This would last a week. They would have banquets, parades, tours of battlefields — and this was a really big deal for the hosting city. In 1900, there were probably 1,500 delegates plus their families. The hosting city made a ton of money, plus you had the vendors who were making stickpins, souvenir badges, selling watch fobs and things like that.”

Roussin reflects that today’s politically charged climate towards the Civil War has become a sort of regression compared to the actual outlook adopted by veterans in their later years. Some national encampments were later held in the South.

“The farthest south was Chattanooga,” he said. “It was in 1913. It was a joint reunion with the Confederates. I find ironic today about all these people tearing down these statues. At the turn of the century these old grudges had been forgotten. The southern soldiers were being allowed to build all these monuments because the GAR really didn’t object to it anymore. It was a way of tying the people together.”

As a member of the Sons of Union Veterans of the Civil War — the replacement of the GAR— Roussin observed that his group is not involved in the removal of Confederate monuments.

“A lot of people think that the Sons of Union Veterans are in favor of taking down Confederate monuments," he said. "That’s baloney! We are the ones trying to preserve monuments.”

“I became interested in the Civil War when I was 10 years old and that was right before the Centennial." — Historian Douglas Roussin

Get important breaking news and local news alerts in your inbox