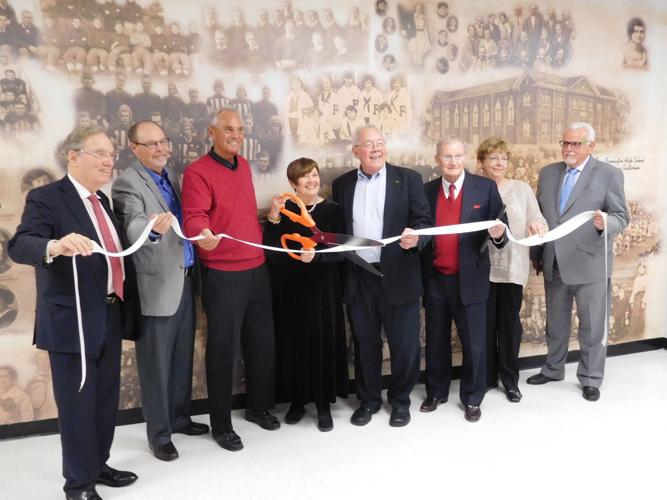 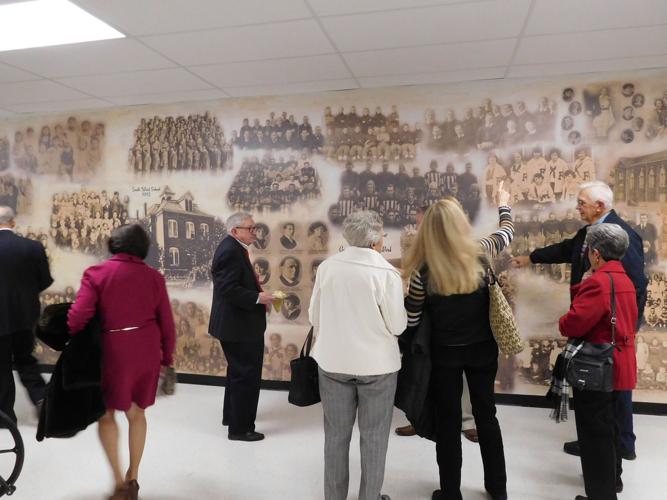 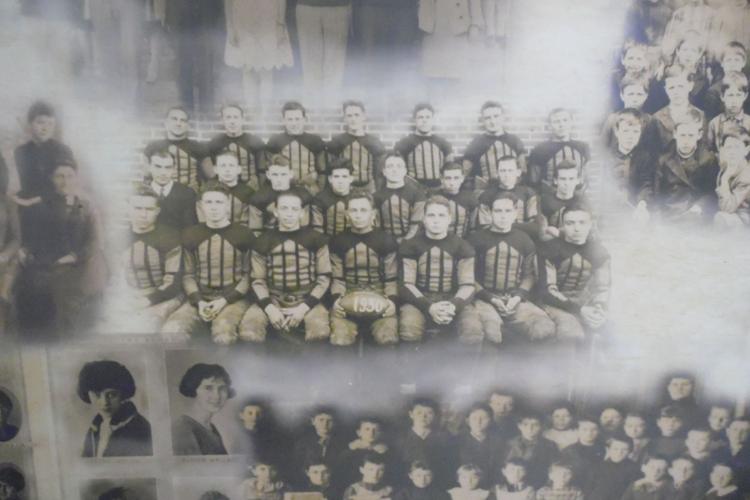 Made by students at Black Knight TV, the wallpaper used in the Hall of Fame incorporates pictures from the past to highlight the community's history. 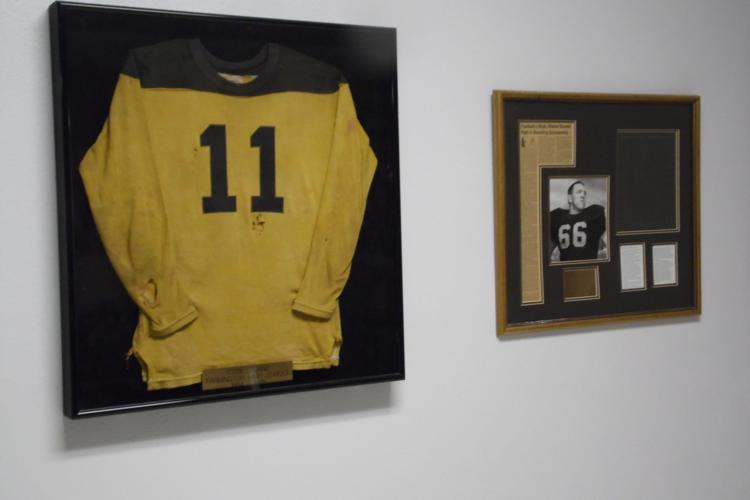 Hanging on the wall of the Farmington Hall of Fame is the football jersey of Ed Blaine. 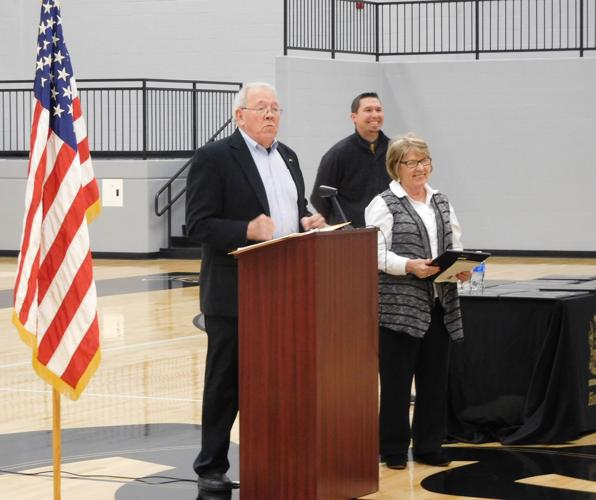 From Farmington Knight to the Green Bay Packers to a successful career, Dr. Edward Blaine expresses his appreciation for his induction into the Farmington Hall of Fame. 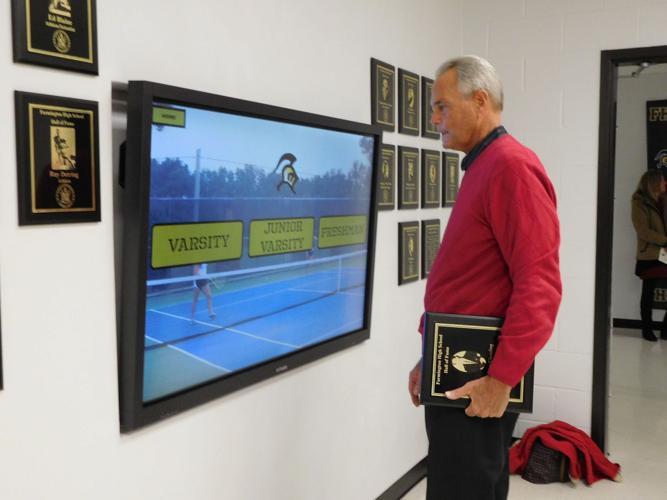 A member of the first Farmington Hall of Fame class, William Giessing spends a few moments to look at the interactive television in the Hall of Fame where visitors can learn about the inductees and their achievements. 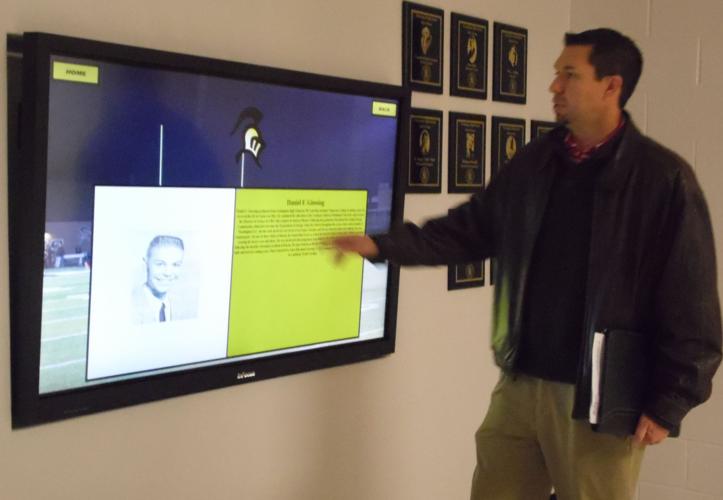 Superintendent Matt Ruble looks at the biographies of this year's recipients on the Hall of Fame's interactive television screen. 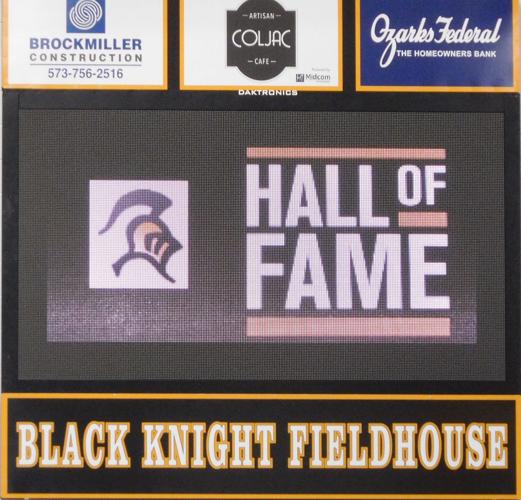 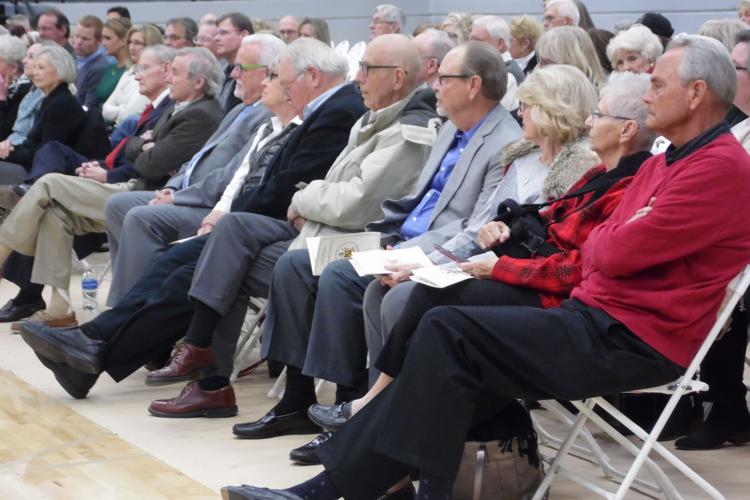 For many, life seems to begin in high school. One begins to develop strengths and discover talents. Whether in sports or academics, the world begins to open up during those four years.

On Dec. 11, Farmington School District celebrated the achievements of 19 alumnus who began their life journey as Knights and went on to leave an indelible mark on society by inducting them into the first class of the Farmington Hall of Fame.

Held in the Black Knight Fieldhouse, the district honored the recipients by hosting an induction ceremony and ribbon cutting ceremony to officially open the Hall of Fame.

“There are so many fine people here today,” said Angela Hahn, a member of the Hall of Fame selection board and the district’s board of education. “The Hall of Fame is such a testimony to Farmington R-7.”

Sunday’s event recognized a diverse group of Farmington grads who challenged the world and made an impression as athletes, authors, aviators, educators, entrepreneurs and innovators.

“This is coming home,” said Dr. Edward Blaine, the first member of the premiere class. “I have been put in other hall of fames over the years, but this is home for me. Coming home and being acknowledged for your athletic past is truly wonderful.”

Blaine was a graduate of the class of 1958 where he excelled in both athletics and academics. After distinguishing himself as a scholar and an athlete at the University of Missouri, Blaine played professional football for the Green Bay Packers and the Philadelphia Eagles.

After his playing days, Blaine received his PhD in physiology from University of Missouri and completed his post-doctoral work at Howard Florey Institute for Experimental Physiology and Medicine at the University of Melbourne.

Joining Blaine on this monumental evening was Fred Bergsten, class of 1957, whose accomplishments include coordinating United States foreign policy from 1969 to 1971 at the White House under the tutelage of Dr. Henry Kissinger.

Among a litany of accomplishments, Bergsten would go on to represent his country on the G-5 Deputies and the G-7 summits. In addition, the Farmington grad would become the founding director of the Peterson Institute for International Economics. Since 2010, Bergsten has worked on the Advisory Committee for Trade Policy and Negotiations for President Obama.

“I have dealt with heads of state from around the world and worked for four different presidents,” Bergsten said. “I always remember my roots here in Farmington. It was great for me growing up and having the experiences from this part of the world.”

Of the 19 inductees honored at Sunday’s ceremony, seven of the recipients were present to receive their plaques and to speak about their time at FHS. One of the recipients, W. Patrick Gordon told the audience how he couldn’t wait to leave Farmington. In fact, three days after graduation, he said he was off to serve in the Army.

“I was anxious to get away from Farmington when I graduated from high school,” Gordon said. “Three days after graduation I was in the Army, and I was gone. I didn’t come back for a long, long time.”

Years later, Gordon returned to his hometown with his wife, Emily, and according to him, saw Farmington in a brand new light – through the eyes of his wife. She viewed the town in a much different way. She saw the charm and the beauty in its historic homes and the kindness of its residents. Gordon said he had to admit she was 100 percent correct.

Gordon's long trek home can be recorded in miles as well. The Farmington grad traveled more than 7,000 miles from his home in Abu Dhabi, United Arab Emirates for the ceremony.

For the last 37 years, he has lived and worked in the Middle East as an aviator, safety officer, an advisor to Sheikh Hamdan Bin Murbarak Al Nahyan, a member of the ruling family of the United Emirates, CEO of Royal Jet Airlines, and Chairman of the Board of Royal Jet and Minister of Higher Education.

“There was a long period of time where I hadn’t been back for many years. Now, I come back a couple of years.” Gordon said. “So, to participate in something like this is quite an honor. My real reason for coming was to make sure this wasn’t the world’s worst practical joke. I couldn’t believe there was any way I was nominated let alone make it past the selection committee.”

For one Farmington family, Sunday’s induction ceremony was truly a family event as two brothers were inducted into the hall of fame.

Those two were Dan Giessing, class of 1957, for his work in science, specifically nuclear safety, and William Giessing, class of 1959, as an athlete. During their acceptance speeches, both talked about the values instilled while growing up in Farmington and how those lessons served them well.

“This is a very big honor for us,” said Dan. “We are very pleased to be here and be a part of this, especially with my brother William. I think our parents would be very proud.”

For Dr. Charles Cozean, class of 1954, life after high school led him to the University of Kansas School of Medicine with a specialty in ophthalmology. He would become a pioneer in surgical procedures and instrumentation, but is still very proud of his time at Farmington High School.

“It is true, I never did have a bad day at Farmington High School,” Cozean said. “I loved every day. “

Once the induction ceremony was complete, the recipients, their family, friends, guests and notable members of the district were ushered into the Hall of Fame, which connects the school to the new fieldhouse.

Filling the walls were memorabilia such as Blaine’s high school football jersey, lettermen sweaters worn by Sonny and Elma Jennings and other items of interest.

But for most people, the most spellbinding item was the wallpaper depicting the history of school district over the years. The wall shows buildings no longer standing or those that have changed greatly since being built. It pictures the students and educators who were part of the district's past who left an indelible mark on its future.

“The wallpaper really captures our history,” Hahn said. “It is the history of Farmington R-7. We are so pleased that we have been able to secure this for everyone.”

In addition to the wallpaper, guest can use an interactive television to read about the remarkable achievements made by the district’s hall of famers, and how their ties to the school they loved remained with them through their lives.

“It was truly amazing to see what has been accomplished by our first inducted class,” said Farmington Superintendent Matt Ruble. “As educators, we know that we have great students who do amazing thing, but to read the accomplishments of this group is inspiring. From the five athletes who excelled from high school to professional sport to an author, scientists, international economist, coaches, teachers and administrator, ophthalmologist, orthopedic surgeon, inventors, entrepreneurs, and journalist.

"I am excited that we have captured some important pieces of our history and have it on display in a location that our students, faculty and community will have access to it during each event. It was a truly an amazing event, and I appreciate all of those who came out to help us make history.”

For more information on each of the Hall of Fame inductees, visit the HOF’s web site at https://storify.com/KnightsR7/farmington-r-7-hall-of-fame-ceremony.

Made by students at Black Knight TV, the wallpaper used in the Hall of Fame incorporates pictures from the past to highlight the community's history.

Hanging on the wall of the Farmington Hall of Fame is the football jersey of Ed Blaine.

From Farmington Knight to the Green Bay Packers to a successful career, Dr. Edward Blaine expresses his appreciation for his induction into the Farmington Hall of Fame.

A member of the first Farmington Hall of Fame class, William Giessing spends a few moments to look at the interactive television in the Hall of Fame where visitors can learn about the inductees and their achievements.

Superintendent Matt Ruble looks at the biographies of this year's recipients on the Hall of Fame's interactive television screen.