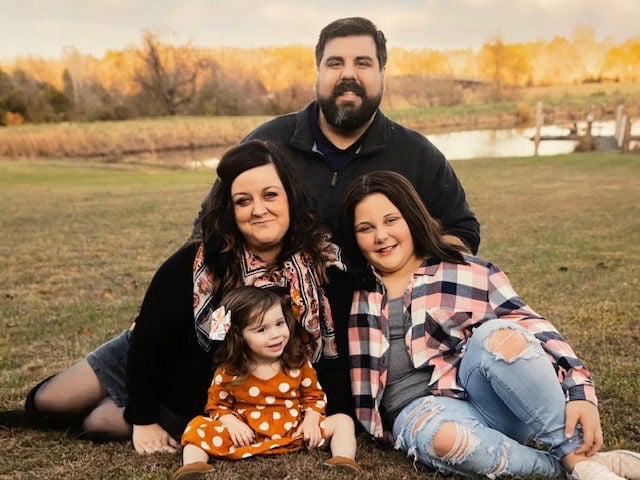 Ashley Smith is pictured with her husband, Cory, and daughters, Addy, 10, and nearly 3-year-old daughter, Arianna, who has autism. Her vision is to open a non-profit autism center in Farmington by fall to help Arianna and children like her. 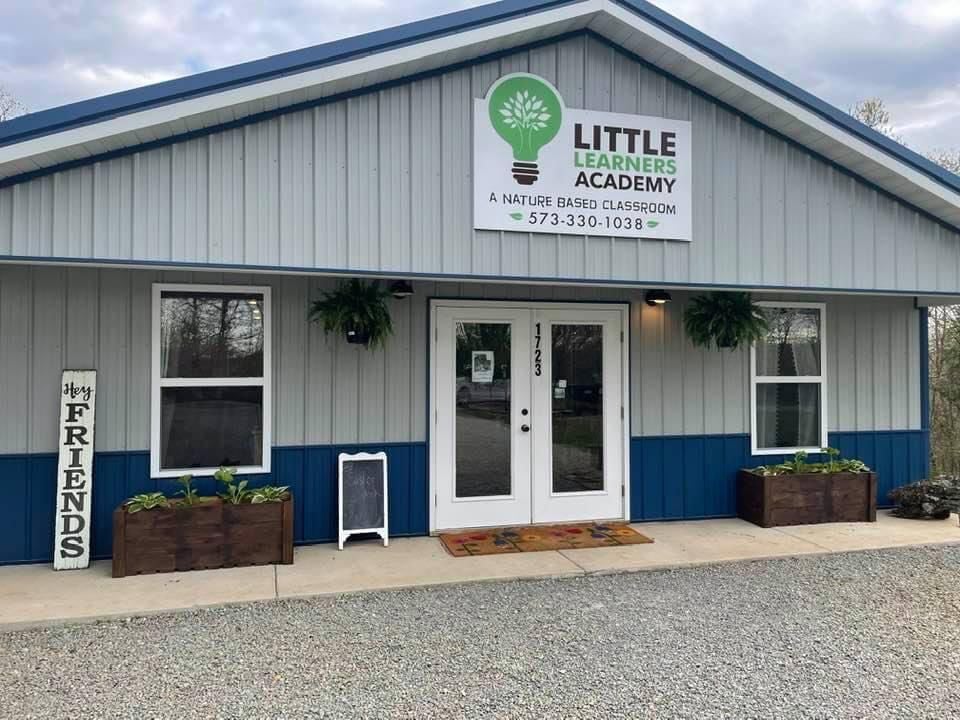 Ashley Smith's Little Learners Academy in Fredericktown is well-respected in the area and was even voted "Best Preschool in the Parkland" by Daily Journal readers. 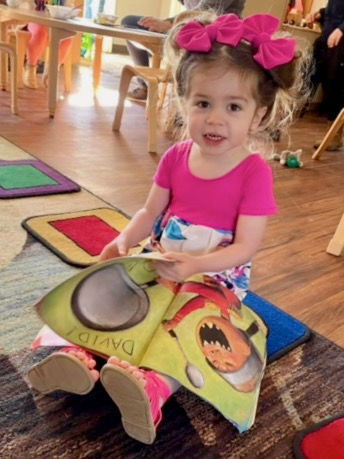 While Ashley Smith felt her daughter was showing symptoms of autism, she didn't receive an official diagnosis of her nearly-3-year-old daughter until fairly recently.

The owner of a highly acclaimed Fredericktown children’s learning center has a vision to provide a place to help children on the autism spectrum learn, grow and become functioning adults.

Ashley Smith, owner of The Little Learners Academy, learned a year ago that her daughter Arianna was born with autism.

Her academy started as an in-home daycare center so Smith could spend more time with her first-born daughter, Addy — but it soon became something much bigger.

“Everybody in town wanted me to keep their kids,” she said. “Our business grew into a preschool. We received a $250,000 Missouri preschool grant. Because we got accredited, our school had to have certified teachers. It was amazing to see the difference from what a daycare was to a preschool — and seeing the impact of what it meant to have educated teachers teaching early education.

“It blew me away! It’s a different world. The impact that you can have on children when you really know early education is life changing. Not only that, but you learn early intervention. You learn to see things — flags — for disabilities, for delays. We’re able to have a classroom that can get help through different programs to make it better for them.”

It was when Arianna was around a year old that Smith came to the conclusion her daughter might be autistic.

“Most people wouldn’t have known because they’re not in early education,” she said. “They don’t know the things to look for. I saw her quickly disappear. She was a happy, smiling baby and then things started changing. She started losing words that she had. She seemed to not be making eye contact with us. She wasn’t connecting. When one of our kids would try to play with her, she would immediately push them away. She didn’t want to be around other kids and started going into her own little world.”

Smith contacted Arianna’s pediatrician and then, because of COVID, she waited around a year before finally having her hunch confirmed. Her daughter was autistic. Then she and her husband Cory made an unsettling discovery — there were few resources in the community to help provide treatment for Arianna.

“We are lacking a whole lot,” Smith said. “We now find out that one in every 50 children are on the autism spectrum and there’s a very empty hole to meet the needs that these kids have. What I found out was that Arianna needed 20 to 40 hours of intense therapy a week. Not only did she need intense Applied Behavior Analysis (ABA), which would be 20-40 hours a week — recommending that she needed 40 — she also needed speech therapy because she wasn’t talking.

“She was a year-and-a-half delayed on speech. She also had to have physical therapy and occupational therapy. So, this became a full-time job for me. What I found out is that most families have to quit their job to meet the needs of the children in this community because there is nowhere for them to go.”

Smith had one option — driving to the Cape Girardeau Autistic Center where Arianna could receive therapy.

“After getting the diagnosis, they told me there was a four-month waiting list in Cape,” she said. “Then they told me that she really didn’t need to go a week without therapy, or she would become more delayed. A heavy burden came on my shoulders. I knew at that time that if it wasn’t out there, I wasn’t going to make it. With the experience that I had at my school, which was rated the best preschool in the Parkland, that I could bring a great school to Farmington, which is where I was born and raised.”

Smith opened The Little Learners Academy in Fredericktown because that is where she and her husband make their home, but she has chosen a different location for the autism center.

“My heart for a long time has been to have a school in Farmington because I’ve been asked by so many people in the community to bring it there,” she said. “With Arianna’s diagnosis and seeing the need for an autism center, that’s where we decided to jump on and go. We reached out to an attorney and they’re currently finishing up our not-for-profit.

“What that means is that we are looking to have a program that’s basically brought to the area by the community. We’re going to have to apply for grants, look for funding through fundraisers and events with the community, and ask sponsors from different businesses to help us make this school a reality. We really want to bring a school to Farmington that gives the families an opportunity to go where they don’t have to pay.”

Gaining not-for-profit status for the proposed center was important for Smith as she researched the kind of center she wanted to bring to Farmington.

“We went out and visited other schools like the kind we want to have,” she said. “A lot of them were for profit. The problem with that was that these families already have a tremendous need. It’s almost impossible — to quit your job, to travel, to make those appointments. I wanted a school that they could come in-house and have all the therapies done and go to school there without the parents having to leave their job. They would have a place not only for their education, but a place like we already have at our school — home-based and a very nurturing environment.

“We believe in providing a natural learning environment. We are a Reggio-inspired classroom here, so I would bring that into Farmington too. There’s so much that goes along with that, in how children learn and making the environment natural and calming. It’s the perfect environment for children that are on the spectrum because they are already so overstimulated. We’ve seen the effects on children that aren’t on the spectrum that helps them calm and regulate. The children we have that are on the spectrum or show ADHD, they finally find a home where they can come to school and still have success.”

“A lot of our kids that come to us with ADHD and ADD are getting kicked out of their schools or daycare because they don’t know how to deal with the children’s behavior. A lot of times, the behavior is just because of the environment. So, building an environment is building a third teacher. It’s building a place that is safe and nurturing where they can come.”

Smith believes her center could be a big help to autistic children and their parents, as well, and because time is of the essence she’s ready to go.

“We also want to reach people who have the same vision as us to help us help those families. We know that with early intervention and ABA therapy that children are becoming so much more successful in school. They have a way bigger chance to be able to go into the classroom and handle their studies without having to be moved into special ed, if we can meet the need early, early, early.”

Smith is not wearing rose-colored glasses. She knows her vision will require a lot of time and a lot of effort.

“We may have to start small, but we have a big vision,” she said. “We know at first it could be a small building from which we’ll have to grow — maybe a classroom within another building. We’re going to have to see what funding comes in. Whatever we get is where we’ll go. It may take time, or we may have enough support that we’re able to start in a big building.

“Our big vision is that one day the building will be big enough that we are able to have a sensory gym where kids in the community with sensory needs will have a place to come with their parents or where the parents can drop the kids off for a couple of hours so they can go shopping or do the other things they can’t do because caring for the child won’t allow that.”

Asked how people in the community can help her realize her vision, Smith is looking for people who are help her fund the process.

“It’s a big project and we’re going to need big support, she said. “Most centers like this are $2.5 million. The Cape Autism Center was $2.5 million. We are a little different because we’re going to start out as an ABA preschool program. If we do enough funding, we would like to expand that to children up to high school age, so they can come and have a place. A big thing for children with autism is life skills. They need a place where they can learn how to take care of themselves once they’re out of school. As the children get older, their parents will too. They’re going to need those skills to succeed in life and we want to help them.”

Smith encourages anyone interested in supporting the project to visit the www.tllapreschool.com website and click the link that will take them to a page about the autism school. She also has a Facebook group called Little Learners Spectrum Center, Inc., or you can contact her directly at ashleyd_smith@hotmail.com.

An old maxim attributed to Napoleon Bonaparte is the quote “An army marches on its stomach.”

During a July 22 press conference at the State Capitol, Governor Mike Parson announced the launch of a statewide COVID-19 vaccination incentiv…

This week's Take a Guess is a really odd and obscure item. It is a real product you can purchase and it has a specific purpose. It's possible …

It was 18 years ago when the event first began. It’s now grown from a one-third-full theater event to the mega-monster sold-out performances a…

A rise in speeding and other reckless driving behaviors continues to be a disturbing trend in 2021. During the first half of the year, more th…

The following materials were added to the Farmington Public Library during the month of July 2021.

Parkland Health Center has announced that Nat Rousan was selected as the Our BJC Values Employee for the month of June 2021.

Ashley Smith is pictured with her husband, Cory, and daughters, Addy, 10, and nearly 3-year-old daughter, Arianna, who has autism. Her vision is to open a non-profit autism center in Farmington by fall to help Arianna and children like her.

Ashley Smith's Little Learners Academy in Fredericktown is well-respected in the area and was even voted "Best Preschool in the Parkland" by Daily Journal readers.

While Ashley Smith felt her daughter was showing symptoms of autism, she didn't receive an official diagnosis of her nearly-3-year-old daughter until fairly recently.