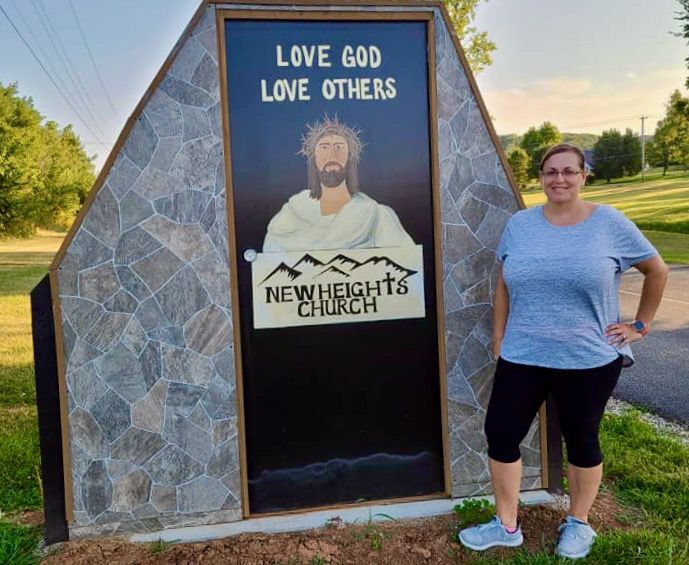 Lisa Burch of Farmington stands next to a decorated door at New Heights Church — one of 18 that are currently on display as part of the Farmington Regional Chamber of Commerce's DOORS on Tour Project. Burch was the grand prize winner of a Blackstone Griddle as a contestant in the chamber's recent photo contest. 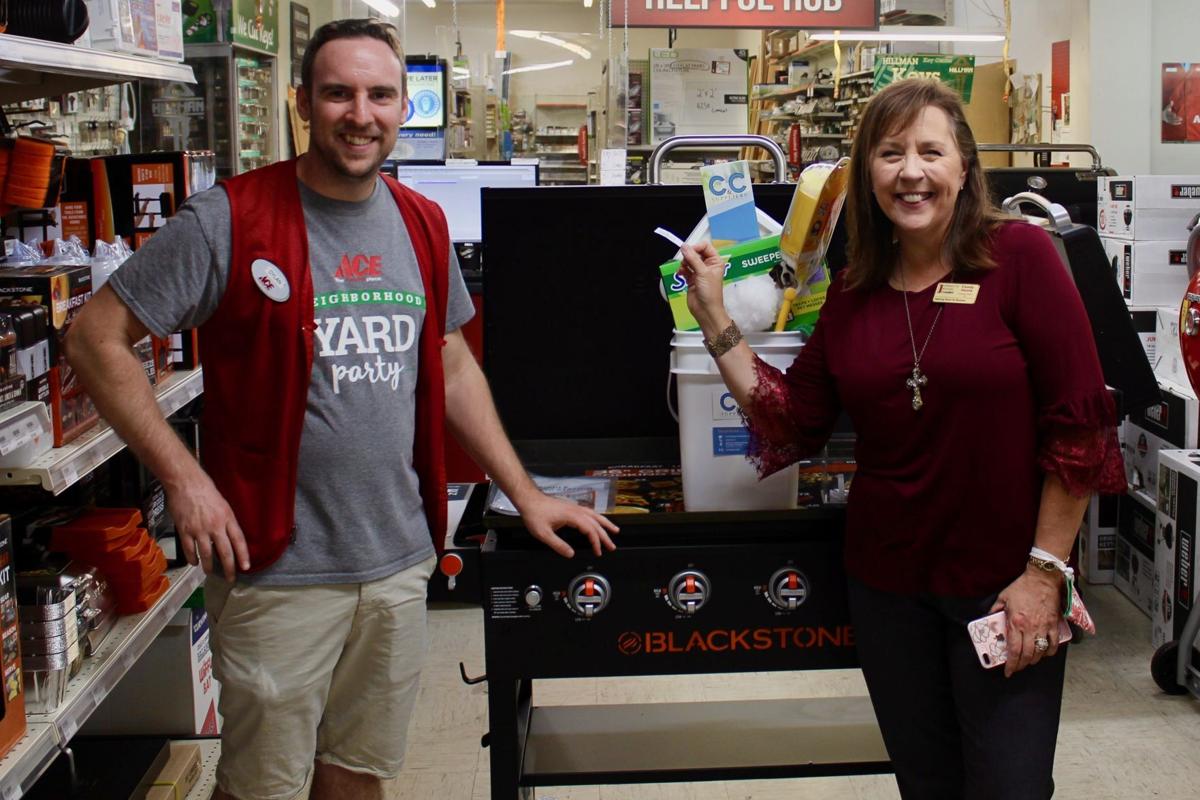 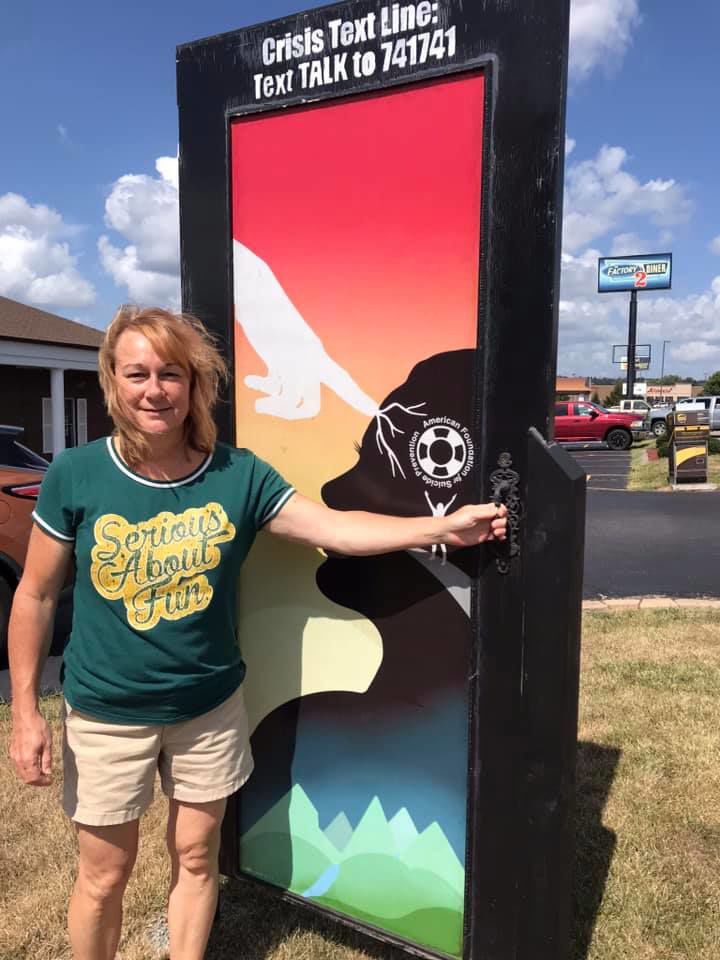 Robin Rodgers of Farmington wears a "Serious About Fun" T-shirt, one of the many outfits she wore that resulted in her winning a special award for creativity in the Farmington Regional Chamber's Doors Photo Contest.

It’s been a little over a year since the Farmington Regional Chamber of Commerce came up with a creative and memorable way for visitors to remember the community.

“Our community needed something we could rally around that was positive to talk about instead of everything else that’s going wrong in the world,” said Candy Hente, chamber executive director. Our director of events, Cassie Thomas, and I were holding a brainstorming session one day when I said, “The Farmington Regional Chamber motto is ‘Opening Doors for Business” and we’re also known as ‘The Doorway to the Parkland.’ What if we used doors to promote our community?”

And that’s how “The DOORS on Tour” came to be.

Hente and Thomas brought together a group of around 20 artists who agreed to lend their creative expertise to the project.

“It was like a ‘who’s who’ in the local art community sitting at the table,” Hente recalled. “We were so excited! These were very highly recognized talented individuals, so we were thrilled they wanted to be a part of the project. They were excited too. We tried to match the artist’s expertise with the theme that the business chose. The artists could do any type of art. I told them they had complete creativity and free rein.”

Hente described the artists as “incredible,” and they delivered the goods. Every door was a work unto itself. No two were alike. They had different subjects and various forms of art were used to complete them. The artists put themselves into the works they created, and the results were amazing.

Over the summer, Hente and Thomas came up with the idea of holding a photo competition involving the doors.

“The only thing we asked is that they go to visit at least five of the 18 doors, take a selfie, and then post those five pictures in the Doors on Tour Facebook group," Hente said. "After they did that, their name would be entered to win a brand-new Blackstone Griddle valued at almost $400.”

“We decided to do the contest for a variety of reasons. One, is we wanted everyone to go out and see this beautiful artwork that has been created — customed for our community. Secondly, we wanted to encourage people to visit the local businesses that have supported the creation of this art. Thirdly, we wanted to do it because it’s just a fun activity people can do that’s safe during the times that we live in with social distancing.

The contest ended up with a total of 33 entries — an excellent response for a contest that required more time and effort than simply filling out an entry form and dropping it in a box.

“The really fun thing about it was that the people who did it thoroughly enjoyed it,” Hente said. “You can see they had so much fun — the smiles on their faces. A couple took their kids. There was one lady in particular that dressed up in different costumes matching the doors. That was Robin Rodgers of Farmington, and we gave her a special award for being the most creative. She won an awesome bucket of cleaning supplies from C&C Suppliers.”

The drawing for the grand prize was held Sept. 2 — right before the Labor Day weekend — at Plummer’s Ace Hardware. The winner of the Blackstone Griddle was Lisa Burch of Farmington.

“She could hardly wait to get down there and pick up that griddle,” Hente said with a chuckle. “Plummer’s told us they’re having a hard time getting them in, they’re selling so fast. Of course, with some of the supply chain issues, they’re sold out and they can hardly keep them in stock.”

Asked what the future of the DOORS on Tour project, Hente said, “We are kind of in the consideration phase of that. We’re going to be speaking with the sponsors and let them be a part of making that decision. We’ve had to repair a few of the doors and so there may be some that we’re taking down.

“We’ve already had a few people saying, ‘Hey, if you do this again, we want to have a door. We’re not making immediate plans to do something like that, but we do know there’s an interest, so we’re taking that into consideration. We’ve also had people from outside the community who come here just to see the doors. There was a lady that was an artist who visited from — I believe it was Alabama — and she actually said, ‘I want to go home and make a door and bring it and you can put it anywhere you want.’”

“The really fun thing about it was that the people who did it thoroughly enjoyed it. You can see they had so much fun — the smiles on their faces." –Candy Hente, chamber executive director

In a message sent out late last week by the Farmington R-7 School District, it was announced to parents and guardians of students that a mask …

This week's Take a Guess is a tool used several centuries ago, but no longer used today — and that's a good thing. Do you know what it is call…

This story originally appeared in the Sept. 4, 1931 issue of The Farmington Press. – Editor

After taking a year off due to the Covid-19 pandemic, Discover Farmington's Blues, Brews, & BBQ returns Sept. 17-18  to downtown Farmingto…

Variety of services offered to veterans who feel alone

Veterans from all eras are reacting to the events in Afghanistan with the U.S. withdrawal and the takeover by the Taliban.

Glore Perez Gaekel was presented the Americanism Award at the Sept. 4 meeting of the Sarah Barton Murphy Chapter of the National Society Daugh…

The Family Emergency Preparedness Fair saw an impressive turnout on Saturday — the 20th anniversary of the 9/11 terrorist attack on America.

Lisa Burch of Farmington stands next to a decorated door at New Heights Church — one of 18 that are currently on display as part of the Farmington Regional Chamber of Commerce's DOORS on Tour Project. Burch was the grand prize winner of a Blackstone Griddle as a contestant in the chamber's recent photo contest.

Robin Rodgers of Farmington wears a "Serious About Fun" T-shirt, one of the many outfits she wore that resulted in her winning a special award for creativity in the Farmington Regional Chamber's Doors Photo Contest.