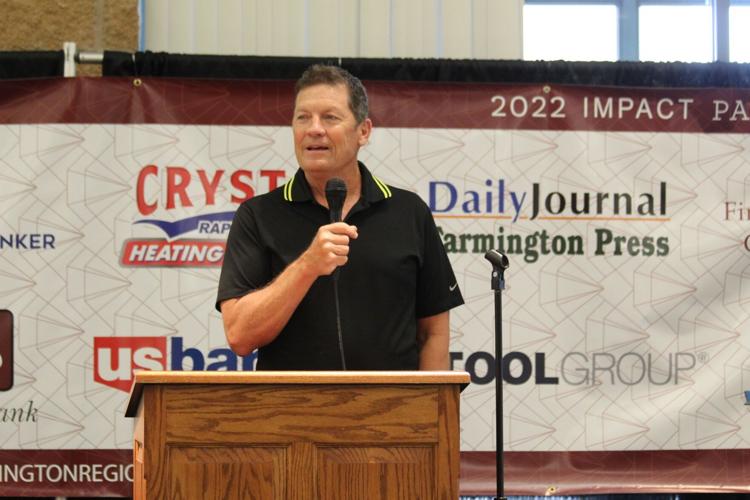 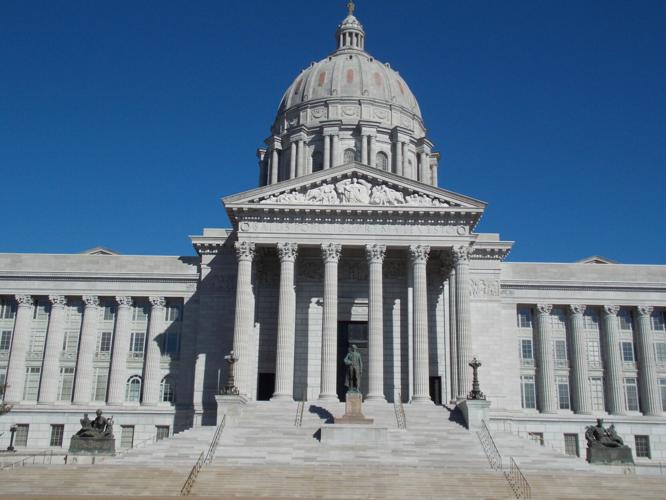 This year, the Missouri Legislature passed the largest budget in the history of the state. 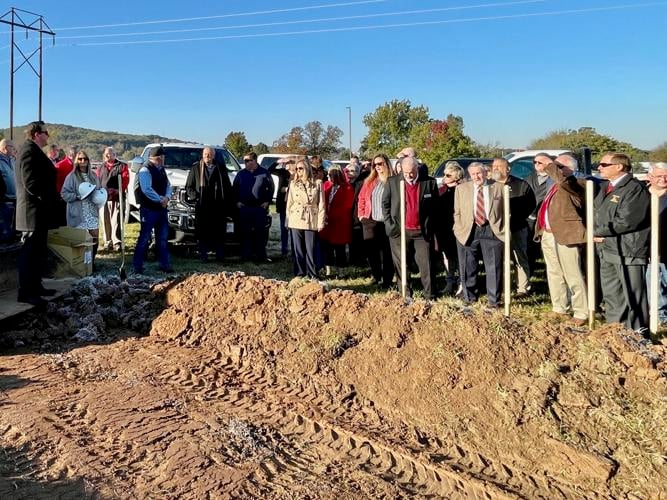 Dr. Joe Gilgour, Mineral Area College president, addresses the crowd that came out on the morning of Nov. 4, 2021 to take part in a groundbreaking ceremony for the Workforce Innovation and Education Center being built on campus. The state legislature added $5 million to the state budget for its construction. 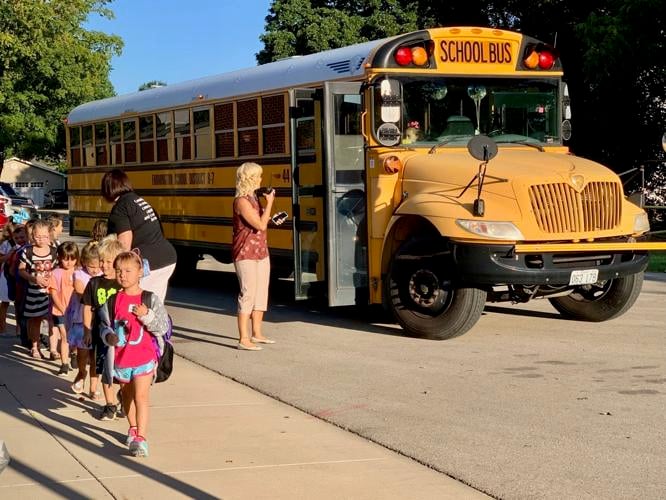 Rep. Mike Henderson told attendees at the June 16 chamber luncheon that school transportation was fully funded in this year's state budget for the first time in "probably 30 years."

State Representative Mike Henderson, R-Desloge, provided an overview of the 2022 Legislative Session when he served as guest speaker at the Farmington Regional Chamber of Commerce Business and Community Luncheon held June 16 at the Centene Center.

“I want to tell you a little bit about the session and how I would describe it,” he said. “What came to mind was the good, the bad and the ugly. The good was that we had an outstanding budget. We were able to do a lot of great things in the budget. The bad thing was a lot of it was coming from the federal government as it was pass-through money.

"Some of this is my opinion. I don’t know how my grandkids or great-grandkids will pay some of that back. I think we are seeing that with the inflation we’ve got now and the Federal Reserve raising interest rates.”

According to Henderson, the new state budget totals $46.5 billion, the largest in the state's history. “There were two things that actually contributed to it," he said. "All the federal money and we had the highest sales tax general revenue the state has ever had. People were spending money.”

Henderson highlighted several items in the budget that received increases this year.

“As far as education, we fully funded it,” he said. “For the first time in probably 30 years we fully funded transportation. We put back in the teacher career ladder and we are funding it 60/40 from the state’s portion. Why is this big? We know we are looking at a possible teacher shortage in the next few years.

“We have $75 million to close the learning gaps for those affected by the pandemic. We know there was some areas where kids were affected. We were lucky. Our kids weren’t out nearly as much. Some of the kids in St. Louis didn’t have in-person learning for a year-and-a-half. In my opinion, virtual learning isn't as good as in-person because I value what the teacher does.”

Other items that Henderson mentioned was $31 million in new funds budgeted for MoExcels to use for employer training and more than $300 million has been budgeted for broadband expansion.

“My opinion is that during my lifetime it will be thought of as the same as electricity,” he said. “When you move into a house, you will expect to have broadband. We know a lot of businesses look at that when they are looking to move to areas, too.”

“There’s a lot of other things, I just picked some highlights," Henderson said. "I could be here an hour just going through the budget items. I think we spent the money well.”

He noted that the state set aside about $1 billion to avoid budget shortages in case of a recession, something he thinks is highly possible.

Henderson also informed the crowd that the state is slated to receive $8 billion in infrastructure money next year.

He next covered the legislature's redrawing of congressional maps — what he called the “ugly” part of the session.

“It dominated the entire session,” he said. “Every 10 years we have a census and we redraw congressional districts. In my opinion, some of them in the Republican Party and some of them in the [Democratic] Party were looking at manipulating the maps that they thought it would be better for them in running for office. We were out of Jason Smith’s district at one time and [were placed in] a district that went all the way to St. Charles and Frontenac, which I didn’t think we really fit that area.

"In the end, I think we got a congressional map that is OK. Washington County may not feel that way. They are still in that long string district that goes all the way up into St. Charles. It held everything up. The House functioned, but in the Senate, they were filibustering pretty much every day. They were filibustering the journal. The journal was just a record of everything from the day before.”

When all was said and done, Henderson believed the legislature was able to get some legislation completed. He went on to list several bills he sponsored, as well as other bills that were passed.

“I sponsored initiative petition reform, which is where they put things on the ballot in about 32 words that describe a sometimes 200-page document,” he said. “Mine dealt with the Missouri Constitution. It came out of the house in the second week of session. The Senate held it up — it was filibustered by the Democrats. Why did I think that was important? Here’s an example — recreational marijuana will get on the ballot this time. If it does, I think it passes. I am not in favor of recreational marijuana.

Henderson sponsored a bill tying the funding for higher education to measurable results. “I think we are going to do a study this summer on it,” he said.

Henderson believes that the $5 million added to the budget for Mineral Area College's construction of a new tech center will prove to be a "huge benefit" for the area. “I think there will be more money in the budget next year to finish that off and get the tech center built over there,” he said.

Henderson moved on to other legislation passed during the session.

“Election integrity,” he said. “We still left in two weeks of no-excuse absentee voting. I think everybody loves that. We [approved] no voting machines that are hooked to the internet. Paper ballots. Voter ID. If you don’t have your ID, you can still vote if it matches up with your signature or you can bring your ID in later. In Missouri, I think our elections are good, but we heard from a lot of people that we want to make sure that our elections are fair to everybody.”

A subject that Henderson heard about often during the pandemic ultimately became the "No Patient Left Alone” Act.

“We had people dying in nursing homes and hospitals and because of Covid, there were some issues with being able to get in and see their loved ones,” he said. “The legislation allows patients in healthcare facilities to have two compassionate care visitors to provide mental or physical support. I think we did this the right way. We negotiated with the hospital association and other healthcare providers to enact this legislation.”

Other education initiatives passed by the legislature included an expansion of virtual education opportunities in case of a future pandemic. Also, Henderson explained that a shortage of substitute teachers in Missouri's public schools resulted in the legislature reducing the qualifications for subs from 60 hours to 36 hours. Fast Track, which is designed for adults to attend technical schools to quickly learn new skills for better employment, also passed.

“We didn’t pass a lot of consequential legislation overall,” Henderson said. “It was probably the most frustrating session I’ve been through. I think we are going to have a better session next year. I think the feedback from people is, 'we sent you all up there to get some things done,' and I think a lot of people are receiving that. It wasn’t on the House side, it was on the Senate side. It wasn’t your senator, she wasn’t filibustering anything. I’ve never seen Elaine (Gannon) that frustrated. She almost used a bad word once or twice. They would be there all night reading a book.”

Henderson finished his presentation by taking questions from the audience. In response to a question about mental health, he said the legislature set aside additional funding for mental health in the new budget.

“The problem I see with it is we don’t have people trained," he said. "We could put $5 billion toward it, but we can’t hire people that have the expertise.”

It’s time once again to start making plans to attend this year’s annual Parish Picnic at St. Joseph Catholic Church when it returns next month…

As of June 16, the offices in the St. Francois County Courthouse Annex, located in downtown Farmington, are closing at 2 p.m. on days when the…

This impressive-looking gadget had a very important purpose back in the 1800s. Do you know what it is? If you think you know the answer, send …

The Mineral Area College dean’s list has been announced for the spring 2022 semester.

The following materials were added to the Farmington Public Library during the month of June 2022. (• Updated 6-15)

“She has more energy than I know what to do with,” chuckled Robert. “I wish I had a fraction of her energy!” The proud dad spoke affectionatel…

This year, the Missouri Legislature passed the largest budget in the history of the state.

Dr. Joe Gilgour, Mineral Area College president, addresses the crowd that came out on the morning of Nov. 4, 2021 to take part in a groundbreaking ceremony for the Workforce Innovation and Education Center being built on campus. The state legislature added $5 million to the state budget for its construction.

Rep. Mike Henderson told attendees at the June 16 chamber luncheon that school transportation was fully funded in this year's state budget for the first time in "probably 30 years."