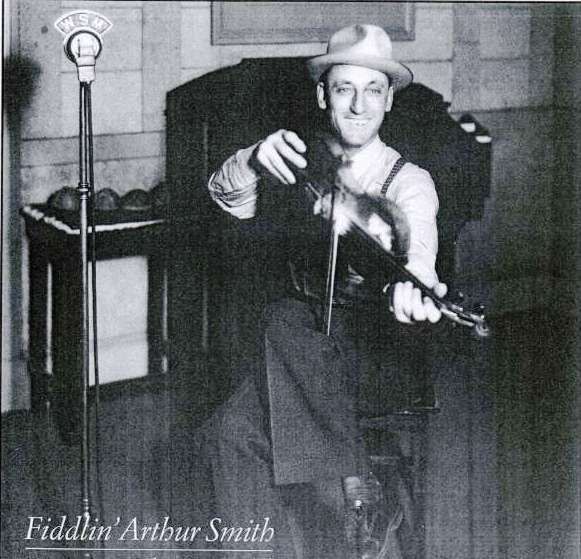 Arthur Smith playing on the Grand Old Opry on station WSM in Nashville. 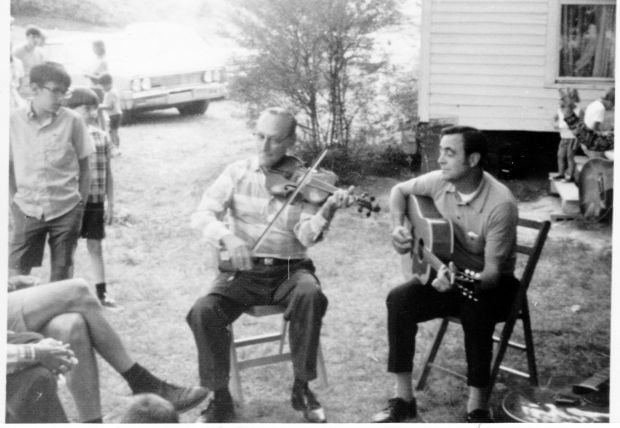 It was a family reunion at Granny's house. Arthur (left with fiddle) and a brother playing for family members. Grandson Dennis Smith is in the far background at left and his brother, David, is standing at left front. 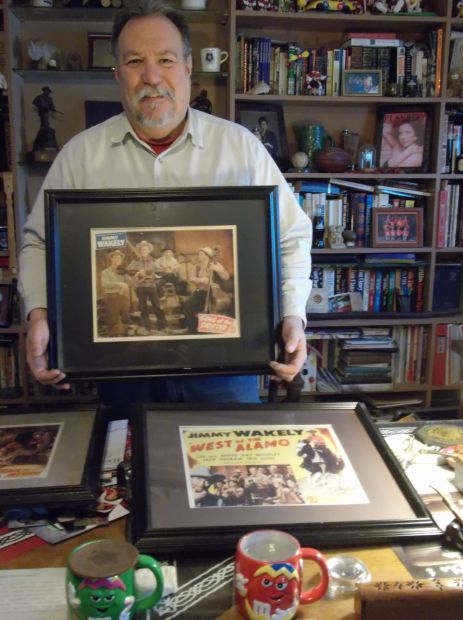 Arthur Smith was a renowned fiddler from the 1920s through the 1960s who became part of the fabled cast of the Grand Old Opry in its early hay-day; was a composer, toured with many of the big-name country stars of the time, appeared in cowboy movies and was dubbed the "King of the Fiddlers" by Country Western legend Roy Acuff. He was known on many accounts as the most influential fiddler in country music and received recognition for his contributions to his music by being honored this year with his name placed in the National Fiddlers Hall of Fame. In 2003 he was named as one of five recipients of the Distinguished Achievement Award by the International Bluegrass Music Association.

But to Dennis Smith of Farmington, he was just "granddad."

Dennis admitted that as a young boy he never paid much attention to his granddad's music or fame.

"I heard him play, because it was a family tradition for the entire family to gather at the home of granddad and granny's every 4th of July in Dickson, Tenn. There was always lots of music because he and some of his brothers, cousins and whoever else stopped by would get together out in the side yard and play whatever came to mind." Dennis grinned and added, "I never hung around listening much as I'd be off with my cousins climbing trees.

"I was the oldest of three brothers, and my middle brother David liked to stay around and watch them. He learned a lot, I guess, just by listening to them, because he still plays guitar but never mastered the fiddle. No one in our entire family did. Several of them can play guitar, piano and sing, but there's not one fiddler!"

Smith was born and raised on a farm in Bold Springs, Tenn. and learned his craft early, probably having inherited the musical gene from his father who was a fiddler. Sadly, his father died when young Arthur was only five and never got to see the heights to which his son would take his talent. But family lore tells of young Arthur as a boy of five trying to play the fiddle by propping it up on the floor.

Arthur married at the age of sixteen his equally young bride, Nellie, who could play the guitar. Nellie also sold chickens to help him get his own fiddle. By 1921 they had started what would eventually become a large family of thirteen children: seven boys and six girls. Dennis Smith's father, Donald and his twin sister Dot were born in about the middle counting of the siblings' ages.

With a wife and growing family to support, the Smiths moved to Dickinson, Tenn. where Arthur went to work cutting crossties for the N.C. & St. L. Railroad that was known popularly as "The Dixie Line." He eventually was promoted to maintenance, where he travelled across the state with a repair crew. Nights he spent fiddling and swapping tunes with other musicians he met along the way. He also entered several fiddle contests across the state and won most of them.

In 1926 he met another Dixie Line employee, David Stone, who worked part-time on the new Nashville radio station, WSM. He put Arthur in touch with the general manager who invited Arthur to join the case of a country show that would soon be called the Grand Ole Opry. Arthur's cousin Homer Smith, who played guitar and sang, joined him as back up, and they both became regulars on the show.

Arthur and Homer made lots of fans but not much money, so they both kept their day jobs and would drive to Nashville for each of their performances. In 1932 they broke up their act, and Arthur joined Sam and Kirk McGee and his daughter, Lavonne played piano. The group soon became the most popular string band in Opry history—"The Dixie Liners." They were favorites on the air and on the tours they made through the depression-weary south. They were especially loved in remote mining towns scattered throughout the Appalachians. The miners even got up a petition for the group to be moved to an hour on the Opry so they could listen to them between shifts.

The McGees recalled that they worked to get Smith to loosen up on stage. "He was sort of somber and a little stiff. He took his fiddling seriously and felt all he should do was stand there and play." Finally, they started working on him to sing, and he had a nice, low-key sort of voice. They later said, "After we finally got him to sing, we couldn't get him to stop."

Arthur wrote a lot of his own music and got even more interested in it when he began to tour some with the Delmore Brothers in late 1934. Soon a series of vocal record, featuring Smith the Delmores came out on the Bluebird label. Some became country standards: "There's More pretty Girls Than One", "Pig at Home in the Pen", "Walking in My Sleep", "Love Letters in the Sand", and his signature song, "Beautiful Brown Eyes". Roy Acuff performed and recorded the song that became a popular hit.

Other records on the Bluebird label he cut between the mid-30s and 1940 were a series of what became fiddle masterpieces that bowmen all over the country tried to copy and are still heard today at fiddler's contests. Included were: "Indian Creek", "Sugar Tree Stomp", "Smith's Rag", and "Cheatham County Breakdown."

As he continued the hard work it took to maintain two full-time jobs, on the railroad and as a professional musician, he began drinking and was suspended for three-months in 1938 from the Opry for missing two shows. With assistance from Roy Acuff, he eventually returned to the music circuit.

Over the years he joined several different groups, some already established and some he organized including "The Band of Arthurs" made up of other musicians all named Arthur and his daughter Lavonne. In the 1940's he published two songbooks, "Songs From the Hills of Tennessee" and "Arthur Smith's Original Song Folio No. 1".

In 1945 Gene Autry's manager put Arthur in touch with the popular cowboy singer Jimmy Wakely. Wakely hired him to go to California and become a regular member of his band. For the next three years he worked doing Wakely's radio show and personal appearances and even appearing in several films such as The Lonesome Trail, Saddle Serenade and Song of the Range. (All of these were probably viewed by many local residents here at the old Ritz Theater.)

Wakely played places in Lake Tahoe and Las Vegas and recalled how the patrons at one famous hotel reacted to Arthur's fiddle music. "Many came from New York and had never heard a country fiddle played. When he started playing people would just go wild, dancing and yelling." Arthur was featuring specialties like "The Orange Blossom Special", a song he didn't write but was the one to first take it to a national audience and make it the fiddle standard it is today.

In 1950, Arthur left the music scene and returned to his home in Tennessee. Then in 1957, when folk music was the big thing in music, folk musician Mike Seeger talked him into picking up his fiddle again and rejoining the McGees for a reunion of the Dixieliners. The result was a couple of LP's and a renewed popularity. Arthur renewed his ties with Nashville and continued to write songs, one "Why Did You Go Away" was recorded by Marijohn Wilkin and Don Pierce recorded a Starday LP featuring Arthur and his son Ernest. Eventually, he went into semi-retirement, playing only at local events in southern Tennessee. In 1969 he made his last appearance that summer at Bill Monroe's Bean Blossom Festival.

He spent his last months in Louisville, and died there of cancer on Feb. 28, 1971. Roy Acuff announced his passing on the Grand Ole Opry, and it was then he dubbed him the King of the Fiddlers.

He had worked with all of the greats in country music of the 1920s, 30s and 40s and was considered the best of them all. But for the younger members of the family, who gathered with their parents to see him to his final resting place in the majestic hills of west Tennessee where he started, he was something of an enigma: the man they saw only about one or twice a year and played at the yearly reunion.

"I never saw any of the movies he was in, or saw him perform," said Dennis Smith. "Other members of his family did, of course, but he just wasn't a big part of my life. I loved to visit Granny, and would visit with her pretty frequently growing up. She was a great cook and the one who kept us all together. She has passed away also now, but on the 4th of July the Smith family still gathers for a reunion in Dickson, Tenn."

As important as Arthur Smith's contribution was to country music, perhaps his greatest legacy is the one he only infrequently was able to enjoy but continues to this day: the close ties of his family.

Editor’s note: Much of the information came from a story written by Charles Wolfe, titled "Fiddlin'Arthur Smith" on Arthur Smith's life and music.

Arthur Smith playing on the Grand Old Opry on station WSM in Nashville.

It was a family reunion at Granny's house. Arthur (left with fiddle) and a brother playing for family members. Grandson Dennis Smith is in the far background at left and his brother, David, is standing at left front.