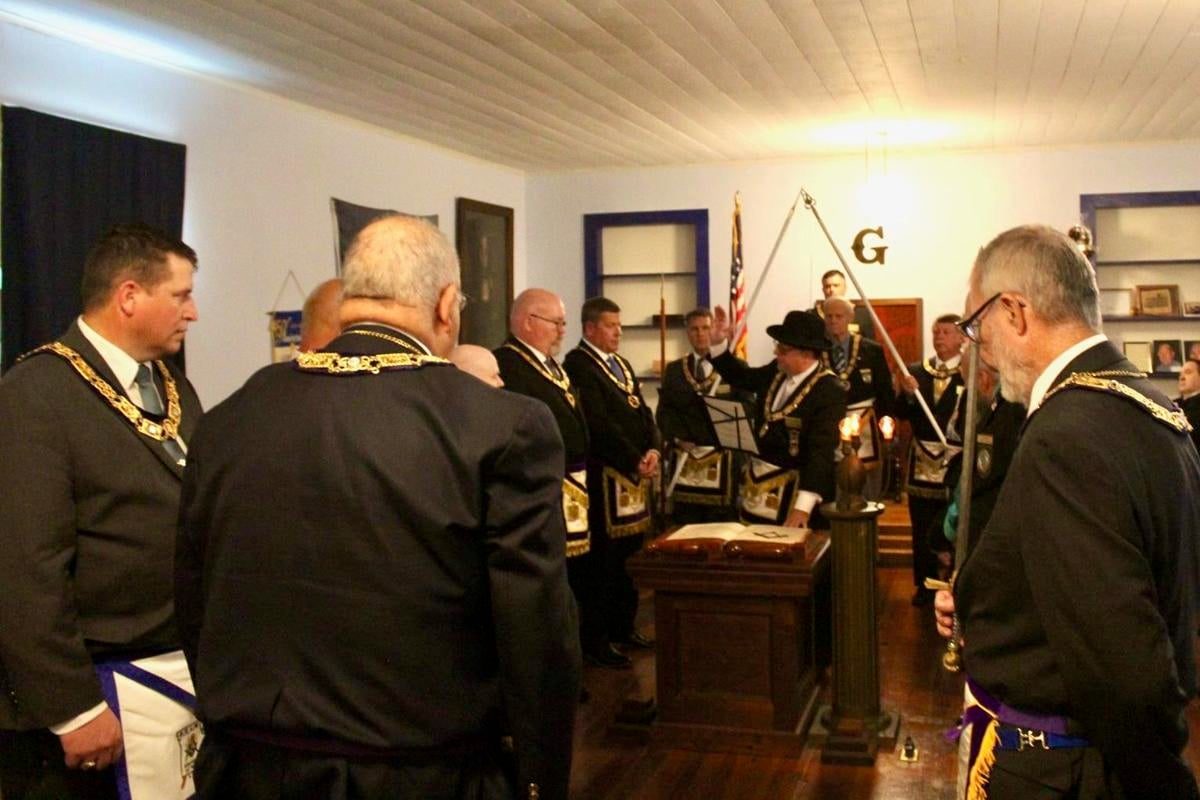 Dr. Ty Treutelaar, wearing hat, grand master of the Grand Lodge of AF & AM of the state of Missouri, presides over the Retiring of Charter Ceremony at Saturday's closing of St. Francois Lodge No. 234 in Libertyville. 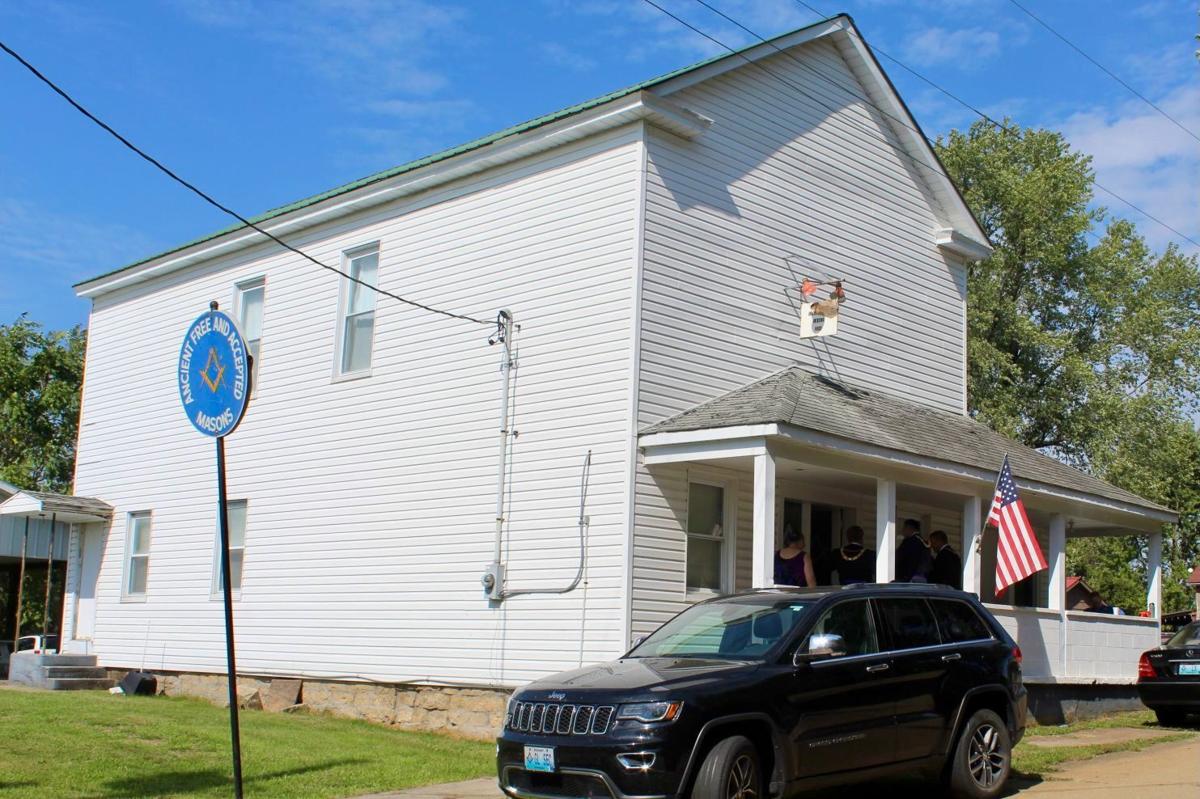 St. Francois Masonic Lodge No. 234 in Libertyville has closed its doors after 157 years of continuous fellowship. 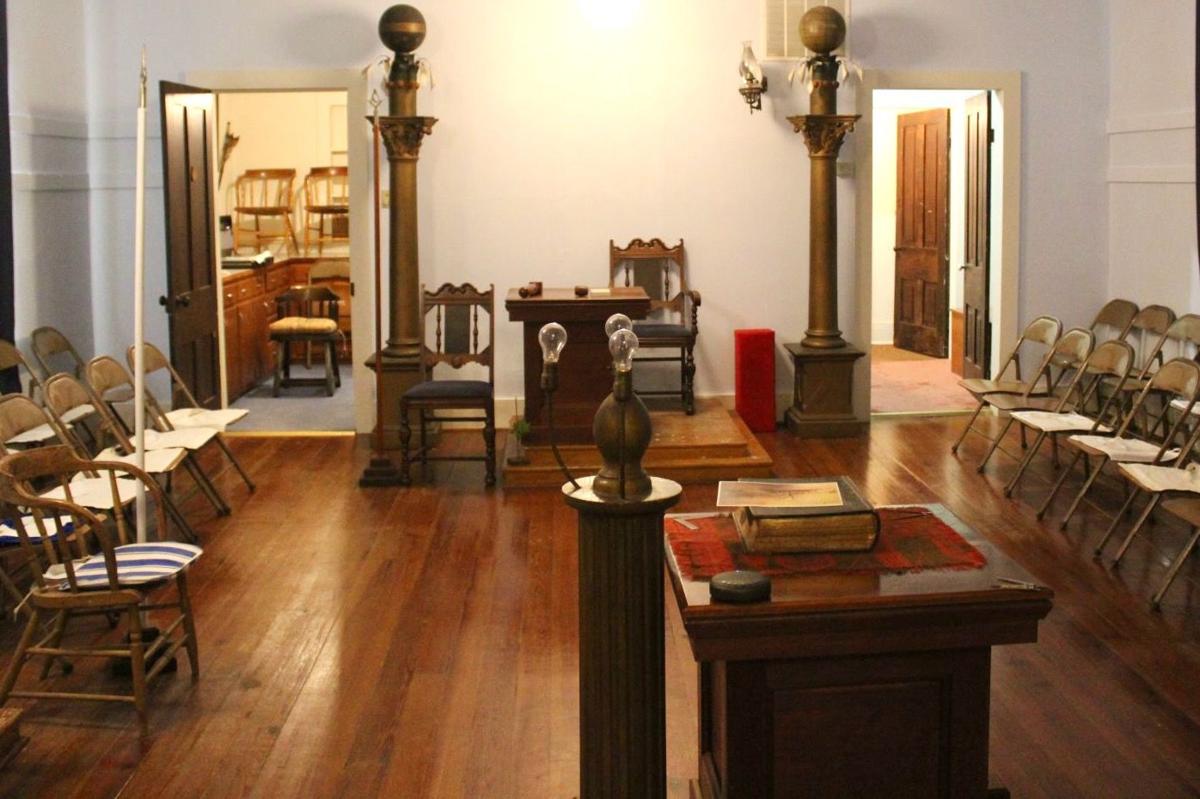 A historical era in Freemasonry has come to an end with the closing of St. Francois No. 234 Lodge in Libertyville. The membership is merging with the Masonic lodge in Farmington. 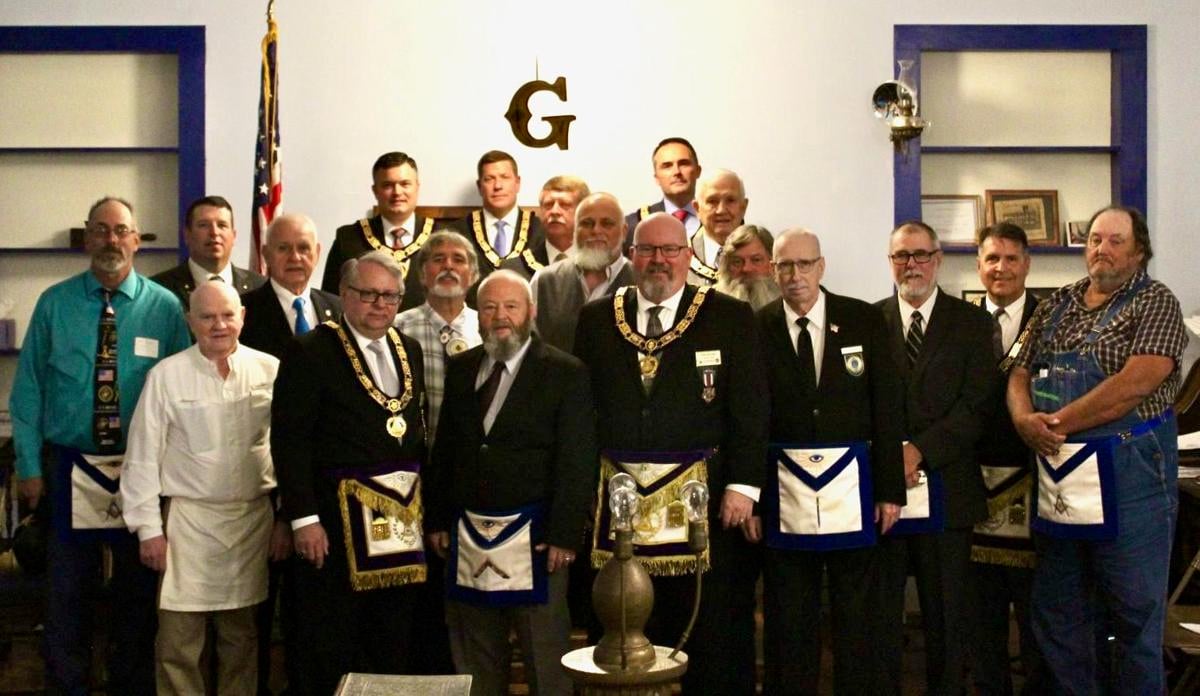 Officials from the Grand Lodge of AF & AM of the state of Missouri presided over the Retirement of Charter Ceremony at the St. Francois Lodge #234 in Libertyville Saturday.

The small settlement of Libertyville saw the end of a historic era with the closing Saturday of the oldest operating Masonic Lodge still meeting in its original building, west of the Mississippi River.

St. Francois Masonic Lodge No. 234 closed its doors after 157 years of fellowship with the remaining members merging with Farmington Masonic Lodge No. 132. In an interesting convergence of opposing events, the last meeting of the lodge is the first ceremony held for the retirement of a lodge's charter ever held in the state of Missouri.

Worshipful Master Wayne Hutchings gave a history on the founding and operations of the lodge.

“The history of this lodge is that 13 people from the Farmington lodge in 1863 petitioned to Missouri’s Grand Lodge for a charter to begin this lodge,” he said. “It was chartered in 1864. This building was started in 1865 and finished in 1866. We have had regular meetings once a month in this building since 1866. It is the oldest lodge west of the Mississippi that was built as a Masonic lodge and had continual meetings.”

Hutchings explained that, while the Farmington lodge's charter is older than Libertyville's, the building it meets in is not.

“Some lodges, through natural disaster or making a whole bunch of money, would be forced into starting another building,” he said. “There are lodges that are older, but they are not meeting in the same building.”

According to Hutchings, because the Libertyville lodge's membership and funding were dwindling to the point of unsustainability, the remaining members decided they would have to close.

“We explored merging with another lodge and decided to merge back with the Farmington lodge,” he said. “After today’s retirement of charter, that’s what will happen. We will become members of Farmington’s lodge once again as our brothers were in 1863.”

Of course, the building will remain and be given to a neighbor who is a member of the lodge and intends to preserve it in its current state.

On the second floor where the meetings are held, it’s as if time stood still for decades. Hutchings pointed out several items that were original to the founding of the lodge. There are scrolls dating from 1875-1880 that were formerly used by lecturers to explain the different degrees of Masonry to initiates. Sitting in a corner of the room is a secretary’s desk from 1875 where generations of Masons recorded minutes of meetings. Hanging on the walls are coal-oil lamps with reflectors.

“Electricity didn’t come here until 1935,” Hutchings said. “Until then, they used coal oil lamps. These are original to the lodge.”

In the center of the room is an altar on which lays an 1859 King James Bible. The Bible is the original one used by the lodge. It was semi-retired and only used for special occasions. Hutchings said that Masonic lodges always have an open and illuminated Bible during their meetings.

He pulled a vintage candelabra stand out of storage.

“We have three candelabras original to the lodge,” Hutchings said. “We use these occasionally for what we call a lamplight meeting. We forgo the electric and have nothing but coal-oil lamps and candles.”

By current Masonic standards, the lodge is a small building with limited space in which members can conduct their rituals. Some items had already been moved out of the room to accommodate more people. For instance, Hutchings pointed out two antique chairs sitting on a counter in a back room.

“We took all of our chairs out of the lodge so we could seat all of our people,” he said. “These barrel chairs — we had 60 of them. These are original to this lodge. We have the receipts for them where they come down the Iron Mountain Railroad for $2 apiece in 1870. We took most of them to Farmington.

“There is a wood stove downstairs from 1870, and it used to set up here. That’s how the lodge was heated until about 1999. It was ridiculously uncomfortable. If you were setting by the stove, you were sweating. If you were across the room, you were freezing.”

Hutchings lamented the end of the lodge in which he and his fellow Masons had been very active for decades.

“We are losing a lot of history here,” he said. “It’s just a shame, but we just don’t really have a community around here anymore. A lot of the older members of this lodge lived around here. I came in this lodge in 1976. I was initiated into this lodge and a lot of the people around here — and belonged here — they lived in this community.

“We had a member of our lodge — his brothers were 50-year members of this lodge, which is a quite an achievement. Our goal was to try to keep us open long enough for Tom Sloan to get his 50-year pin. We did that a few years ago. Then we thought we could make it last a little longer and we did.

"We changed some things. We changed our meeting day and time. We did some things and it helped. This was always a pass-the-hat type of lodge. We put a roof on this lodge about 20 years ago. The way we did that, we had a Valentine’s dinner that we had every year. At the Valentine’s dinner, we said, 'We need to put a roof on the building for $33,000.' We didn’t have $300.

"We took money and IOU’s from members. We raised enough money there at that dinner — wrote everybody’s name down and how much they donated — and we raised enough money at that dinner to put a roof on the lodge. Then, we had fundraisers and auctioned this and that, and everybody that wanted their money back, got repaid. We were not a lodge like in St. Louis that has CDs forever and someone has left them money.”

Hutchings considers Masonry to be an integral part of America's beginning and development as a nation. It has often been misunderstood, however, with some calling the Freemasons “devil worshippers,” among other things.

A central part of the historic closing of this historic lodge, was the Charter Retirement Ceremony. Dr. Ty Treutelaar, grand master of the Grand Lodge of AF & AM of the state of Missouri, helped in the development of the new ceremony as a way to properly recognizing the lodge members’ past efforts.

“It’s based loosely on our rededications,” he said. “It’s almost a reverse of how you would dedicate a lodge. A lodge is the men. Lodges are made up by the men, it’s not the building. When you retire a charter, it means that those men are going to a different lodge.

"We never retired a charter, we just canceled them. Now we can retire them and those men can feel like they did make a tough decision, but have a future. I think that’s the most important thing — that they really did it right.”

As grand master, Treutelaar presided over the meeting and led out in the ceremony.

Speaking to those assembled, he said, “The ceremony you see sprang out of the head of (Right Worshipful Brother) Emmett Bryson several months ago. It is a unique one based on some other historical pieces. We also bring it together at the end with probably one of the oldest pieces of ceremony of Freemasonry.”

Treutelaar spoke about his close ties to the Libertyville lodge, mentioning a member named Vincent Kinkead who had died. He gestured toward a spot near the front of the room.

“Boy, Vincent would be mad at you guys today,” he said. “You took his chairs out. Vincent Kinkead sat there. What was fun about opening this lodge, closing this lodge, being in this lodge, was you knew something wasn’t necessarily going right or wrong. If Vincent didn’t like it, there was this, 'Humph!' Either way — if it was good or bad — he was right over here.”

A historian at heart, Treutelaar marveled at the condition of the original charter document. “We may have to have a discussion about this charter, because I have never seen a charter of this vintage in the absolutely amazing condition it is in. It is an amazing document, I have never seen anything like this. It is museum quality.”

After the meeting, Treutelaar spoke of the honor he felt in presiding over the retirement ceremony and about his connection to the Kinkead family through their involvement in the lodge.

“This is the first one we have done and I’m very proud to do this for this lodge,” he said. “This lodge and the Kinkead family mean everything to me and how I developed as a Freemason. Vincent Kinkead was a past grand master. He and I got along really well. When he passed away, Evelyn Kinkead gifted me his grand master’s jewel that I will wear through this year with the understanding that I will return it to the Grand Lodge of Missouri to go in their archives.”

The historian in Treutelaar surfaced again in a final comment he made about St. Francois Lodge No. 234.

"That these men had this faith in the future that they were able to do this and create this during the Civil War, that's amazing." – Grand Master Dr. Ty Treutelaar

According to Google Maps, for a person to take a drive from Farmington to San Diego, California, is a very lengthy 1,796 miles.

FSCB president is no fan of proposed Biden plan

As part of the $3.5 Trillion Reconciliation Budget being crafted now in Washington, D.C., a section has been included that will, if passed, re…

The city of Farmington worked on several items of business during their city council meeting held on the evening of Thursday, Oct. 14 in the c…

Farmington Elks Lodge 1765 has announced the names of Farmington and St. Paul Lutheran High School’s Students of the Month for October.

From Farmington to Thailand and back home again

Dr. Ty Treutelaar, wearing hat, grand master of the Grand Lodge of AF & AM of the state of Missouri, presides over the Retiring of Charter Ceremony at Saturday's closing of St. Francois Lodge No. 234 in Libertyville.

St. Francois Masonic Lodge No. 234 in Libertyville has closed its doors after 157 years of continuous fellowship.

A historical era in Freemasonry has come to an end with the closing of St. Francois No. 234 Lodge in Libertyville. The membership is merging with the Masonic lodge in Farmington.

Officials from the Grand Lodge of AF & AM of the state of Missouri presided over the Retirement of Charter Ceremony at the St. Francois Lodge #234 in Libertyville Saturday.