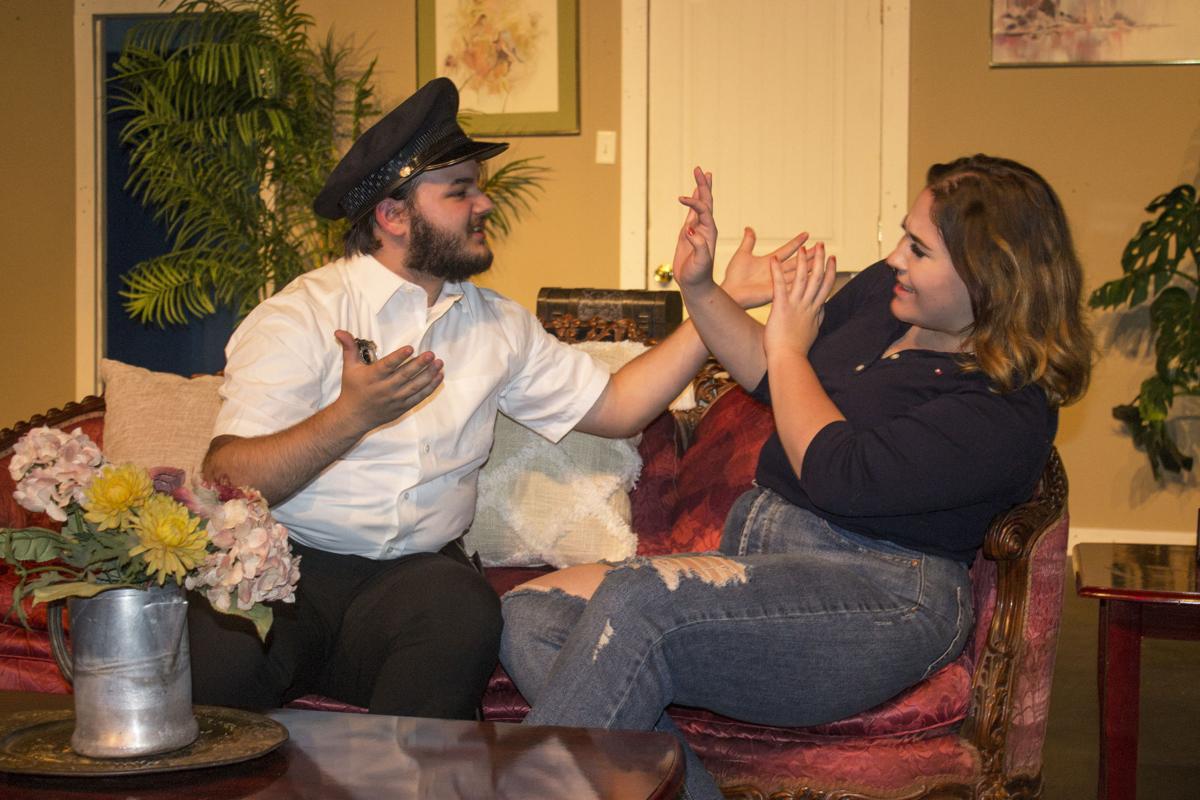 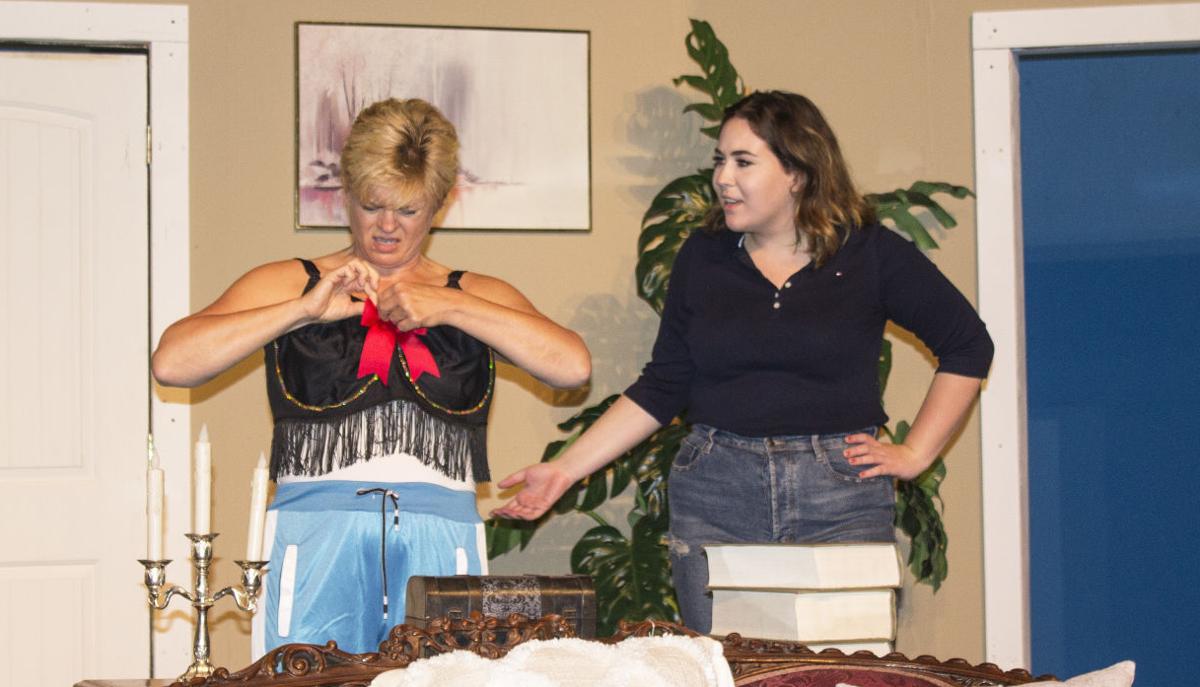 Dawn Fuemmeler plays the role of Sylvia Charles. Here, she tries to get input from Bridget Charles, played by Grace Miller, on the new design of her lingerie.

Carol Burnett, Red Skelton, Lucille Ball — three examples of some of the pioneers of comedy.

Mineral Area College's Director of Theatre, Chuck Gallaher, says the school's Little Theatre Guild's upcoming play is reminiscent of some of the old comedy show reruns featuring these three icons he watched as a kid.

The production — “Nana’s Naughty Knickers” — is the story of Bridget and her grandmother Sylvia. They are about to become roommates. But Bridget soon realizes her unique opportunity to stay with her grandmother in New York for the summer quickly turns into an experience she’ll never forget.

What Bridget discovers is that her sweet grandmother is running an illegal boutique from her apartment, selling handmade naughty knickers to every senior citizen in the five-borough area.

Can Bridget actually handle all of the excitement? Will her grandmother get evicted or even arrested? Area residents won’t want to miss seeing these 9 cast members perform this comedy Oct. 15-17 at MAC’s Fine Arts Theater at 7 p.m. each evening.

Tickets are $7 for adults and $3 for senior citizens and MAC students. Tickets can be purchased at the MAC Bookstore or at the door on the evening of performances (depending on availability) at 6 p.m. Theater doors will open at 6:15 p.m. to better accommodate the audience for social distancing.

All seats are reserved. The first row of seats will not be used because the cast members will not wear masks for the performances. This spacing will provide adequate social distancing between the audience and the cast.

The audience of this production is required to wear a mask and social distance themselves while in the theater and on campus.

A streaming version of “Nana’s Naughty Knickers” will be available for $5 (minimal processing fee will be added to the ticket cost) for those who want to see the show but want to avoid crowds. The performance can be viewed by visiting mineralarea.edu/community/theatre.

Dawn Fuemmeler of Farmington plays Sylvia Charles. She has been involved in theatre since she attended high school more than 40 years ago. She first became involved in MAC productions in 2002, and said she has most enjoyed the camaraderie of the cast.

“Even though Sylvia is almost 30 years older than me, I can relate to her creative spirit and spunk,” she said.

Fuemmeler said she’s really enjoyed working with her friend, Kala Loughary. They’ve been doing shows together since Loughary was 12 and in her first play. Loughary is playing the role of 83-year-old Vera Walters.

“This is my first on-stage performance since I became a mom,” said Loughary. “I have helped backstage plenty, but it has been 11 years since I have been on stage.” One of the most challenging parts of playing the role of Vera has been learning to walk like an 83-year-old.

Loughary said she loves making people laugh and, like Fuemmeler, “adores the camaraderie.” She added she has been in previous productions with many of these cast members and thoroughly enjoys working with them.

Bridget Charles — played by Grace Miller — is a theater major at MAC. “Bridget is a very caring and empathetic person and I am too,” said Miller. “She is also going to law school, which I wanted to do before theater.”

This is Miller’s “first big comedy, which has proven to be a challenge” as she is “much more in tune and in love with drama.” Overall, Miller enjoys the community aspect of MAC theater and working as a team. She also loves getting to play a variety of characters in various productions.

Dave Orzel, who plays the role of “comic villain” Gil Schmidt, has been “going to and enjoying the theater since 1970,” and has occasionally performed since 1995 after his daughters encouraged him to try out for his first play. He said he has done more drama and musicals. Each show and cast are also unique. This particular comedy has been a fun change of pace.

“Comedy is 80% timing,” he said. “Getting the timing and the pace right is important.”

Orzel agreed the current cast is “like a family.” He enjoys the interaction with the cast members and bringing his character’s story to life.

Heaven Griffin is making her debut performance in this show. She has been involved in theater for about five years. Because this cast is so small, she said, the performers have been able to spend a lot of quality time together.

Griffin said she is basically the complete opposite of her character — Heather Van Pree — so it’s “been a lot of fun learning to be so promiscuous.” Before Griffin steps onto the stage officially for the first time Thursday night, she said she hopes to avoid last-minute panic by going over her first cue line.

Bailey Jackson is playing the role of Clair. Jackson has been involved in theater for 12 years, six of them at MAC. She said preparing for the play has been a bit challenging with limitations due to COVID-19, but despite the pandemic, she always enjoys making audiences “feel things, and also (the experience of) becoming someone else.”

Ian Miller, who plays a UPS man, is a returning MAC theater cast member with 11 years of experience.

“A smaller cast such as this provides a wonderful environment to focus on the relationships of everyone involved,” he said. Miller also enjoys time spent with Kevin Bohnenkamp, who plays the other UPS man in the cast.

“Kevin is a long-time friend so getting to work with him is a blast.”

Bohnenkamp has been involved in theater for 13 years. He said he enjoys acting, performing for the community and friendships made through theatre. Michael Cantrell also plays Tom O’Grady, a police officer, in the play.

Gallaher said this performance is “rated PG to be safe, but I think anyone could watch this.”

He said every actor has been rehearsing in a mask which makes acting and speaking difficult. Their rehearsal schedule was also shortened to allow the space to be properly cleaned.

“Our actors have really been troopers throughout the entire process,” said Gallaher. “We are definitely moving through uncharted territory with COVID restrictions and they have been willing to adapt and find ways to alter their performances for the audience under the circumstances.”

Ladies from the Elementary PTA gathered at the Umfleet home on Tuesday evening, Nov. 11, to work on items for their upcoming bazaar. Pictured …

Dawn Fuemmeler plays the role of Sylvia Charles. Here, she tries to get input from Bridget Charles, played by Grace Miller, on the new design of her lingerie.