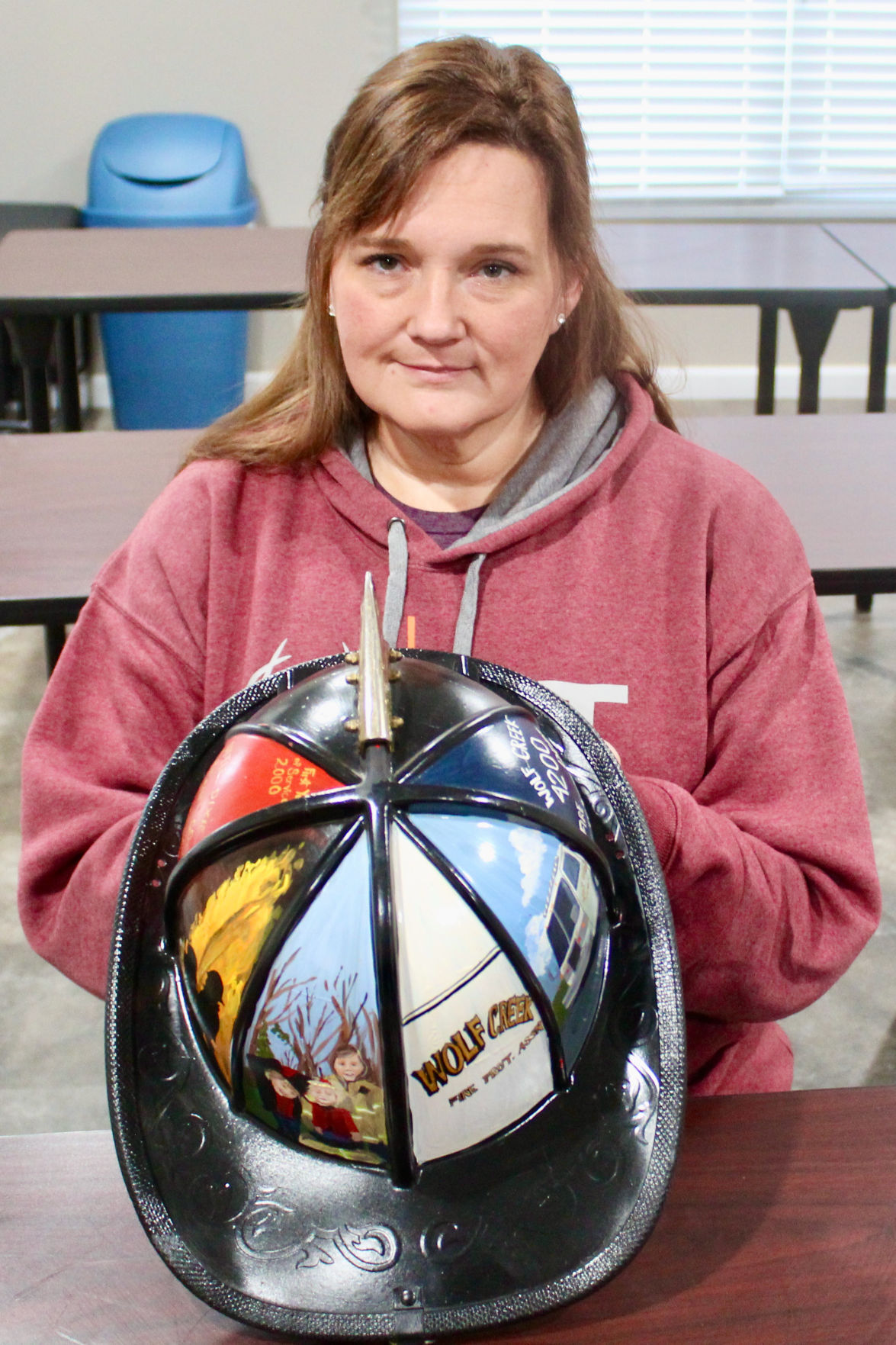 Farmington artist Miranda DeOrnellis is becoming known across the nation for her beautifully decorated fire helmets. In addition to using helmets as her canvas, she also decorates fire axes and ornaments to honor firefighters for their sacrifice and courage. 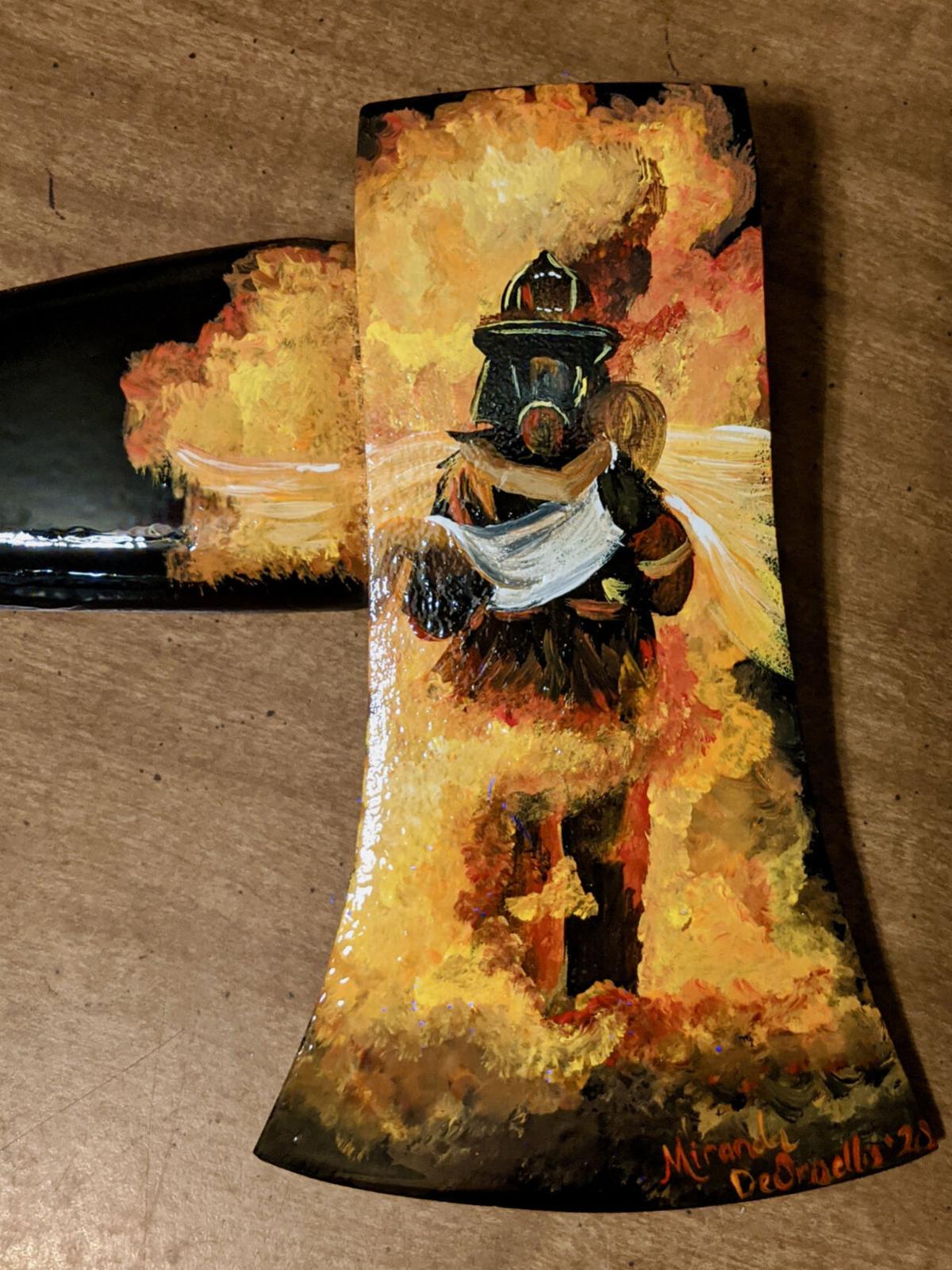 An example of Miranda DeOrnellis using her artistic talents to honor firefighters with a fire axe.

A Farmington artist has become nationally known for the unique way in which she uses the helmets of firefighters as a canvas on which to honor them for their courage and sacrifice.

Miranda DeOrnellis grew up in Womack and has been painting for others since she was 18. “I’ve always been interested in art. I went to college on a full scholarship to MAC for my art. Jim Wilson was my instructor there.”

She is the wife of Wolf Creek firefighter Travis DeOrnellis. Her husband’s service brought about the inspiration for this niche of Miranda's artwork.

“I saw one painted on Facebook and thought I could do that,” she said. “I wanted to do one for my husband in honor of his fire service. It took off from there.”

She displayed a fire helmet with panels painted in different scenes. “I painted this one for my husband a few years ago for Christmas. Every section is just a different depiction or memory from his fire service from the past 21 years. I got my start in painting helmets by painting a different one for him — it just kind of took off from there. I picked up other fire memorabilia stuff that I painted as well.

“He was with Little Dixie Fire Protection District in Mexico, Missouri, for the first 10 years, and then this is his 11th year with Wolf Creek.”

DeOrnellis has created artwork for departments in every state except Hawaii. Along from fire helmets, she also paints different types of fire axes.

“I’ve done canvases and ornaments, the glass 3-1/4” ball ornaments," she said. "I do a lot of gear ornaments — meaning painting a helmet and coat on there — and it looks like it’s hanging on a gear rack. Then I paint on the fire department name and the last name on the coat and the number on the helmet. On the canvas, I can pretty much paint what they want. I can combine different pictures into one, whatever they’re wanting.”

In addition to having painted around 200 helmets and almost 50 different axes, DeOrnellis has made thousands of ornaments.

“They see my stuff, and then they contact me,” she said. “I’m part of a couple of different groups on Facebook that are national groups for different fire buy-sell-trade things and I post it in there. That’s how I’ve gotten to nationally selling my things.”

Different causes related to first responders have benefited from DeOrnellis’ work. She has worked with Mike Flamion’s "Hotdogs with Heroes," along with other charities.

“I painted one last year," she said, "I had Code 3 Equipment send me a brand new Cairns leather parade duty helmet and sent it back and it sold for over $400 at their event last year. I donated a helmet to BackStoppers a few years ago. I work with the Ozark Firefighters Association. I donate a lot things to them for their fundraisers. They have a helmet right now that’s painted with a background of the American flag and has a 9/11 memorial picture painted on it. They are doing a raffle right now for the Firefighter’s Fund that helps different firefighters if they’ve been hurt.”

According to DeOrnellis, she can paint most anything someone might want on the item. The process begins with asking them whether the item is for a retirement, a gift or a memorial.

“The east coast departments are big into challenge coins,” she said. “I’ve done several with the coin for that department painted on the helmet. On the back rim it will have a name or saying on it.

“I’ve done a lot of the 9/11 where they’re raising the flag up. A lot of American flags where it looks like the American fflag is draped over the helmet. It depends on what they’re wanting it for as far as what direction we’re going. They send me their photos. I did one — her husband was a soldier and a firefighter. I did one side for the soldier and one side for the firefighter.”

One of the most memorable helmets that DeOrnellis painted was for a fire department in Wilmington, Delaware, that sent her a helmet for their annual fundraiser.

“They had lost three members of their department in a fire — it made national news,” she said. “I painted a portrait of the three members that lost their lives. That one was pretty special. They auctioned it off. I have done several after that for members of that department. Their families or wives contacted me.”

DeOrnellis noted that the turnaround is about four weeks for a helmet because she works full-time and has a family. The painting process also requires the layers to dry before continuing. She estimates that it would take about 72 hours if she were to paint continuously from start to finish.

“I started doing it in honor of my husband, and it’s kind of grown, not just for him, but for the fire and first responder service in general,” she said. “My uncle, Ron Hill, has been a firefighter for 30 something years. He was a paramedic with St. Francois County Ambulance District. He was an inspiration for this. My husband’s brothers have been in the fire service and still are, most of them. I like being able to say, ‘Hey, I can do this? Let me help you,’ to different organizations.

“A long time ago, I knew I had a gift. I knew I could use it for my benefit, but I also knew I could benefit others. It’s one of these things, when you kind of feel like a tap on your shoulder, you need to do this. Sometimes it feels like a calling. Just trying to give back.”

As part of the upcoming Farmington Regional Chamber of Commerce "Doors Tour," DeOrnellis is painting a door in honor of Farmington first responders.

“I saw one painted on Facebook and thought I could do that. I wanted to do one for my husband in honor of his fire service. It took off from there.” – Miranda DeOrnellis

With increased visitation at state parks and historic sites in Missouri, it’s important for visitors to remember their role in protecting and …

Farmington artist Miranda DeOrnellis is becoming known across the nation for her beautifully decorated fire helmets. In addition to using helmets as her canvas, she also decorates fire axes and ornaments to honor firefighters for their sacrifice and courage.

An example of Miranda DeOrnellis using her artistic talents to honor firefighters with a fire axe.