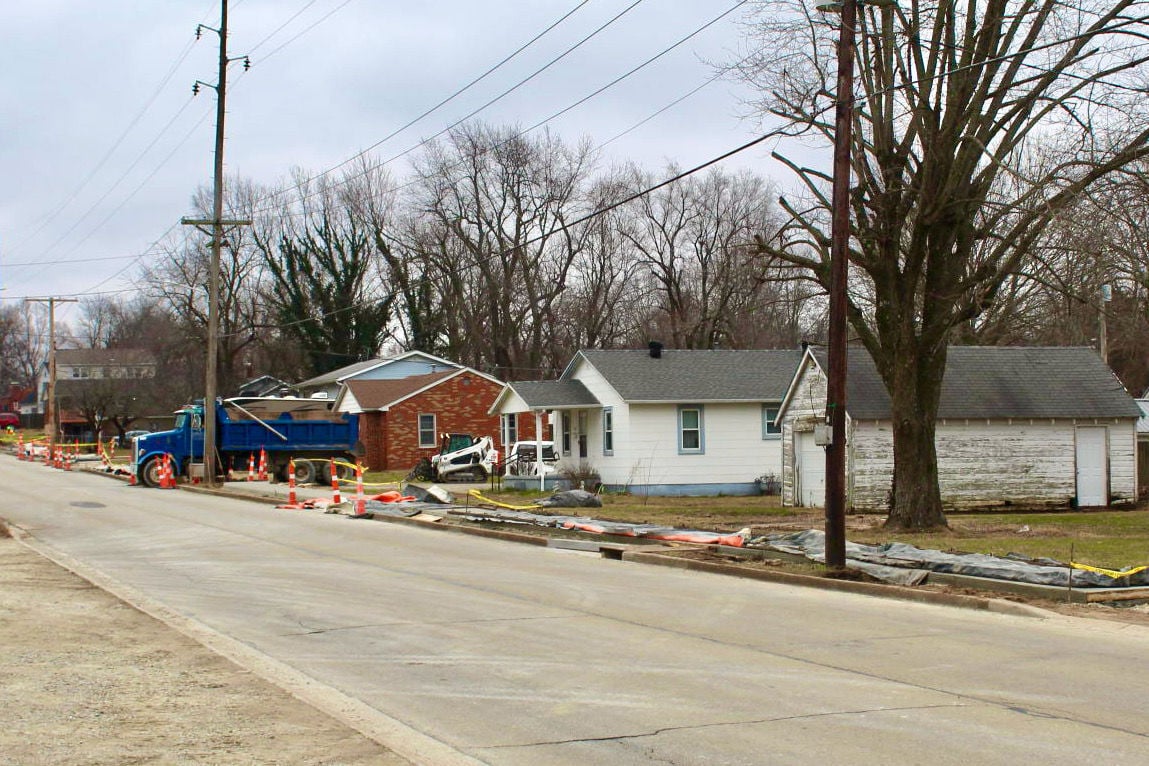 Among a number of city projects either already in progress or planned for the new year, is the installation of sidewalks along Maple Street. 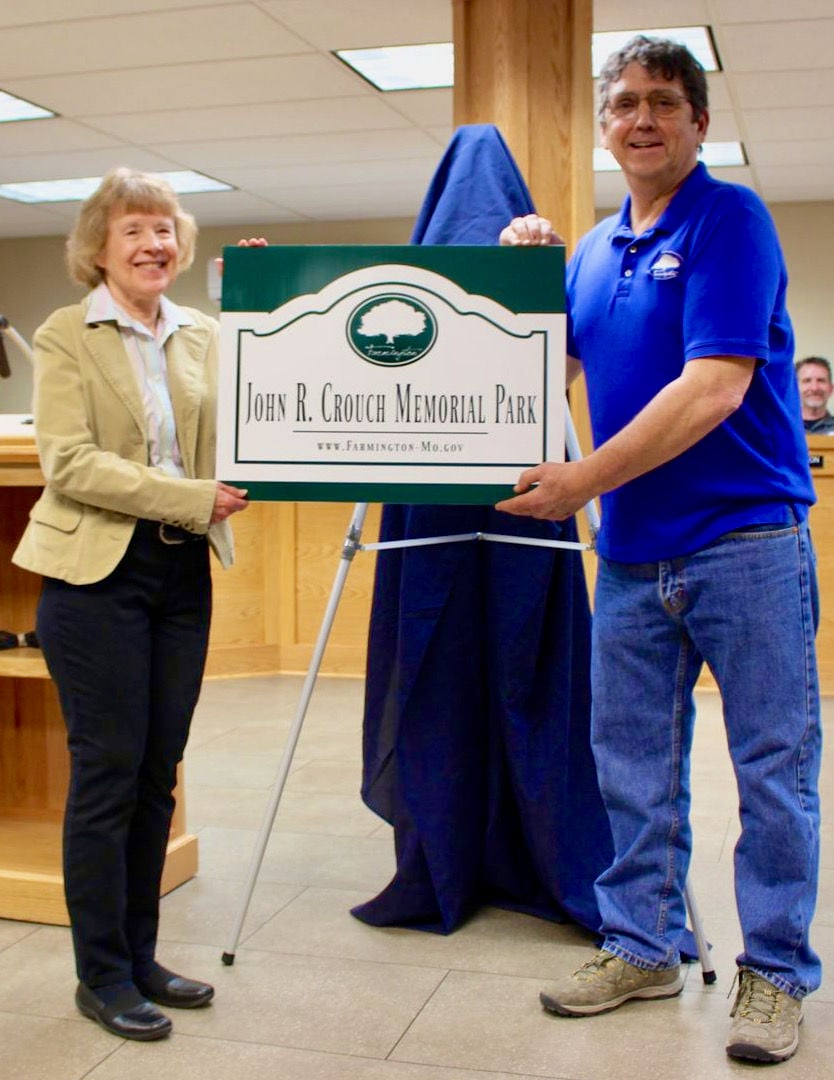 At the March 25, 2019 meeting of the Farmington City Council, Mayor Larry Forsythe and Kathy Crouch, the widow of city councilman John R. Crouch, hold a sign designating a new city park as John R. Crouch Memorial Park in honor of the businessman, alderman and city advocate who died Feb. 6, 2019, at the age of 71. Forsythe expects the official dedication of the park to take place sometime in March of this year.

With the start of a new year, Farmington Mayor Larry Forsythe spoke about projects the city will be completing, and what improvements he  the city in 2021.

“I think last year was pretty good, although it was kind of strange,” he said. “We got a lot accomplished. We are going to keep going with the sewers and the water, the infrastructure. I’m big on infrastructure. We have a couple things with the Historic District Committee, they’re wanting to change some things downtown, as far as the rules go.”

Addressing the Maple Street sidewalk project already in progress, Forsythe said, “When it is done, there will be a crosswalk at Maple Street and Potosi. We have a couple of hundred feet on Maple going east off Potosi. They came down Maple Street and just stopped it. We are going to hook that all together.”

According to Forsythe, another highpoint of 2021 will be the official dedication in March of the John R. Crouch Memorial Park on Pine Street. The park is named in honor of the Farmington businessman, city council member and longtime civic leader who died in February 2019. The park will encompass the lake and surrounding area between the Dayse Baker Learning Center and the new Pine Trails Subdivision, formerly part of the Presbyterian Children’s Farm.

Another dedication planned by the city involves a portion of Karsch Boulevard. The stretch of thoroughfare will be named after Dan Peek, the renowned songwriter, musician and author who co-founded the group "America" in the late 1960s. Peek's parents, Milton and Alma "Gerri" Peek, were longtime Farmington residents. Dan Peek and his wife Catherine moved to Farmington in 1978, soon after he left the band.

“We’ve never got that done, because COVID got us,” Forsythe said. “I really hated that his parents passed away before they could see it, but MoDOT kind of held us up on that because they are the ones making the sign. We’ll try to get the family together on that.”

Forsythe remarked that Engler Park will likely be seeing a long-awaited addition later in the year.

“In the fall of 2021, we will probably be installing the all-inclusive playground,” he said. "[Play if Forward in the Parkland] got the grants and raised the money. That’s a good deal. We are going to take the old playground apart, re-powder coat it, replace the plastic pieces — we can still buy them from Little Tykes — and move that to Veteran’s Park. Then Veteran’s Park will have more of an attraction.”

Some street modifications are also in the plans for this year. Forsythe said the city is going to extend Old Fredericktown Road out to "Hardy’s subdivision" on Ridge Haven Drive. Another project under consideration by the city is making improvements to the highly congested intersection at Karsch, Plaza Square and Weber Road.

“We don’t know how we’re going to work that out yet,” he said.

Another planned project is completion of the Tower Drive electrical substation to handle the increase in construction now underway in the northeast section of Farmington. Upgrading the electrical circuits on Overall Road is also in the works.

Forsythe noted that the Farmington Fire Department will be receiving its new aerial truck in June. It will replace the department's 1998 unit still in operation.

“I’m thinking about having them raise me up in the bucket," he said. "We’ll see about that."

“I think last year was pretty good, although it was kind of strange. We got a lot accomplished." – Mayor Larry Forsythe

Three dogs and four cats at the Farmington Pound are seeking their owners or new homes where they can be loved and cared for.

Country Days is less than a month away

In less than a month from today, Farmington Country Days will be returning to the downtown area after skipping a year due to the COVID-19 pandemic.

This interesting collection of various sized plastic disks and oblong guides became quite popular for a period of time back in the 1960s. Do y…

When Marty Scott was younger, he discovered his older sister’s Beatles’ records, took them and never gave them back to her. Little did he real…

Everyone experiences changes in their lives at one time or another, but there’s a big change coming to the L.I.F.E. Center for Independent Liv…

The Farmington R-7 School District will be holding several immunization clinics in May for students who need to get caught up on their vaccinations.

This week's Take a Guess is a special compartment that used to be found in many homes. Do you know what it was used for? If you think you do, …

Among a number of city projects either already in progress or planned for the new year, is the installation of sidewalks along Maple Street.

At the March 25, 2019 meeting of the Farmington City Council, Mayor Larry Forsythe and Kathy Crouch, the widow of city councilman John R. Crouch, hold a sign designating a new city park as John R. Crouch Memorial Park in honor of the businessman, alderman and city advocate who died Feb. 6, 2019, at the age of 71. Forsythe expects the official dedication of the park to take place sometime in March of this year.