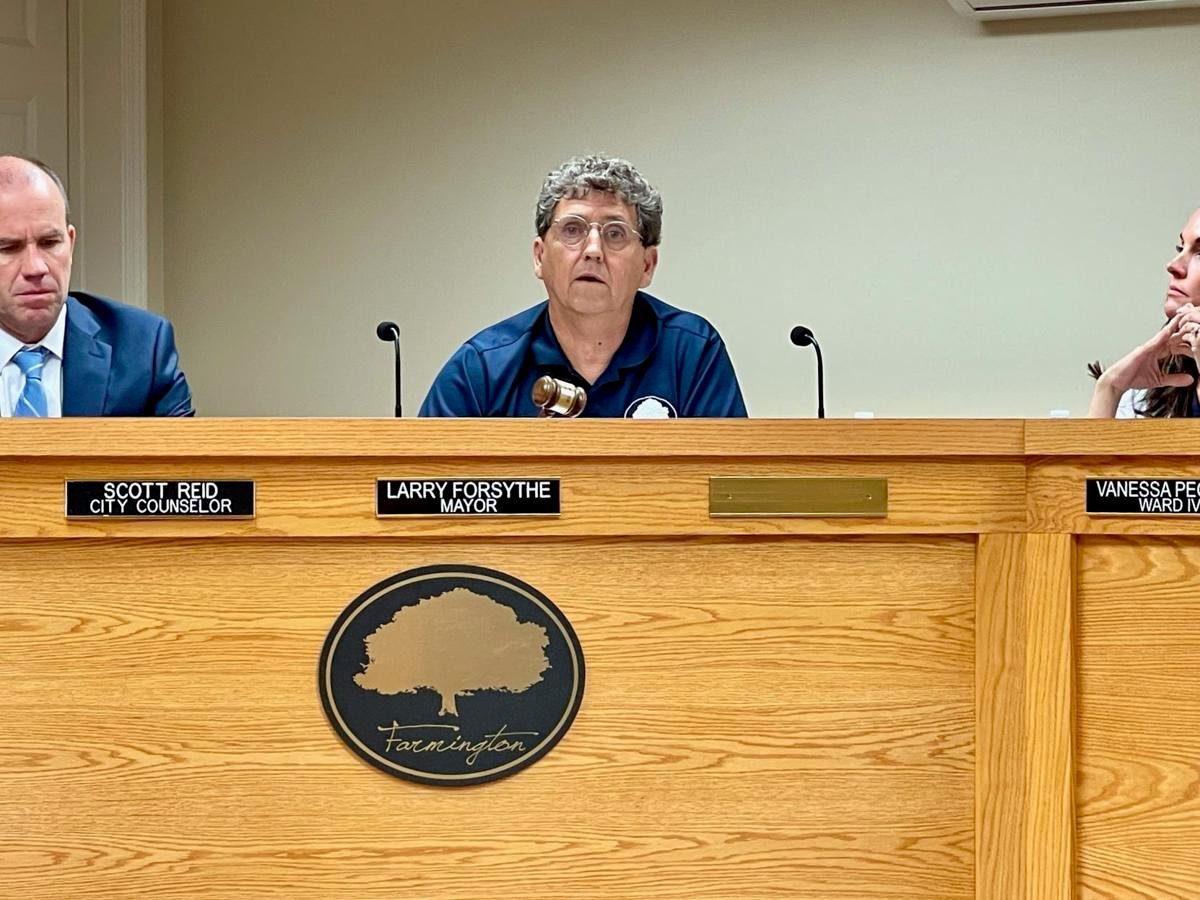 Farmington Mayor Larry Forsythe discusses a complaint he received from a city resident regarding waste disposal services provided by Waste Management, the company that took over after Freedom Waste closed its doors. 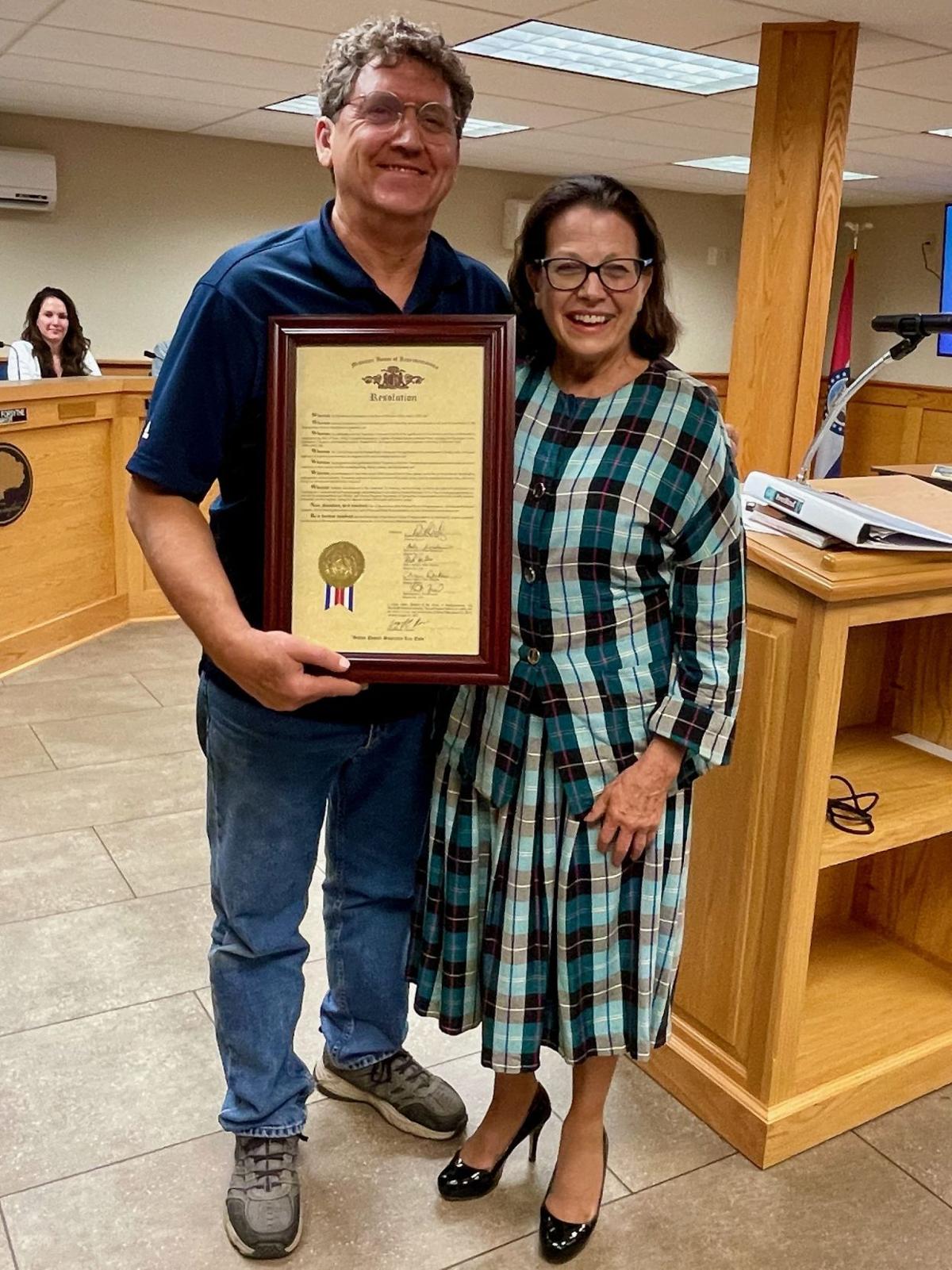 Farmington Mayor Larry Forsythe and Nancy Cozean, of the Highways of History Planning Committee, are pictured with a resolution from the Missouri House of Representatives regarding the city's historical connection to the Trail of Tears and Plank Road. 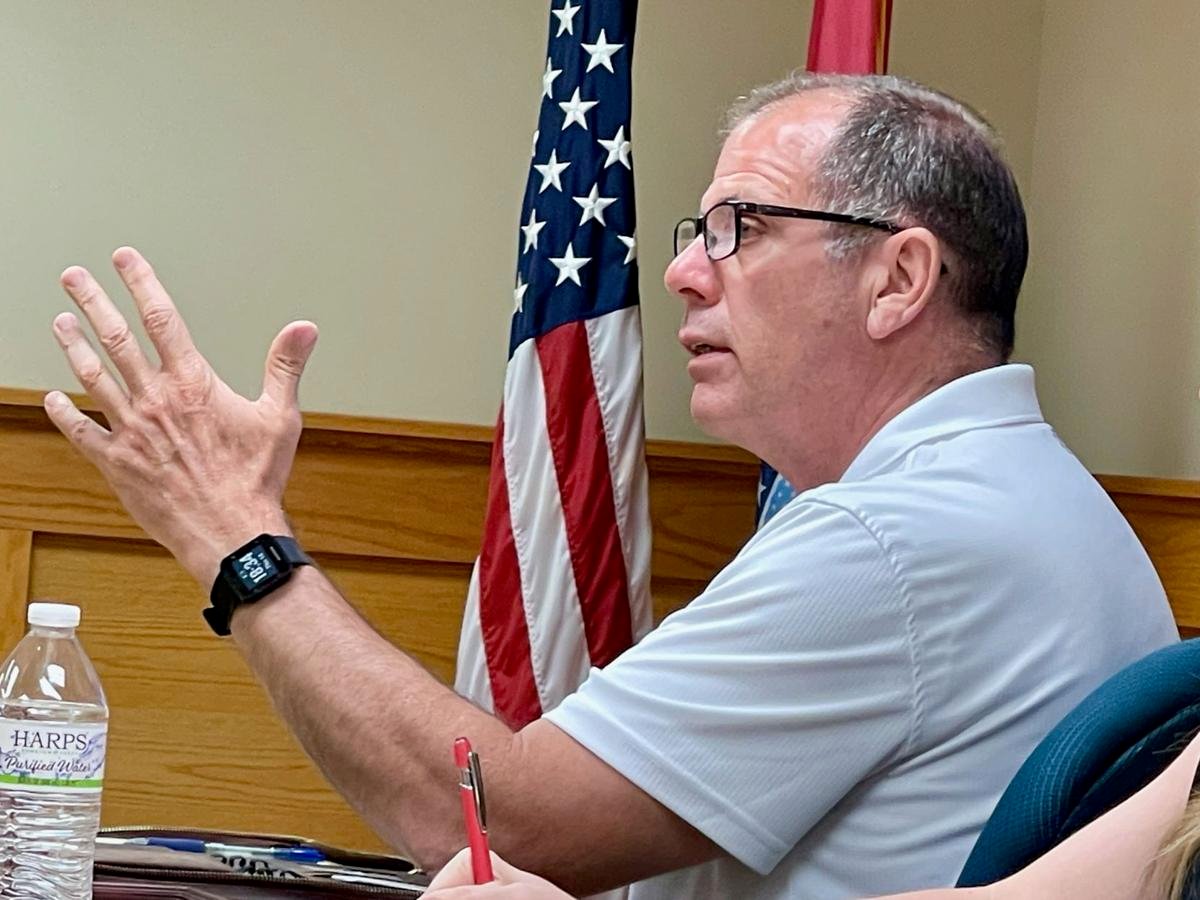 Addressing the council, Forsythe said, “I had a call tonight and I think we need to look at this. Freedom Waste was bought out by Waste Management a couple of months ago. It’s been a headache for the people that are Freedom Waste customers because I guess that Waste Management didn’t have all their ducks in a row, so they’re getting behind and they’re not picking up what they’re supposed to pick up. The customer asked me tonight if Waste Management had to have a commercial license in the city of Farmington. I do believe they have to.”

Forsythe continued his discussion about the phone conversation.

“He went to the point of saying he’s called the vice president of Waste Management in Houston, Texas, or wherever they are. This gentleman really surprised me when he said, ‘If they don’t do what you say, why don’t you pull their license?’ I said, ‘Well, it’s a little bit harder than that.’ But we need to look at this because the trash is sitting, and it’s not being picked up on the days it’s normally picked up.”

Responding to the mayor, Beavers said, “According to our ordinances, we require residents to provide for trash removal service. So, if they’re not having their trash removed, it’s on the property owner to handle. It’s not the city’s responsibility to handle customer service.”

Beavers then discussed the city’s ability to revoke a business license.

“There is a vested property right in a business license,” he said. “So, we can’t just revoke a business license because someone is giving poor customer service. If you wanted to go that route, you would need to have grounds for it. You would need to have a hearing before the council and there would be all kinds of due process things. I think it will probably sort out in time.”

Forsythe said, “I think it will.”

Ward 4 Councilman Vanessa Pegram interjected, “I’m a customer that was transferred and I’m being optimistic that they’ll get it figured out in time.”

Noting that Waste Management is a national company, Beavers repeated his expectation that any problems would be sorted out in time. He then asked the mayor to give him the customer’s name following the meeting and said he would call Waste Management on his behalf.

In his report to the council, Beavers said the Missouri Joint Municipal Electric Utility Commission, of which the city is a member, had approved an application a $50 million interest-free loan pool to help cover the $2.4 million in excess energy charges the city was carrying on a line of credit from the cold spell that hit the nation in February. If the loan is approved, it is expected to save the city around $100,000 in interest.

Beavers told the council that the city was going to begin spraying for mosquitos on Monday, June 14. There are three routes that will be sprayed every other week starting around dusk when the mosquitos are out. Spraying may also take place in the mornings before sunrise.

Beavers noted that spraying will not take place if it’s raining or too windy. The chemical used is Kontrol 4-4. According to the company, it is a “low-odor oil formulation ready to use and ideally suited for most areas over specific crops, including alfalfa and range grasses.

“As a non-corrosive, it won’t damage cars, trucks or airplanes. Its broad spectrum, superior formulation is clean and clear and provides quick knockdown of most mosquito species as well as other Diptera species such as biting and non-biting midges, black flies and gnats.”

Earlier in the meeting, Nancy Cozean of the Highways of History Planning Committee appeared before the council to report that the previous day’s “Trail of Tears” had gone well and presented a resolution the committee had received from the Missouri House of Representatives regarding the trail and Plank Road.

The document recognized the endorsement by the city council “of the significance of two historic trails that crossed paths in Farmington; the Trail of Tears, 1830s, a required migration by Congress of certain Eastern American Tribes including the Cherokees, Creeks, Chickasaws, Choctaws, and Seminoles; and the Planked Road, the longest planked wooden highway in the State of Missouri in the 1950s-1860s.”

Committee reports were heard from the various committees and a request from Public Safety that the position of police sergeant recently vacated by LeRoy Beard be filled by Michael McCarthy was unanimously approved.

An ordinance to vacate a portion of a utility easement at 818 St. Albans Drive was approved. There were also first readings of an ordinance regarding the approving and acceptance of a final report plat at 327, 319 and 298 Wellington Place; and an ordinance changing the classification of the zone district for certain parcels at 607 Maple St.

A report on Country Days was given to the council by Farmington Regional Chamber of Commerce Executive Director Candy Hente.

An old maxim attributed to Napoleon Bonaparte is the quote “An army marches on its stomach.”

During a July 22 press conference at the State Capitol, Governor Mike Parson announced the launch of a statewide COVID-19 vaccination incentiv…

It was 18 years ago when the event first began. It’s now grown from a one-third-full theater event to the mega-monster sold-out performances a…

This week's Take a Guess is a really odd and obscure item. It is a real product you can purchase and it has a specific purpose. It's possible …

A rise in speeding and other reckless driving behaviors continues to be a disturbing trend in 2021. During the first half of the year, more th…

The following materials were added to the Farmington Public Library during the month of July 2021.

This week's item is an odd looking tool that has a specific name and purpose. Do you know what it's called and what it's used for? If you thin…

Parkland Health Center has announced that Nat Rousan was selected as the Our BJC Values Employee for the month of June 2021.

Farmington Mayor Larry Forsythe discusses a complaint he received from a city resident regarding waste disposal services provided by Waste Management, the company that took over after Freedom Waste closed its doors.

Farmington Mayor Larry Forsythe and Nancy Cozean, of the Highways of History Planning Committee, are pictured with a resolution from the Missouri House of Representatives regarding the city's historical connection to the Trail of Tears and Plank Road.