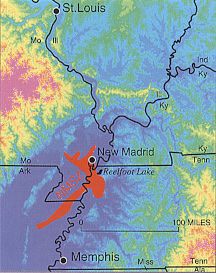 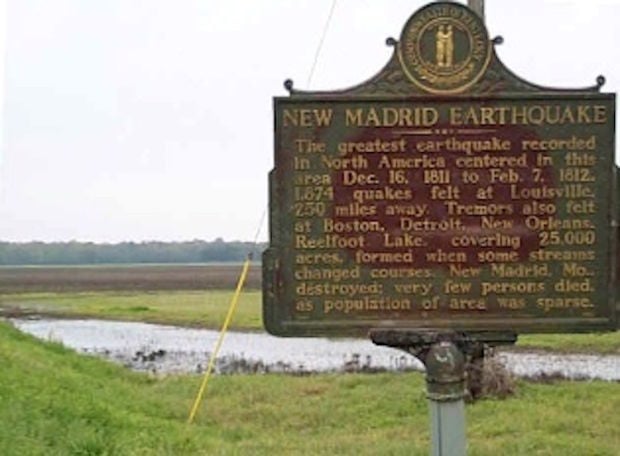 Two-hundred-and-eight years after the region was hit hard by a powerful series of earthquakes, experts disagree on how much risk people living in the area today face in experiencing another devastating event.

Two-hundred-and-eight years ago Friday, southeast Missouri experienced the third and final main shock from what turned out to be the most powerful series of earthquakes in the history of the United States.

The first, a 7.7 magnitude quake, took place around 2:15 a.m. in northeast Arkansas on Dec. 16, 1811. The second principal shock measuring slightly less than the first earthquake at 7.5 magnitude occurred in Missouri on Jan. 23, 1812, and the third a 7.7 magnitude like the first on Feb. 7, 1812, along the Reelfoot fault in Missouri and Tennessee.

The following is a breakdown of each of the four major quakes, their effects and aftereffects:

This powerful earthquake was felt widely over the entire eastern United States. People were awakened by the shaking in New York City, Washington, D.C., and Charleston, S.C. Perceptible ground shaking was in the range of one to three minutes depending upon the observer’s location. The ground motions were described as “most alarming and frightening” in places like Nashville, Tenn., and Louisville, Ky. Reports also describe houses and other structures being severely shaken, with many chimneys knocked down. In the epicentral area the ground surface was described as being in great convulsion, with sand and water ejected tens of feet into the air — a process called liquefaction.

A large event felt on the East Coast that is sometimes regarded as the fourth principal earthquake of the 1811-1812 sequence. The event was described as “severe” at New Bourbon, Mo. Boatman John Bradbury, who was moored to a small island south of New Madrid, said the aftershock was as “terrible, but not equal to the first.” It’s believed the large aftershock occurred around dawn in the New Madrid region, near the surface projection of the Reelfoot fault.

It is difficult to assign intensities to the principal shocks that occurred after 1811, because many of the published accounts describe the cumulative effects of all the earthquakes. Also, because the Ohio River was iced over, there was little river traffic and fewer human observers. Using the Dec. 16 earthquake as a standard; however, there is a general consensus that this earthquake was the smallest of the three main shocks. The meizoseismal area was characterized by general ground warping, ejections, fissuring, severe landslides and caving of stream banks.

Several destructive shocks occurred on Feb. 7, the last of which equaled or surpassed the magnitude of any of the previous quakes. It totally destroyed the town of New Madrid. At St. Louis, many houses were damaged severely and their chimneys thrown down. The meizoseismal area was characterized by general ground warping, ejections, fissuring, severe landslides and caving of stream banks.

So, how likely is this region to have a repeat of the New Madrid quakes? Some experts say that, after the passing of more than 200 years, southeast Missouri is overdue for another hit and that it could be devastating — particularly to the city of Memphis, Tennessee. But then there is Seth Stein, a seismologist at Northwestern University and author of the book, “Disaster Deferred: How New Science is Changing Our View of Earthquake Hazards in the Midwest.”

Stein says that GPS studies of ground movements in the region suggest that the current hazard for another major earthquake is quite low. This has put him in direct opposition to those who caution that people living in the New Madrid region should prepare for future hazards. Citing the potential dangers of future earthquakes, government agencies — including the Federal Emergency Management Agency (FEMA) and the U.S. Geological Survey (USGS) — have urged the region to adopt stricter building codes. Stein disagrees, saying regulations like these would cost communities billions and be unnecessary, as well. He believes New Madrid’s Reelfoot Fault is dying.

"It’s unlikely to do anything on a timescale of thousands of years," he said. "The history of these kinds of faults is that they are active for a few thousand years, then dormant, then active again."

To help inform Missourians and promote earthquake preparedness, Missouri observes Earthquake Awareness Month each February, emphasizing the real possibility of another major earthquake in the NMSZ. While no one can predict exactly when an earthquake will occur, scientists agree that a large NMSZ earthquake is a significant risk.

“If Missouri experienced a progression of intense earthquakes today like it did back in the 19th century, it would create widespread destruction and disrupt the lives of millions of people,” State Emergency Management Agency Acting Director Jim Remillard said. “Earthquake Awareness Month stresses the importance of advance planning and exercises to prepare for such a catastrophic disaster.”

When shaking starts, “Drop, Cover and Hold On.” Drop to your knees, cover your head and get under a desk or table, and hold on until the shaking stops. Studies show that in developed countries with modern structures, falling debris is the most common source of injuries.

Being prepared before an earthquake is also a key component to staying safe. Here are a few simple steps:

— Have an emergency kit. Include a flashlight, first aid kit, radio, drinking water and blankets. A major earthquake could take out utilities for weeks.

— Develop a family communication plan. Identify a relative living at least 100 miles away; everyone can call to "check in" to tell family you're safe.

— Know how to turn off your gas and water.

— Find out if your house is covered for earthquake damage. Most homeowner insurance does not include earthquake coverage; it must be purchased separately.

In response to the nutritional needs of low-income Missourians during the COVID-19 pandemic, the Department of Social Services Family Support …

Local business owner won't let a fire get him down

Ron’s Tire on Karsch Blvd in Farmington has had its share of ups and downs since 1982, including a major fire last week.

View from the family tree

Recognizing that every school district is different, Gov. Mike Parson enabled local school leaders to make the best decisions for their commun…

Recognizing that every school district is different, Gov. Mike Parson enabled local school leaders to make the best decisions for their commun…

With last week’s spring break and the continuing shutdown of the legislature, State Representative Dale Wright, R-Farmington, has been busy co…

This week's Take a Guess is a strange looking gadget, but when you need it, you'll be glad it's around. Any idea what it is? Give us a call at…

Kennedy Breakfield of Farmington has been named to the St. Louis College of Pharmacy (SLCP) dean’s list for the fall 2019 semester.

Students of the junior high school put emphasis on the patriotic them Tuesday of this week. Merritt Beck of the Bismarck Junior High who atten…

Two-hundred-and-eight years after the region was hit hard by a powerful series of earthquakes, experts disagree on how much risk people living in the area today face in experiencing another devastating event.