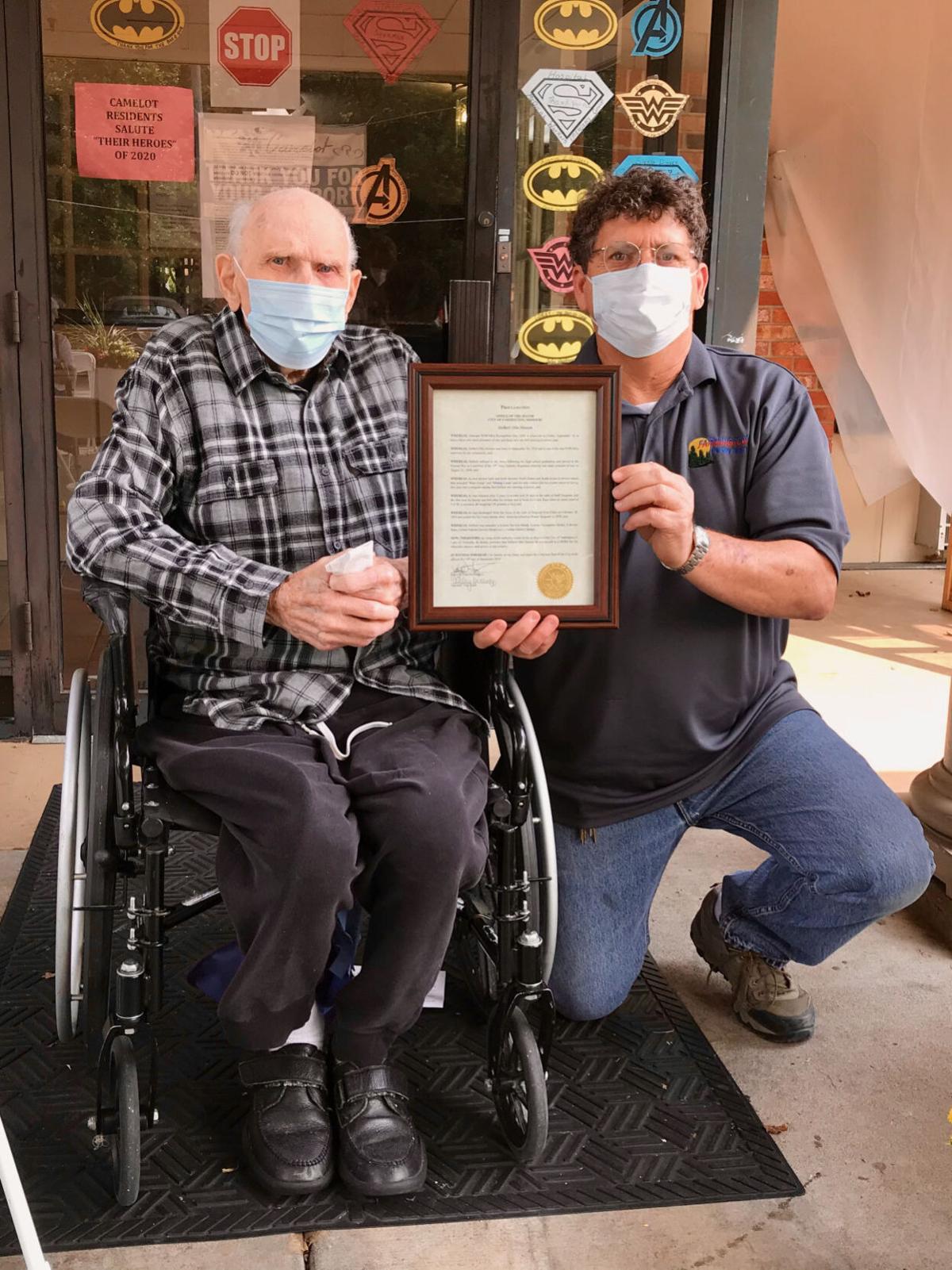 Former POW Delbert Olin Henson is presented a proclamation from Farmington Mayor Larry Forsythe declaring that he "be recognized as a hero for his admirable bravery ans service to our country." The ceremony was held Sept. 18 at Camelot Skilled Nursing on National POW/MIA Recognition Day. 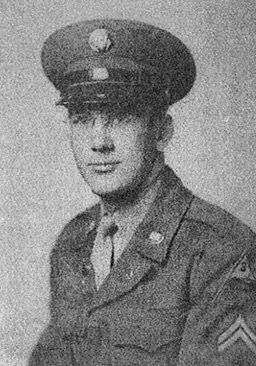 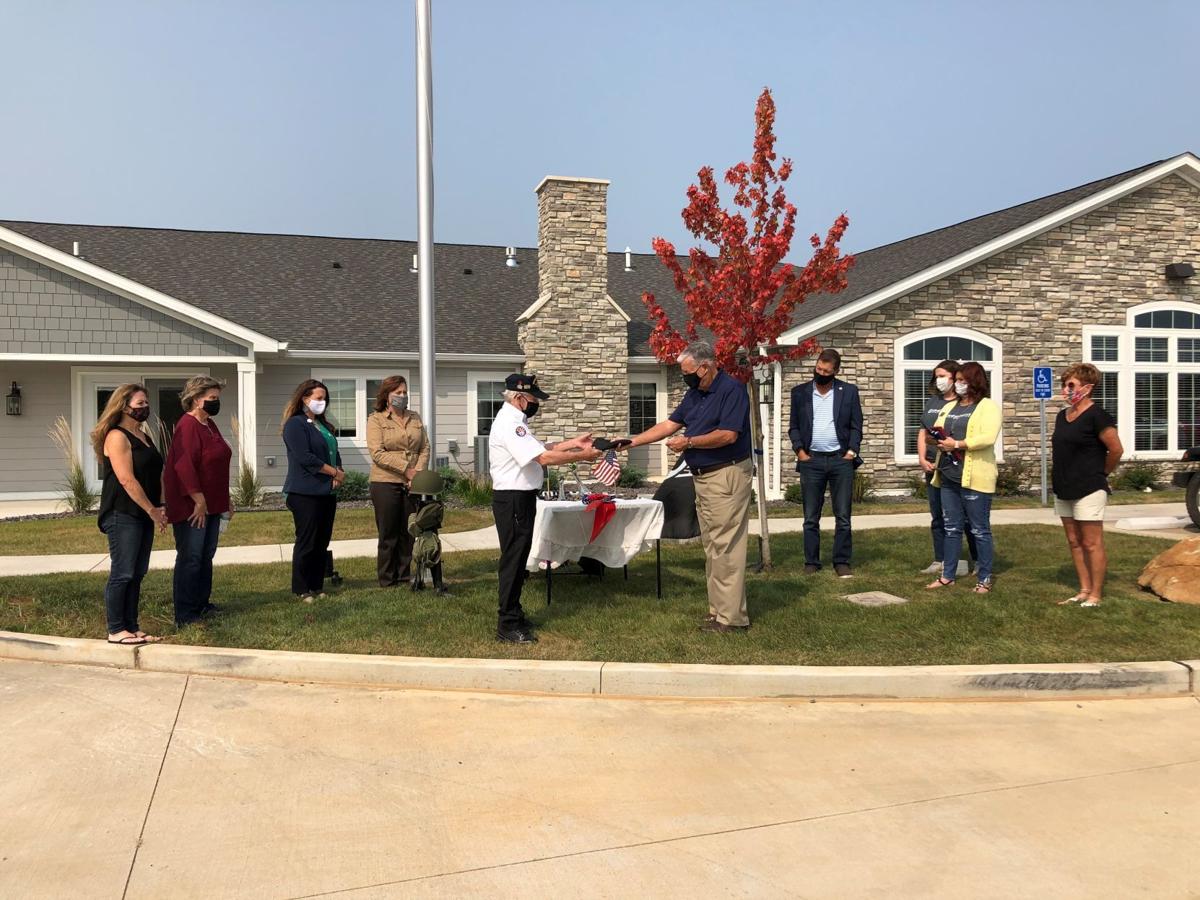 On the third Friday in September each year, the nation honors Americans who were prisoners of war, as well as those who are missing in action. On that day — designated by Congress as National POW/MIA Recognition Day — these men and women are recognized for the courage and the determination they displayed in the face of unspeakable hardships and sacrifice.

Former POW Delbert Olin Henson, a resident at Camelot Skilled Nursing in Farmington, was recognized for his sacrifice in a ceremony held on the morning of Sept. 18 at the center. As a member of the 19th Army Infantry Regiment, he was always the first to volunteer himself and his squad when patrols were needed.

Henson was held prisoner of war during the Korean Conflict from August 1950 to February 1953. Henson was captured near Chiangsong, North Korea. While in prison camp, he was moved back and forth from North Korea to South Korea.

The first time Henson's family saw him after his release was at Scott Air Force Base. They were reportedly very shocked at the sight of a whole ward of returned POWs all weighing 100 pounds or less.

Henson was honorably discharged from the Army in February 1954 with the rank of E-7. He joined the Air Force shortly thereafter, retiring as a master sergeant in 1970. His decorations include the Korean Service Medal and Korean Occupation Medal; four Bronze Star Service Medals; and a Combat Infantry Badge.

In the second recognition held Friday, the Desloge and Farmington Chambers of Commerce joined Jennifer Davis, director of Cedarhurst Senior Living of Farmington, in a combined flag dedication ceremony at its Farmington campus.

Kathy Wigger opened the ceremony with the singing of the National Anthem followed by a recitation by the crowd of the Pledge of Allegiance.

State Rep. Mike Henderson next presented Davis with American and Missouri flags that had been flown over the Missouri State Capitol in Jefferson City.

About 90 percent of the 1,741 people still missing were lost in Vietnam or areas of Laos and Cambodia under Vietnam's wartime control, according to the National League of Families website — cited in the United States Army website.

Dedication ceremonies for the new St. Joseph School building were held here Sunday afternoon with a large crowd of local parishioners and visi…

When Gov. Mike Parson signed a proclamation this summer, Missouri and 42 other states committed to support the President’s Roadmap to Empower …

A homeless man allegedly set fires in front of two businesses in Farmington on Monday night.

This story originally appeared in the Thursday, Oct. 9, 1980 issue of The Farmington Press. – Editor

Former POW Delbert Olin Henson is presented a proclamation from Farmington Mayor Larry Forsythe declaring that he "be recognized as a hero for his admirable bravery ans service to our country." The ceremony was held Sept. 18 at Camelot Skilled Nursing on National POW/MIA Recognition Day.