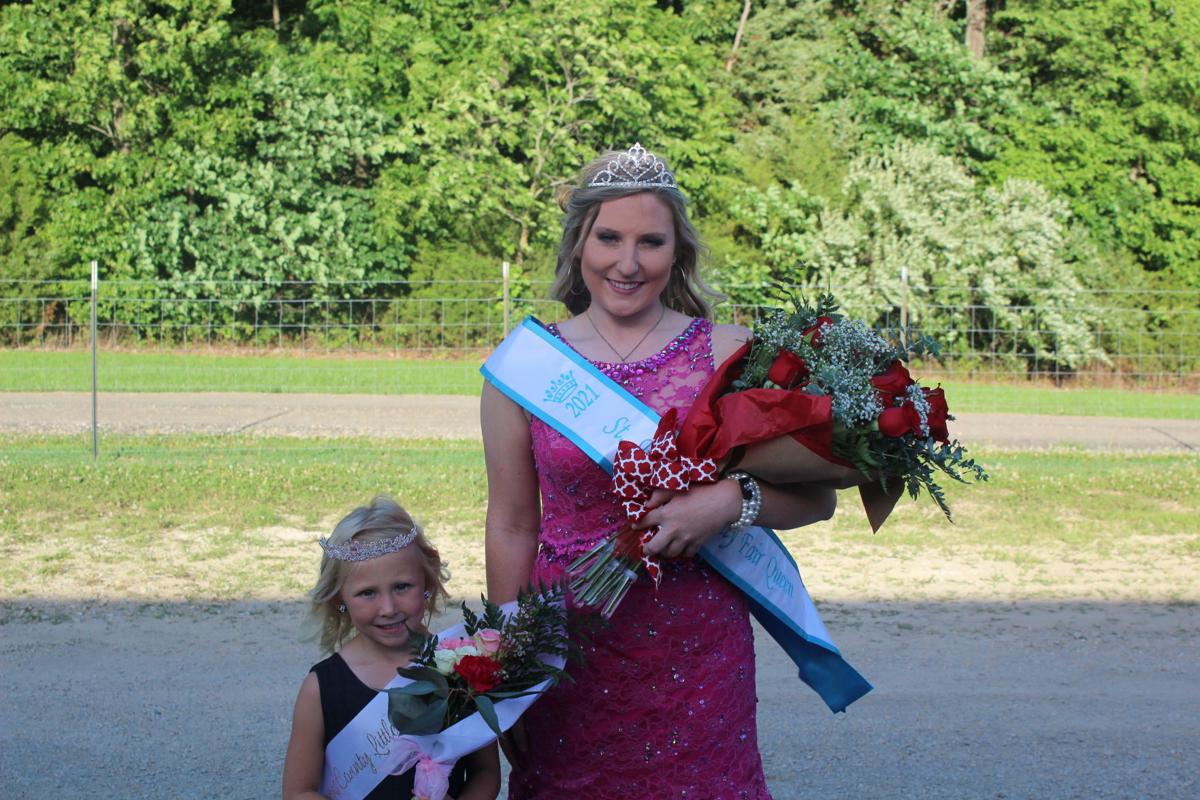 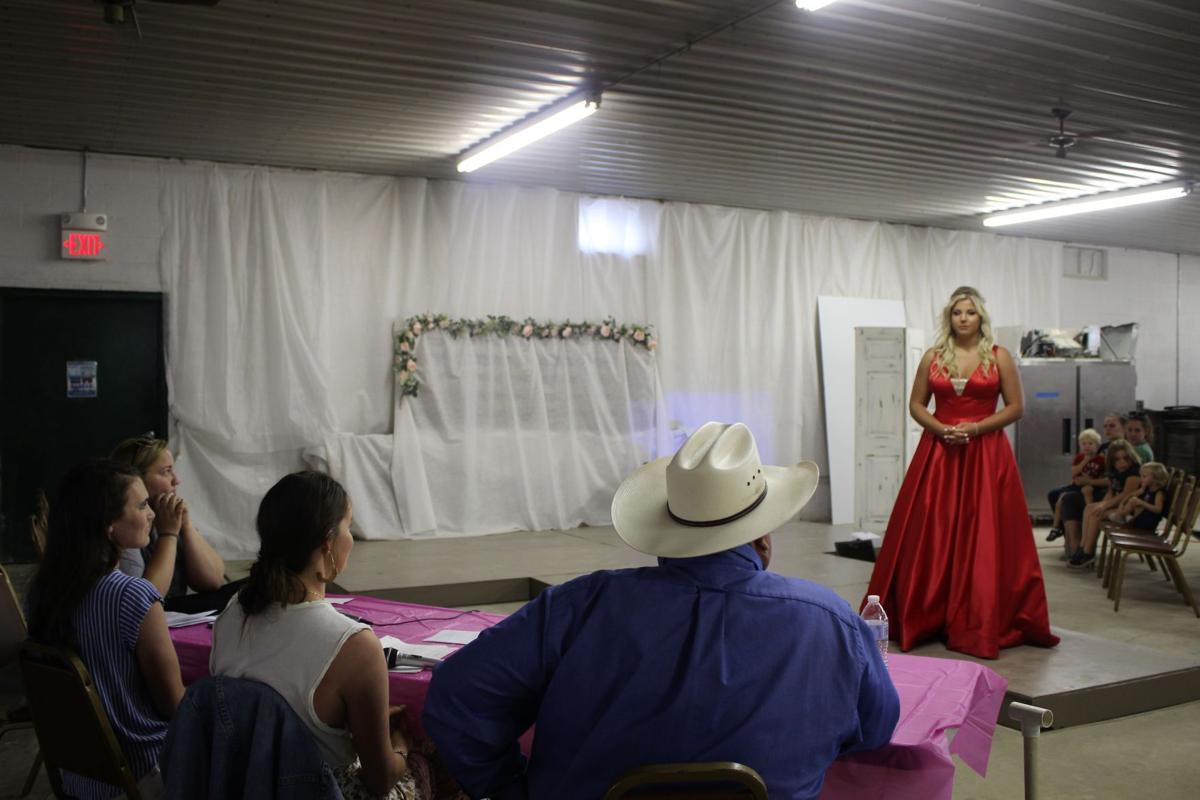 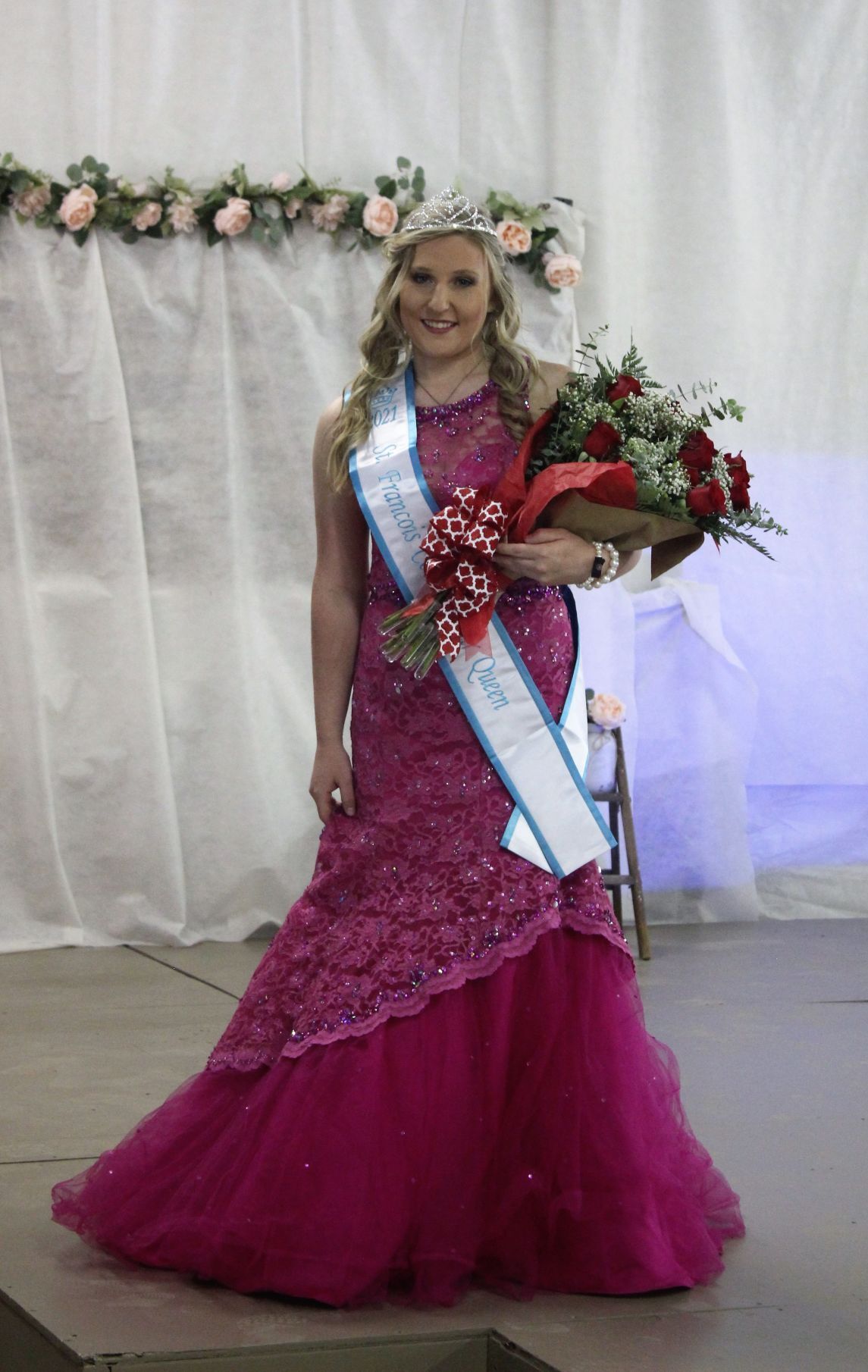 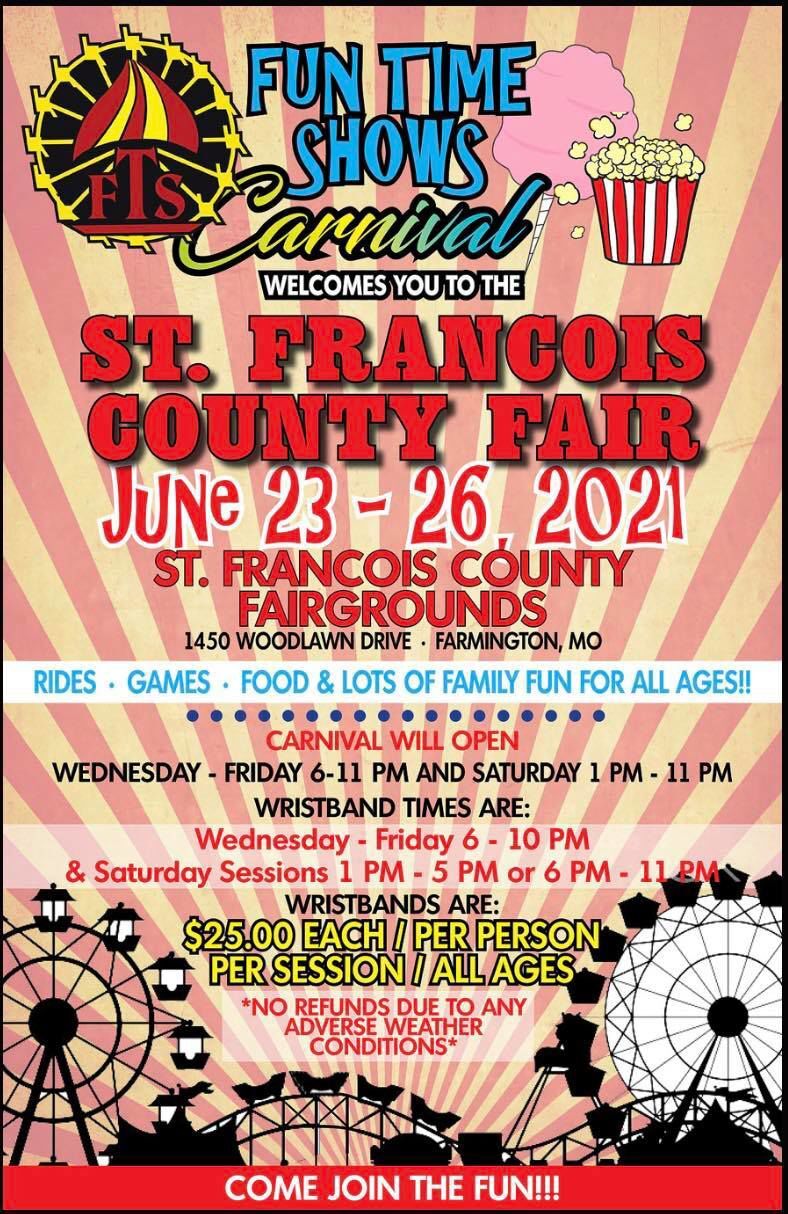 UPDATE: Organizers announced Wednesday morning that "With huge regret we must announce that our Carnival has just informed us that they cannot fulfill their contract due to shortage of trained operators. The Carnival was an added feature to our entertainment lineup. However, we still have GREAT events like the Laine Hardy concert, Johnathan Braddy Band, XCaliber Tractor Pulling, Auto Plaza Group Empire Classic Sprint Car Race and Good Old Boys Truck Pulls, Horse Events, and more will continue as planned. Hope to see you all at the fair!!"

ORIGINAL STORY: On Monday night, Jordan Carrow fulfilled one of her dreams.

Carrow, 20, was crowned the 2021 St. Francois County Fair Queen at the fairgrounds.

“It's amazing,” she said after her victory. “I have been out here for 16 years and I've always wanted to become the fair queen. So this feeling is one that I've never had before.”

2019 Fair Queen Hailey Gravatt was on hand to crown Carrow as the new queen.

Judges for the event were Jim Reed, Maggie Kehoe, and Courtney Herbst.

In the talent portion of the competition, Carrow gave a speech on why parents should consider getting their kids involved in 4H. She also showed a slideshow of photos from her 16 years with the organization.

For the interview portion, the contestants donned their formal gowns and answered four questions from the judges, including the importance of agriculture in their lives and in society, the importance of the county fair, why they are best candidate for queen, and how they would encourage involvement in 4H and FFA if they are crowned.

“I plan to try to attend every event out here and get around to the local schools and let them know that 4H and FFA aren’t just for farmers,” Carrow said after her victory. “It's for everyone.”

She is studying agriculture at Mineral Area College, although that program was eliminated at the end of school year. As of now, she said she can either finish up at MAC by taking classes that kind of relate or transfer to Missouri State or Southeast Missouri State.

According to her bio, she enjoys showing livestock, camping, fishing and guiding the youth around her.

Pigg is a student at Central High School and is looking to pursue a career in nursing. Her bio said she is a cheerleader, church member, and 4H member. She also enjoys spending time with her friends and family.

North County student Anna Moore was announced as a candidate but did not compete on Monday.

After last year’s cancellation, event organizer Natalie Long was glad to have it again.

“Despite COVID, it was really nice to be able to get back together and do this,” she said. “I was once the St. Francois County Fair Queen, so it is important to me. I think that it provides a whole other perspective for the girls during the fair, because you get to experience everything that you didn't necessarily get to (before). So being the fair queen gives that opportunity.”

Bristol was the only Little Miss contestant. She is in pre-K and wants to be a veterinarian. She answered questions from the judges about her best friend and her pets.

Admission to the fair is free on Wednesday.

The Super Farmer Contest, which is for kids ages 8-18, is also on Wednesday at 5:30 p.m. They will compete in events like hula hoop the cow and jump the fence. Registration begins at 5 p.m. After the farmer contest, there will be kids games, including a frozen T-shirt contest, a nickel scramble, and a watermelon eating contest.

The livestock all come in on Wednesday and the judging starts on Thursday.

The project shows for rabbits, chickens, sheep, goats, and swine will be at 3 p.m.

The day starts will the cattle show at 8 a.m. and the 4H dog show after.

Friday night is a busy night with a couple of events and concerts.

At 7 p.m., there will be a Cowboy Mounted Shooting event with the Missouri Big Irons. At the same time is an XCaliber pulling event.

“I’m pretty excited about that,” Davis added. “We haven't had a concert in almost two years. So glad to have somebody come and be able to put on a good show for us.”

The local Johnathan Braddy Band will open for Hardy at 7 p.m.

Antique tractors will be on display at 10 a.m. and there will be a cornhole tournament at noon.

The sale of the champion livestock will be at 3 p.m.

The main event on Saturday night is the Auto Plaza Group Empire Classic with winged sprints, micro sprints, and mod lites on the race track.

More information can be found at https://www.sfcfairgrounds.com/ or on their Facebook page.

On Monday night at the fairgrounds, Jordan Carrow was crowned the 2021 St. Francois County Fair Queen and Madi Pigg was named runner-up. Brist…

Disney projects an $8 billion increase in its 2022 content budget

Disney projects an $8 billion increase in its 2022 content budget 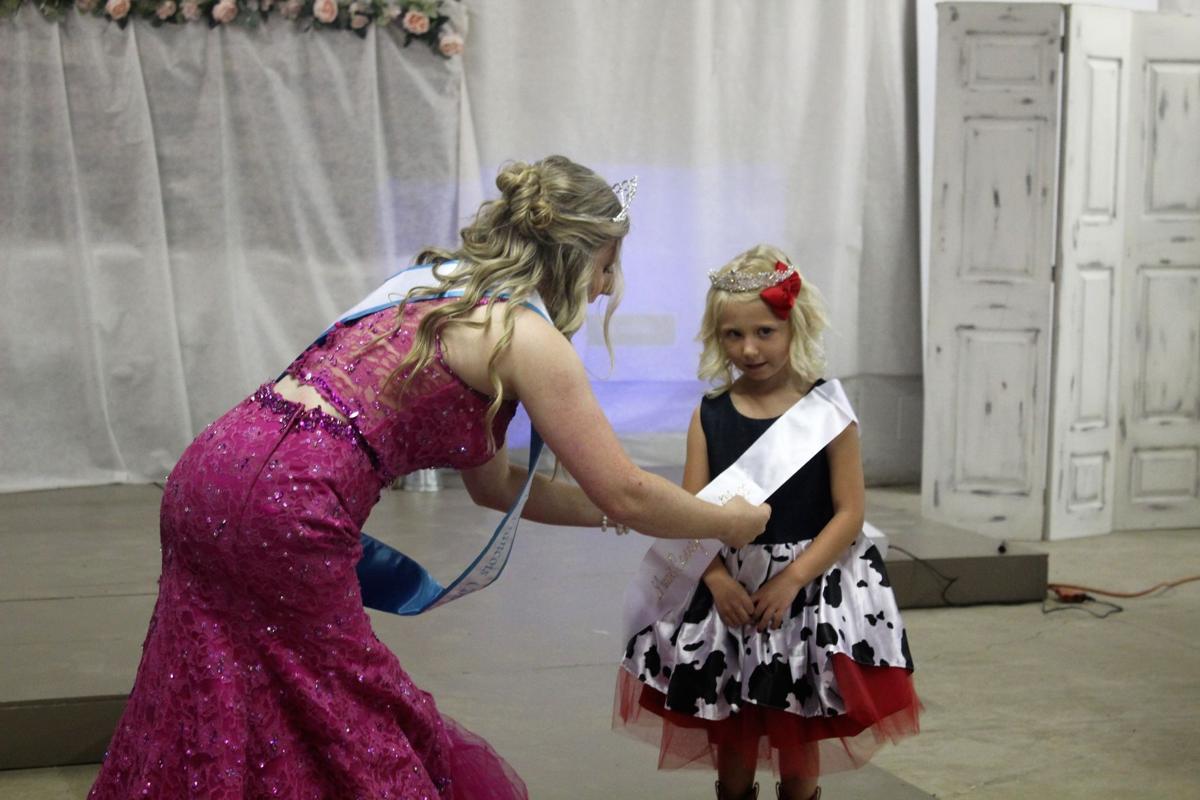 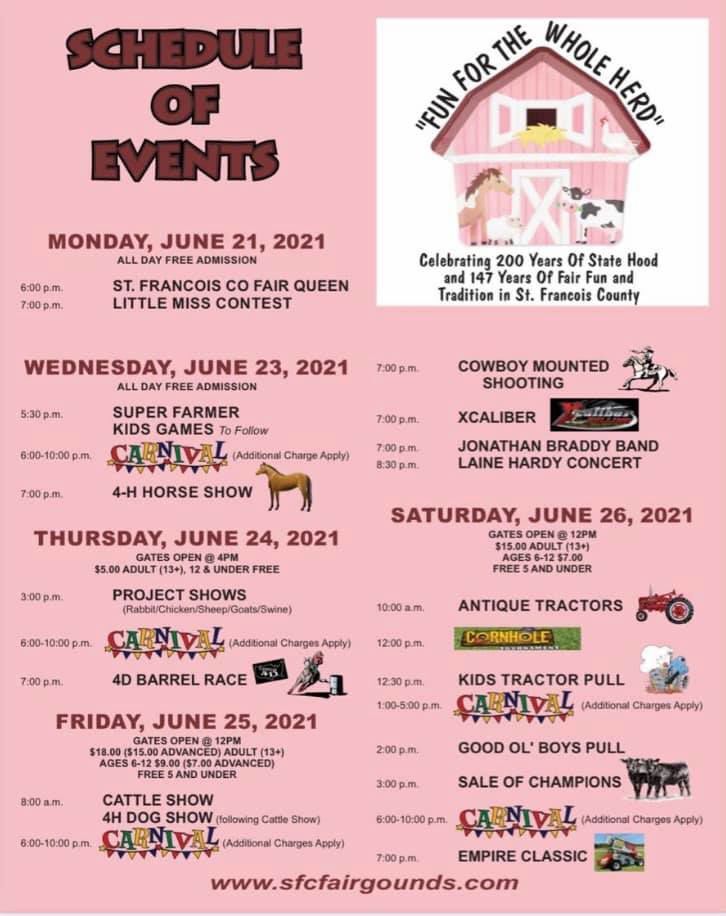