Community members can enjoy bluegrass, country, folk, and gospel music, starting on Friday at 6 p.m. and continuing Saturday from 9:30 a.m. to 7:30 p.m., at the gazebo on the lawn of the Iron County Courthouse.

As always, the music festival will be paired with the Arcadia Valley Fall Festival Parade, which starts at 10 a.m. on Tilden Street in Pilot Knob and ends at the senior center in Arcadia. The parade will pass through the festival area in downtown Ironton at about 10:30 a.m.

This is the 95th year for the parade and the theme will be retro video games. Elaborate floats are made by each class at Arcadia Valley High School to escort their respective Homecoming Queen candidate.

“It's a wonderful parade,” said Carol Kelsheimer, one of the organizers of the music festival. “They do a wonderful job with these floats.”

Attendants are Parker Goodwin and Kinley Wadlow with Hopper; Annie Yates and Sam Garcia with Pursley; Ryder Strange and Kate Jackson with Lara; and Brody Mitkos and Hatty Pogue with Paisley.

The retiring queen is Taylor Lorenz. Her attendants are Nash Wilson and Amelia Buckman.

The coronation will be on Saturday night at the high school.

“It's a good weekend because a lot of our alumni come home with it being the school fall festival,” Kelsheimer said.

The free music festival kicks off on Friday night with pickers at the gazebo and around the courthouse at 6 p.m. Then there will be a street dance with Quinton Vance and Acoustic Amigos at 8 p.m.

At 11 a.m. will be the fiddle contest with George Portz and the Friends of Bluegrass. Entry to the contest is free.

“We have people come from all over to play the fiddle and then they are judged according to their ages,” she added.

After playing three tunes, the top five fiddlers in the open contest (ages 18 and over) and the junior contest (17 and under) are awarded a cash prize and a trophy.

The festival will conclude with another street dance at 7:30 p.m., this time with Don Joy and Melanie Lynn and the Red Light Band.

Kelsheimer said there will be 40 to 50 food and craft vendors, plus a bounce house, face painting, and other kids activities.

“We have a lot of people that just bring their lawn chairs and they just sit down for the day to enjoy the different bands,” she said. “And the kids normally get to run and do what they want to do. So it's good for everybody.”

Descriptions of each of the bands from the festival website are as follows:

George Portz and the Friends of Bluegrass, founded in 1978, blends its fiery bluegrass roots with traditional Irish and Louisiana Cajun music. The band is based in southern Illinois and includes members from Illinois and Missouri.  The band performs dozens of shows a year throughout southwest Illinois and eastern Missouri.  A typical set contains bluegrass, traditional country, bayou/Cajun, and gospel music that entertains audiences of all ages.  In addition, the band hosts various fiddle contests each year.

Rising Son was formed in 2016 when five good friends from Southeast Missouri decided to use the talent God gave them to spread his word through music. They have a well-blended combination of bluegrass and gospel music. They are blessed with five lead singers, which gives them a broad spectrum of sound.

Logan Creek Band was formed in May 1979 by Randy Buxton and Kenny Albert in Ellington. In the beginning, the duo performed every weekend at Webb Creek Lounge using anyone they could find in the campground that could tap a beat with their foot to fill in on the drums. The present group consists of Randy Buxton, Kenny Albert, Tammy and Denny Tucker.

They have performed with Dan Seals, Gene Watson, Michael Tweety, Pirates of the Mississippi, Charlie McClain, Faron Young, Jimmy Houston, and other artists in the country music industry.  Along with the artists they have performed with, they have performed at many local community functions, including St. Jude benefits and the national-televised Jerry Lewis Telethon, where they performed as the featured band during the 24-hour marathon. Randy Buxton also performed for the Ozark Mountain Hoe Down for seven years in Eureka Springs, Ark.

The Punches is a bluegrass gospel group who make their home in the foothills of the Ozark Mountains. Mom Bobette, dad Bruce, and their four children all play instruments, sing, and have been performing nationwide at churches, festivals, fairs and special events since 2009. They’ve been featured on Great American Gospel (a weekly television show) in many countries and on over 200 stations across America.

Bruce and Bobette currently reside in Fredericktown. Bobette was raised in a musical family of seven kids, while Bruce grew up an only child and started playing at the age of 13. When they met, it seemed to be a natural fit and the rest is history.

Their son, Owen plays a Gibson RB-250 banjo. He also is a valuable part of the vocal blend of the family, holding down a few lead parts but mostly singing the bass line in the quartets. Emily (one of the twins) started playing fiddle at age 7. Emily has developed a rich voice and a sweet demeanor on stage and carries many of the high tenor parts in trios and quartets. She also sings much of the lead with the group. The other half of the duo is Brooke. Brooke also started on the fiddle at age 7. In fact, some of the early Great American Gospel videos have Brooke on the fiddle before she moved to the Dobro.

Don Joy is a singer and songwriter of traditional country music and started writing at the age 17. Don began singing at age 10. As he grew older, he began singing in various bars and clubs. A lifetime of music has taken him to such places as, Las Vegas MGM; USA World Show Case; Ellis Island Casino; Marina Towers; Country Jubilee and various Opry Shows and venues. He has recorded 15 albums and they have nine duet albums.

Melanie Lynn started singing at a very young age in church. She sang at various venues for several years before teaming up with Don. She grew up with traditional country music and a lifelong dream of pursuing a career in this industry.

They have been performing together since 2012 and have performed in numerous places in Missouri, Arkansas, Nashville, Iowa, South Dakota, Ohio, Indiana, Illinois, Kansas, Nebraska, Minnesota, Oklahoma, and Kentucky. They stand true to their country roots and the traditional country sound, plus a dash of light bluegrass, gospel, ’50s rock, and Irish.

The Red Light Band was started in the 1970s by Dennis Worley. Dennis, a native of Poplar Bluff started playing gospel music 50 years ago with his two sisters; they were known as the Worley Trio. Dennis has played for Narvel Felts, Leona Williams, and numerous other artists. Dennis plays lead guitar and is a vocalist.

Steve Wilkerson started 50 years ago with his dad and family as a family gospel group. He left and went to Branson and worked in theaters and played and toured with Roy Clark. He played steel on the Hee Haw Show. He left in 1989 and went to Nashville with Charlie Louvin. He played 12 years on the Grand Ole Opry, has played steel and Dobro for the Whites and Ricky Skaggs for nine and a half years. Steve played for Mickey Gilley, Johnny Lee, and numerous other entertainers. Steve plays steel, Dobro, lead, bass, mandolin, and vocals. Steve’s wife, Debbie, is also background vocals. Debbie worked 11.5 years for Charlie Louvin and on the Opry.

Steve Albritten, native of Southeast Missouri, has played bass for 35 years. He has played for many gospel groups and toured with the Nashville recording artists Southern Brothers.

Steve Wilkerson Jr. plays drums and is a vocalist. He is a Nashville studio musician. He played for Narvel Felts, Leona Williams, and Charlie Louvin. He was a drummer for the Carolina Opry in Myrtle Beach, S.C. Steve is married to Dani Haggard, granddaughter of Merle Haggard.

Looking for things to do Saturday? Here are just a few ideas.

After its original date was rained out, the Farmington Plein Air event took place last Saturday in the city's Community Garden, located at the…

Lindy LaChance’s parents encouraged his love for music. His mom, Lawanna, was their church pianist for 65 years and still plays daily, sometim…

Having already won many awards for its wines and wedding services, Chaumette Vineyards in Ste. Genevieve County has topped itself this time ar…

It’s a tough job, keeping the history of an old mining ghost town alive. But this town’s character is up to task, and is aiming to preserve hi…

KISS, Quiet Riot, Twisted Sister. Those bands caught the attention of 6-year-old Phil Hoffman. At that young age, he already knew he wanted to…

Auditions Sunday for next MAFAA play 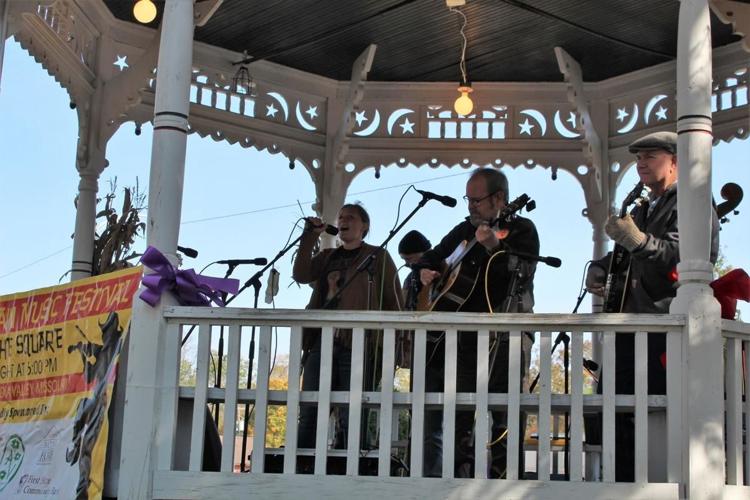 George Portz and the Friends of Bluegrass will once again grace the stage of the gazebo at the Arcadia Valley Mountain Music Festival on Saturday at the Iron County Courthouse. The festival starts on Friday night. 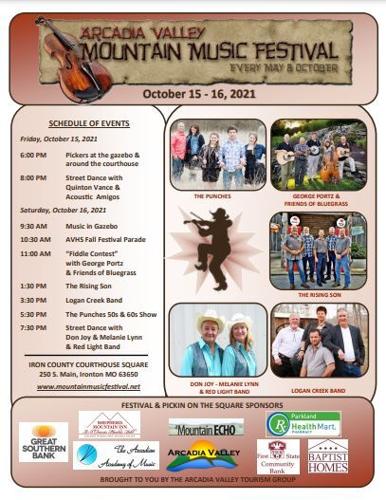