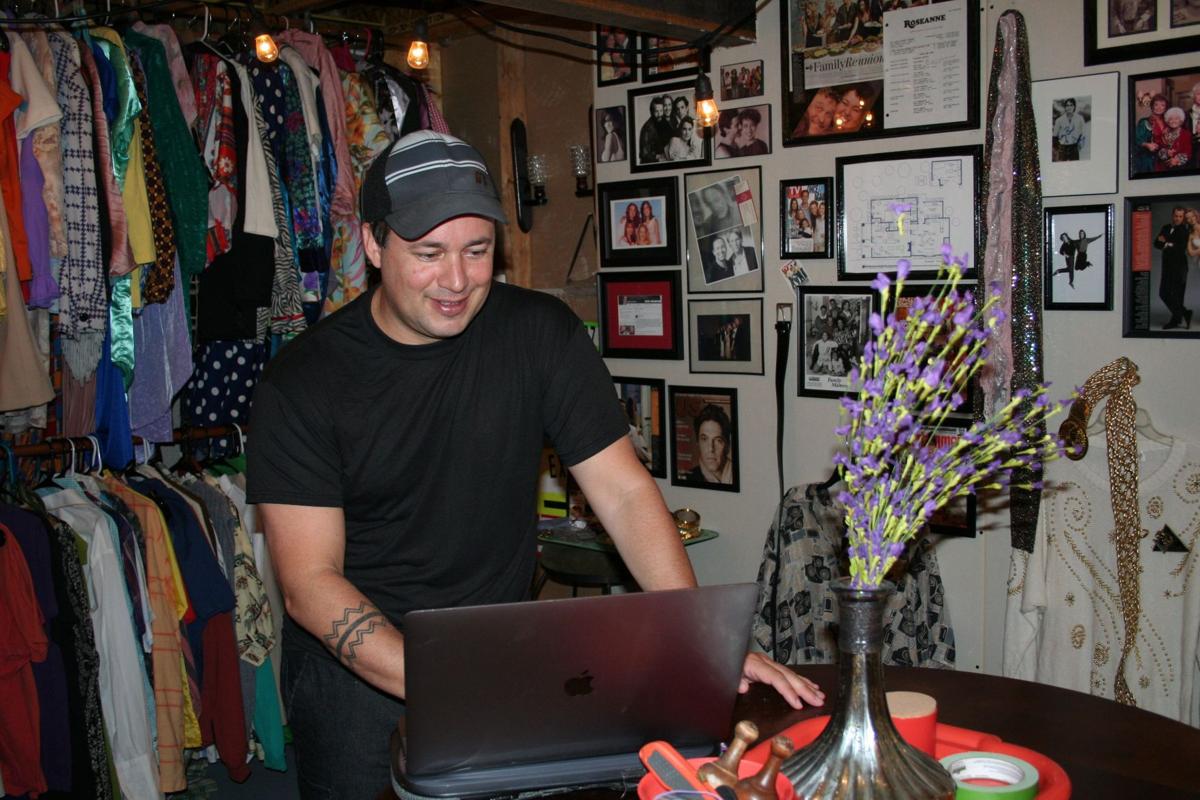 As a filmmaker and screenwriter, Dan Steadman is constantly working, either editing, writing scripts or working on tedious spreadsheets. For the local filmmaker, the end result makes all the hard work worth the long hours. Steadman takes a moment to work on some last-minute items before auditions this past Saturday and Sunday. 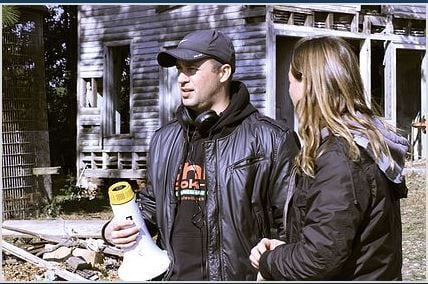 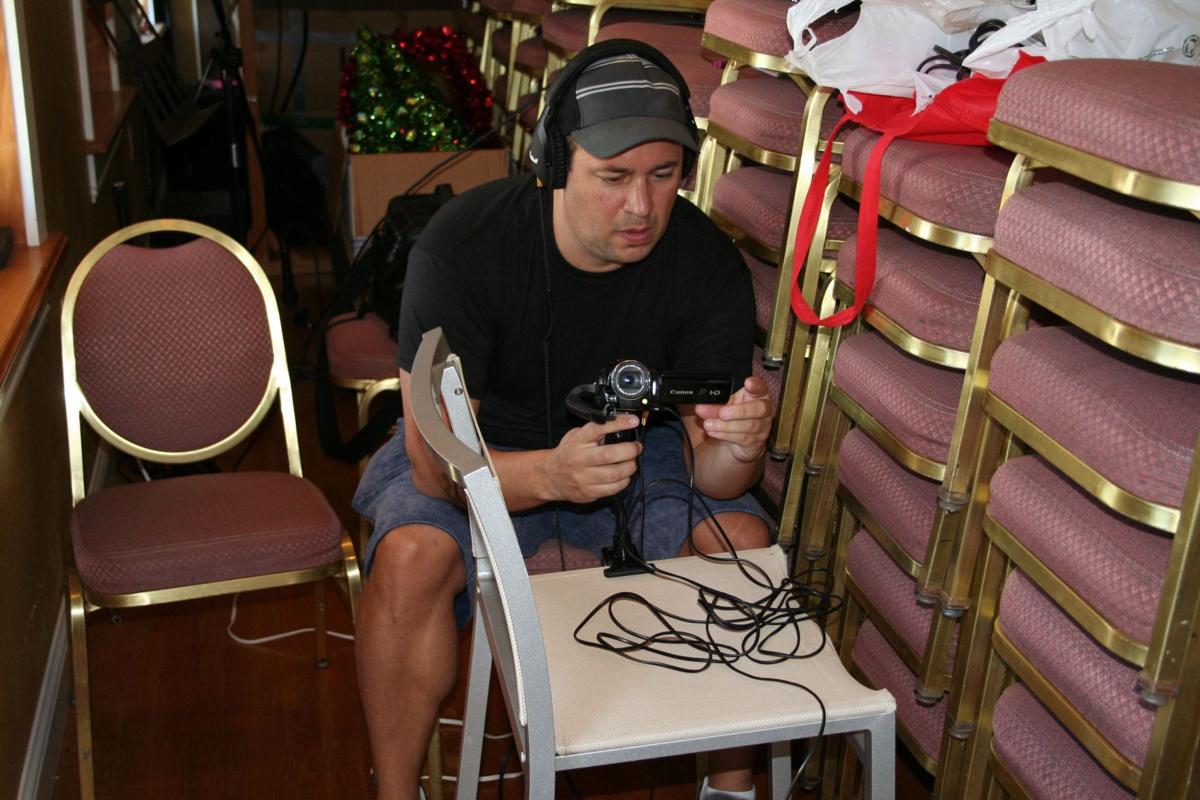 After the script is written and the locations scouted, Farmington filmmaker and screenwriter, Dan Steadman, begins the process of casting for his films in a small room at Durso Hills Winery and Bistro in Marquand on Saturday afternoon.

One local filmmaker is hoping to prove the road to stardom is not only paved in Hollywood.

Filmmaker, screen writer and movie producer Dan Steadman is showing the world that southeast Missouri has the essentials for making great movies. Talented actors and beautiful scenery are two reasons why Steadman found the transition from Los Angeles to Farmington conducive to his craft.

“I like that people in the area are actually excited about film making,” Steadman said. “I also like that it is much easier to find cool locations. I have shot scenes in a cave last year in Crystal City. I have shot on trains at Union Station, and Durso Hills Winery and Bistro will sub for a Hollywood studio in my next movie.

"There are such wonderful old buildings. You can’t do this in Los Angeles. You can’t even shoot in your own yard without a police officer asking for your permit. You're actually not allowed to shoot on private property – your own home – without a permit.”

Steadman also commented on the treasure trove of acting talent he has been able to tap into since moving to Missouri.

“There is a ton of acting talent in this area.” Steadman said. “In our film, 'Belleville,' Cooper Shaw is from St. Louis. She won the American Movie Award for our film, and that kind of changed people’s perception of what I am doing here.”

“I started on public access TV in 1987, so I have the taxpayers of Michigan (to thank) for my education,” Steadman said. “I was 14 and not old enough to drive to the set of my own show. I had to get a ride to executive produce my own TV series.”

Although Steadman laughs about the angst of being a 14-year-old producer, he pays tribute to his first break with the name of his production company – Circa87.

Many can remember having that one student in class completely focused on what they wanted to do in life. Steadman says he was that kid. He remembers how hard it was to go back to school in the fall after working on his own show.

For the next three summers, Steadman spent his time devoted to his work. He would eventually become more adventurous and develop a three-camera sitcom with a living room and kitchen set.

When talking about his first sitcom, Steadman can’t help but laugh at his early work and the things he did.

“It was terrible.” Steadman said. "... it was pretty clear I was stealing jokes from the 'Facts of Life' and 'Roseanne.' I don’t think I knew what plagiarism was at the time.”

According the local filmmaker, most of the things he was creating at the time were children’s series heavily influenced by the Children’s Television Work Shop – Sesame Street and Jim Henson.

“The shows were for a pre-school age because I owned puppets that were really well-made by a woman in my church,” Steadman said. “So, I was already in the producer mindset when you look at what you have – what resources – and say, ‘How can I make the best professional looking show with what I already have?'”

Using what was available or close at hand didn’t mean Steadman was lazy. Even as a teenager, he took his work very seriously by spending hours researching his craft.

“I went to the library and studied Jim Henson, The Children’s Television Network and the like,” Steadman said. “Remember in those days it was microfiche reading from the New York Times in darkened library resource rooms.”

After high school, Steadman kept doing what he was doing. He knew he was ready to move on, but not yet ready for Los Angeles. He admits he needed a transition city to polish his skills and ready himself.

“I knew I was going to go to L.A. but I knew I wasn’t ready to go from Michigan,” Steadman said. “I needed some growing up, a transitional city, so I moved to West Palm Beach, Florida for six years and made a music video series, and then finally Los Angeles.”

Like most artists who hit Los Angeles with a dream, Steadman found the city’s streets were not paved in gold ... but he remained focused. He took multiple temp jobs and slept on a lot of couches - whatever it took.

“I did a little bit of everything,” Steadman said. “I became more serious when I met my writing partner Rajeev Sigamoney and we started working together.”

For the next 10 years, the creative team produced more material than most. The chemistry between the two just clicked and they were becoming a writing force.

“I worked on 'That 70’s Show,' a really terrible Whoopi Goldberg series for NBC, called 'Whoopi,' 'Jimmy Kimmel Live' and stuff like that,” Steadman said. “But once we realized we were getting too old for that sitcoms ... we moved to features.”

One of the first feature projects the writing duo created was a movie starring Octavia Spencer before she won her Oscar.

“'Little Jesus' is a sweet movie,” Steadman said. “It just finished its run on Netflix and is about to ready to begin on Amazon Prime.”

While in California, Steadman and Sigamoney were prolific writers. They shot a pilot with Melissa McCarthy and Jennifer Coolidge, which seemed like it was going to be the big break-away hit. But the writer’s strike happened and the pilot never made the cut.

Steadman thought he caught the comet by the tail once again, but it didn’t pan out either.

“We shot a pilot on CBS lot called 'The Room.' It was about a writers’ room of a bad network sitcom called 'Momma Knows Best' starring Octavia Spencer again,” Steadman said. “It had an amazing cast and we got signed by an agency. We had studio head quoting our pilot, but we got passed on by 30 networks. They said middle-America doesn’t like shows about Hollywood.”

Steadman will admit rejection still hurts even after all the years he has been in the business. But, like any artist and storyteller, he moved to the next project.

For a short time it was Montana, then his critically acclaimed film “Belleville,” brought him to St. Louis and eventually to the Parkland, where scenes for that movie were shot.

In addition to making successful movies such as “Belleville,” “Love Chronicles (of the Cape),” and “Proximity,” Steadman also teaches the craft of acting. He is presently teaching classes in both St. Louis - at St. Paul United Church in Belleville on Saturdays and at the Metropolitan Community Church of Greater Saint Louis on Sundays .

“I teach my own classes, and I teach them consecutively but with two different groups of people,” Steadman said. “Sometimes I mix them up if we have a large group shot, but mostly I just shoot the same scene on both Saturday and Sunday.”

As an educator, Steadman doesn’t follow standard teaching procedures of just lecturing. His students take an active part in their learning.

“Everyone who takes my class gets a speaking part in my film,” Steadman said. “In my movie, 'The Shoe,' since it is an anthology, they get to film in every genre. It is a little more work, but each one will get a speaking part. At the end, I will only use one cast, but the rest of the actors will get the footage for their reels, whether it made it in the film or not. It’s a little more work for me, but I don’t (mind to) work harder if means more opportunity for people.”

Like most artist, Steadman is already contemplating his next project, and will undoubtedly find a place in the Parkland to gather writers, actors and interesting sets.

For information where to view Steadman’s films visit his website at www.circa87.com and for more information on the on taking acting classes email Ethan McDaniels at ethan@circa87.com.

As a filmmaker and screenwriter, Dan Steadman is constantly working, either editing, writing scripts or working on tedious spreadsheets. For the local filmmaker, the end result makes all the hard work worth the long hours. Steadman takes a moment to work on some last-minute items before auditions this past Saturday and Sunday.

After the script is written and the locations scouted, Farmington filmmaker and screenwriter, Dan Steadman, begins the process of casting for his films in a small room at Durso Hills Winery and Bistro in Marquand on Saturday afternoon.