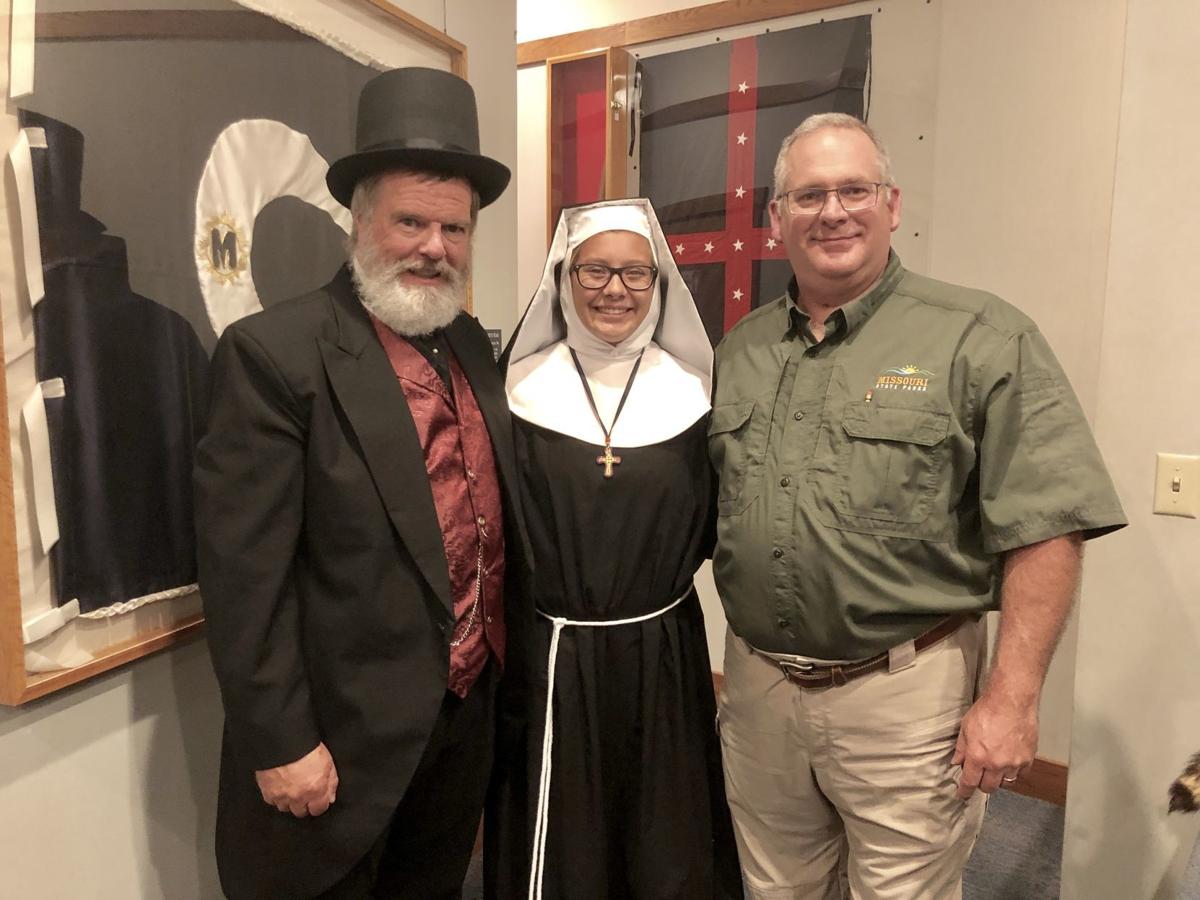 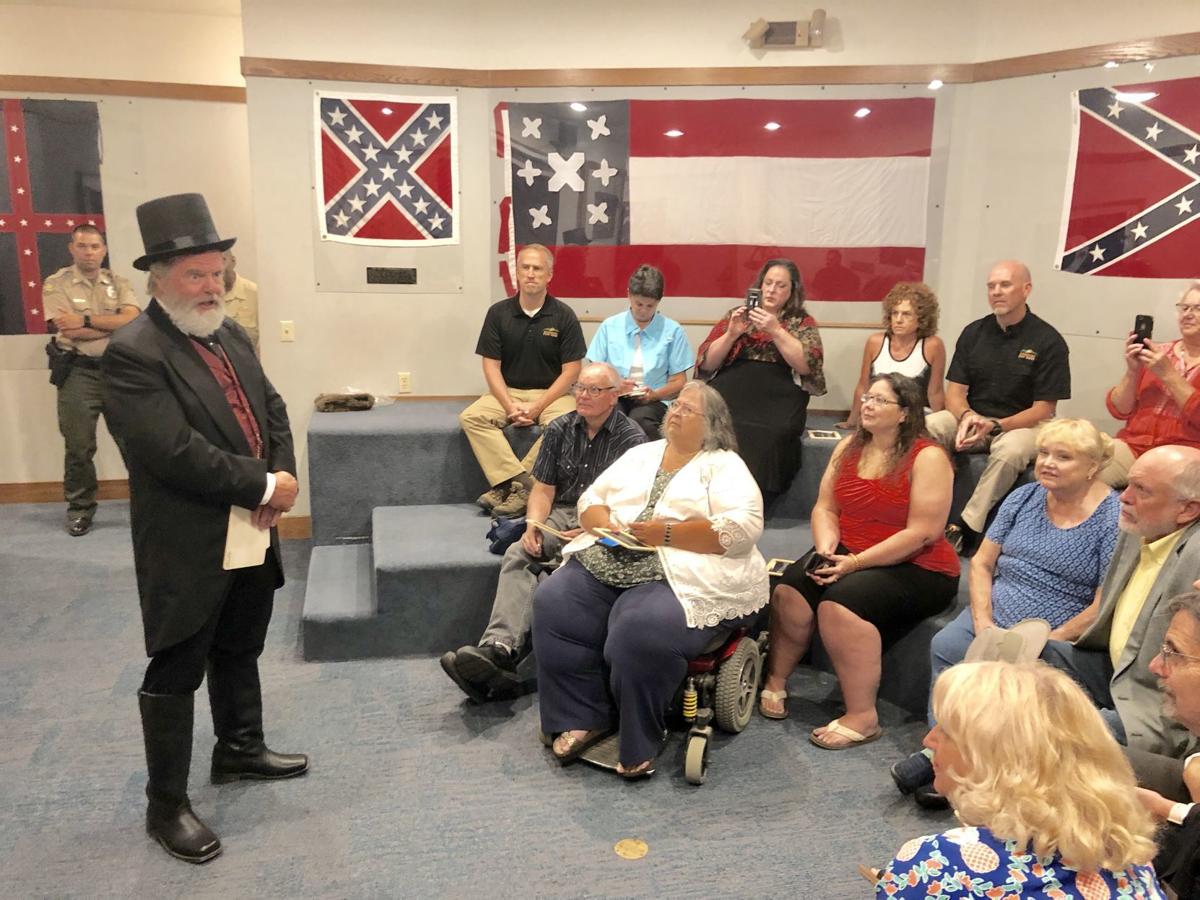 Rick Mansfield plays the part of the first Missouri Lt. Gov. William Ashley on Aug. 3. His portrayal of the historic figure helped paint a picture of the early days in history just as Missouri was struggling to become an official state. 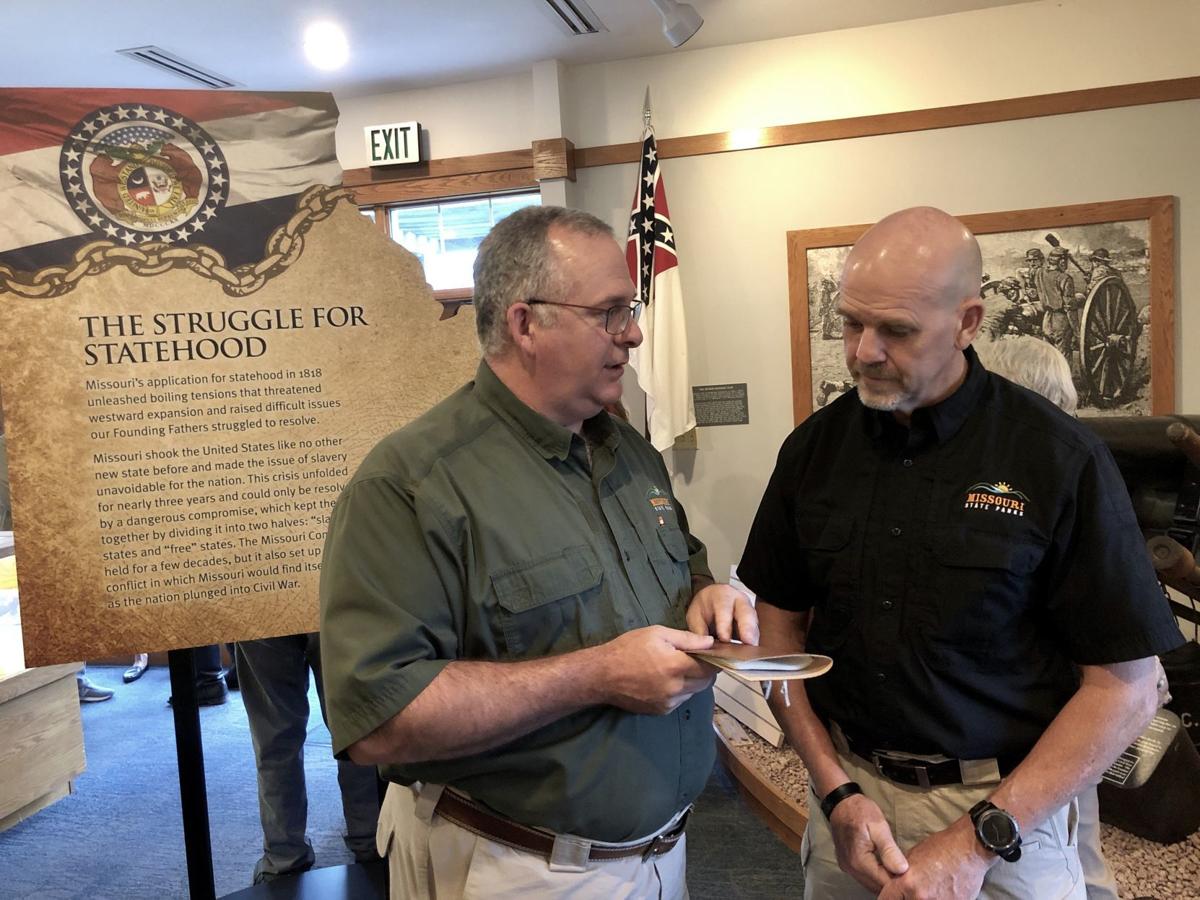 Natural Resources Director Bryan Bethel (left) shows off what the leather journals will look like and what the grant money will provide students throughout the area.

Rick Mansfield plays the part of the first Missouri Lt. Gov. William Ashley on Aug. 3. His portrayal of the historic figure helped paint a picture of the early days in history just as Missouri was struggling to become an official state.

Natural Resources Director Bryan Bethel (left) shows off what the leather journals will look like and what the grant money will provide students throughout the area.

The Battle of Pilot Knob State Historical Site has been chosen to have a traveling exhibit built by the Missouri Humanities Council.

The display entitled "The Struggle for Missouri Statehood" will be on display until Sept. 13 and is free and open to the public.

To celebrate the arrival of the exhibit, site staff hosted a kick-off event, Aug. 3 complete with two reenactors who helped submerse guests into the history.

For those who have visited the site before, you will notice the main hall has been transformed and filled with large panels of Missouri history.

Cynthia Dea, who portrayed Sister Philippine Duchesne, and Rick Mansfield, who depicted the first Missouri Lt. Governor William Ashley, spoke as their characters and what was happening during the struggle to become a state.

Mansfield, speaking as Ashley, spoke of his desire for money, his ability to make a decent amount of it without the use of slaves and how he became a footnote in history.

Dea's character Duchesne mostly read letters that had been sent back and forth about the schools of Missouri. Toward the end of the presentation, visitors find out Duchesne would become the first and only saint from Missouri.

The exhibit itself fills the main room of the site and is very thoughtfully pieced together.

"It gives a great interpretation into all the aspects and challenges that had to be addressed as Missouri became a state in 1821," Natural Resource Manager Bryan Bethel said.

Many were on hand to kick off the exhibit Saturday including Missouri Humanities Council Development Associate Claire Bruntrager who had a hand in putting the display together.

When asked what the most interesting part of the project was, Bruntrager said jokingly it was the engineering of the displays and that they can be steam cleaned. She then said it had to be how much the topic of Missouri becoming a state was talked about outside the state.

"It wasn't just Missourians that were concerned with it, there were anti-Missouri societies started outside like in New York," Bruntrager said. "It was a huge national question."

Bruntrager said because of the issue being so wide spread her research for the project took her places such as the Philadelphia and the New York Historical Societies.

Along with the new exhibit, Bethel said the site also received grant money to develop programs for school kids to teach them about how Missouri became a state.

"We will be doing a journaling project with 800 area kids starting in the fall," Bethel said. "Each kid will make a leatherbound journal in August or September. Then my staff and I will work with them several times over the school year entering into their journals culminating in a field trip to the historical site in the spring."

Bethel said the goal is to visit the students in early fall, around Thanksgiving and New Year's and then have the students visit the site during the mini reenactment and educational day in April.

Bethel said the journals will have enough pages for the entire school year allowing teachers to assign journaling assignments throughout the year. He said then at the end of the school year, the students will have a great keepsake to take home.

The journal program will also be making stops at all four branches of the Ozark Regional Library including a stop in Fredericktown at 6 p.m. Aug. 15. The addition of the library stops will give adults a chance to get in on the fun as it is open to all ages.

Have an upcoming event you'd like to see here? Submit now, it's easy and free.