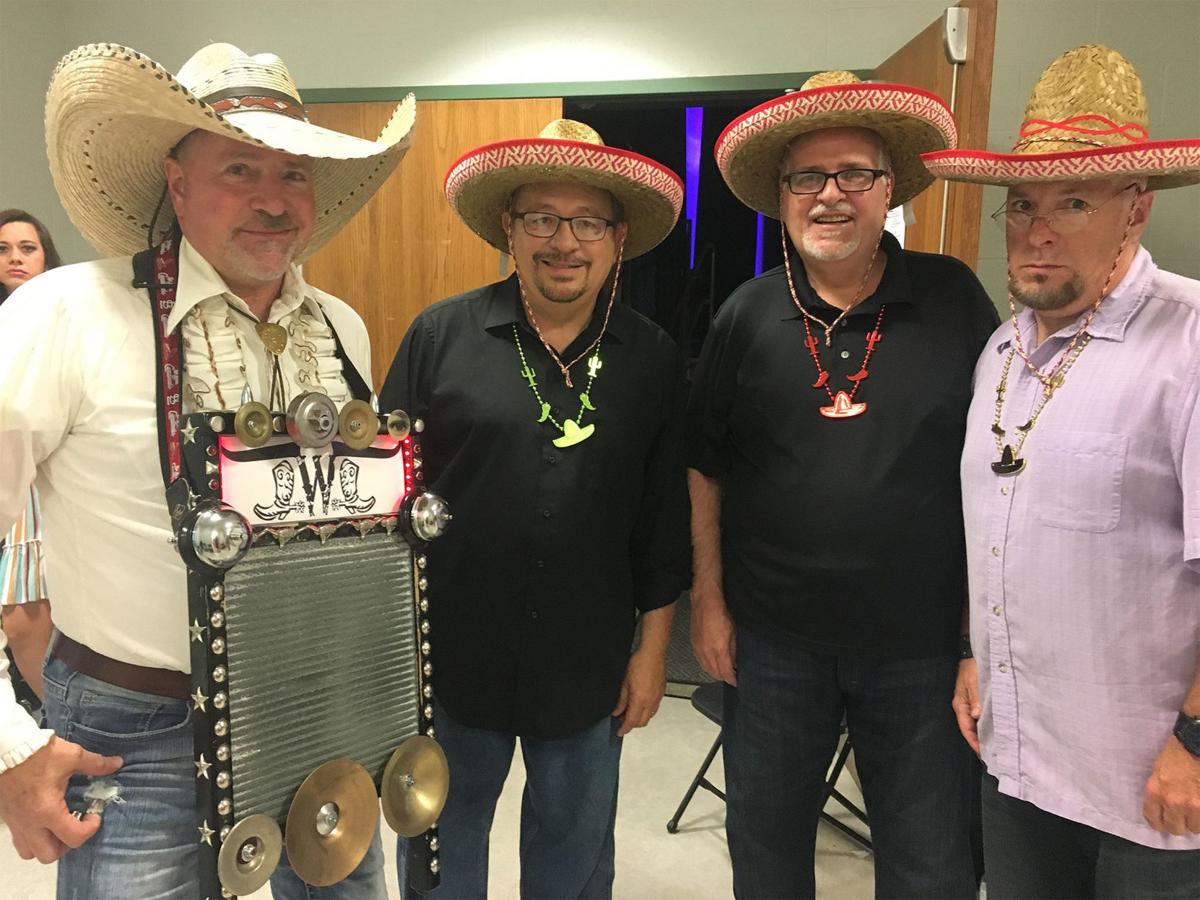 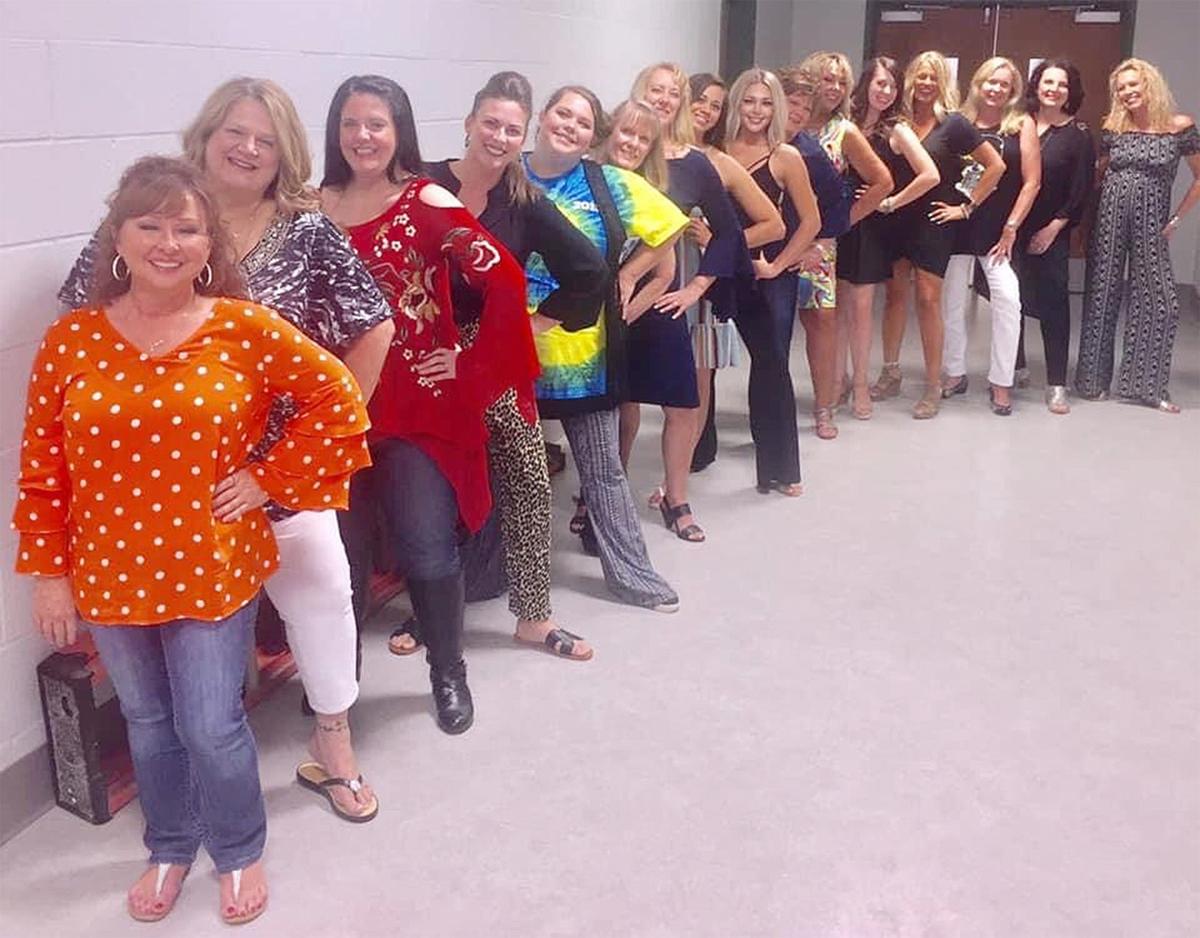 Pictured are all the female musicians who performed in the 2019 Baby Boomers concert. 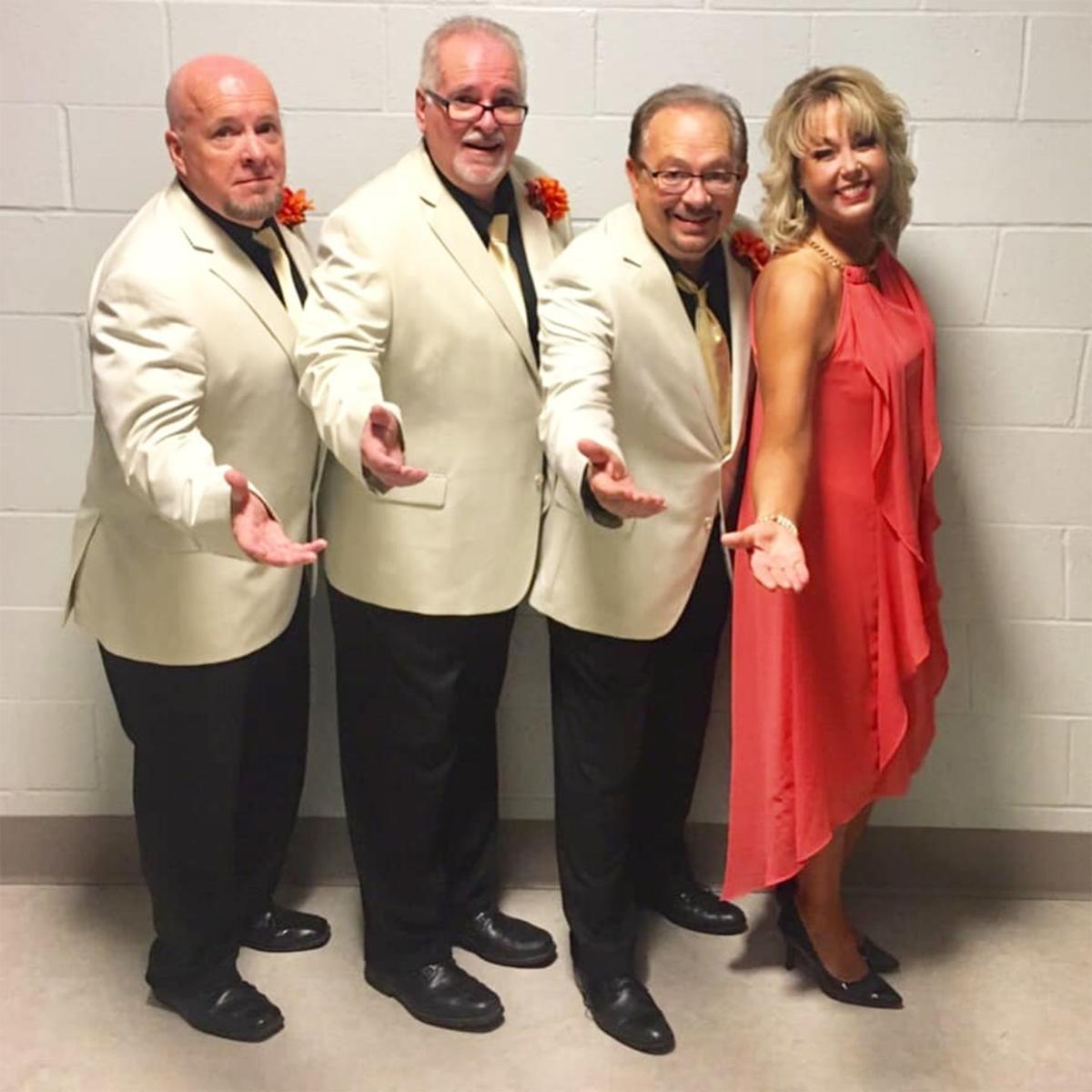 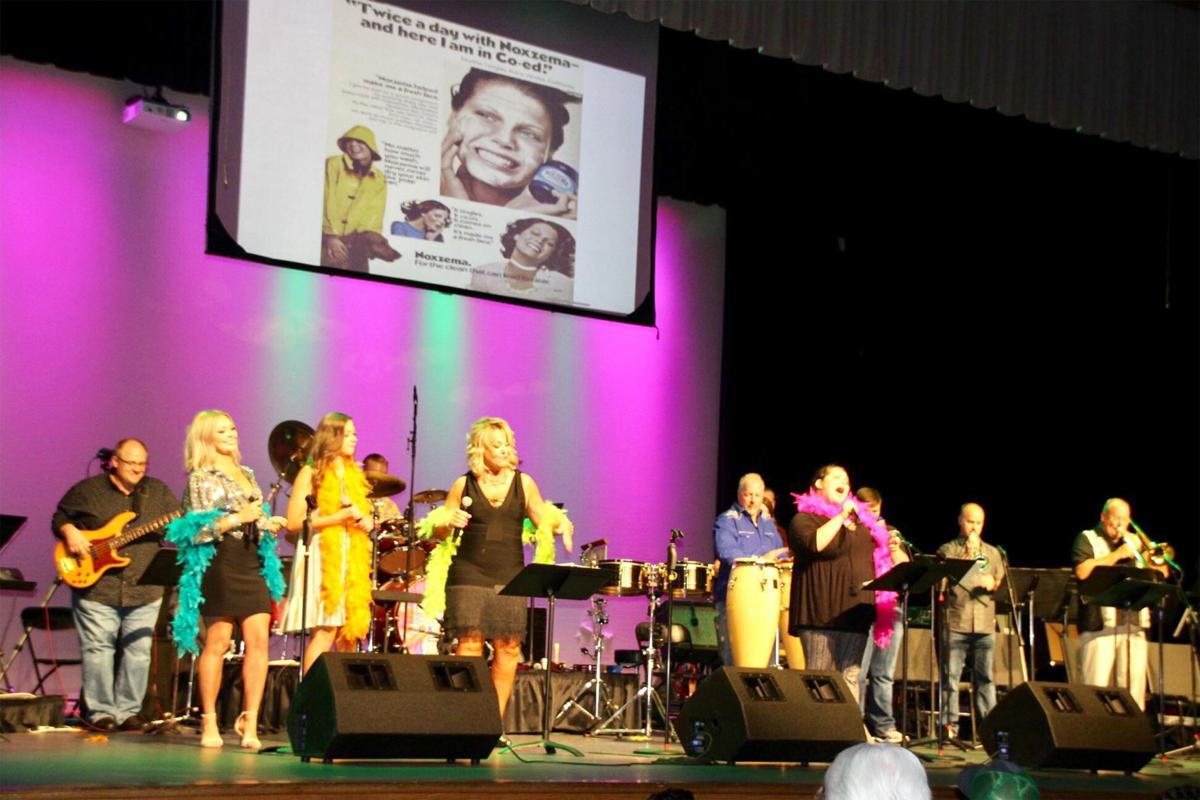 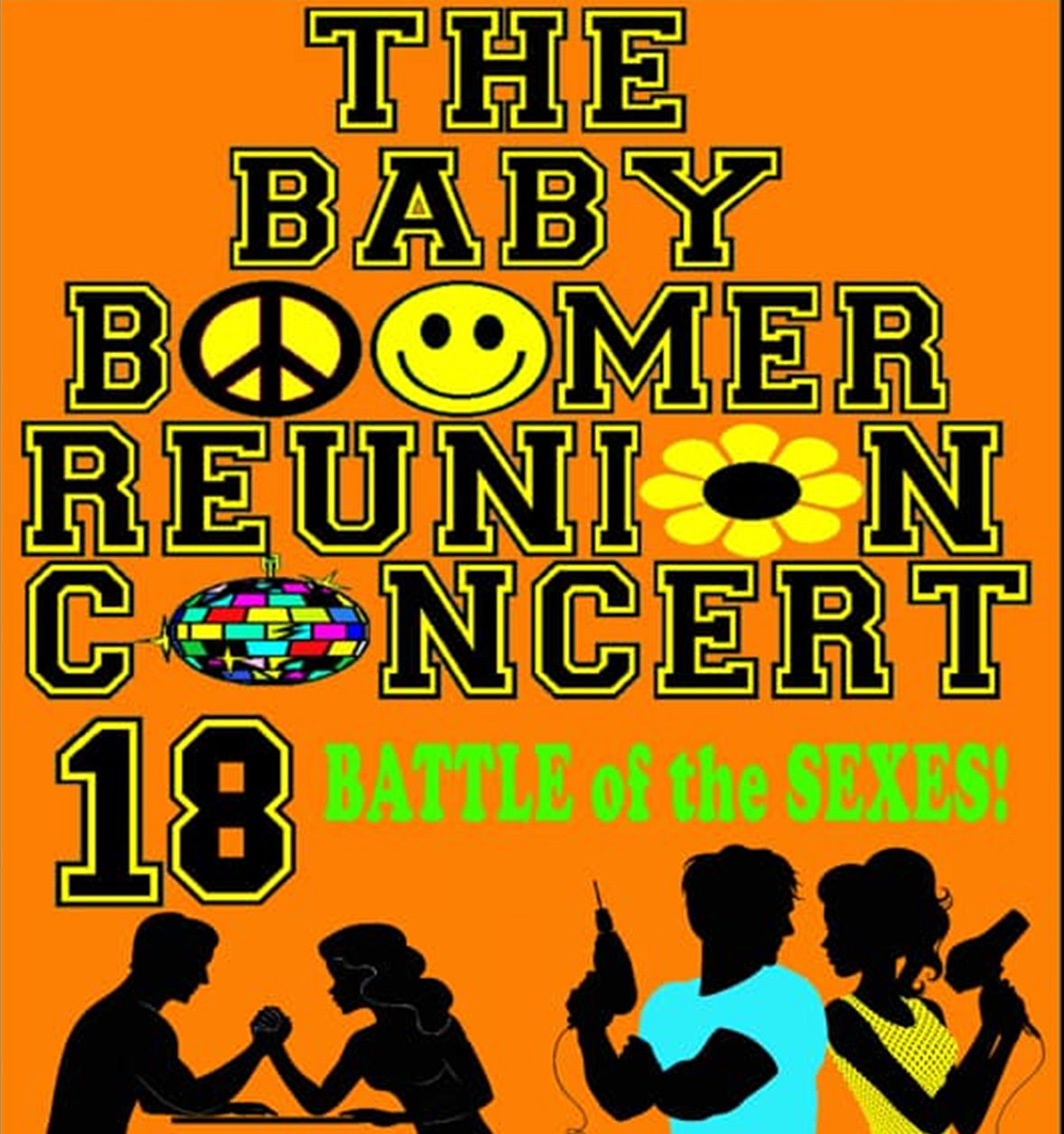 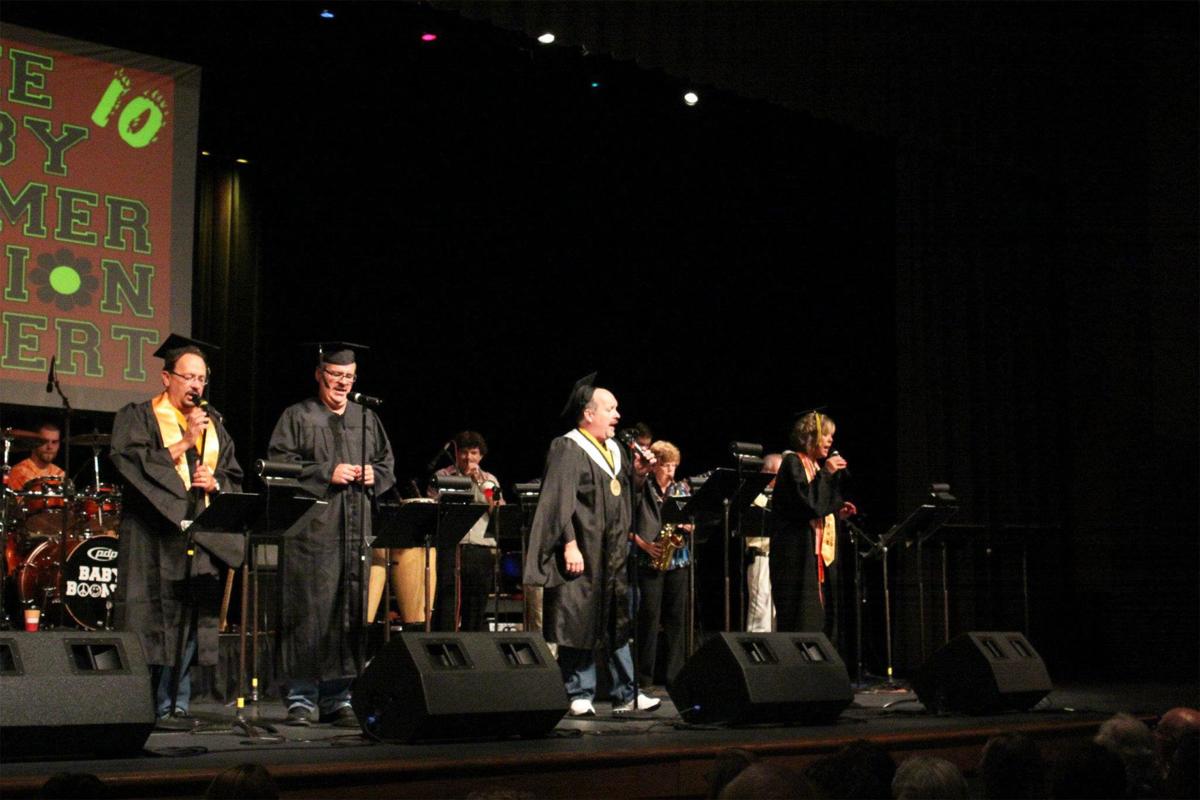 Baby Boomers concerts have a different theme each year.

This year’s performances – which usually take place the first weekend of August at Farmington Centene Center – have been moved to Nov. 13-14. This change was announced Tuesday afternoon by the civic center as a cautionary measure in order to avoid uncertainty regarding COVID-19 in St. Francois County.

It’s such an important event that the Berry family plans their vacations around it.

“Each year we mark another year’s passing with great music and great friends and lots of laughter,” said Marilyn Berry.

This year daughter Alayna Grace Berry even planned her summer wedding around the original concert date so she would be back from her honeymoon in time to perform.

Dr. Kevin White – whom Berry describes as a “musical genius” – is the creator and organizer of the event. He comes up with each year’s theme. This year’s theme is “Battle of the Sexes.”

The Baby Boomers Reunion group consists of alumni of Mineral Area College who are vocalists and instrumentalists.

The first Baby Boomers concert was in 2003.

Although Berry was not in that show, her husband Alan was. She has been in the concerts since 2004.

Each year White creates a theme for the concert. The first was Chicago songs. In 2004, it was The Beatles. In 2005, it was the ABC concert where the performers sang songs whose groups started with letters through the alphabet in order. Other past themes include Always a Bridesmaid, Never a Bride which was the only time White featured No. 2 songs; 1969; Love, which included songs with that word in the title; and even one year where all songs had an “I” in the title.

Berry said the ABC concert was such a huge hit that he did it again with different songs. He also insists on including only No. 1 songs.

As a result, Berry said, “The audience knows each song we sing and they love it.”

White has organized the concert in various ways over the years. During the early years, a group of the performers chose the songs together from White’s hit list and presented them to the vocalists who were good fits for particular songs. In the first years of performances, White burned CDs of songs and personally delivered them to the performers. Sometimes these discs would arrive only a few days before the concerts.

“But the musicians are outstanding,” said Berry. “There is nothing they cannot play. They can do it al!”

Berry said White writes out all of the music including all notes for instruments and vocalists for all songs.

“He makes all assignments and if that isn’t enough, each year he writes a medley to feature even more songs within his chosen theme,” she said. “Can you imagine how gifted Dr. Kevin White must be to write out all of our music?”

She said she admires White on so many levels. “Since he married his beautiful wife Rheannon a decade ago, our music has been on time. We have it earlier every year.”

Berry said all the performers are close; this is obvious because it can be seen from the audience’s view of how they laugh, relate to one another and thoroughly enjoy performing together on stage.

In the beginning, White added vocalists and instrumentalists as needed each year. After about a decade, he capped off the group at 50. Everyone has a tie to Mineral Area College except Berry.

“I went to Southeast Missouri State University but I am married to Alan,” she said, “so I got in. He was my ticket in.”

Another Berry – daughter Alayna Grace – was backup singer for her mother in 2012 and then became the youngest performer at age 15 to be asked to sing with the group in 2013.

“Her voice is incredible,” said Berry, “and she blew them away.”

For each show, Berry and Alayna average changing outfits about nine times.

“This involves lots of sequins, boas and hairspray,” she said. “Cans and cans of hairspray.”

Alayna and brother Boone have been part of the show since they were young. They’ve filled the roles as backstage singers and even actors. The Berry Brothers once sang Guitarzan where Alan was Guitarzan and Marilyn was Jane. Brothers Doug Berry was Ray Stevens and Steve Berry wore a huge gorilla costume. Boone played the role of Tarzan.

Berry said she has so many memories from the Baby Boomers Reunion Concert including when she and Alan were Sonny and Cher and sang “I’ve Got You Babe” and singing Tina Turner’s “Proud Mary.” Alan sang “Sweet Caroline” a few years ago.

Berry said she loves to sing Gladys Knight songs when the Berry Brothers are her Pips. One year they sang “Midnight Train to Georgia” and another year was “Neither One of Us.” She also enjoys performing Chaka Khan songs.

And she added, “The Berry Brothers have the moves!”

No matter what, they create suspense by never revealing what songs will be performed at the concerts.

During the performance, the band always has an Act I song and an Act II song without vocals, which are both crowd favorites.

For this year’s concert, a musician moved so a new individual will be welcomed into the Baby Boomers Reunion family.

Berry said the group rehearses one time before the performances. The band sets up on Thursday so they can run through each song. The lead singer and backup singers often sing the songs together only once before opening night on Friday.

“But the musicians carry us all,” she said. “They can make anyone sound professional. And without a Kevin White, this concert series would not exist.”

Alan Berry remembers the antics throughout the years. He and his brothers have been the Beach Boys in swim trunks, the Soggy Bottom Boys with beards, Three Dog Night in hair and Chicago.

For this year’s concerts, the Berry Brothers open the night as the Gatlin Brothers.

This year’s theme is Battles of the Sexes, meaning a gender word will be included in each song title.

“This should be lots of fun,” said Berry, “and I’m so happy to have basically fallen into this concert family. Each concert is my favorite. At some point in the years, we increased from one concert to two to now three.”

Located in the basement of The Factory in Farmington, many people might think of Aesop’s Treasury as just a used book store.

Hiking off the beaten path

There is no shortage of places to hike in the Parkland area.

If capitalism is the lifeblood of the American economy, at one point in the nation’s history, the railroad lines were the major arteries pumpi…

Eckert’s Farm, the family farm in Belleville, Illinois at 951 S. Green Mount Road, and in Grafton, Illinois at 20995 Eckert Orchard Road, has …

Pictured are all the female musicians who performed in the 2019 Baby Boomers concert.

Baby Boomers concerts have a different theme each year.