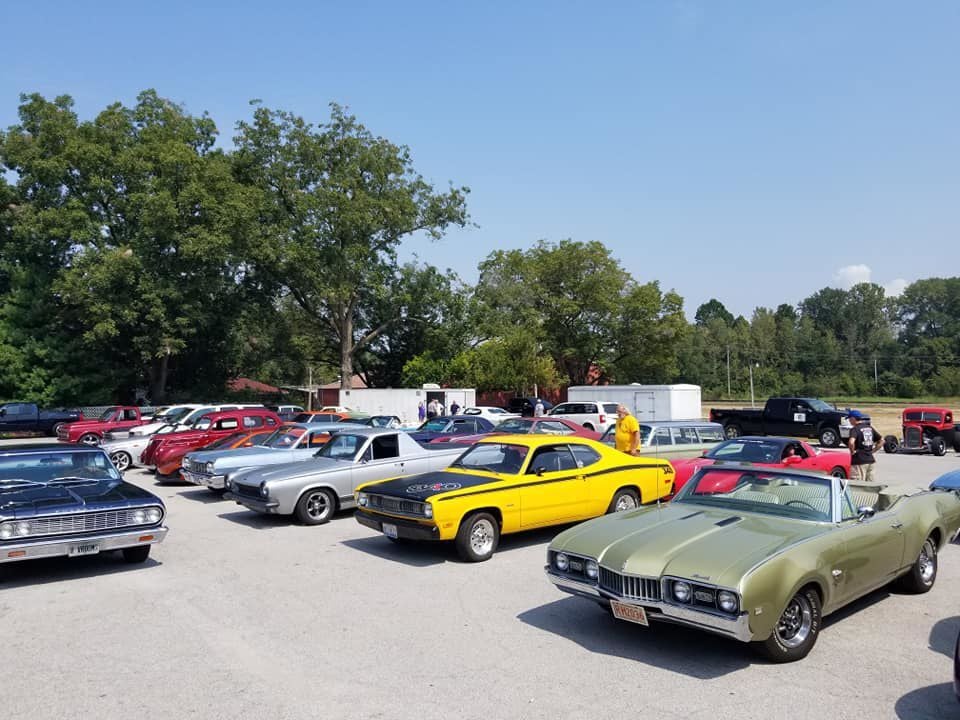 Members of the Octane Tour group gather in the parking lot across from the Audubon Restaurant in Ste. Genevieve Friday afternoon.

Car enthusiasts pose for a group photo at the Cave Winery in Ste. Genevieve County Saturday as part of the Octane Tour.

The annual Octane Tour is meant to be enjoyed by couples. This year's tour focused on Ste. Genevieve and downtown Cape Girardeau.

Cars of all vintages are parked at the Cave Winery in Ste. Genevieve County as part of the Octane Tour.

On Friday and Saturday, a large group of car enthusiasts swarmed the Ste. Genevieve area as part of an annual tour.

The Octane Tour of Southern Illinois and St. Louis Metro checked out several wineries in Ste. Genevieve County and cruised through the city of Ste. Genevieve.

“I created it to have couples go on the tour,” event organizer Matt Burcham said. “A lot of the things we do with cars, is mostly just the men go and they're more focused on car parts and car things where there’s not a whole lot of things for women to do.

"We put it together where it was for couples, that’s why we do things with the wineries, and I identify where there are places to go antique shopping and things like that.”

This is the seventh year of the Octane Tour. They try to plan a different tour every year and are often joined by local car clubs where they plan the tour.

“We have repeated a couple of times,” Burcham said. “The first route we did Hermann and Hannibal, Missouri. Last year we went to Springfield, Illinois, over by the river and Havana and Beardstown. We did a route down through Shawnee National Forest. This year’s route is Ste. Genevieve mostly, a little of Cape Girardeau downtown.”

Burcham explained that he was impressed with the Ste. Genevieve area businesses. They have given the group the best welcome of any of their tours.

“The response that the Ste. Genevieve businesses had with us coming into town was crazy,” he said. “Everybody had handmade signs welcoming the Octane Tour.

"Some people had even made up some dash plaques and handed them out to us and other people met us, and it was really cool. All these people were taking pictures of these signs and putting them on Facebook. It was nice to see the area wanted us here. We want to try and patronize these places as we can.”

According to Burcham, it is not just a one-time thing for an area. They come here with about 200 people who often plan trips back to the area and bring other friends with them as well.

The group spent the nights at hotels in Cape Girardeau and had a social event Friday night.

“Friday night we had a big cookout there in the parking lot with pork steaks, hamburgers, hot dogs and brats,” Burcham said. “People drank beer and had burnouts and fun stuff.”

Burcham plans the route every year and scouts the area. He then makes suggestions for the participants, however people are on their own.

“We had about 88 cars registered this year, some people couldn’t show up, we are probably down to about 75 cars. There’s two people per car. There’s several different clubs that are within here and people from all over the Midwest in here. It’s been growing quite a bit each year.”

The local arts in communities nationwide have taken an especially hard hit. COVID-19 has caused many cancellations, postponed many events and …

The Farmington Regional Chamber of Commerce announced last week that its annual Harvest Night, held around Halloween in the downtown Farmingto…

Treasure hunting in the historic Village of Caledonia is a perfect weekend outing.

Members of the Octane Tour group gather in the parking lot across from the Audubon Restaurant in Ste. Genevieve Friday afternoon.

Car enthusiasts pose for a group photo at the Cave Winery in Ste. Genevieve County Saturday as part of the Octane Tour.

The annual Octane Tour is meant to be enjoyed by couples. This year's tour focused on Ste. Genevieve and downtown Cape Girardeau.

Cars of all vintages are parked at the Cave Winery in Ste. Genevieve County as part of the Octane Tour.