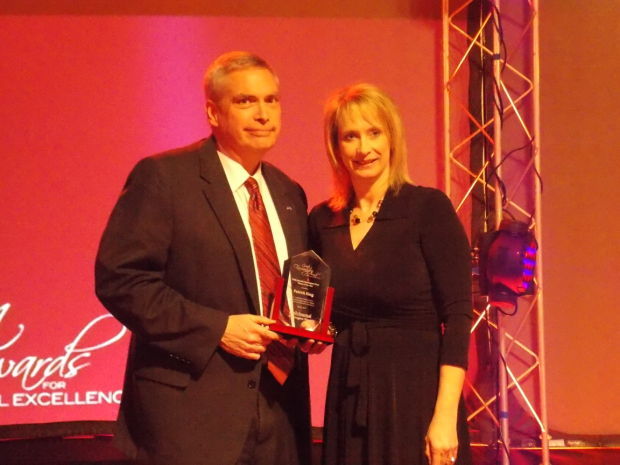 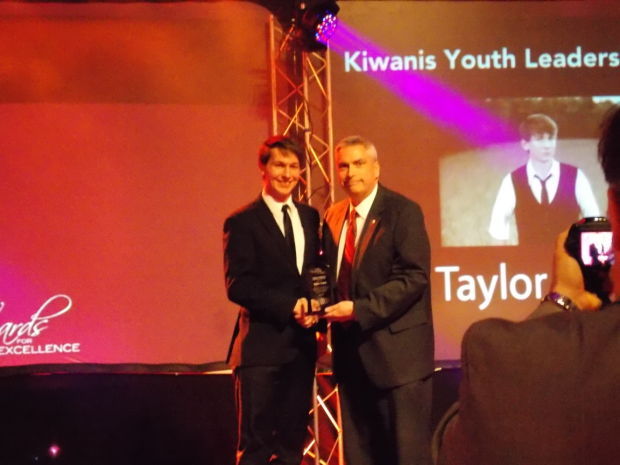 Taylor Crites is awarded the Kiwanis Youth Leadership Award by Patrick King on Friday night at the Greater Farmington Awards for Regional Excellence dinner at the Farmington Civic Center.

On Friday evening the Farmington Civic Center underwent a makeover from a gymnasium to the Farmington nightspot. Amidst the backdrop of multi-colored lights, white linen table clothes and music to coincide with the "Happy" theme for the evening, The Farmington Chamber of Commerce recognized area residents and businesses at the 2014 Greater Farmington Awards for Excellence.

During the awards portion of the evening, Shawnna Robinson, managing editor of the Farmington Press, delivered the Daily Journal/Farmington Press Citizen of the Year award to Patrick "Pat" King.

King, an assistant prosecuting attorney for the St. Francois County Prosecuting Attorney’s Office, has been an active member of the community since moving to the area in 1999.

Although King has been active in the community for his 15 years in Farmington, according to those who know him he is not a self-promoter nor does he volunteer his time and efforts for the reason of furthering his own position.

While presenting the award, Robinson spoke of King’s humbleness and his concern for others more than himself. She even predicted what King would say when he was notified of his award.

“There are so many others who deserve it instead of me,” King said. “So many other who do more than I do. I am just the guy who helps behind the scenes to direct where help is needed.”

During the award presentation, Robinson expounded on how King's accomplishments and devotion to the community were much deeper than just his commitment to the legal profession. For the last 10 years King has been on the Ministerial Alliance Benevolence Committee, serving as president. The committee oversees the alliance’s food pantry and thrift store. During his tenure, King has been known to roll up his sleeves or bundle up depending on the weather to help wherever he can.

“It was a cold winter morning when the St. Louis Food Bank delivered more than 20,000 pounds of food for distribution to 200 families,” Robinson told the audience Friday night. “Pat was found bagging heads of cabbage, lifting boxes into the trunks of vehicles and putting his faith into action.”

Robinson finished her presentation with a quote from famed humorist Erma Bombeck which, Robinson said, she believed best fit King. “Volunteers are the only human beings on the face of the Earth who reflect these nations’ compassion ... unselfish caring, patience and just plain loving one another.”

Crites, a senior at Farmington High School and an Eagle Scout, will graduate in May. In addition to his involvement in Scouting, Crites is the Drum Major in the Farmington March Band. The drum major is the highest leadership position in the marching band program.

“Taylor is great at reaching out to new people,” said Elliot Naes, assistant director of bands at Farmington High School. “He is always willing to help out and help the new kids with the things they need.”

Following the Youth Leadership award, the city of Farmington was awarded the Dockins Broadcast Group Quality of Life Award. The presenter noted Farmington Civic Center's commitment to promoting fitness and reaching out to all members of the community through programs such as senior fitness, the underwater Easter egg hunt, and Spring into Fitness contest just to name a few.

The KFMO/B104fm Super Service Award was presented to the Parkland Health Center, a member of BJC Health Care, for the donation of land for donating the land at the corner of East Liberty and North A Street as the location for the new Farmington Public Library scheduled to open in 2015.

The KREI/KTJJ 110% Award went to Chuck and Ardie Henson for their tireless service to the community over the years. As true role models, the couple has spent a lifetime of mentoring the youth of Farmington through Chuck’s coaching and the couple’s commitment to their church and civic projects.

The Farmington Downtown Development Association's Downtown Pride Award was presented to Wisdom Enterprise for their continuing effort in  the preservation of the historic heritage of the downtown historic corridor. It was said that Wisdom Enterprise worked tenaciously in keeping the integrity of the building which now houses Music Maker and The Ballet Arts Center.

The Partners in Prosperity Award was awarded to Bruce and Tiffany Marler for their commitment to the youth of Farmington through the creation of a web design course that offered youth a head start in the competitive computer field.

The final award of the evening was the Tradition and Progress Award, which was given to US Tool Group. During the video presentation of the company, the audience was shown the history of the local enterprise from its founding in 1958 by Paul G. Williams in a small local factory in Desloge to its present state of the art location in Farmington.

The tooling solution company's excitement of their recent move to Farmington was heralded by the company president, Bruce Williams, when he yelled to the audience “We love Farmington.”

The awards banquet was held Friday at the Farmington Civic Center.

Craig Vaughn is a reporter for the Farmington Press and can be reached at 573-756-8927 or at cvaughn@farmingtonpressonline.com

Taylor Crites is awarded the Kiwanis Youth Leadership Award by Patrick King on Friday night at the Greater Farmington Awards for Regional Excellence dinner at the Farmington Civic Center.