Easton Lashley throws out terms as quickly as his hands work to solve the colored cube puzzle.

On Tuesday, the third grader at Washington-Franklin Elementary School in Farmington spoke about how he came to love solving the cube puzzles – often referred to as the brand name “Rubik’s Cube” – and his trip to the CubingUSA Heartland Championship in Minneapolis, Minnesota.

Easton, 9, said the real interest in solving the cubes began less than a year ago when he picked up the cube received years earlier.

“My first try, I got like one side,” he said. “But, everybody gets that at some time.”

The cube would then sit on the shelf until he found a video on how to solve a cube online.

“I saw a video where somebody just solved (a cube) in 5.25 – world records change a lot – but, I saw that so I picked up my Rubik’s Cube and I went to my tablet and looked up some videos … on how to solve it. It took me almost two minutes, but I got better and better to one minute.”

The method he said helps him most of all was the CFOP method, at which point he begins to use all the cubing “code” needed. The Fridrich (or CFOP) method is the most commonly used speed solving method due to its efficiency, simplicity and low-algorithm knowledge requirements

“It’s just like F2L – instead of doing one layer first, you do two layers at the same time,” he said. “That’s how you get faster.”

The method is “kind of hard to learn at first and it took me a couple of days or so,” he added. “It’s not the easiest that you would imagine, but it works.”

Of course, this is while he’s solving the 3x3 – cubing speak for the typical cube that is three rows vertical and horizontal. There’s also the 2x2 – where he perfected his quick solving skills before trying it on the larger cube.

“Then, after that, I started to learn how to do the 4x4,” he said, adding he also solved a “pyramix” which is a pyramid-shaped puzzle.

And, the cube puzzles he uses now are designed for fast, frequent use in competition in events. The inner workings of the pieces are magnetic, which means they won’t break if dropped and can handle the constant, quick turning needed for cubing events. He said they are found online or at cubing events.

This past weekend, Easton and his dad, Ronnie, traveled to the Minnesota for the contest.

At the competition, he placed 33rd out of 300 competitors. And, he was one of the youngest there as well.

While there, he was able to pick up a new solution skill – a T-permutation – or, T-perm for short.

“I learned a J-perm as well as some other algorithms,” he said.

One highlight for Easton was hearing from Kevin Hayes, “a pro at the 4x4 cube,” according to the local youth.

Lindsey Smith is the counselor at Washington-Franklin School. She said Easton is a perfect example of the character word “perseverance” students are studying at the school.

“We are super-proud of Easton persevering with wanting to learn how to do this Rubik’s Cube,” she said.

He gets each cube ready before solving, then counts down with “three, two, one, go” before he starts.

“It’s very fun once you get into solving it more and more, because you see your time drop and I’m under 40 seconds now,” he said. “At the competition, as soon as I was just starting … I just improved every single day.”

Part of the solving involves muscle memory, leading in part to the speed which he solves the puzzle.

“I can’t really do it slow at all,” he said, “I can only do it fast” as he continued to solve the cube.

He hopes to compete at other events in the future. He’s planning to attend one in St. Louis. Besides the contest, he knows there will be the opportunity to learn more algorithms to solving the puzzles.

Shawnna Robinson is the managing editor of the Farmington Press and can be reached at 573-518-3628 or srobinson@farmingtonpressonline.com 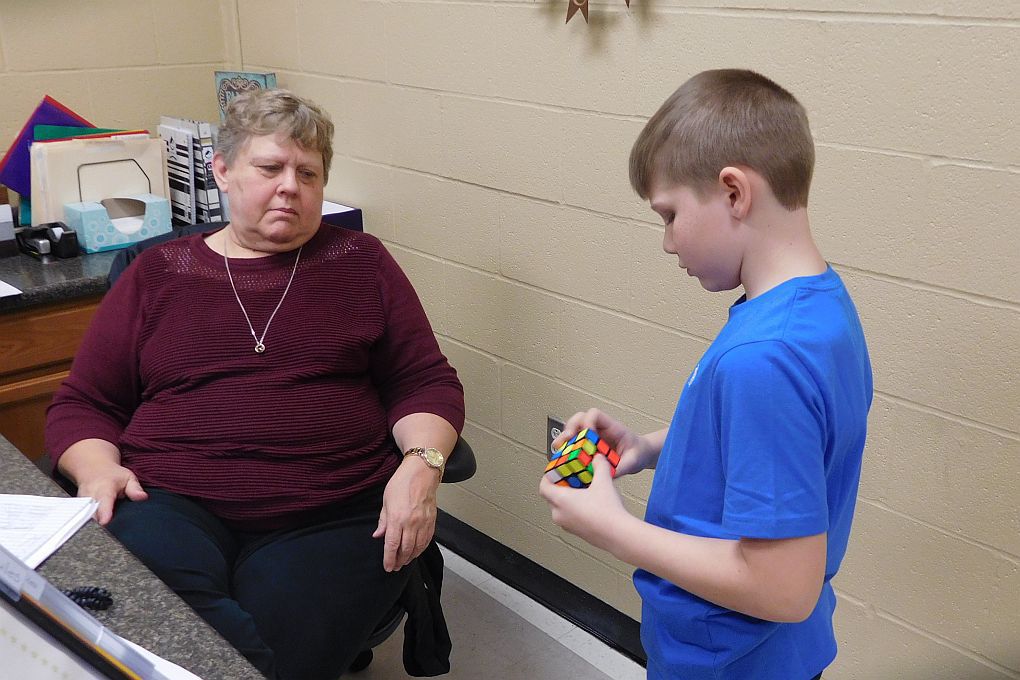 Easton Lashley shows Eunice Oliver some of his skills with the game cube at Washington-Franklin Elementary. He can solve the puzzles in less than 40 seconds. 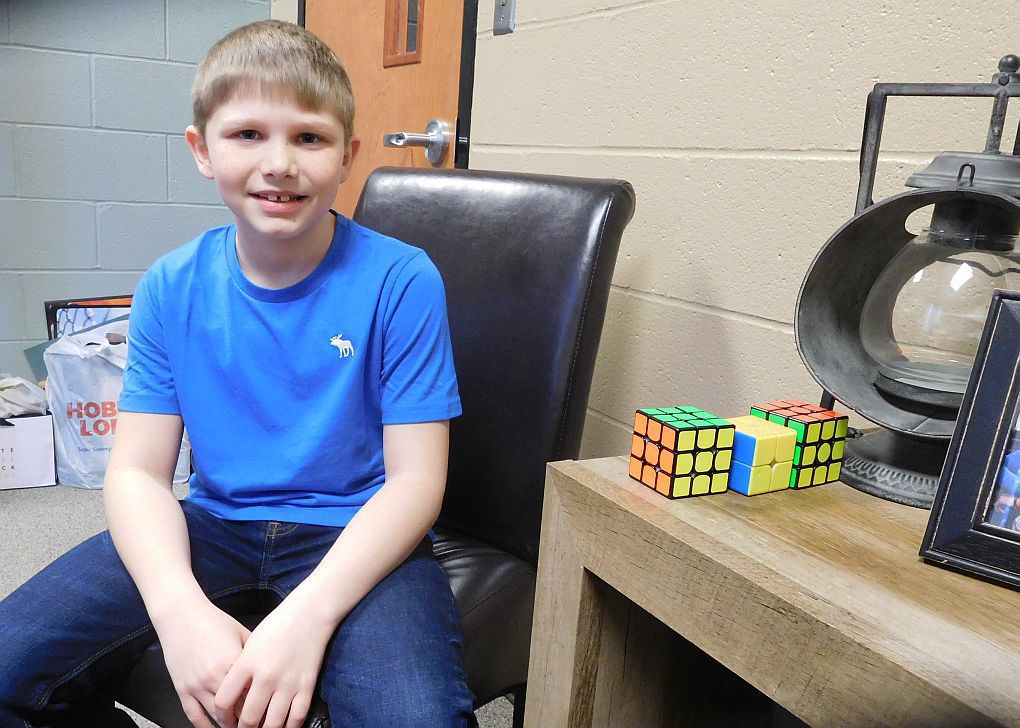 Nine-year-old Easton Lashley is a third grade student at Washington-Franklin Elementary in Farmington and a wiz at the cube puzzles. He recently traveled to Minnesota with his dad, Ronnie, to compete in the CubingUSA Heartland Championships.