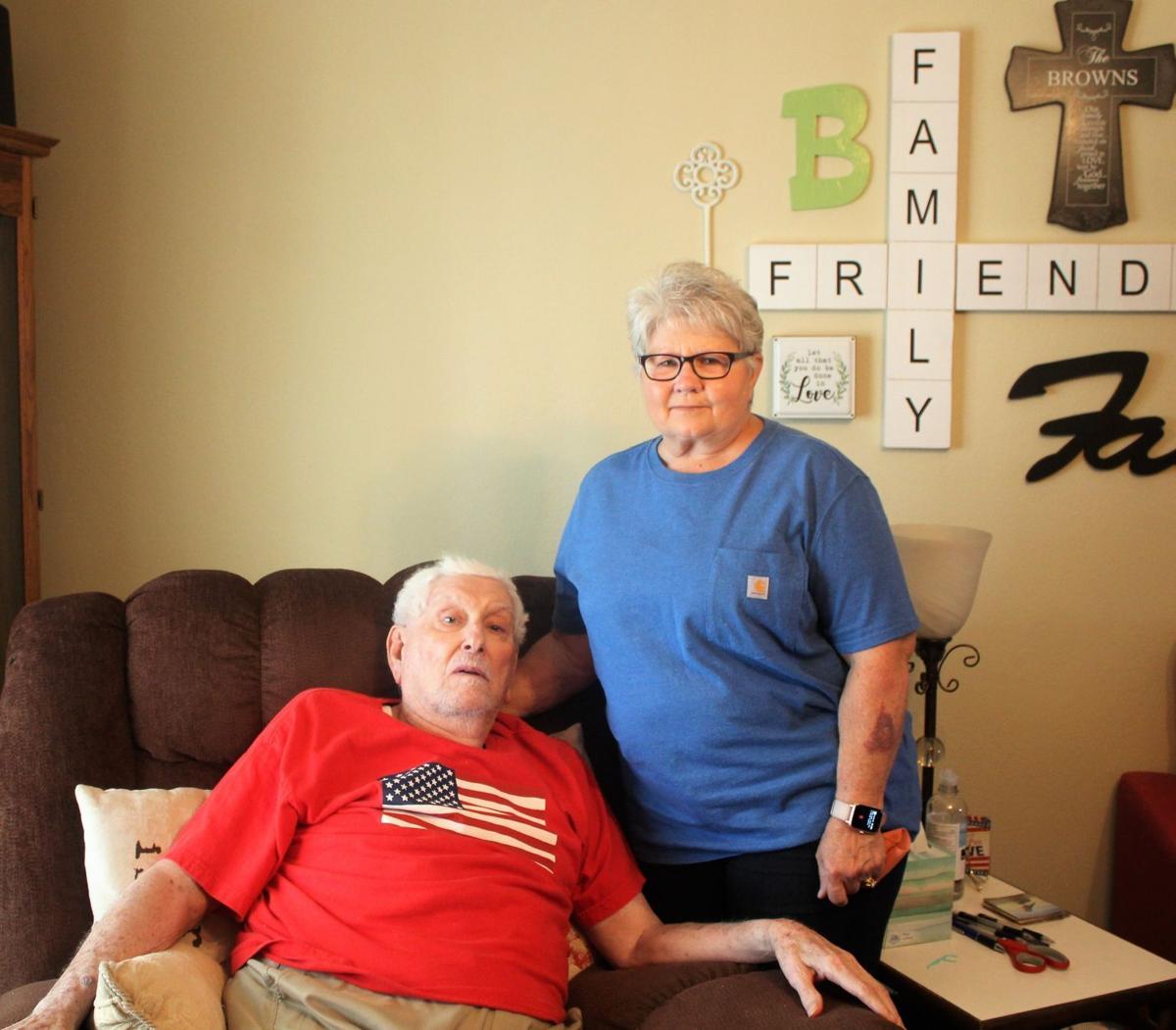 Both Franklin and Wendy Brown contracted COVID-19 in early December. The virus sent Franklin to the hospital shortly after. He finally got to come home this week. 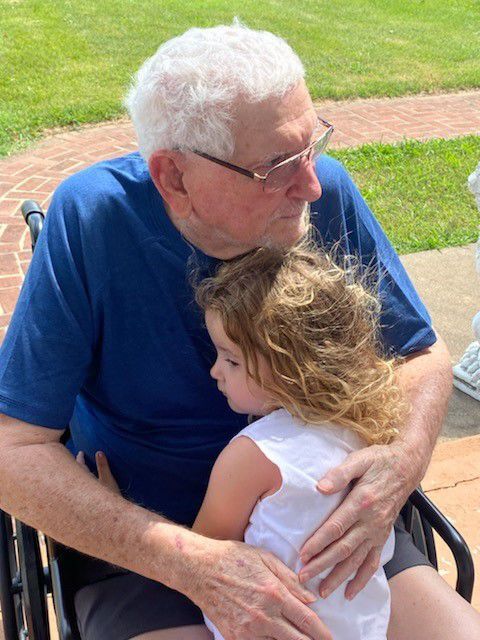 Franklin Brown gets a hug from his great granddaughter Abby Lashley at his welcome home celebration Sunday at Sugar Maple Estates in Desloge.

Wendy Brown was told multiple times by doctors that she should think about taking her husband off of the ventilator and taking him home to be comfortable.

Franklin Brown, 80, was in the hospital with COVID-19 and doctors didn’t think he would recover.

But Wendy never gave up hope, and after over six months in the hospital and a rehab facility, Franklin came home to Desloge this week.

“They did say if he hadn't been such a strong person that he probably would not have made it,” she said. “But he played golf every day and he didn't sit at home, so he wasn't a typical 80 year old.”

He was also a competitive barrel racer, who raised and trained the horses, up until 2016 when he had to have seven surgeries on one knee. He had contracted a staph infection after knee replacement surgery and it almost refused to go away. They thought he might lose his leg.

“So he’s been through a lot,” Wendy said. “Everyone says that he's got nine lives. He just keeps coming back from everything.”

Franklin, who is retired after 40 years with the railroad, tested positive for COVID on Dec. 7 and had to be taken to Parkland Health Center not long after.

“From then on, he just kept getting sicker every day and so we finally had to call an ambulance on the 12th, the 12th of December,” she explained. “I think he had been there just two or three days when they called and said they are going to have to put him on a ventilator.”

Wendy, too, tested positive for the virus.

“We both had it at the same time,” she said, “but his just went to his lungs and mine didn’t.”

He was at Parkland until he could be transferred to Barnes-Jewish Hospital on New Year’s Eve, a day before his 80th birthday.

“We just had to wait to get a bed open,” she added.

At Barnes, they had to put in a trach tube three different times.

“They had taken him off (the ventilator) two or three times to see if he could breathe on his own and every time he failed,” she explained. “Well, after about the third time, they said that they're going have to put in a trach.”

With the rotation of doctors, every Monday they would see a new doctor. Each one had the same message for Wendy.

“Every week, the new doctor would tell us that we need to think about just taking home and letting him be comfortable because he’s 80,” she recalled. “He’ll probably never come off the vent. He’s 80; he'll never be able to walk again or whatever.

"Every week, it was the same thing that we need to just try to make him comfortable and take him off the vent. And we just kept telling them no.”

His heart, kidneys, liver, and everything else were still working.

“And that's what we told them,” she added. “If his organs start shutting down, then we'll talk to you about it but not until then.”

Because of COVID restrictions, Wendy — who has been married to Franklin for 18 years — wasn’t able to see him until Feb. 4. But she and his daughter, Holly, drove to St. Louis every day, even in the ice and snow, and sat in the waiting room just in case they would be allowed to see him.

Up until then, they had talked to him on Zoom every night even though he wasn’t aware.

“It was horrible,” she recalled. “Because the way they kept talking, of course, giving us the talk, we just didn't know if we'd ever seen again. They kept saying we don't know if he'll ever come off the vent.”

On Feb. 12, Franklin was transferred to Kindred Hospital. After two or three weeks there, he was able to get off the ventilator.

But it wasn’t too long after that he had to be rushed back to the emergency room at Mercy Hospital.

“It wasn't anything to do with his lungs,” Wendy said. “It was bleeding. They didn't know where he was bleeding from.”

The doctors at Kindred initially hesitated to send him to Mercy until he couldn’t handle the pain anymore.

“They had to give him five pints of blood as soon as they got to Mercy,” she added.

That’s when he was at the very worst.

“We didn't know if he would make it,” she said. “And they didn't either because they didn't really want to put him back on a ventilator another time.”

The doctors asked Franklin about going back on the ventilator, but he wanted to breathe on his own as long as possible. But the doctors didn’t expect that to be very long. They thought they would have to make that decision after a couple of hours.

Wendy hadn’t heard anything by 11 p.m., so she gave the doctor a call. He said Franklin was still breathing on his own.

“(Franklin) said, ‘I could feel Jesus’ hands on me all night long,’” she recalled. “And the next morning, he was still breathing on his own.”

As for the bleeding, the doctors figured out his prostate was bleeding into his bladder and causing blot clots.

“But after the doctor got in there and cauterized all those blood vessels that were bleeding, (the doctor) said, ‘he is going to be much better now,’” she said.

Franklin also dealt with pain from a large bedsore that had started to develop at Parkland. The doctor in the ICU at Mercy said he’d never seen anything like it.

“It was horrible and that hurts him so bad,” she said.

On March 27, he was transferred to Camelot for three months of rehab.

“He could do nothing when he got there,” she explained. “He couldn’t move his arms, his legs. He couldn't do anything and they were still feeding him through a tube in his stomach. So he had to have therapy, pretty much, to do it all.”

He even had to learn to swallow again. He had speech, occupational, and physical therapy every day.

“Everything was gone,” she added.

But last Sunday, Franklin was finally able to come home. He doesn’t need oxygen. He’s walking with the help of walker and his wound is slowly healing.

And he’s eager to get back to the golf course.

“It’s been a rough, rough go,” he said. “Everybody thinks as much as I’ve been through, that I’m pretty tough.”

Wendy added, “He's been through a bunch, but he just kept surprising them all.”

She said it’s wonderful to have him home again.

She has been measuring time in holidays. Franklin missed Christmas, his 80th birthday (New Year’s Day), their anniversary (Feb. 9), Valentine’s Day, and Easter.

“I kept telling everybody, ‘he'll surely be home for the Fourth of July,’” she said. “But I was about to run out of holidays.”

She said she couldn’t have gotten through without the support of Holly, her son, and her church community.

“I just feel sorry for the poor people that their loved ones died and they never got to get in there and see them,” she added.

The Farmington School Board voted to extend the emergency mask mandate during a contentious meeting Tuesday evening at Truman Auditorium.

A 27-year veteran of the St. Louis Metropolitan Police Department was charged Monday with three counts of child molestation — accused of touch…

Annapolis man injured after collision with locomotive at railroad crossing

An Annapolis man was seriously injured after his vehicle reportedly struck a train on Thursday night.

Both Franklin and Wendy Brown contracted COVID-19 in early December. The virus sent Franklin to the hospital shortly after. He finally got to come home this week.

Franklin Brown gets a hug from his great granddaughter Abby Lashley at his welcome home celebration Sunday at Sugar Maple Estates in Desloge.