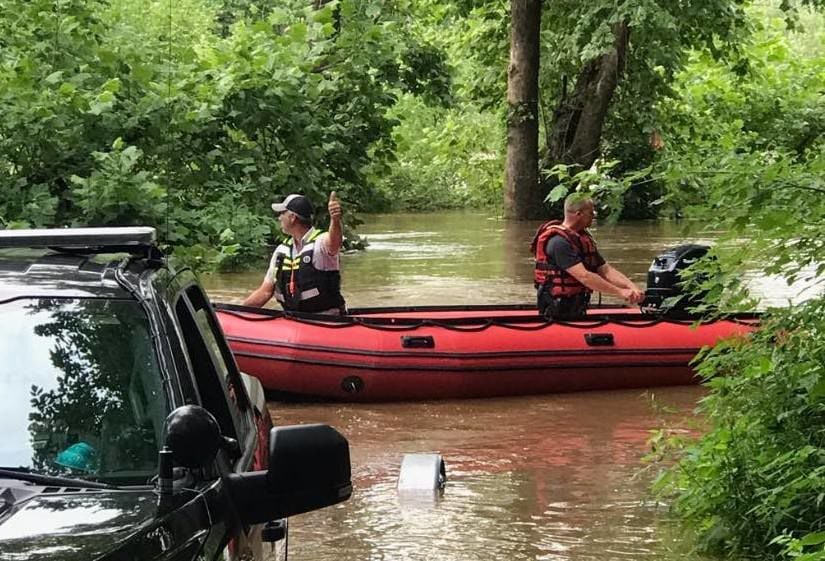 Madison County Emergency Management Director Dean Stevens gives a thumbs up as he and MSHP Cpl. R.A. Walker steer the rescue boat towards two individuals who became trapped on the St. Francis River on July 16, when flash flooding quickly brought the water levels up to flood stage. 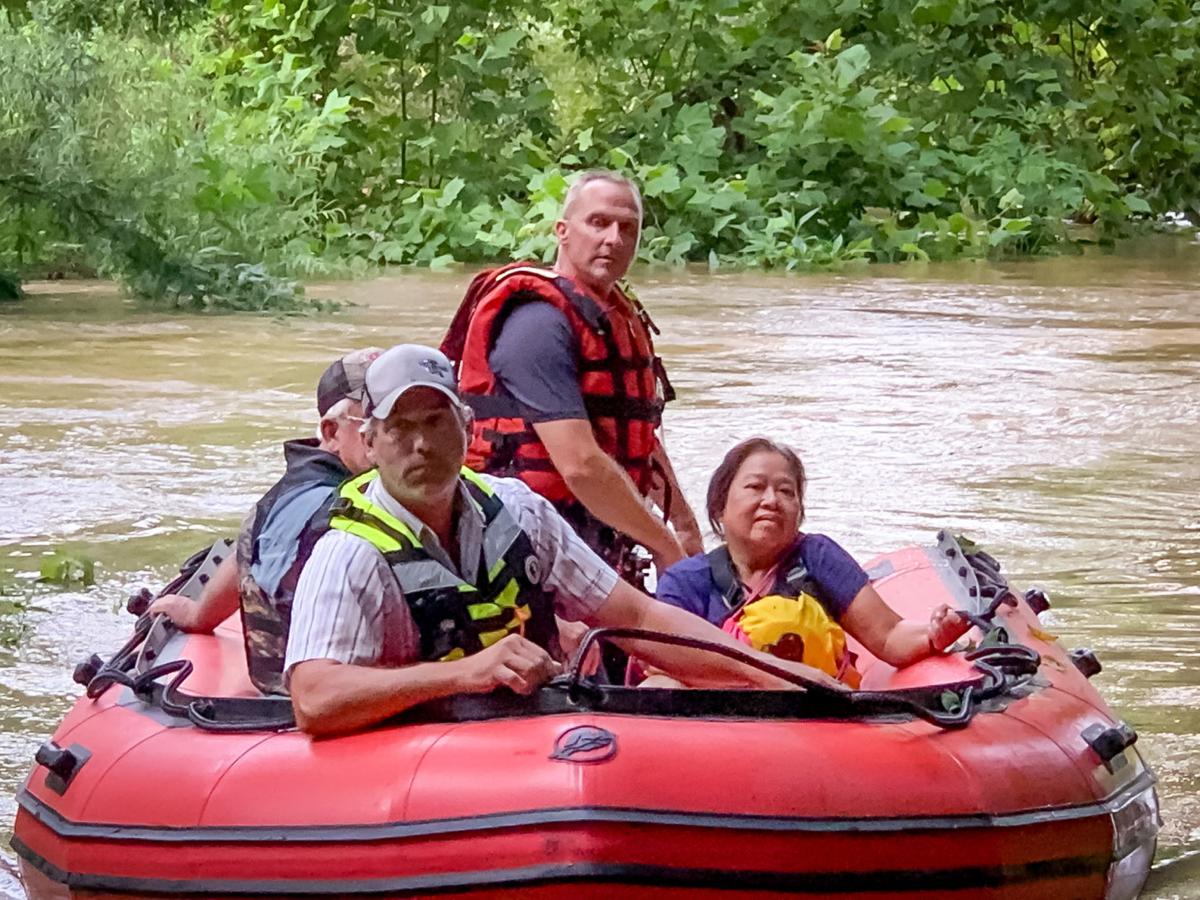 Flash flooding of the St. Francis River on Friday stranded two people on a gravel bar with no cellphone signal and in desperate need of a rescue crew in Madison County.

The couple had been out fishing earlier in the day and were caught off guard as the water levels came up to flood stage in a matter of 20-30 minutes.

"They drove down a path along the edge of the river, they were fishing," Madison County Emergency Management Director Dean Stevens said. "When the heavy rain they had got the day before in St. Francois County made its way down the river, it came up out of nowhere."

Stevens said the river quickly rose to flood stage, and the couple was stuck. He said they managed to move their truck up to the highest point possible waited for help.

"They didn't have any cell service," Stevens said. "They got lucky, and they could hear a local farmer on a tractor in a nearby field. They honked the horn of the truck and the gentleman had a shotgun and he shot it off a half a dozen times. He was able to get the farmer's attention."

Stevens said the farmer had to drive back up to his house in order to make the 911 call.

"Dispatch worked their tail off," Stevens said. "They managed to make contact with the caller and get a good location. The two individuals were on the St. Francis River at Shelton Ford.

"The gentleman, his wife wasn't from here, but he was from the Des Arc area and he understood the river and he said as soon as he saw it starting to get muddy he knew something was coming. They tried to get out but it was already too late. It wasn't anything they had done wrong. When they got there, the river looked fine."

Stevens said Missouri State Highway Patrol Marine Operation Trooper R.A. Walker was off work at his home when the call came through.

"He put himself on duty and came to the scene," Stevens said. "We got it done as quickly and safely as possible. It went smooth but it took every agency, dispatch, sheriff's deputies, fire department, and highway patrol."

Stevens said everyone did their job and did it well. He said Dispatcher Laura Marler helped narrow down the search area by gathering good information and using pictures to get the rescuers close. Marler got the crews within three quarters of a mile from the people and made it a quick search to locate them.

"After we had a general idea, then Madison County Sheriff's Deputy Jared Debrecht was the deputy on site, he did a great job running around and helping me figure out exactly where they were and find a spot to launch the boat," Stevens said. "The Cherokee Pass Volunteer Fire Department, myself and Chris Kennedy were out there, and then highway patrol (trooper) Walker with his boat and Todd Erpenbach (MSHP) was there to support on the side and got us in the water and going."

Stevens said the entire rescue response, from the time dispatch made contact with him to when the two people were safely rescued, took about two hours.

The Cherokee Pass Volunteer Fire Department had done some basic training in the past but this June it took it a step further when Stevens and Brad Reagan completed the swift-water rescue technician training.

"This is why we did the training," Stevens said. "We are a small community and it takes all of us. This was a multi-agency event that went really smooth. We all worked together and without the highway patrol's resources we would have been in a tough spot."

In an unrelated incident on Sunday, three young adults in their 20s were separated from their vehicle after Marble Creek experienced flash flooding.

"They were on the other side of the creek and they kind of didn't know what to do," Cherokee Pass Volunteer Fire Chief Bill Starkey said. "They were a little bit scared, because they didn't know how to get back across."

Starkey said crews were able to locate the three due to dispatch being able to retrieve the coordinates from their cell phone when they called 911. He said once they found them, crews were able to holler across the creek and give them directions to a nearby roadway.

"Then we went and got them," Starkey said. "We did not have to get in the water. It was not a water rescue. They just got separated from their car and could not get back. Another five or six hours it probably could have been."

Starkey said, just like the water rescue on Friday, the waters appeared to rise all at once. He said that is what happens with local flash floods.

"The main advice I can give is to pay attention to rain in areas upstream from where you plan to be," Starkey said. "The flash flooding at the St. Francis River came from storms the night before in St. Francois County and Farmington. The Marble Creek flash flooding was due to heavy rains in Iron County. It also takes a while for the water to get downriver. It may rain heavy through the night and it may not make it down until 10 or 11 in the morning."

In both instances the victims were safely recovered with no injuries.

Two injured in accident on US 67 in Jefferson County

Two area residents were injured in an accident on US 67 in Jefferson County on Thursday afternoon, according to a Missouri State Highway Patro…

The holiday weekend was marred by a fatal accident in St. Francois County Saturday evening, according to Missouri State Highway Patrol (MSHP) …

A Fredericktown man was airlifted to St. Louis after being seriously injured in an accident on County Road 504 on Tuesday night in Madison Cou…

The death last weekend of a Kansas City teenager underscores the dangers of the towering bluffs at Johnson's Shut-Ins State Park, a state park…

Farmington woman injured in accident on US 67 Saturday

A Farmington woman was seriously injured in an accident on US 67 on Saturday afternoon, according to a Missouri State Highway Patrol report.

A two-vehicle accident caused injuries for two motorists on Thursday in Washington County.

A Farmington man was seriously injured in a crash on Route F Sunday night.

Mississippi residents injured in accident on I-55

Two Mississippi residents were moderately injured in an accident with a dump truck on Interstate 55 on Wednesday afternoon in Ste. Genevieve C…

Madison County Emergency Management Director Dean Stevens gives a thumbs up as he and MSHP Cpl. R.A. Walker steer the rescue boat towards two individuals who became trapped on the St. Francis River on July 16, when flash flooding quickly brought the water levels up to flood stage.