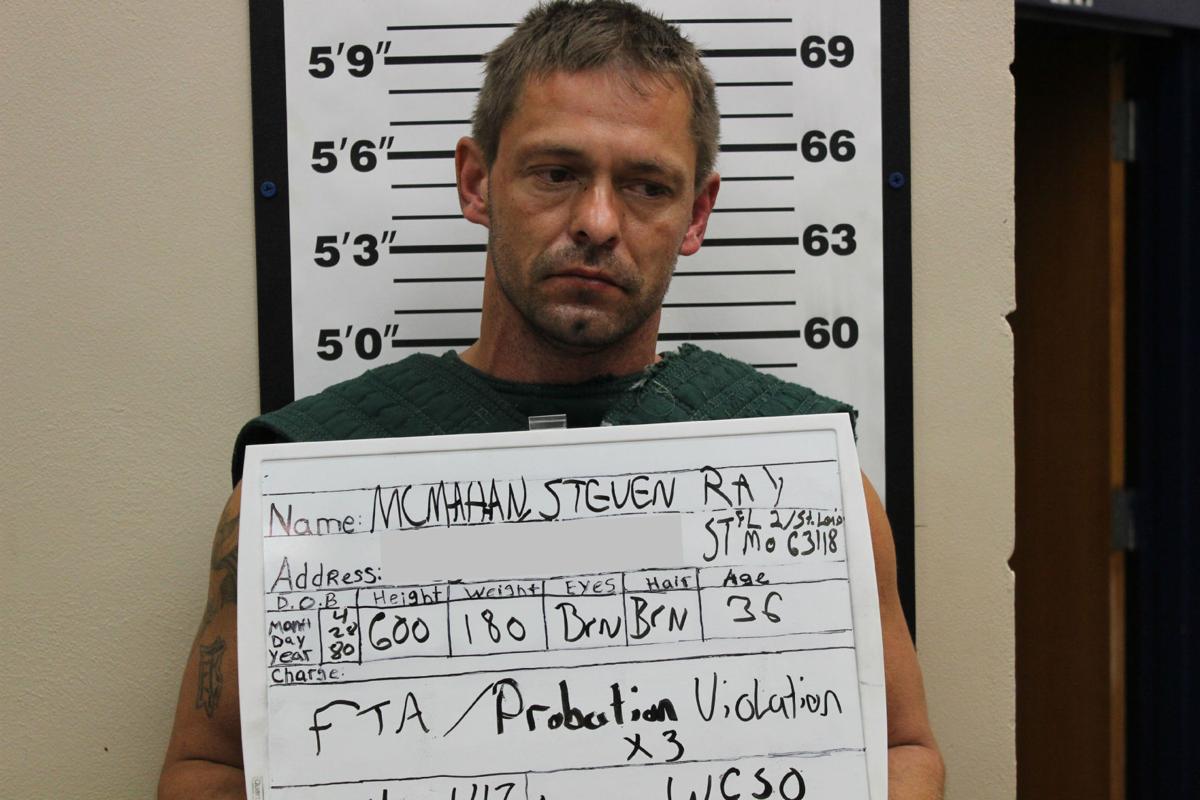 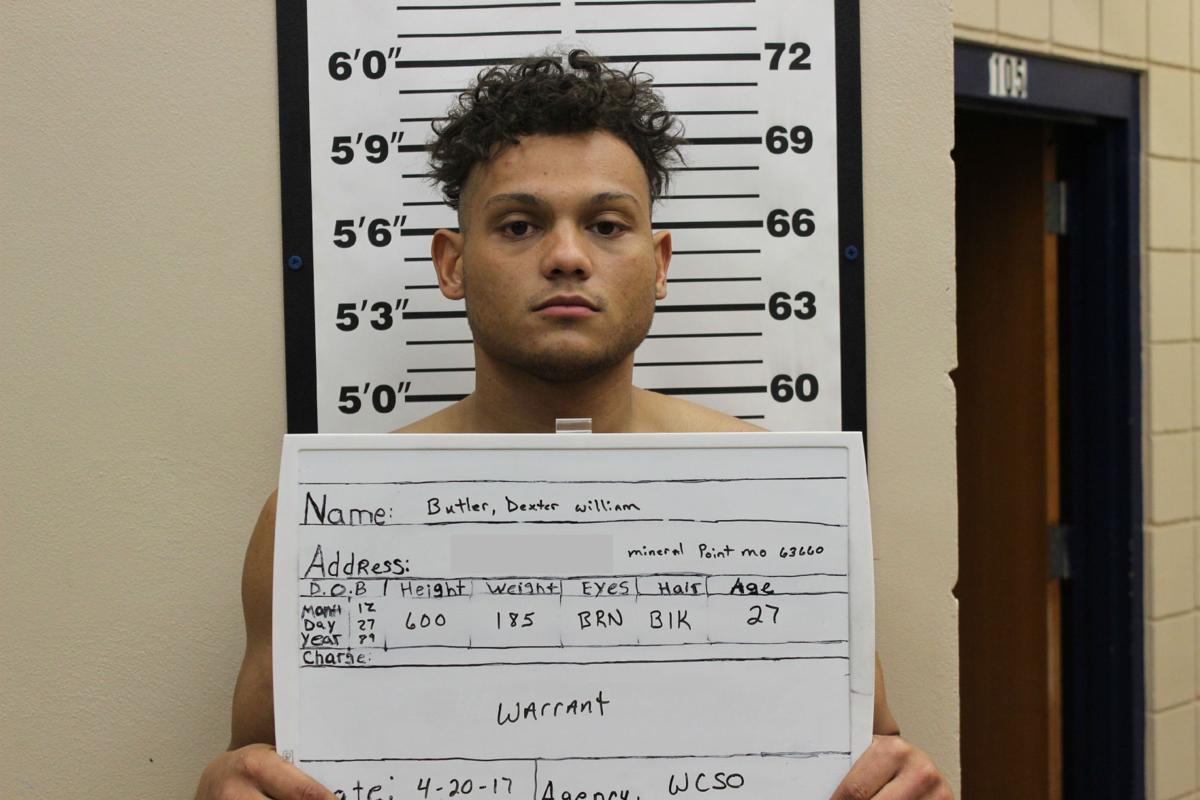 When Steven McMahan decided to make a run for it and escaped police custody from the hospital room he was in and headed across the field to the nearby Walmart, law enforcement was at a loss for any clothing description to give to searchers ... because, as the case was, McMahan had left all his clothes behind.

Formal charges have been filed against McMahan and another man involved in a pursuit and attempted assault on a sheriff’s deputy.

McMahan, 36, of De Soto, is charged with a class A felony of assault in the first degree-special victim, felony armed criminal action, driving while revoked/suspended, felony resisting arrest by fleeing, failure to stop for a stop sign, felony escape from custody while under arrest for a felony and sexual misconduct in the first degree.

While being fingerprinted Thursday evening in an attempt to confirm his identity while being checked out at Washington County Memorial Hospital in Potosi, McMahan slipped out the room and ran from the facility. With two officers in chase, the suspect sprinted across a field and bolted into the nearby Walmart store.

“There was a trooper and a deputy in the hospital room with this gentleman and we still didn’t know his true identity, so we were fingerprinting him with a mobile finger print device the highway patrol has,” explained Washington County Sheriff Zach Jacobsen. “They had their back turned to him in the room and he jumped out of the hospital bed.”

Jacobsen said McMahan ran from the hospital and through the parking lot. The deputy and the trooper ran after him as McMahan crossed the street and headed into the Walmart ... exposing himself to the workers and shoppers, including several children. He was apprehended moments later in the jewelry department.

“Charges were filed concerning the pursuit,” said Jacobsen. “The first person we arrested (McMahan) had three warrants and the second person, Dexter Butler, 27, of Mineral Point, has a parole warrant with no bond, so he is going straight to prison.”

Jacobsen said after they had arrested McMahan they had saturated the area looking for Butler, and officers saw a suspicious vehicle. It had two people in it and they followed it. They lost the passenger and it was believed Butler had ran from that vehicle as well - having already jumped and ran from a truck during a pursuit earlier in the day.

“Another detective in the same area located another suspicious vehicle a few minutes later and in that vehicle in the back, in the cargo area, they found Butler hiding under a pile of clothes,” said Jacobsen. “They are both secured in our jail, so no more running.”

The saga began Thursday afternoon when a police pursuit ensued in Washington County off Route E after a deputy attempted to pull over a truck.

Jacobsen said a deputy was on patrol eastbound on Route E when he saw a truck exit a salvage lot.

Jacobsen added the driver, later identified as McMahan, pulled the truck into another scrap yard right down the road and the deputy continued on and stopped in a driveway because he believed the driver was trying to avoid him.

“A few seconds later the vehicle traveled in his direction, east on Route E, and the deputy at that point activated his emergency equipment to conduct a traffic stop with the vehicle for the license violation,” explained Jacobsen. “The vehicle immediately fled and failed to yield and reached speeds up to 85-95 mph.”

Jacobsen said the truck went down Bell Fountain Road and then turned onto Cannon Mines Road. He added they then turned westbound on State Highway CC and upon reaching northbound Highway 21 the truck made a right to go northbound on Highway 21 and slid on the wet pavement.

“The vehicle spun out and lost control at the intersection, spun around and was facing southbound on Highway 21 in the northbound lane,” said Jacobsen. “The deputy stopped his patrol vehicle, placed it in park and was going to (approach) the driver.”

Jacobsen said the driver accelerated, striking the front of the deputy’s patrol car, and at that point both the McMahan and Butler jumped out of the truck and fled on foot.

According to a probable cause statement, the deputy ran after McMahan into the woods and after a short foot pursuit a struggle ensued while the deputy attempted to gain control. The deputy pulled out his Taser and fired it, striking McMahan in the middle back and administering the shock.

McMahan fell to the ground. He was secured in handcuffs and when asked his identity gave the officer a false name.

The sheriff said McMahan started exhibiting signs of a seizure after being taken into custody, so EMS was called to the scene immediately.

“They transported him to Washington County Memorial Hospital - accompanied by a deputy - for treatment,” said Jacobsen. He stressed there was minimal damage to the patrol car and it wasn’t a severe impact, but it was an intentional impact.

He added the policy when a deputy is involved in an accident is to have the Missouri State Highway Patrol handle the investigation.

Later in the afternoon Jacobson reported Butler had been found and taken into custody.

McMahan is being held in the Washington County Jail on a $125,000 bond, and Butler is being held for further questioning before being sent to prison and the filing of his new charges.

McMahan charged after burglaries at a church, Union Pacific facilities

An area man faces charges this week in two separate alleged burglaries at a church in northern St. Francois County and at Union Pacific facili…