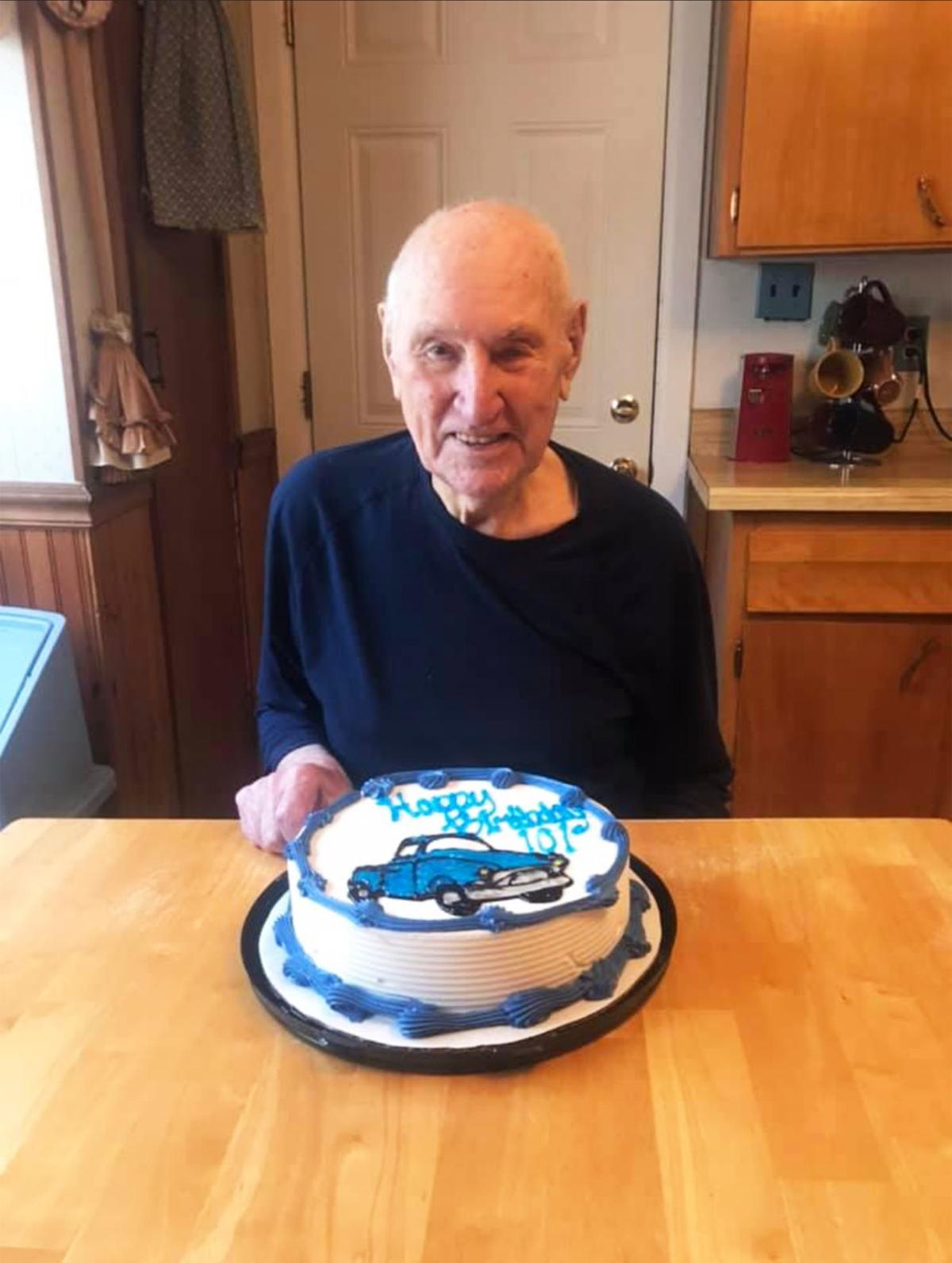 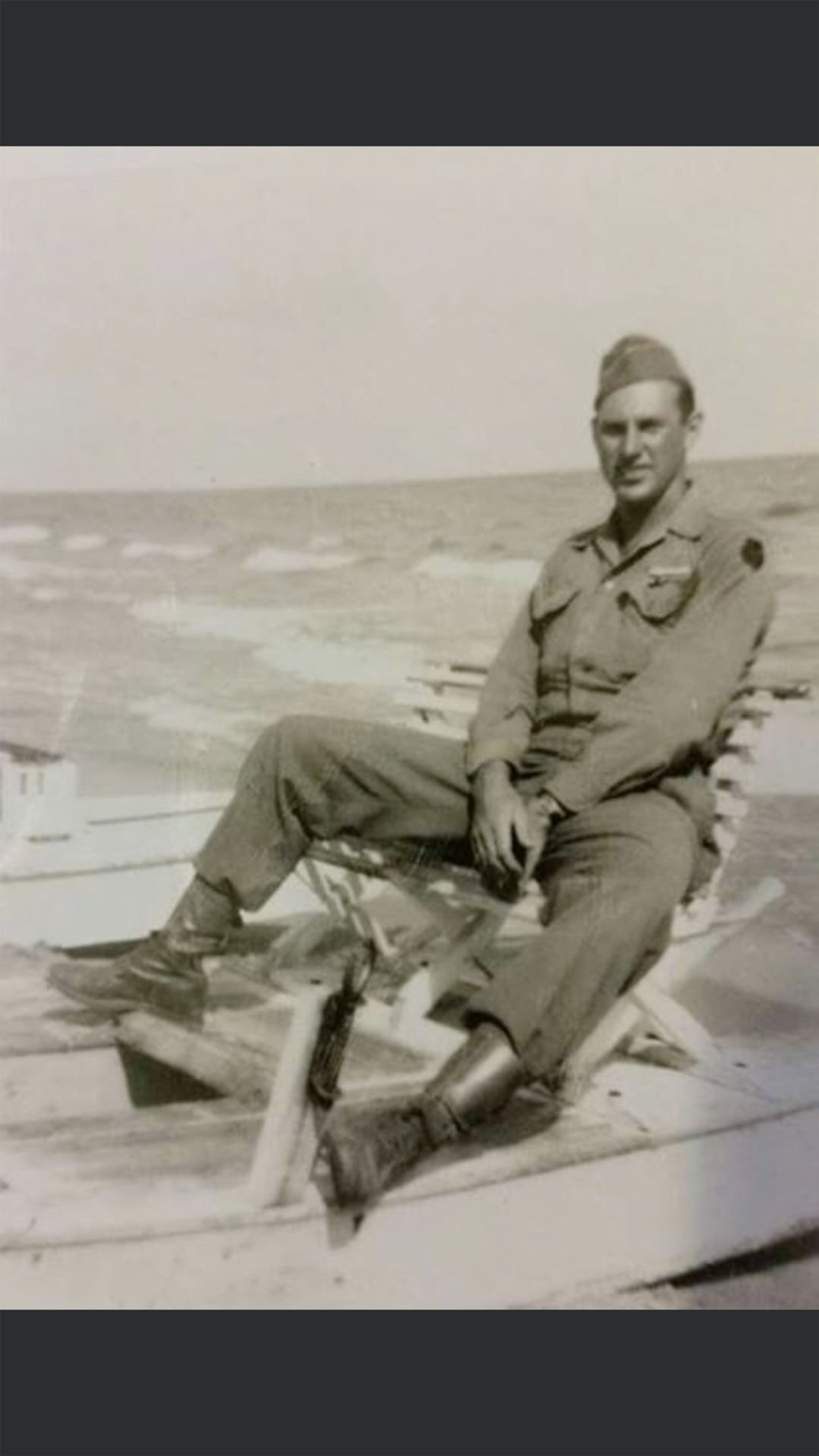 Pictured is Everett Kitchen serving in the Army during World War II. 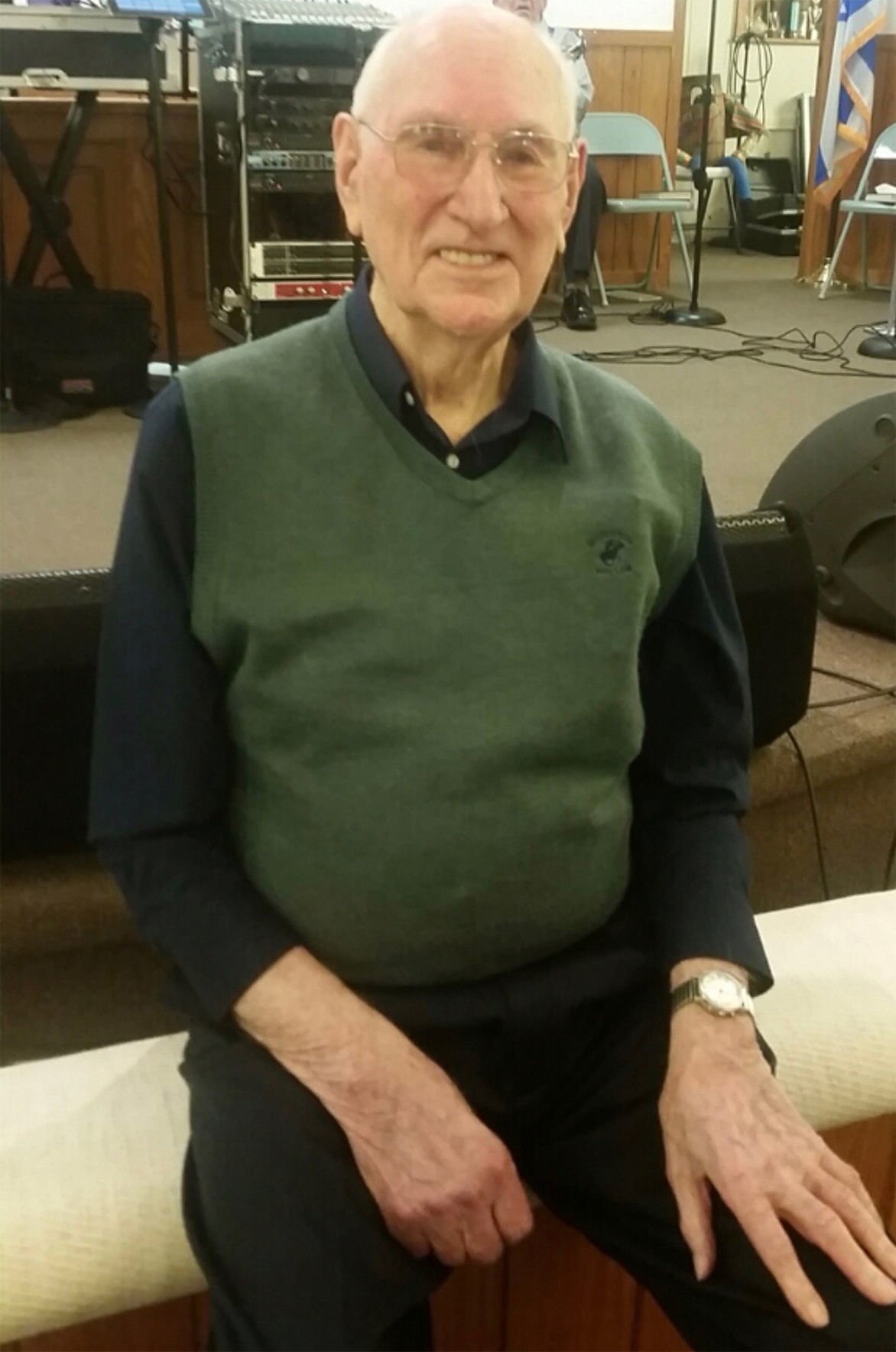 Everett Kitchen says one of the biggest changes in the world in his nearly 102 years here has been the computer. 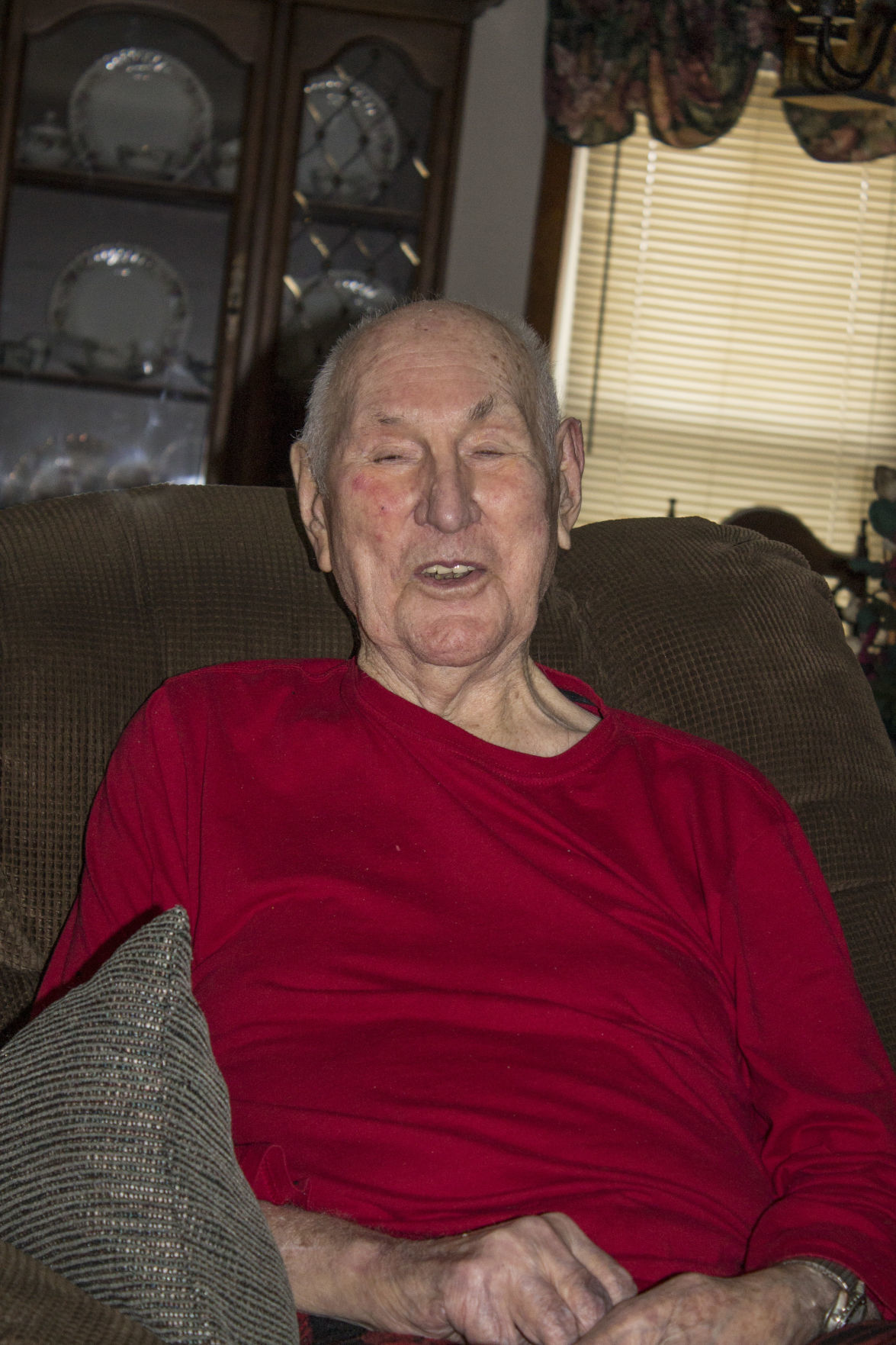 “Tiger Rag” by the Original Dixieland Jazz Band was a top pop hit.

The first daylight savings time in the U.S. went into effect, the U.S. Employment Service opened and the House of Representatives passed the amendment to allow women the right to vote.

Woodrow Wilson was U.S. President. World War I was happening. It was also the year of a flu pandemic, known as the “Spanish flu.”

It was 102 years ago when these events occurred, the same year when an area resident was born.

Everett Warren Kitchen was born on March 31, 1918, in Graniteville to parents Charley and Emma Kitchen.

As Kitchen celebrates his 102nd birthday this month, he only has one special request: to receive “a kind word.”

Kitchen’s family is asking people to make this happen for him by sending him a birthday card in time for his special day. Birthday cards should be mailed to PFC Everett Kitchen, 1590 Highway U, Ironton, MO 63650.

When asked what it means to be turning 102 this year, Kitchen said with a laugh, “It means I’m getting old!”

It was 76 years ago when Everett Kitchen began U.S. Army Basic Training in Camp Hood, Texas, in 1944. He had been drafted when the plan for D-Day started taking place. After that, he traveled to Fort Mead, Maryland, before heading to Ireland, Scotland, England and the Beaches of Normandy during World War II as an infantryman. From Normandy, he flew to France and traveled across Italy. He fought on the front lines.

He was discharged on Dec. 12, 1945. During his military service in World War II, he earned two bronze medals and a Silver Star.

“Whenever I was in the service, the war was over and they wanted me to sing and pick the guitar,” said Kitchen. “When the general walked in, I had to jump up and hurry up and fix my bed. He asked me where I was from and I told him Missouri. He asked me if I knew the song ‘Yellow Rose of Texas.’ I said, ‘Yes, sir,’ and he said, ‘Well, let’s hear it.’ I sang a few verses for him and told him I would sing the rest next time.

"They brought me in one day to pick my guitar for some of the lieutenants and generals. I played for President Eisenhower and General Patton.”

The day he returned home from his military service is one of the happiest moments of Kitchen’s life. Two other events he recalled as very memorable moments were when he “was converted” and when his first child was born.

Kitchen believes the secret to his longevity and good health over the years has been “serving the Lord because he’s not done with me yet.”

He served as an Assembly of God preacher for more than 50 years. His home church was in Pilot Knob.

Kitchen enjoys daily breakfasts that includes eggs, sausage, biscuits, hash browns and coffee on Mondays, Wednesdays and Fridays; cereal and milk and coffee on Tuesdays, Thursdays and Saturdays; and Sundays is a special day with donuts and coffee.

One of his favorite meals he looks forward to for dinner is fried chicken.

Kitchen said as a kid he threw horseshoes and played ball.

“We used to get a limb out of a tree and use our knife to whittle it to make a whistle,” he said.

He recalled one time when he was about 6 years old and the creek had risen. He and his siblings were playing in it. They put his little sister in a box for a boat ride and they ended up rescuing her out of the water.

Kitchen has seen many things happen in his nearly 102 years of life. He said the computer is probably the most important invention of his lifetime but “they have also ruined the world today.”

He has seen many changes in his lifetime, from the prices of products to school to how people communicate and do business.

“It used to be when you went into a business,” he said, “they appreciated your business. When I used to go in and pay my bill or trade at the store, they would give the kids a bag of candy. Nowadays, businesses don’t care if they have your business.”

Kitchen also said “schools no longer teach kids handwriting. I’m not sure how kids will survive in life without it!”

He offered some advice to the younger generation: “listen to your parents and get a good education.”

Kitchen said he’s been fortunate to do many things during his lifetime, including travel to Switzerland. There’s still one place he’s always wanted to see in person: Hawaii.

Although he’s slowed down “just a little,” Kitchen said his faith and family have kept him strong.

The Daily Journal staff wish Kitchen a very happy 102nd birthday and also express their sincerest appreciation for serving his country in the military.

Please send a birthday card to Everett for his 102nd birthday:

Two charged with murder after body found in Doe Run

Two area residents have been formally charged in St. Francois County after a sheriff’s deputy discovered the lifeless body of a Farmington man…

A woman accused of murdering her husband entered a guilty plea in Ste. Genevieve County Friday and learned she will spend the rest of her life…

The Farmington School District reported Wednesday afternoon that a staff member has been diagnosed with the COVID-19 virus.

Dano Duncan was a friend to most people he encountered, including us at the Daily Journal. RIP friend. Our thoughts and prayers go to his family.

Charges have been filed in connection with shots reportedly fired on Willow Creek Drive in Farmington earlier this week.

The St. Francois County Health Center reported on Wednesday night that the number of confirmed cases of COVID-19 in county residents has risen to 11.

With the advent of Gov. Mike Parson’s stay-at-home order starting Monday, two local sheriffs weighed in on how they plan to enforce the new or…

Pictured is Everett Kitchen serving in the Army during World War II.

Everett Kitchen says one of the biggest changes in the world in his nearly 102 years here has been the computer.