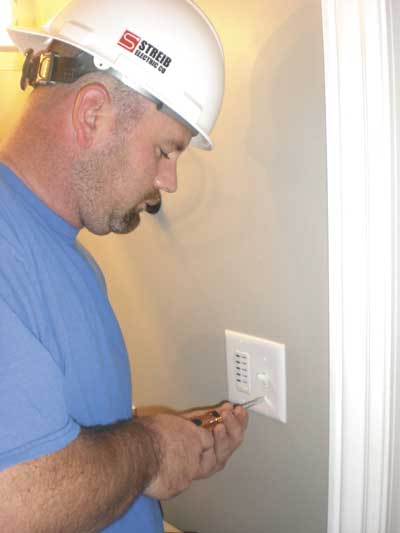 Farmington native Quentin Hassell is one of the electricians who donated their labor for the television show, "Extreme Makeover: Home Edition." The episode Hassell worked on airs Sunday night on ABC. - Photo submitted by Quentin Hassell 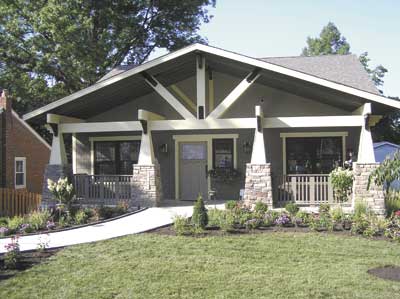 The new home of the Martirez family is the result of donated work by hundreds of tradesmen and volunteers, including an electrician from Farmington. The work was filmed by "Extreme Makeover: Home Edition." - Consolidated Construction Group photo 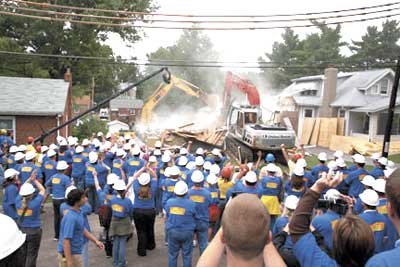 Workers on the "Extreme Makeover: Home Edition" watch a St. Louis area home being torn down so they can build a new one for the Martirez family. - Consolidated Construction Group photo
By PAULA BARR
Daily Journal Staff Writer

When actor Ty Pennington and his design team surprise the Martirez family of Shrewsbury on Sunday night’s episode of “Extreme Makeover: Home Edition,” a Farmington native will be among the volunteers waiting to build the family a new house.

Quentin Hassell was one of 32 electricians who volunteered their time on the project in September.

“The contractor that did the job, we do their electric work,” said Hassell, who works for Streib’s Electric. “We donated our time and Tom (Streib, owner of the company) sent the family the money he would have paid us for our time.”

The ABC show this season focuses on building new homes for local “heroes.” The weekly show films Pennington, a design team and hundreds of volunteers as they demolish an inadequate house and build a new one for a family.

This week’s episode, which airs at 7 p.m. on ABC, focuses on Dawn and Emmanuel Martirez and their three children. For this episode, the team also demolished a nearby coffee shop staffed by men and women with disabilities, then built a new store on the same site.

Dawn is a former pediatric cancer nurse who cared for terminally ill children. After twins Evan and Alec were born with disabilities (Evan has an extremely rare genetic condition called 9P minus, and Alec has another uncommon genetic disorder known as Crouzon Syndrome), Dawn had to stop working to care for her sons.

Evan has physical disabilities and mental retardation and Alec is profoundly hearing impaired. Both boys have skeletal abnormalities that require extensive corrective facial and cranial surgeries. As they get older, the original home's cramped, narrow hallways, steep stairs, crumbling driveway and single, handicapped-inaccessible bathroom posed many problems for them and slowed their development.

Pennington and designers Paige Hemmis, Ed Sanders, Eduardo Xol and John Littlefield were charged with designing a home that would accommodate the needs of the boys, their older sister Elle, and their parents.

The 2,000 square-foot new home was constructed with donated materials and donated time, said Hassell, who now lives in Villa Ridge. Although his company does a lot of charity work, it was the first time the employees had tackled a project like this, he added.

The electricians found out about the project a week before construction began, and did not receive blueprint plans until a day or two before filming began, Hassell said.

“Tom knew about it for a while, but he couldn’t let the cat out of the bag or the family would find out,” he explained.

The electric work itself wouldn’t be a challenge but the crew would have to do it much more quickly than usual. After the old house was demolished and the new one framed, plumbers, electricians, and other tradesmen headed inside to work.

“They gave us 10 hours to rough it in,” Hassell said. “We did it in six. Then we came back and hung all the light fixtures in four hours.”

The biggest challenge was working around the other tradesmen and volunteers. Work took place around the clock and projects were done at the same time.

“Everybody worked together at once, so you had to work around a couple hundred other people,” Hassell explained. “Wives and helpers were there, too, bringing around soda and food.”

“It was really fun,” Hassell said. “There were times we’d help if the carpenters were running late. The last thing you want is for the family to show up and the house not to be done.”

During construction and filming, the entire street was closed. Neighbors opened their doors to construction workers who needed to use the bathroom or wanted a drink of water.

Onlookers watched from 7 a.m. to 11 p.m. each day. Tornado sirens sounded and bad storms hit, but workers did not stop, Hassell said.

Workers did not see much of Pennington, who was pretty reclusive, Hassell said. They each received a blue “Extreme Makeover” T-shirt and participated in the traditional group run to the home.

“What they do is, they film you running down the street and there’s two or three takes on everything,” Hassell said. “It took three to four hours to film all that.”

“It makes you feel really good when you realize you have a skill that can help someone, especially these two little boys,” Hassell recalled. “The mom and dad — it was pretty emotional for everybody there. There were tears on everybody’s face.”

Seeing how happy the family was made his work worthwhile, Hassell added. He said the experience made him thankful for what he has, and he urges others to seize similar opportunities.

“If you do have a skill to offer, use it to help other people,” he suggested.

COVID-19 cases are on the rise in St. Francois County.

Couple saved from flash flooding on the St. Francis River

Flash flooding of the St. Francis River on Friday stranded two people on a gravel bar with no cellphone signal and in desperate need of a resc…

Farmington native Quentin Hassell is one of the electricians who donated their labor for the television show, "Extreme Makeover: Home Edition." The episode Hassell worked on airs Sunday night on ABC. - Photo submitted by Quentin Hassell

The new home of the Martirez family is the result of donated work by hundreds of tradesmen and volunteers, including an electrician from Farmington. The work was filmed by "Extreme Makeover: Home Edition." - Consolidated Construction Group photo

Workers on the "Extreme Makeover: Home Edition" watch a St. Louis area home being torn down so they can build a new one for the Martirez family. - Consolidated Construction Group photo
© Copyright 2021 Daily Journal Online, 1513 St. Joe Drive, PO Box 9, Park Hills, MO | Terms of Use | Privacy Policy
Powered by BLOX Content Management System from TownNews.com.
You don't have any notifications.