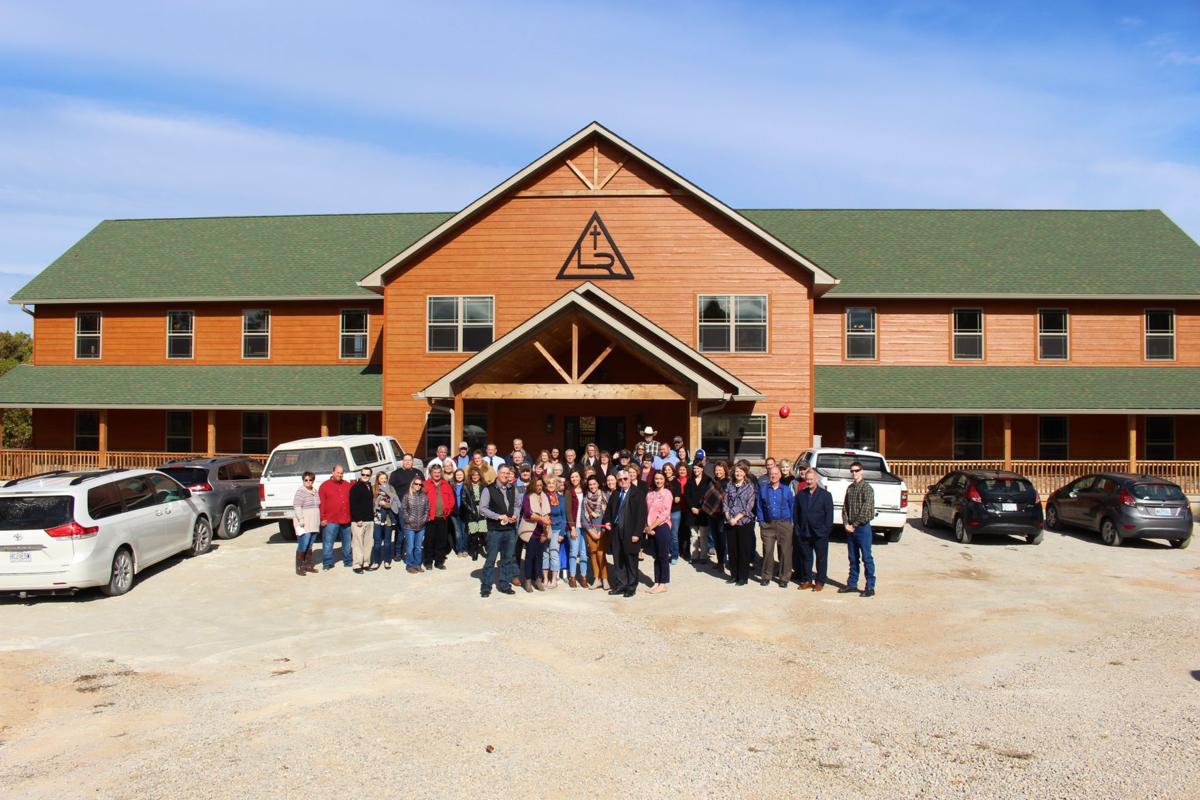 An open house and ribbon cutting was held Oct. 27 at the brand new Legacy Ranch in rural Bonne Terre that will soon be home to 30 boys who will live in the more than 13,000 square foot structure. There are five living wings that each include six single bedrooms, two bathrooms, a living room and kitchenette. 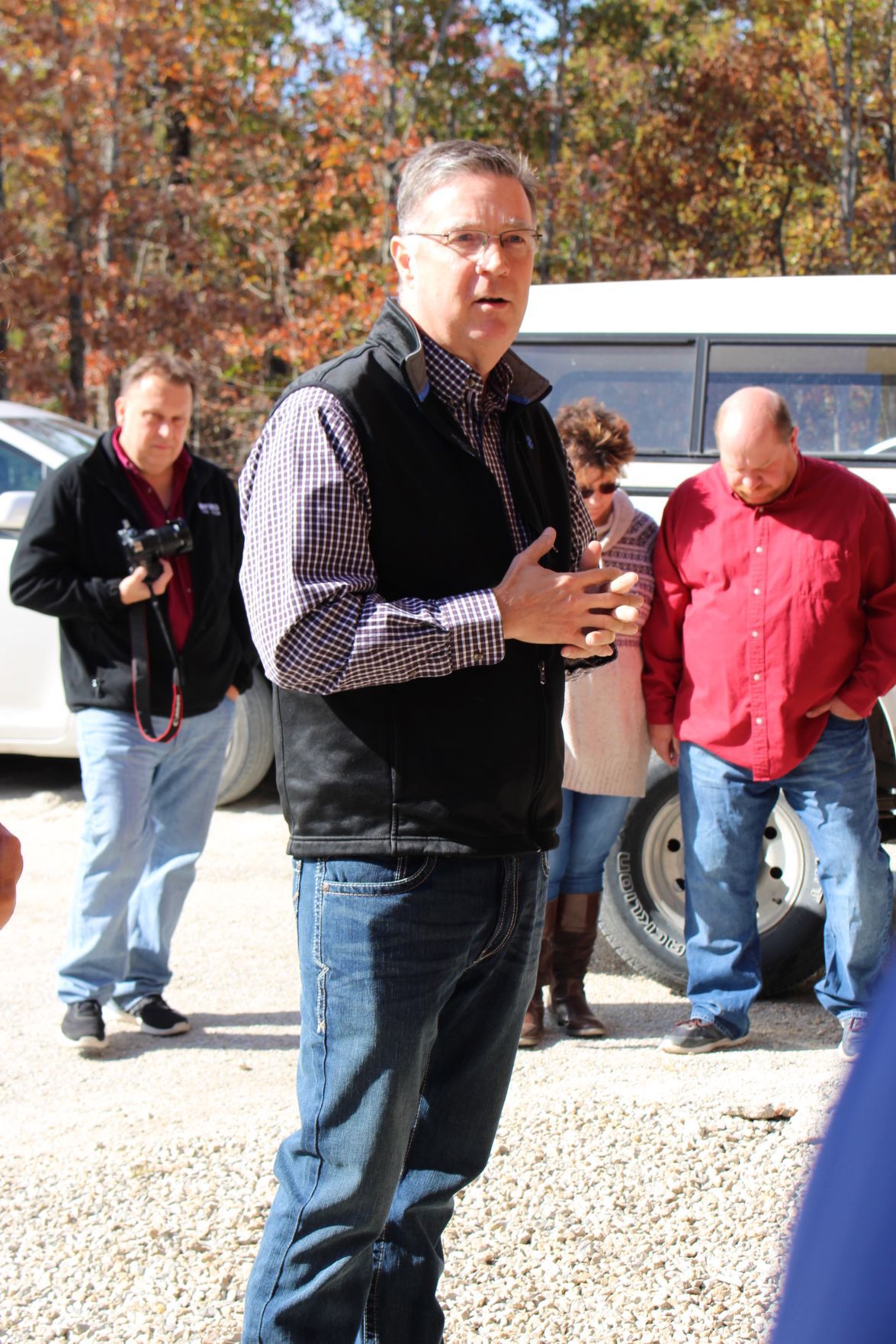 Lennie Fincher addresses the crowd in attendance on a cold Friday morning prior to leading them in prayer. Although Fincher is a pastor and the ranch is faith-based, he said they don't want any of the boys in their care to feel like Christianity is being "pushed down their throats." 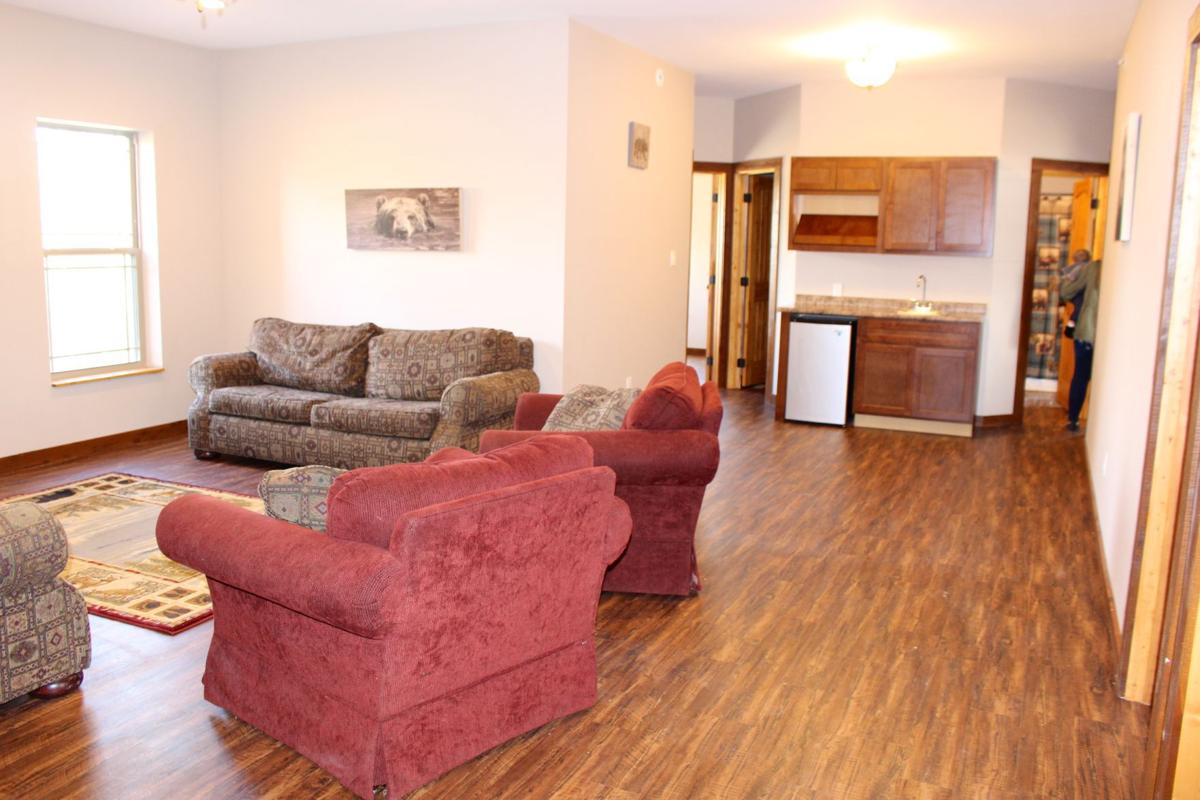 A boys ranch planned and constructed to meet the emotional, physical, social and spiritual needs of displaced boys will soon be providing a loving and nurturing environment in which 30 young men can live.

The Legacy Ranch, located at 12729 Stoney Point Road in rural Bonne Terre, held an open house and ribbon cutting last week as work neared completion and the first group of boys were expected to arrive onsite in the coming weeks.

The open house held Oct. 27 at Legacy Ranch was the fulfillment of a dream of its owners, Lennie and Nicole Fincher, to provide a place where wounded boys can become confident young men.

“We’ve been married for 25 years and it was one of those things where we had said that if we ever had enough money to do something like that, we would build a place for kids that didn’t have a home,” said Lennie Fincher, who is pastor of the Missing Peace Church in Park Hills.

“We had our own kids and jobs and things like that,” he said. “Life just kinda got us sidetracked. We talked about it over the years, but we never really thought we would have the financial ability to do it.”

Then, about four years ago, Lennie’s father became ill.

“My parents own the property and they came to us at Thanksgiving that year and said, ‘We feel like God gave us this land to be used for some sort of a ministry, but at that point in their life they knew it wasn’t really going to be them,” Lennie said. “They came to me really because they thought that I might possibly know another minister that might be able to use it for something.

“They asked if I knew of any ministries that might be able to use the land for something. They couldn’t afford to just give it away, but they would let it go for what they owed against it. I didn’t have to think about it and get back to them. I said, ‘Well, if I had it, this is what I’d do.’ They were like, ‘Wow! Where did that come from?’ That got us thinking that this might just work.”

The couple used the equity in the land to purchase the acreage and then began working with a bank to work out the financing.

“We were still short some money, but through the SEED$ (Southeast Economic Development Fund) program, we were able to come up with that final piece of the puzzle to put the deal together and make everything work,” he said. “We just feel that God’s opened the doors for us to be able to do it and we didn’t want to do anything that wasn’t top-notch.

“We visited other homes in the past and we’ve seen some places that have been described — even by people that work in Children’s Division — as children warehouses. So, we wanted to create a home that the kids would actually not be embarrassed to be a part of.”

Nicole interjected, “We want them to feel at home — not like they’re in a home.”

It’s immediately obvious that the Finchers didn’t cut any corners in the facility’s construction.

Each of the three floors measure out at 4,400 square feet, which means the entire building totals a little more than 13,000 square feet. It consists of five living wings, each composed of six single bedrooms, two bathrooms, a living room and a kitchenette.

“We did the kitchenettes so that the kids would have access to healthy snacks whenever they wanted them and didn’t have to go to the kitchen because it will have to remain locked when not in use,” Nicole said. “One thing we’ve been told over and over is that a lot of these kids come in and they’ve been starved and they’ve not had proper nutrition, so we want to be able to provide that for them.

“We felt that doing the separate living wings would create kind of a family unit. We will separate them by both age and personality. If a kid’s not getting along with another kid, we might be able to do some maneuvering to help them work together as a family.

“The dining room is large enough to seat all 30 boys at one time so we can dine together. There’s a recreation area in the basement where we set up the ping pong table this weekend. We’ll be getting some other game tables so they will have a place to play board games, do puzzles and things like that.

“The kitchen is very large with commercial grade equipment and we have a group therapy room where they can all gather together and do some group therapy and we’ll have the counselor’s office where he will be able to do individual counseling and family counseling. We really want to encourage the families to come in and receive counseling as well, so if the child is able to go back home, they are going back to a stable environment.”

Asked about staffing at the ranch, Lennie said, “Dr. Raymond Fabing, LPC, of Bridge of Hope Ministries, has helped us coordinate with a team of therapists. Pastor Gary Selbert, LPC, is going to be our program director. He’ll be working closely with Dr. Fabing who will provide some, but not all, of the therapy. It’s just that Dr. Fabing has so much on his plate with his ministry, he just doesn’t have enough time to do both. David Wilkinson is going to be our direct care staff supervisor. He will be hiring and training, as well as taking care of scheduling for all the people who work on our direct care staff.”

Lennie feels like the ranch put together a “dream team” to work with the boys.

“These are people who have already done this for other homes,” he said. “Even though my wife and I haven’t had experience in this type of a thing, everyone that we are working with has. Even a lot of the direct care staff that’s going to be coming on board have past experience with other children’s homes.

“This is going to be a low-level facility, which means we can target kids that are in the system, not because of anything that they’ve done, but because of family situations. Either their parents are incarcerated or the boys have been removed from the home for their safety.”

Nicole said, “We want them to feel safe.”

As far as spiritual growth, Lennie said there will be church services offered at the ranch and that many of the staff are pastors, hold other ministry positions or are heavily involved in their local church.

“There will be many opportunities for that,” he said. “It’s written into our bylaws that we are a faith-based organization, but we don’t want any kid to feel like it’s being pushed down their throat either. We feel like if we don’t treat them wholly — spirit, soul and body — that they’re going to be missing something in life and that’s probably a lot of what got their families in the position they’re in now.”

Nicole added, “Our goal when they step foot on the property is that they will feel God’s presence. They may not understand it, but that they’ll feel his love and that they’ll know that there are people who truly care about them and want to help them.”

As of last week, Legacy Ranch’s license was still pending while several documents are being finalized. The Finchers were expecting the first boys to arrive within the following two weeks.

“Once we get the OK from our licensing agent, then we have some training that we have to do with our staff before they can actually work with kids. We definitely believe we’re going to have kids here before Thanksgiving.”

Some might be wondering why the Finchers decided to call their boys home thr Legacy Ranch and Lennie is quick to answer when asked.

“We named it that because so many kids out there have not had a strong role model in their life,” he said. “Everybody’s going to leave a legacy. I think that our society is reflective of the fact that there’s not been strong role models, so we wanted to give every boy that comes there the opportunity to change the legacy that they’re going to leave. Hopefully, this will change many things for them and their future generations to break the cycles that they’ve been raised in.”

“We want them to feel at home — not like they’re in a home.” — Nicole Fincher, Legacy Ranch co-owner

An open house and ribbon cutting was held Oct. 27 at the brand new Legacy Ranch in rural Bonne Terre that will soon be home to 30 boys who will live in the more than 13,000 square foot structure. There are five living wings that each include six single bedrooms, two bathrooms, a living room and kitchenette.

Lennie Fincher addresses the crowd in attendance on a cold Friday morning prior to leading them in prayer. Although Fincher is a pastor and the ranch is faith-based, he said they don't want any of the boys in their care to feel like Christianity is being "pushed down their throats."