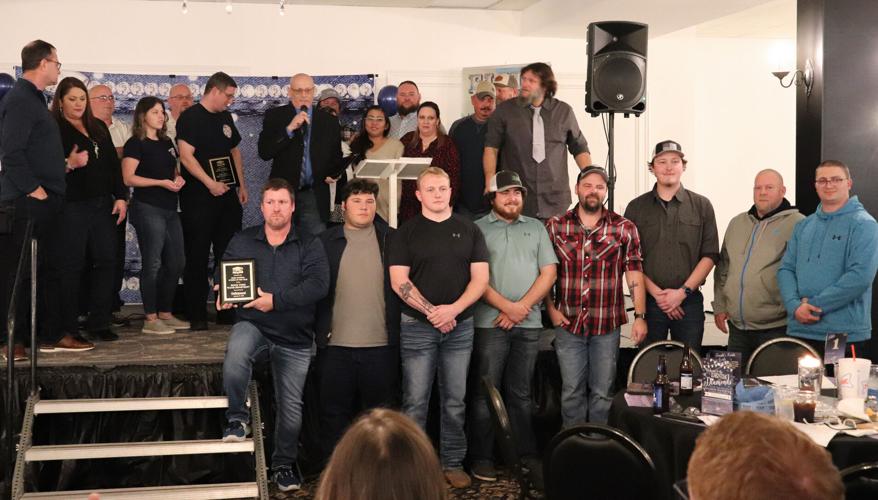 Personnel from the Park Hills utilities, fire departments, and the Bonne Water Department meet on stage at the Park Hills-Leadington Chamber of Commerce Awards Banquet Saturday night. The three departments received the Daily Journal's annual Citizen of the Year Award at this year's ceremony in Leadington. 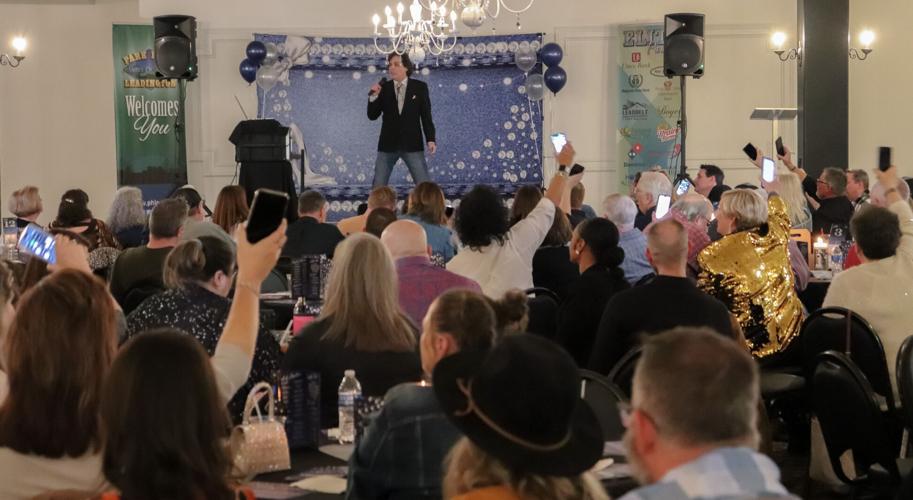 Conner Lorre has everyone singing "Sweet Caroline" as he delivers his renowned vocal impressions of Neil Diamond as well as other iconic musical acts at this year's Park Hills-Leadington Chamber of Commerce awards banquet in Leadington Saturday night.

The Park Hills-Leadington Chamber of Commerce held its annual awards banquet Saturday evening at the White Magnolia Banquet Hall in Leadington, where several were honored for their positive community contributions. This year, the Daily Journal presented its annual Citizen of the Year Award to the Park Hills utilities, fire departments, and the Bonne Terre Water Department for their crucial and often unseen efforts.

Saturday night’s stage was overflowing with the many men and women of the three departments as Daily Journal Advertising Director Michelle Menley announced this year’s Citizens of the Year. Typically, the Daily Journal presents the award to one recipient but this year decided to recognize the tireless, round-the-clock work done by the city departments— Specifically, their work restoring water to Park Hills on and around Christmas Eve in sub-zero temperatures.

Before handing out the awards, Menley said, just before Christmas Eve, multiple water main breaks led to a desperate situation in the city.

“On Dec. 23, the Park Hills Water Department was dealing with a 2-inch water main break on High Street near the school when they were notified of a 6-inch break on Large Street,” she said. “Soon after, there was a 4-inch break on Main Street. And at about 1 a.m. Christmas Eve, they were called to a 12-inch main that blew on Rivermines.”

Utilities Director Frank Shovlin said it was a domino effect and everything was against them.

Rotating water and sewer employees worked all day in temperatures of -30 F to fix the water issues. By Christmas Eve evening, the workers were too exhausted to continue as they were. Shovlin called Bonne Terre City Administrator Shawn Kay for help at about 7 p.m. Within a half hour, four Bonne Terre Water workers showed up to assist.

As if dealing with main breaks in the cold and responding to residents with frozen pipes wasn’t challenging enough, the department had a motor fail on a filter feed pump at the water plant.

Shovlin said he remembered being told they had 20,000 gallons of water left, which meant they had about two hours before the city ran out of water. He had to think outside the box and came up with borrowing the city’s fire pumper to pump water from the reservoir to the filtration system.

For three long days, the fire department’s pumpers kept the city’s water flowing until the equipment at the water plant was restored.

Shovlin said they would not have made it through the water emergency without the joint efforts of the fire department, all the city’s utility workers, and the four workers from Bonne Terre.

The first accolade for lifetime achievement went to Bob Gerig, who has excelled in many different positions throughout the years but most recently retired from Belgrade State Bank. Rev. Eddie Bone, the pastor of First United Methodist Church, presented the award to Gerig, describing him as one of his “absolute best friends.”

Bone detailed Gerig’s impressive professional career, from delivering Daily Journal newspapers as a boy to eventually reporting for the paper and later moving on to leadership positions at multiple broadcast news stations. Gerig went to work as a marketing director for Belgrade State Bank in 2007 and served more than 15 years with the company before retiring last year.

Retirement hasn’t stopped Gerig from serving the community in various leadership roles, including board positions with several organizations and committees.

The other Lifetime Achievement Award was given to Kevin and Lori Ball of Kevin Ball Auto Body.

The award was presented to the couple by Bob Monks, who recounted the journey their business has taken in the last three decades to become the success it is today. He mentioned the generosity the Balls have shown along the way.

“Throughout the years, they’ve secretly helped countless employees, customers, and local residents and never wanted any recognition for their acts of kindness,” said Monks. “They’ve been active on numerous boards, committees, and charities in our community. They’ve been the recipients of multiple community awards and public recognition, but none of this is taken away from their main focus, which was building the business that serves their local community to the absolute best of their ability.”

Conley noted that in Pierre’s relatively short time in her position, she has been instrumental in driving growth in many ways, including her efforts to beautify the city and her organization of new community events like Christmas in Our Hometown.

Thomas “Docc” Nutter, one of the chamber’s directors, handed out the chamber’s Ambassador of the Year. This year’s winner was Yvette Smith, with more than 130 chamber points. The ambassadors receive points throughout the year for their service at chamber events and meetings.

The St. Francois County Rotary Club’s Service Above Self Award recipient was the chamber’s Executive Director, Tammi Coleman. Intermediate Past President Brenda Jordan took the stage to present the award but tricked the crowd into believing Dr. Joe Gilgour of Mineral Area College had won the accolade. Gilgour came to the stage only to reveal the ruse and announce Coleman as the winner.

Personnel from the Park Hills utilities, fire departments, and the Bonne Water Department meet on stage at the Park Hills-Leadington Chamber of Commerce Awards Banquet Saturday night. The three departments received the Daily Journal's annual Citizen of the Year Award at this year's ceremony in Leadington.

Conner Lorre has everyone singing "Sweet Caroline" as he delivers his renowned vocal impressions of Neil Diamond as well as other iconic musical acts at this year's Park Hills-Leadington Chamber of Commerce awards banquet in Leadington Saturday night.