Olympics live: Simone Biles pulls out and other updates from Tokyo 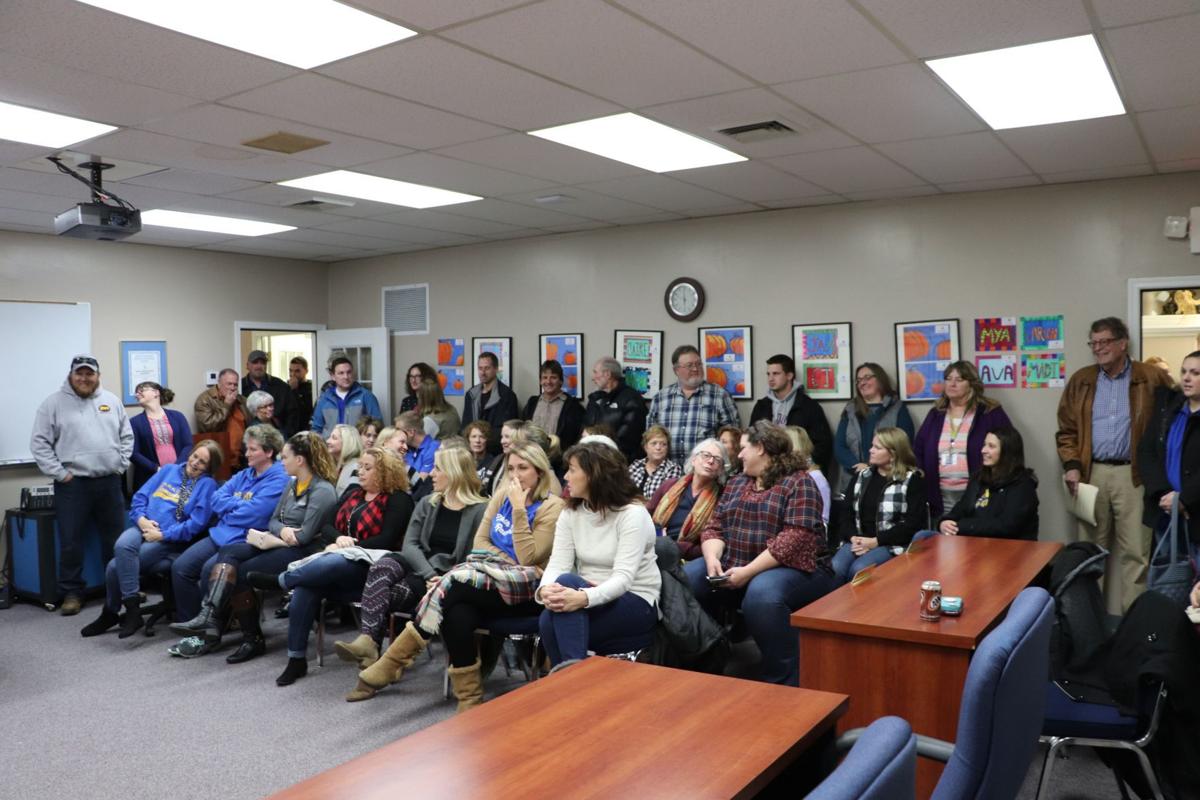 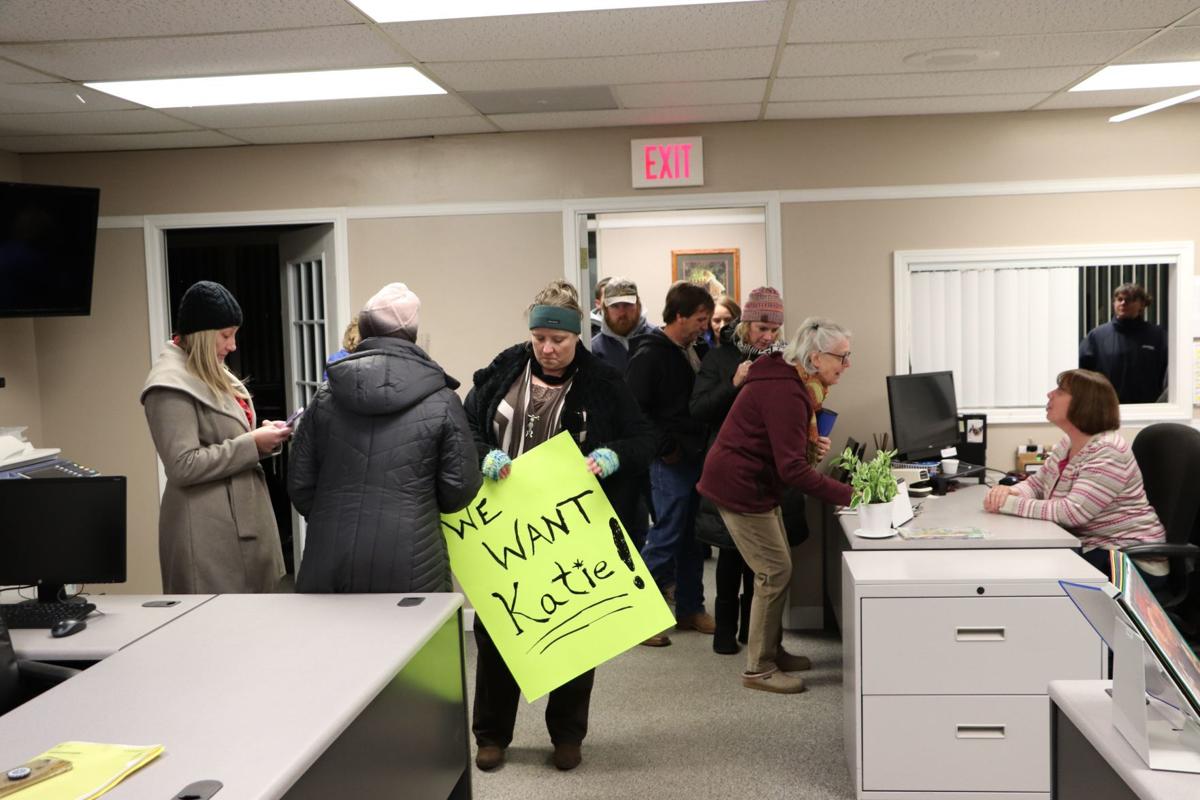 One community member in support of Associate Superintendent Katie Bockman for superintendent brings a large sign to the Monday board of education meeting.

A special session is now scheduled this Monday evening at 6 p.m. to approve a contract for the position of superintendent, which will be effective July 1.

A large crowd turned out last Monday evening to meet with the North County Board of Education for a second time in regard to selecting a candidate for the superintendent position. Superintendent Dr. Yancy Poorman is retiring at the end of the school year.

After hearing from members of the crowd in closed session, the board selected Nicholle Ruess for the position. Ruess had once been an elementary school principal at North County and is currently an assistant superintendent at Festus.

A motion was made by Jerry Reed and seconded by Ted Eaton to offer a contract for the position of superintendent to Ruess. A roll call vote was taken and board members in favor of the motion were Kasey Jenkins, Shelley Tracy, Donna Hickman, Reed and Eaton. Board members against the motion were Dave Mallow and Shane Claywell.

Prior to the board’s final decision, the crowd of people had gathered into the board room. After the Pledge of Allegiance everyone was asked to step outside. A speaker from each group was chosen to speak on behalf of their group, one to represent the community and another to represent the district employees.

Each group was brought back into the room separately to speak in closed session.

North County Teacher and North County Chapter of the National Education Association President Jeff Grapperhaus was the chosen speaker to represent the district employees and he said he knew the board had heard from many of their constituents concerning the position.

“I also know many have shared their opinions and who they believe should fill the leadership position,” Grapperhaus said. “My goal tonight is to share the major points coming from members of the staff. As I stated in my previous recommendation, Ms. Katie Bockman is the most qualified candidate to fill this position.”

Grapperhaus explained Bockman has been an employee of the district for the last 13 years and has participated in nearly every aspect of district business. He said she has been both a building administrator and assistant superintendent, with experience in overseeing both student services and human resources.

“These positions have provided her with valuable experience in teacher evaluations, transportation, employment, curriculum, student instruction and assessment, public relations and many other facets of the district,” Grapperhaus said. “Through her hard work and effort, Bockman has been successful in each of these positions, which resulted in the board awarding her promotions in the past.”

Grapperhaus said he has been with the district for 10 years and has never experienced another time when a large number of staff have come out is such large numbers to support one of their own. He stressed that choosing Bockman for the position will demonstrate to the staff the school board values and rewards an employee’s contributions to the school.

“In the past, the district has classified staff promoted to teachers, teachers to principals, and principals promoted to superintendents,” Grapperhaus explained. “By selecting an outside candidate, one who used to work here and then chose to leave, you are sending a message to the staff that loyalty and commitment to the district is not valued.”

Grapperhaus also stressed that they wanted to share their disappointment in the selection process the board had chosen to follow to fill the position of superintendent.

“In our opinion, the board has been very secretive and isolated throughout this selection process,” Grapperhaus said. “We feel that both the employees of this district and community members were shut out from participating in the selection process. At no point were the ideas, opinions and viewpoints of stakeholders sought by the board for consideration.”

Grapperhaus said instead, in order to make themselves heard, stakeholders had to personally contact each board member directly to ask to speak to them in closed session. He said many of them do not feel the board values their experience, ideas or opinions.

“By having a more inclusive hiring process, employees would feel they had a seat at the table and that the board values their input,” Grapperhaus said. “Board Policy 0342 states ‘Members of the Board of Education will conduct themselves in a manner that complies not only with the letter of conflict of interest laws, but also in the spirit of those provisions. Board members will at all times make good faith efforts to avoid the appearance of a conflict of interest.”

Grapperhaus said he believes most of the board is aware of the friendship that exist between the out-of-district candidate and some members of the school board. He stressed that though these friendships may not break the letter if the law, they believe they violate the spirit in which these laws were written.

“Speaking for myself, I know it would be a difficult to be a member of the selection team and objectively evaluate the ability of a close family friend to fill a position,” Grapperhaus said. “Questions have arisen concerning the eligibility and ability of the board preferred outside candidate to fulfill the duties required of a superintendent.”

Grapperhaus explained the original posting for the position listed the preferred experience level of three to five years in the Central Office and in the past that meant experience as an assistant or head superintendent.

“Sources indicate the outside candidate does not meet that requirement … and we, as employees of the district, spoke with some of our counterparts in the Festus School District, where the out-of-district candidate is from and received less than thrilling news.”

Grapperhaus said it was for those reasons they were asking the board to halt the selection process and form an advisory committee made up of employees and community leaders.

Julie Pratte was selected to speak on behalf of the community and she said she was there to voice the many opinions from their community. She presented each board member with a packet containing 34 letters of support from the community, along with 13 signed petitions from staff, tax payers and community members and leaders they were able to compile in a short time.

“The show of support for Bockman is quite frankly overwhelming,” Pratte said. “She has the knowledge and skills she has developed at each stage of her career … and that is why the community is rallying for her. She has a passion for the under-served student and is able to master the details of any operation without losing the big picture or forgetting that there is no reason to do anything in education if it does not benefit the children.”

Board President Kasey Jenkins declined comment earlier in the week and could not be reached Friday for information on the upcoming meeting.

Watch as an insane sandstorm engulfs a Chinese city

Couple saved from flash flooding on the St. Francis River

Flash flooding of the St. Francis River on Friday stranded two people on a gravel bar with no cellphone signal and in desperate need of a resc…

Two pedestrians injured on I-55 in Ste. Gen County Sunday

Two pedestrians were struck by a vehicle on Interstate 55 in Ste. Genevieve County this weekend.

One community member in support of Associate Superintendent Katie Bockman for superintendent brings a large sign to the Monday board of education meeting.