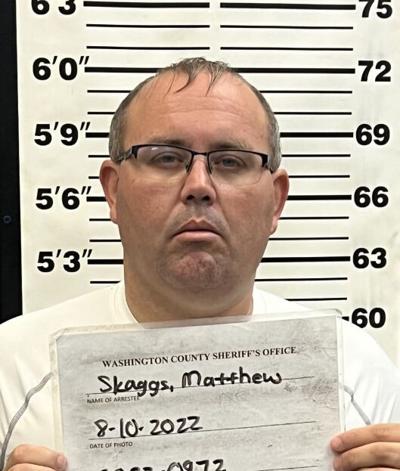 An area law enforcement officer is charged with sodomy and enticement of a child after allegedly having sexual contact with a juvenile while working for the Potosi Police Department. The officer, who has resigned from law enforcement, is also alleged to have provided the boy with vaping products in exchange for illicit photos via Snapchat.

Matthew Skaggs, 39, of Potosi, has been charged in Washington County with statutory sodomy - deviate sexual intercourse - person less than 14 years of age, enticement of a child (actor 21 years of age or older and child less than 15 years of age), and first-degree endangering the welfare of a child creating a substantial risk.

According to a probable cause statement, on Tuesday, at about 8:44 p.m., members of the Missouri State Highway Patrol (MSHP) Division of Drug and Crime Control were contacted by Potosi Police Chief Michael Gum regarding a complaint he received about one of his officers.

The chief reportedly informed the MSHP that an area mother said she had located some vape cartridges in her son's room, and when she questioned him, he told her that Potosi Police Officer Matt Skaggs had given him the cartridges. The mother told Gum that she asked her son further about it, and he said Skaggs had been supplying him with vape cartridges and Delta 8 (THC) cartridges for several months.

The report states the boy's mother also told the chief that her son said he had sent Skaggs pictures and videos of himself performing a sexual act as payment for the cartridges. Gum informed investigators that Skaggs was currently in Jefferson City for training purposes, according to the statement.

The report states two MSHP investigators traveled to Washington County, where they met with the mother and her son at their residence. The mother reportedly showed the investigators screenshots of Snapchat messages between Skaggs and her son, discussing Skaggs supplying the vape cartridges.

One of the messages from Skaggs allegedly stated, "Can I ask you a question and you be honest with me? ... Did it bother you to send me pics and videos or when I touched you?"

When asked about the messages, the report states the juvenile told the investigators that Skaggs had asked him to send nude pictures of himself through Snapchat for the vape cartridges he had given him. The boy reportedly said the first time this occurred, he was at his father's house in Potosi, and he had sent a picture of himself performing a sexual act to Skaggs through Snapchat. The report states the juvenile also told police that in late spring of this year, he was staying at his father's house in Potosi when he had asked Skaggs to bring him some vape cartridges, and they agreed to meet at the Potosi R-3 Kindergarten Center.

The boy said he rode his bicycle to the Kindergarten Center by the basketball goals, and Skaggs arrived in his Potosi Police Department patrol car, wearing his uniform. He reportedly said Skaggs told him he was on his lunch break and to get into the car. The juvenile said he got into the passenger seat, and Skaggs touched his private area under his clothes, according to the report. The boy said he didn't like it and made an excuse to leave. He said Skaggs gave him vape cartridges during that incident.

The report indicates that the juvenile told investigators he had sent about 20 photos and videos of himself performing a sexual act or exposing his private areas. The boy reportedly said Skaggs had told him about another high school student with whom he was doing something similar. Skaggs allegedly told him he was paying the other boy to do the same things but did not mention the name of the other boy.

An investigator conducted a data extraction of the juvenile's phone. The report states that once the data extraction was completed, the phone was taken out of Airplane Mode, and immediately a Snapchat message was received on the phone from Skaggs.

The message from Skaggs allegedly stated, "What happened? I guess you're not answering me."

Skaggs reportedly had his location services active, and the message was sent from a Best Western in Jefferson City. Earlier in the evening, the report states Skaggs had sent a Snapchat message to the juvenile with a picture of a bottle of whiskey. The Snapchat account displayed a name containing Skaggs' name and his badge number. Further, the Snapchat user icon was a uniform police officer, according to the report.

On Wednesday, MSHP investigators conducted an interview with Skaggs. During the interview, Skaggs reportedly admitted to trading vape cartridges to the juvenile in exchange for nude pics and videos. Skaggs also admitted to touching the boy's buttocks through his clothing but denied having sexual contact with the child under the clothes.

Skaggs was booked at the Washington County Jail on Wednesday, and a $100,000 bond has been set in the case. If released on bond, the man is prohibited from having contact with anyone under the age of 17.

The criminal complaint filed in the case notes that Skaggs had accepted a position as a school resource officer at Potosi R-3. The charging document indicates that Skaggs faces a potential life sentence plus 37 years in prison if convicted of the newly filed charges.

After the charges were filed on Wednesday, Chief Gum issued a press release about the situation. The press release noted that Skaggs is no longer employed with the Potosi Police Department.

"Mr. Skaggs resigned his position with the Potosi Police Department and surrendered his Peace Officers License," the press release states. "I want to assure the community that we take all allegations against police officers seriously, and we hold our officers to a high standard. Honesty and transparency are at the core of our agency and shall be upheld. There will be no further comment from this agency regarding this incident."

An area man is charged with murder this week after allegedly shooting and killing his nephew during a heated altercation on Sunday.

Hearne pleads guilty to involuntary manslaughter in 2017 stabbing death of Morris, gets 14 years

An area man pleaded guilty this week to involuntary manslaughter in connection with the 2017 stabbing death of a Farmington woman. The man was…

A St. Francois County Jail inmate awaiting trial for murder is facing new charges this week after two other inmates reported being sexually as…

Harris charged with arson, burglary after allegedly burning down a church, mobile home

Henslee charged with another sex crime involving a child after being accused of sodomy, child molestation earlier this year

A Park Hills man is accused of attempting to entice a child to engage in sexual conduct in Washington County. The felony case was filed a day …

An area man has been charged this week following reported allegations of sexual contact with a young child.

An area woman and her mother were arrested in Iowa after allegedly fleeing authorities in Iron County on Monday. The pair reportedly took off …

Why the colors of sunsets are so incredible

Why the colors of sunsets are so incredible