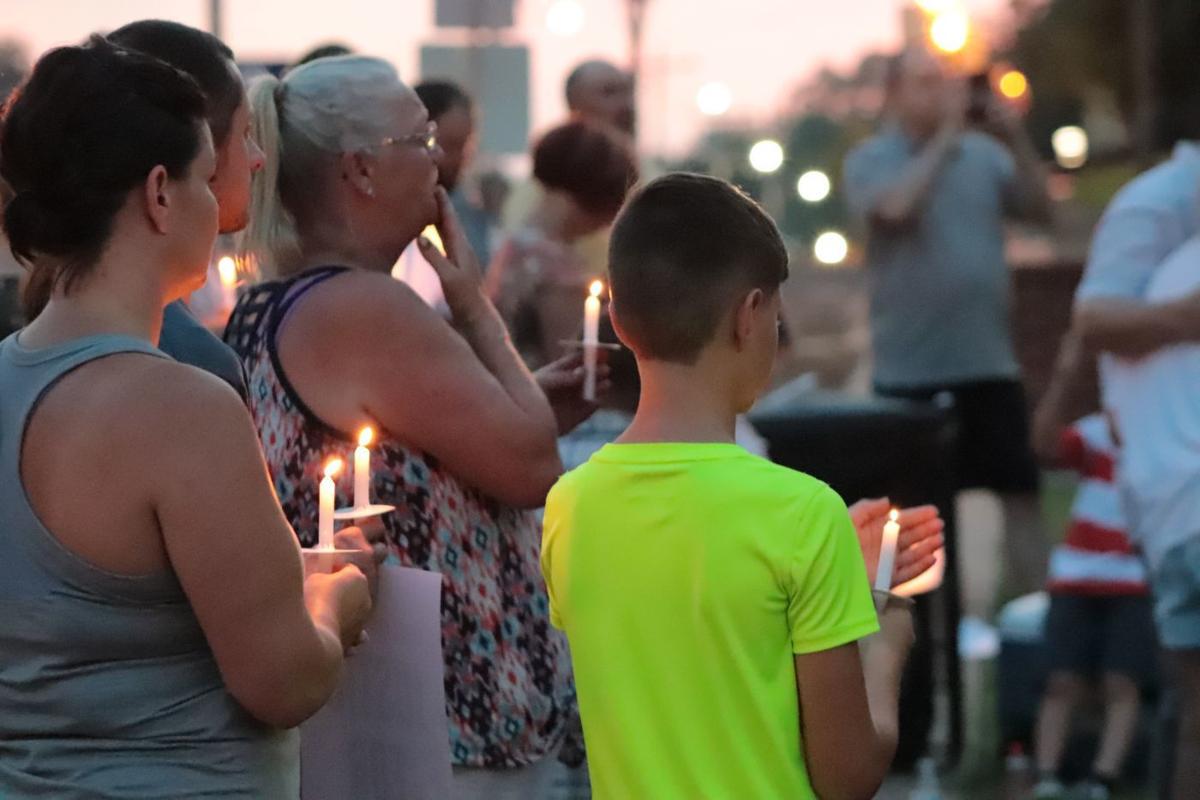 Several individuals gather outside the Ste. Genevieve County courthouse for a vigil marking five years since the disappearance and death of Lynn Messer. 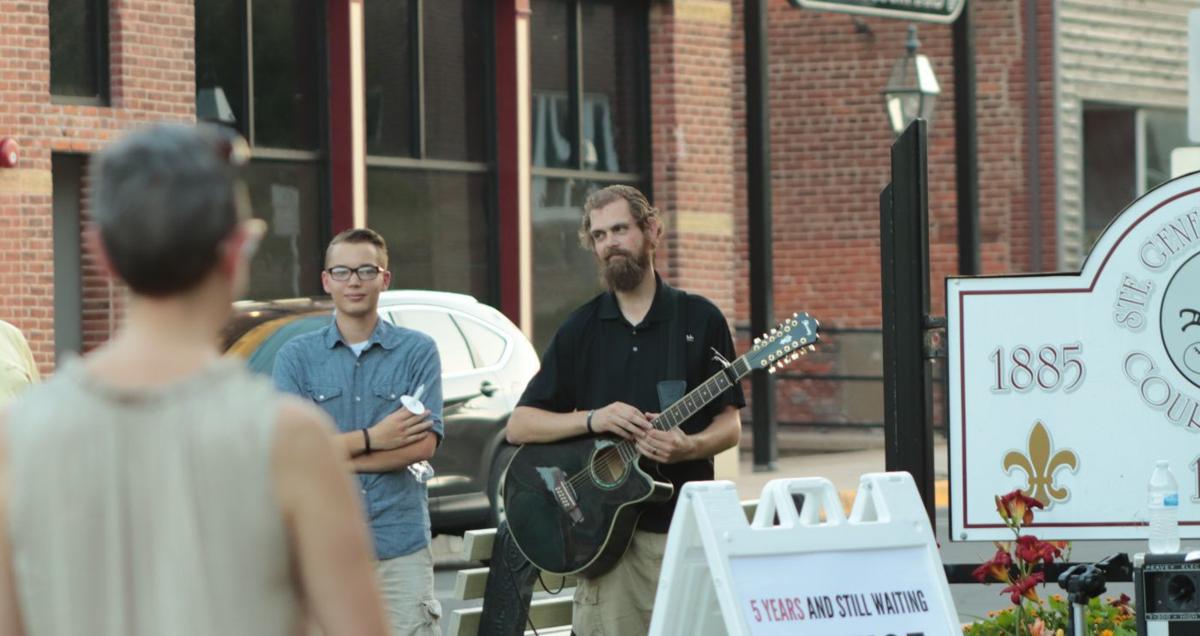 Music played in memory of Lynn Messer who disappeared five years ago fills the area outside the Ste. Genevieve County Courthouse Monday evening. Many people gathered to hold a vigil for Messer and her family. 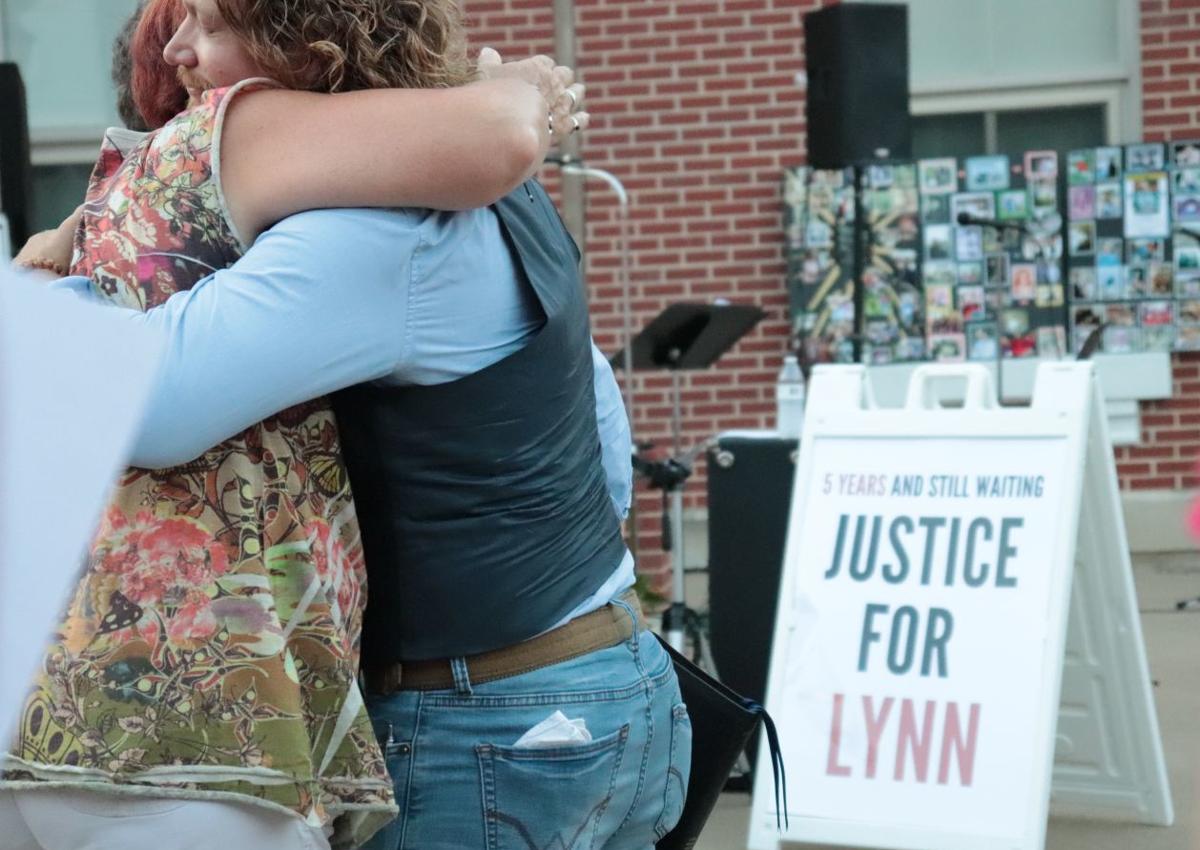 Abram Messer gives a loved one a hug after speaking to the crowd outside the courthouse in Ste. Genevieve about his mother Lynn Messer who disappeared five years ago. 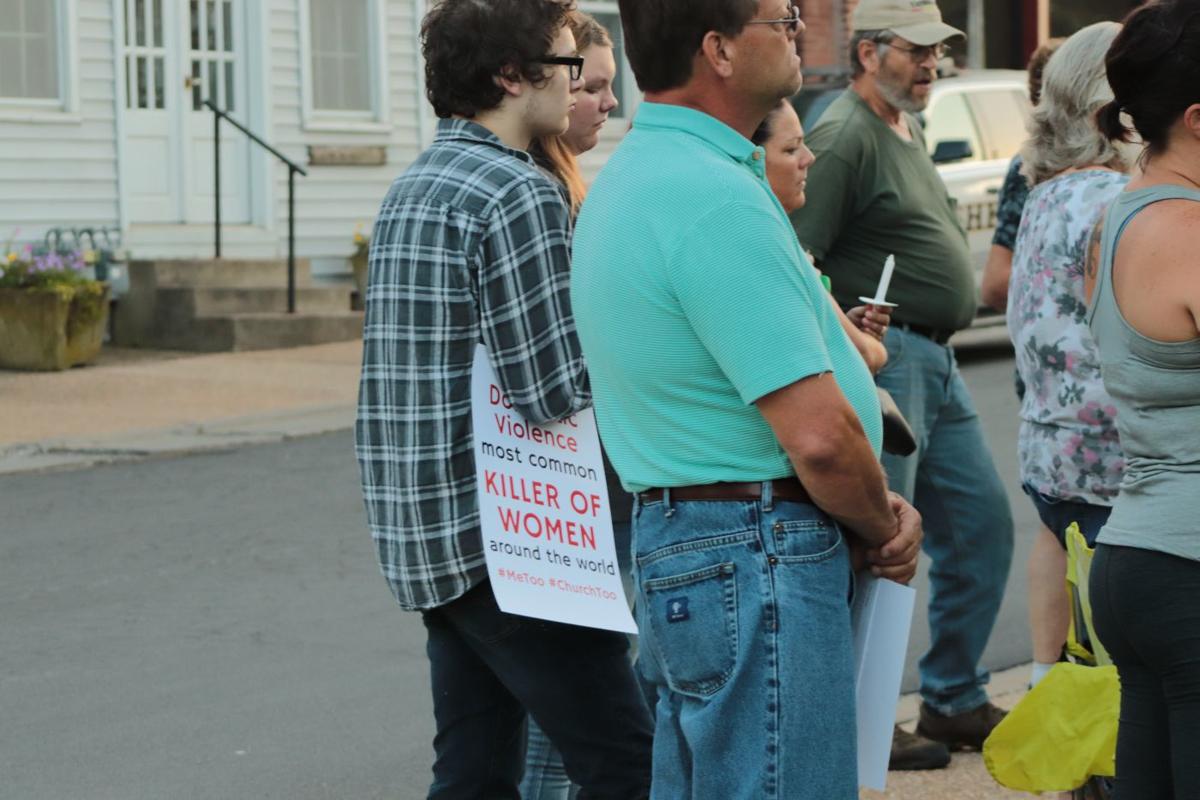 Friends, family members, and advocates calling for justice for Messer gathered outside the Ste. Genevieve County Prosecuting Attorney's Office on the front lawn of the county courthouse.

The vigil began at 7:30 p.m. with acoustic guitar and songs being played in Messer’s memory. A crowd of about 75 people held signs demanding answers and justice while they solemnly listened to the account of Messer’s disappearance.

Carolyn Deevers shared the timeline of Messer’s disappearance and death with vigil attendees.

Deevers is a St. Louis area abuse survivor advocate and one of the organizers of the rally. She has also followed the story of Messer's disappearance and death on her blog www.spiritualbattles.org.

Messer was reported missing from her home on the morning of July 8, 2014. Despite extensive searches, she remained missing until her body was discovered on the family farm on Nov. 1, 2016. No arrests have been made in the case to this date.

"Many questions remain surrounding Lynn Messer’s death. How did Lynn die? How could a small woman with an injured toe and hip replacements walk through pouring down rain in a thunderstorm, in the dark of night, over muddy ground, and according to family members, have to avoid electric fences in the dark, and open and closed multiple heavy gates to arrive at her destination?” said Deevers. “Was it murder? If so, was it premeditated? If it was murder, was her body moved or somehow concealed to keep search and rescue from finding her?

“Trained dogs should have found her scent, especially after a few days of her remains being in the elements,” Deevers said. “How is it possible her remains were not discovered in the extreme heat of the summer in a location that had a marked grid/map for everywhere the search teams and search dogs had looked?"

The prayer vigil attendees also heard remarks from Messer’s sons, Abram and Aarron, as well as her grandson, Gabe about how special Messer was and the impact her death has had on their family.

Also helping to organize the prayer vigil was Cheryl Summers, a St. Louis area resident, domestic abuse survivor advocate and founder of the For Such A Time As This Rally, a group addressing abuse within the Southern Baptist Convention.

“Many times the reality of an abusive home life is not evident to the outside world,” said Summers. “The question of what Lynn faced behind closed doors in her own home is one that many of us have asked.

“We will gather on the 5th anniversary of Lynn’s death to remind the community that Lynn deserves justice, and her family deserves answers,” said Summers.

The vigil ended with people passing flames from their white candles to one another until the courthouse area was lit with an orange glow as the sunset. A final prayer for closure in the case was heard and a plea was made to bring justice and answers to Messer's loved ones.

"We continue to pray that the Lord will lead law enforcement, reveal the truth and bring justice," said Messer’s son Abram. "For five years, we have been praying and now, more than ever, we are confident that truth and justice will prevail."

In late March 2017, the Ste. Genevieve County Sheriff’s Department received a report on Messer's remains from the St. Louis County Chief Medical Examiner and Forensic Pathologist Dr. Mary Case. At that time Case determined that Lynn had, in fact, been exposed to the elements for the entire two-year time period she had been missing.

During Case’s investigation she felt it would be beneficial to send off hair samples for toxicology testing since nothing came back indicating a definitive cause of death. Those results have since come back inconclusive.

Kerry Messer has said he believes his wife committed suicide.

Who is Lynn Messer?

The disappearance of Lynn Messer continues to be at a standstill as law enforcement officers await the results of additional forensic testing.

Lynn Messer case to be featured on TV series Sunday

The disappearance of Lynn Messer, a story which has been told by countless media outlets nationwide, is going to be the subject of a program a…

The ongoing investigation of the disappearance of Lynn Messer is still at a standstill while law enforcement awaits forensic testing results.

On Nov. 1 several items were located near or on the remains of Lynn Messer, who went missing over two years ago.

In a time where family should pull together, the Messer family has found themselves distant from one another.

Daily Journal reporter Renee Bronaugh is undeniably the most knowledgeable member of the media concerning facts about the Lynn Messer case. Sh…

Kerry speaks on accusations and possibility of suicide

Kerry Messer discussed the emotions he felt when his wife's remains were found this month.

Son speaks on how remains were found

Aaron Messer, son of Lynn Messer, explained how he came to be on the farm and how his daughter found Lynn’s remains.

** Editor's note - This is a portion of the interview with Kerry Messer on Monday at his family farm. Be watching for a more detailed story on…

Several individuals gather outside the Ste. Genevieve County courthouse for a vigil marking five years since the disappearance and death of Lynn Messer.

Music played in memory of Lynn Messer who disappeared five years ago fills the area outside the Ste. Genevieve County Courthouse Monday evening. Many people gathered to hold a vigil for Messer and her family.

Abram Messer gives a loved one a hug after speaking to the crowd outside the courthouse in Ste. Genevieve about his mother Lynn Messer who disappeared five years ago.