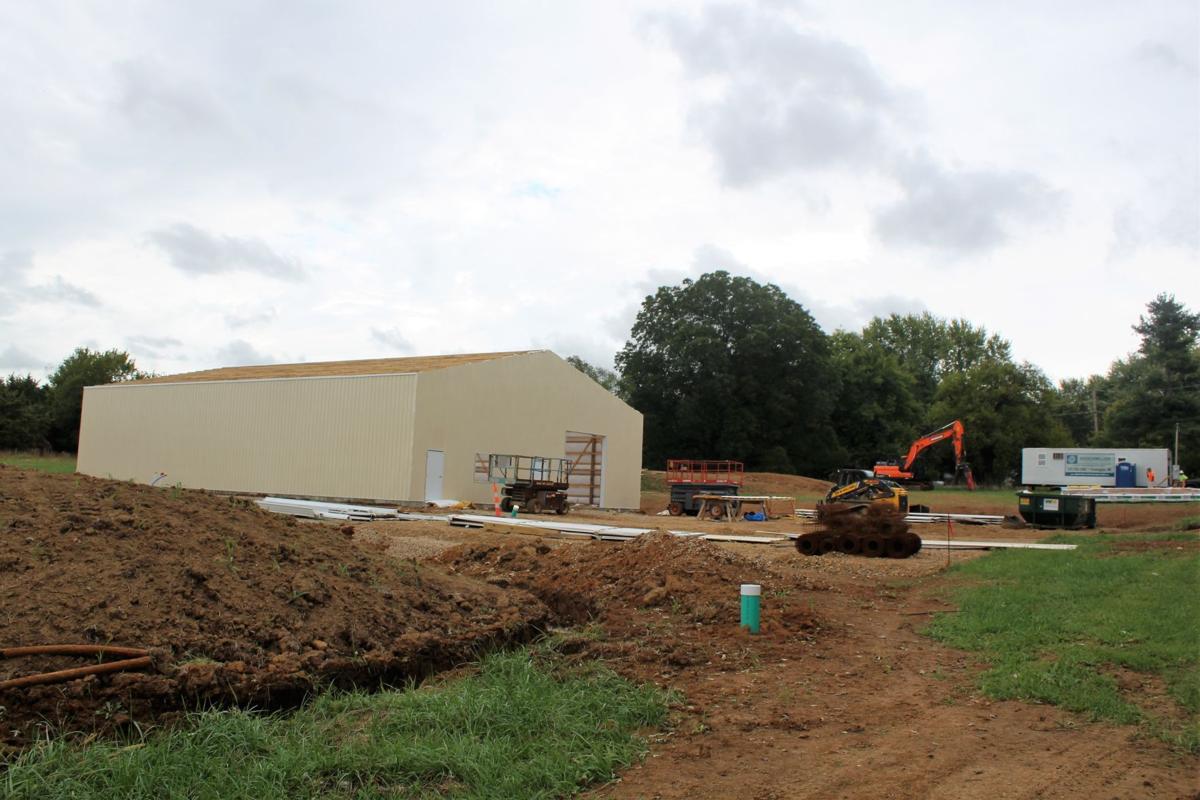 Construction has started on the new welding building on the campus of Mineral Area College. 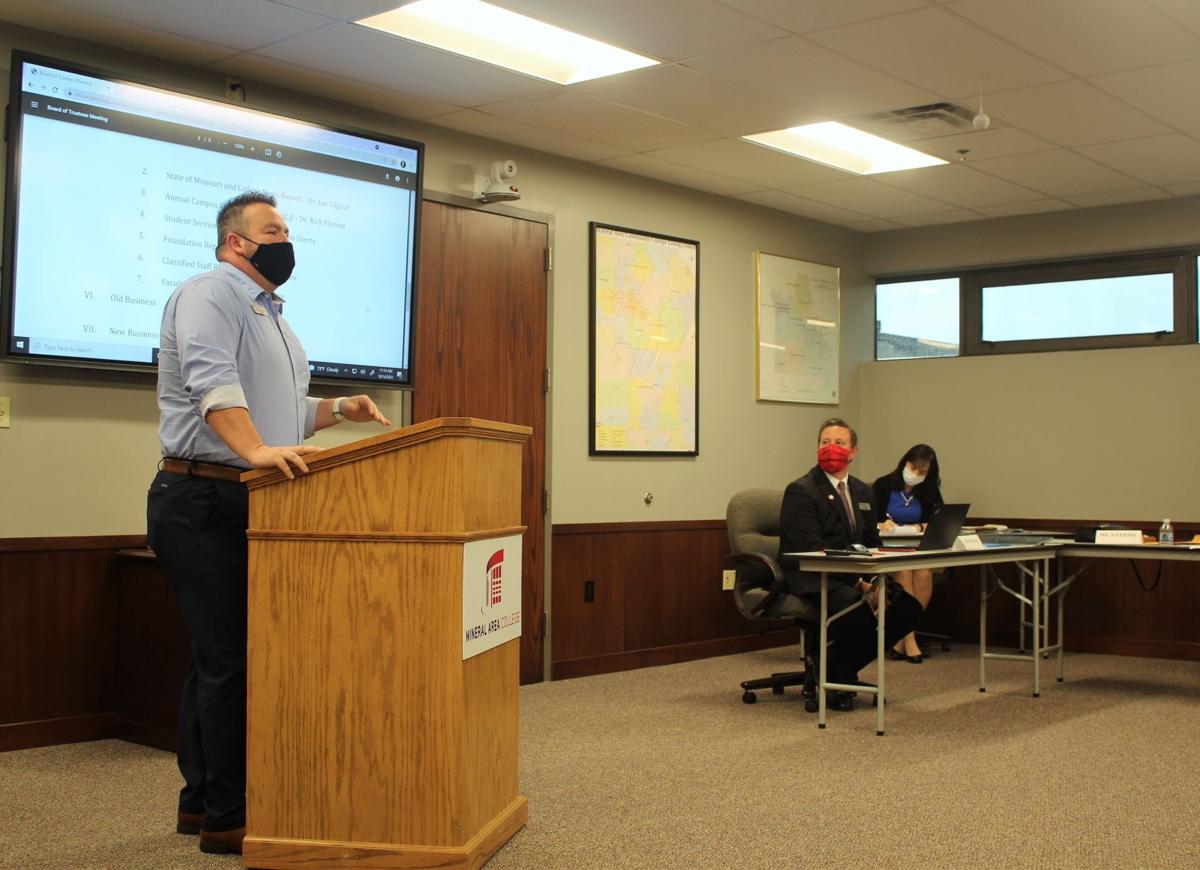 Construction has started on the new welding building at Mineral Area College.

President Dr. Joe Gilgour gave the college's Board of Trustees an update during their monthly meeting on Thursday.

“If you drove in the main entrance, you saw our welding building on the right side,” he said. “It's moving along really fast, very quickly, which is good.”

MAC plans to offer classes in the building in January.

“We are very excited about that,” he added.

Gilgour said they are also in the beginning stages of work on the 80,500-square-foot technology center.

The state awarded MAC $5 million for the new center.

“Because of the timing, we have a year to spend that $5 million,” he explained. “We’ve had to get to work on some surveying and some details. So we're working on that right now. You see some land being cleared a little bit. That's for surveyors to figure out what they're going to need to do when it comes time to do it. So you should see some more action there.”

He said they are applying to receive grant money and American Rescue Act funding to help with the project.

They hope to have a groundbreaking ceremony for the project during the first week of November, possibly on the date of the next board meeting, Nov. 4.

Gilgour told the trustees that masks will still be required on campus. As of Thursday, St. Francois County went from red to orange on the Center for Disease Control and Prevention’s map.

COVID-19 cases have been dropping in the county for the past few weeks.

“As long as we're in red or orange, we keep masks on,” he said. “But that's a good direction we are headed. For yellow or blue, we will remove masks. And then if it goes back, we'll go back to it.”

The college follows CDC guidelines that if the county is in the red or orange zone, masks are required indoors on campus. If it’s in the yellow or blue zone, the CDC recommends masks indoors for those that are unvaccinated.

“We have a very high vaccination rate amongst our employees,” he added. “So we would keep with that recommendation, but we would not require masks at that time. So hopefully any day now, we will turn yellow.”

During her update to the board, Dean of Student Services Julie Sheets got a little emotional talking about the difficult time her team is going through after the death of Debbie Portell, a longtime financial aid department employee.

“Debbie truly loved her job and she was extremely proud to work for Mineral Area College,” she said. “And we really, really miss her.”

She said many colleagues have stepped up to help as they were in the middle of disbursement of financial aid and scholarships, as well as training on new software.

“It’s been a rough month,” she added.

Sheets also told the board that numbers are up for high school dual enrollment, transfer students, and A+ scholarship students. She also said the college has 33 international students, which is a record.

Registration for the spring semester starts on Monday.

He said the main change has been the Park Hills Police Department taking over police services on campus.

“We got really lucky whenever we got Sgt. (Todd) Inserra,” he said. “He's been great. He's worked kind of hand-in-hand with Julie (Sheets) and I and it's been great. We've had a few incidents the past few weeks. We've actually got them wrapped up really quick. So it's kind of a refreshing thing, a positive change.”

Flotron pointed out that the biggest change in the crime stats was the number of liquor law violations. The numbers jumped from three to 41. But he said that has to do with how the numbers were reported.

The three represents the number of cases, he said, whereas the 41 represents individuals. Each of the three cases likely involved multiple individuals.

The actual number of cases rose to eight.

“The pandemic had a lot to do with it because everybody was out of school,” he explained. “And then when they came back to school, in the fall, it was party time. So basically, our cases went up from there.”

MAC Foundation Director Kevin Thurman updated the board on the beginning of the Enhancement Grant fundraising campaign. It runs through Dec. 31.

The grant focuses on improving career education training programs through curriculum enhancement, instructional equipment, and facility improvement, particularly in high-demand occupations, according to the college.

It is a three-for-one match.

“So every dollar we raise, we'll get another $3, which makes it like a $4 gift,” Thurman said.

This year, MAC has an online portal where community members can donate.

“Our goal this year is to raise about $50,000,” he added. “I just found out about 10 minutes ago that we were given a $20,000 gift for the Enhancement Grant campaign from our friends at Cap America once again. This is our third year in a row that they did that, so we really appreciate that.”

According to classified staff representative Logan Shropshire, MAC’s drive-thru trunk or treat will be Oct. 28 from 5:30 p.m. to 7:30 p.m.

In other matters, Human Resources Director Kathryn Neff said that MAC’s insurance committee shopped around, but all of the other rates were higher than the rate increase from United Healthcare, which was 12%.

“We knew as an insurance committee that the college couldn't take a 12% increase,” she explained. “We had budgeted 5% because we knew we wouldn't have a flat renewal this year. If we didn't make any plan changes, that would mean that employees would have to pay about $45 per month in their premium. And we didn't want to make that recommendation. So we did ask for plan change options.”

The two plan change options are an increase in the deductible of $500 and a change in the prescription formulary to four tiers of co-pays.

Neff said a small percentage of employees would be affected.

In other business, the trustees:

Construction has started on the new welding building on the campus of Mineral Area College.