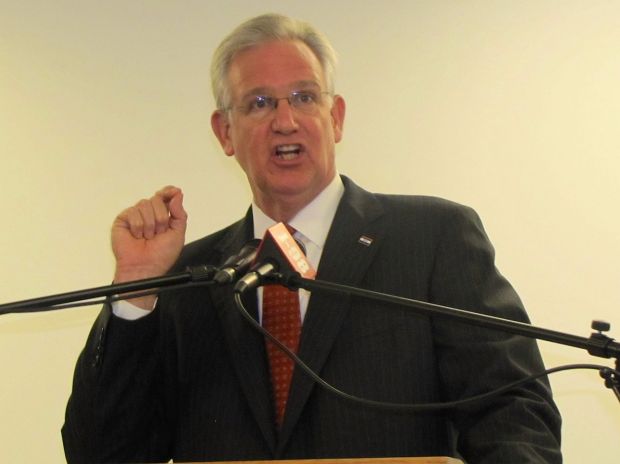 Missouri Gov. Jay Nixon speaks Thursday night at Mineral Area College, warning the crowd about the potentially devastating cuts in education if the state legislature overturns his veto of a bill next month. 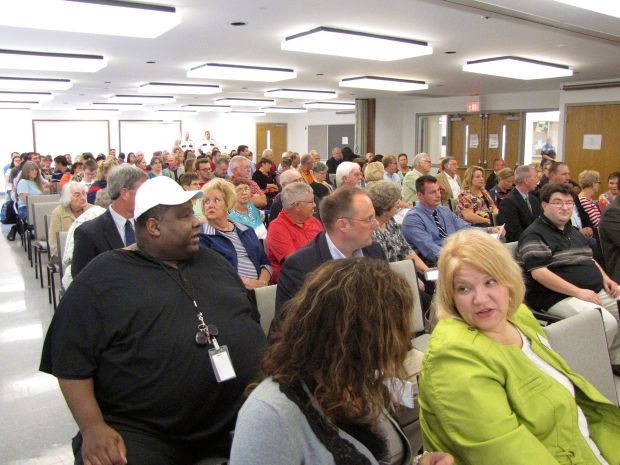 A crowd largely made up of teachers, administrators and school board members filled MAC’s North College Center to hear Gov. Jay Nixon share his concerns about a bill that he recently vetoed. A number of Republican state legislators are threatening to overturn Nixon’s veto on Sept. 11.

PARK HILLS – Gov. Jay Nixon came to Mineral Area College Thursday night to deliver a pointed message he’s been taking across the state over the last few months — House Bill 253 is a mistake for the state of Missouri.

The governor, along with senior administration officials and education leaders from throughout southeast Missouri, filled the school’s North College Center to discuss the impact of House Bill 253 on Missouri’s public schools ... and the outlook, said Nixon, is grim.

In recent weeks, area school boards joined more than 60 others around the state in passing resolutions urging the legislature to sustain Nixon’s veto of House Bill 253, saying it would jeopardize the state’s ability to fund public education.

“Each day more and more Missourians, including many lawmakers who initially supported this bill, are now voicing their concerns about the impact House Bill 253 would have on public education and other vital services,” said Nixon. “House Bill 253, and its $800 million price tag, would drain millions of dollars away from our schools — and into the pockets of lawyers and lobbyists. That’s why it’s so important that the House sustains my veto of this fiscally irresponsible experiment so that we can continue to protect taxpayer dollars, support our schools and move our economy forward.”

“A downgrade to the state’s credit rating would increase the interest paid on state and local school bond issues,” Nixon said. “This is not something we want to see happen to our state.”

Data also released last month by the Missouri Department of Elementary and Secondary Education at the request of the Missouri Association of School Administrators showed a breakdown of district funding levels under two scenarios if House Bill 253 becomes law.

The first scenario showed the impact using the General Assembly’s fiscal note, which estimates a total cost of $692 million each year once the bill is fully implemented. The second scenario showed the impact using funding levels if the Federal Marketplace Fairness Act becomes law, which would increase the cost of House Bill 253 to $1.2 billion as early as the current fiscal year.

The Federal Marketplace Fairness Act would allow for the taxing of purchases made on the Internet and, according to Nixon, could be voted into law by the U.S. House of Representatives as early as this year.

“To pay for the high costs associated with House Bill 253, Missouri would have to make devastating cuts to our public schools and institutes of higher learning,” he said. “Cuts resulting from House Bill 253 would surely harm our long-term economic growth,” Gov. Nixon said. “The fact is, members of the General Assembly can either support House Bill 253 or they can support education – but they can’t do both.”

The negative impact of House Bill 253 on schools in southeastern Missouri could be significant. When fully implemented the cost each year could be $731,000 for Central R-3; $228,000 for Bismarck; $1.1 million for Farmington schools, $1 million for North County and $402,000 for West County schools.

Should the Federal Marketplace Fairness Act becomes law, the cost for the current year could be $1.2 million for Central R-3 ; $395,000 for Bismarck; $1.9 million for Farmington, $695,000 for West County and nearly $2 million for North County schools.

Over the course of the hour and 20 minute long meeting, Nixon repeatedly drove several points home:

• Supposed triggers in the bill will not prevent harmful cuts to education and other services as its proponents have contended.

“Two of the most costly provisions of the bill take effect regardless of whether revenue is going up or down and could begin dramatically reducing revenue in the current fiscal year,” said Nixon. “Where the revenue triggers do apply, problems with their drafting means they provide no protection from cuts to education and other public services. In fact, under this bill, taxes would have been cut in 2009, which was definitely not a good year for the state as far as income is concerned.”

• A tax cut is not necessary for Missouri to compete for businesses with the state of Kansas.

“Last year, Kansas lawmakers passed their own unaffordable tax plan which forced them to come back this year to push through a $777 million sale tax increase and make drastic cuts to education,” said Nixon. “These actions still didn’t prevent Moody’s from downgrading some of Kansas’s bonds. Since Kansas’s tax cuts went into effect, Missouri had the 12th fastest employment growth in the nation, while Kansas ranked 23rd.”

• Missouri does not need a tax cut to promote economic growth.

“Our state already has some of the lowest taxes in the nation and was recently recognized as a top 10 state for business for the fourth year in a row,” Nixon explained. “Today, Missouri’s unemployment rate has remained below the national average for 46 straight months, employers added nearly 13,000 jobs last month and Missouri’s perfect Triple-A credit rating was recently reaffirmed.”

• Education spending isn’t the only thing that would be negatively affected by House Bill 253’s implementation.

When asked by an audience member if this was clearly a party issue of Democrats against Republicans, the governor said he had “many friends” on both sides of the aisle and was able to work with both parties when necessary. He also noted there were Republican legislators who had initially voted for the bill but were now prepared to sustain Nixon’s veto after learning of its serious shortcomings.

“If my veto of House Bill 253 isn’t overturned, I’ll be happy to sit down with legislators in January and discuss positive things we can do to encourage business growth without the potential negatives that could be brought on by this poorly conceived bill,” said Nixon.

He asked that attendees at Thursday night’s meeting share the information they had learned with friends and neighbors and to contact legislators to express their viewpoint in a respectful and personal way.

“I get hundreds of emails everyday, all politicians do,” said Nixon. “What makes an impact on us is when we get a letter with a stamp on the envelope. That’s when we know somebody really cares about an issue.”

“To pay for the high costs associated with House Bill 253, Missouri would have to make devastating cuts to our public schools and institutes of higher learning.” — Missouri Gov. Jay Nixon, speaking at MAC

The Daily Journal asked area superintendents to share their thoughts on the possible override of Gov. Jay Nixon’s veto of House Bill 253 by th…

Man acquitted in deaths of 7 motorcyclists

Man acquitted in deaths of 7 motorcyclists

Missouri Gov. Jay Nixon speaks Thursday night at Mineral Area College, warning the crowd about the potentially devastating cuts in education if the state legislature overturns his veto of a bill next month.

A crowd largely made up of teachers, administrators and school board members filled MAC’s North College Center to hear Gov. Jay Nixon share his concerns about a bill that he recently vetoed. A number of Republican state legislators are threatening to overturn Nixon’s veto on Sept. 11.