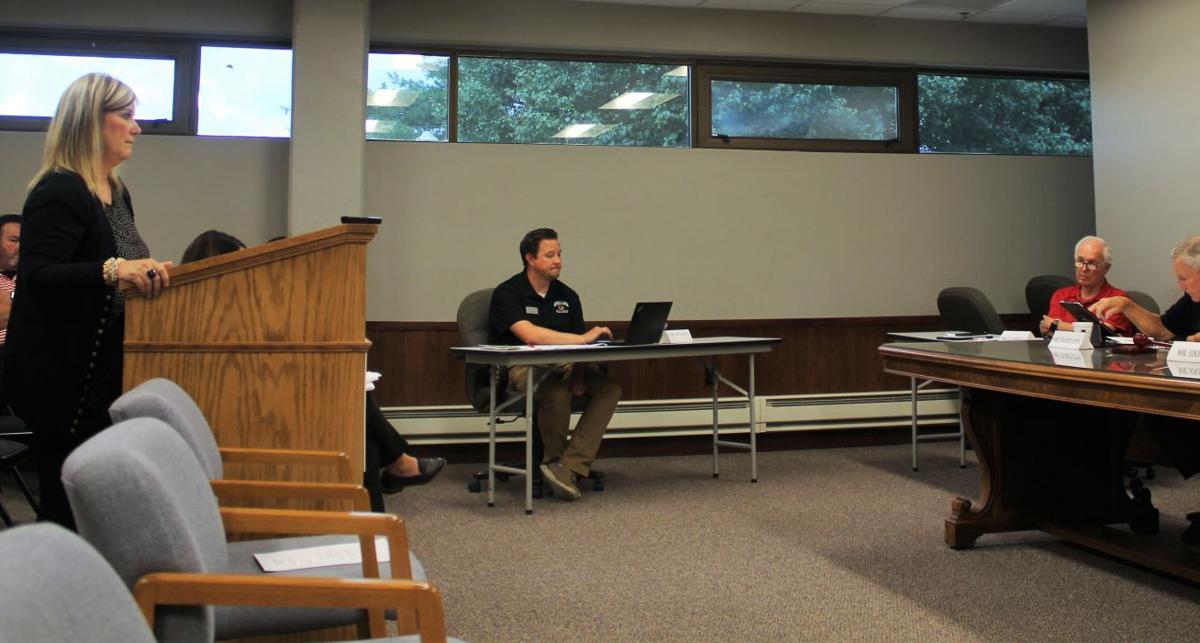 Mineral Area College Chief Financial Officer Lori Crump asks the Board of Trustees to approve the budget for fiscal year 2022 during Thursday's meeting. 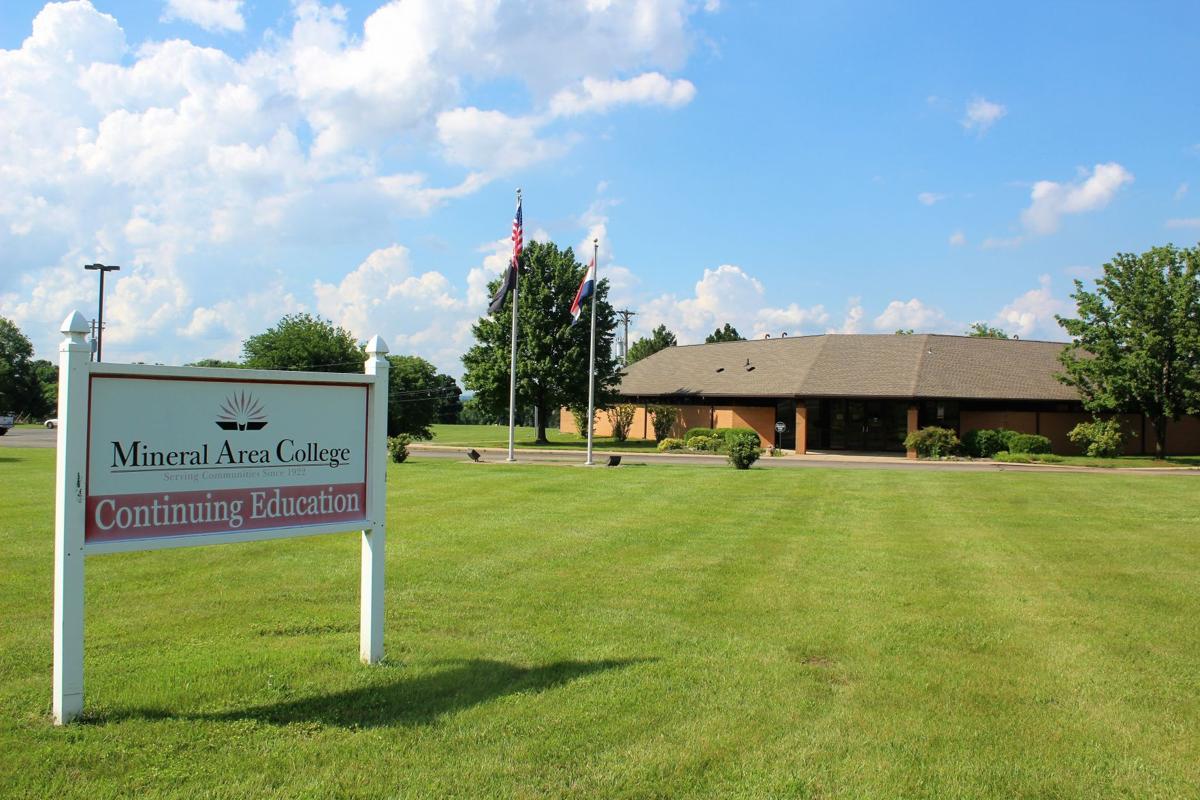 Mineral Area College plans to use its current Continuing Education building as the space for the new Early Childhood Education Center.

The Mineral Area College Board of Trustees approved the budget for fiscal year 2021-22 during Thursday’s meeting.

The approval came with the condition that, during next month’s meeting, there would an amendment to the budget to allocate money to get the ball rolling on the Early Childhood Education Center.

Overall for the budget, Chief Financial Officer Lori Crump said, they’re in better shape this year than they were last.

Crump said the total budget, including restricted and unrestricted, is $35 million, which is about $2 to $2.5 million more than last year.

“This year's budget does include about $3.4 million of our CARES (Act) money, which is the student aid portion, because that was more allocable to an account,” she said.

The other CARES Act – or now Higher Education Relief Fund (HERF) – money will be budgeted mid-year as they are used by the various departments, as was done this year.

“So that's the biggest difference of the bottom line total budget dollars is that student aid portion,” she added.

As for tuition and fees in the budget, Crump said they ran a detailed report of numbers for head count and credit hours, which saw a 10% decrease.

“But you have to consider that we have the tiered tuition in this year that was included in there,” she explained. “We had some fees increase, which is also included in this based on what we thought the hours would be.

She said they were able to budget more this year for expenses like training conferences, which they haven’t been able to do in the past few years.

They also budgeted a lot more for general maintenance that needs to be done around campus that they have put off, Crump said, such as equipment in the cafeteria and HVAC systems at College Park.

“We're getting the $1.5 million deferred maintenance from the state but that's going to be eaten up pretty quickly,” she added.

Seeing the $4.3 surplus from last year’s budget, Trustee Mit Landrum asked Crump if they had factored in any faculty raises.

“We've been talking for years that we want to give people a raise,” he said.

She said they included a two-step raise for faculty, which restores them to where they should be, as the last raises were given in the fall of 2019. The other staff members are budgeted to get the equivalent 2% raise.

“That would be as of January 1, if the first part of the budget year goes according to how we predicted to be and there are any surprises in there,” she added. “That was about $155,000 that was included in this budget.”

Landrum then asked if it’s possible for that number to go up.

“The reason it’s January 1 is because we're cautiously optimistic about the fall,” President Dr. Joe Gilgour said. “Unfortunately, it could go the other direction, as well, if things are bad. We want to be prepared either way. So that's why we kind of put this placeholder in to make sure it's there. It could be better. It's possible.”

Landrum also asked about the budget for the marketing department.

Crump said they budgeted $85,000 for marketing, which is an increase from last year.

“That seems a little thin to me because we're trying like crazy to get more people to come here,” Landrum continued. “We're making a lot of money. We accumulate money. So why are we not? It just seems to me it make sense to bump that up to have a least $100,000.”

Crump answered that she and Gilgour and Communications Director Danielle Basler have had conversations about that.

Landrum then asked if they put anything in the budget for the Early Childhood Education Center.

Gilgour said no because that was tied into the proposal for the new Technical Education Center.

“We don’t need to wait for the tech center,” Landrum answered, “because who knows when that will be done and it’s not even going to be in that building. It just seems to me that we could do that as some kind of independent something that will be a benefit for people here at MAC. We’ve got the money, so that’s my recommendation.”

The college plans to use the current Continuing Education Building as the new childhood center.

Early Childhood Education Department Chair Jennifer Sikes told the board that they projected that the center would sustain itself after five years. But state grants could also make a significant impact on the budget, she said, as the state is moving quickly to make reforms to early childhood education.

But in order to apply for those grants, the facility has to be ready and up to code, which was projected to cost about $22,000 a couple of years ago.

“Then once we apply, that's going to make a significant difference in the budget,” she explained. “And it could also sustain us quite quickly, more than the five years.”

Sikes said they’ve already missed out on one round of funding because the center wouldn’t be ready in time.

After this discussion, the rest of the trustees agreed with Landrum that now was the time to proceed with the project.

“Otherwise, I think we are going to miss the boat again,” Trustee Alan Wells said.

Sikes also said that now is a good time to do it with people starting to return to work.

“But now that the economy's opening back up, and everybody's going back to work, there's a huge need,” she explained. “And the state of Missouri is saying, ‘We're not looking for mediocre care anymore. Everybody's going to have to up their game, and we need high quality facilities. And then we're going to give parents money to send their kids.’ So there's a lot more opportunity than there was even when I wrote that several years ago and when we went through the numbers for that.”

She said they would secure 40 spots to get started but would love to be able to expand from there.

Right now, the Continuing Education Building, which is an approximately 4,000 square-foot building, mainly houses the offices for the truck driving program. They plan to move those offices elsewhere on campus.

In the childhood center, they plan to have a multi-purpose room in the center with three classrooms and an observation room.

They expect the cost of $22,000 to increase significantly with current construction price increases.

After doing some research on new numbers, the board plans to vote on adding the childhood center to the budget during next month’s meeting.

To add this to the budget, Crump said they would need to reallocate the money for the childhood center from elsewhere.

Landrum suggested that they take that money out of the $648,000 that they estimate will be moved in the reserve fund.

“Well, we're not through the end of June yet,” Crump responded. “So we really won’t close out June until probably the end of August and know exactly where we're at for this fiscal year. But we should be in better shape than we were last year.”

Summer enrollment numbers are down at Mineral Area College.

Fifty years of theater in the Parkland will be showcased and celebrated Saturday before it's disbanded.

Mineral Area College Chief Financial Officer Lori Crump asks the Board of Trustees to approve the budget for fiscal year 2022 during Thursday's meeting.

Mineral Area College plans to use its current Continuing Education building as the space for the new Early Childhood Education Center.