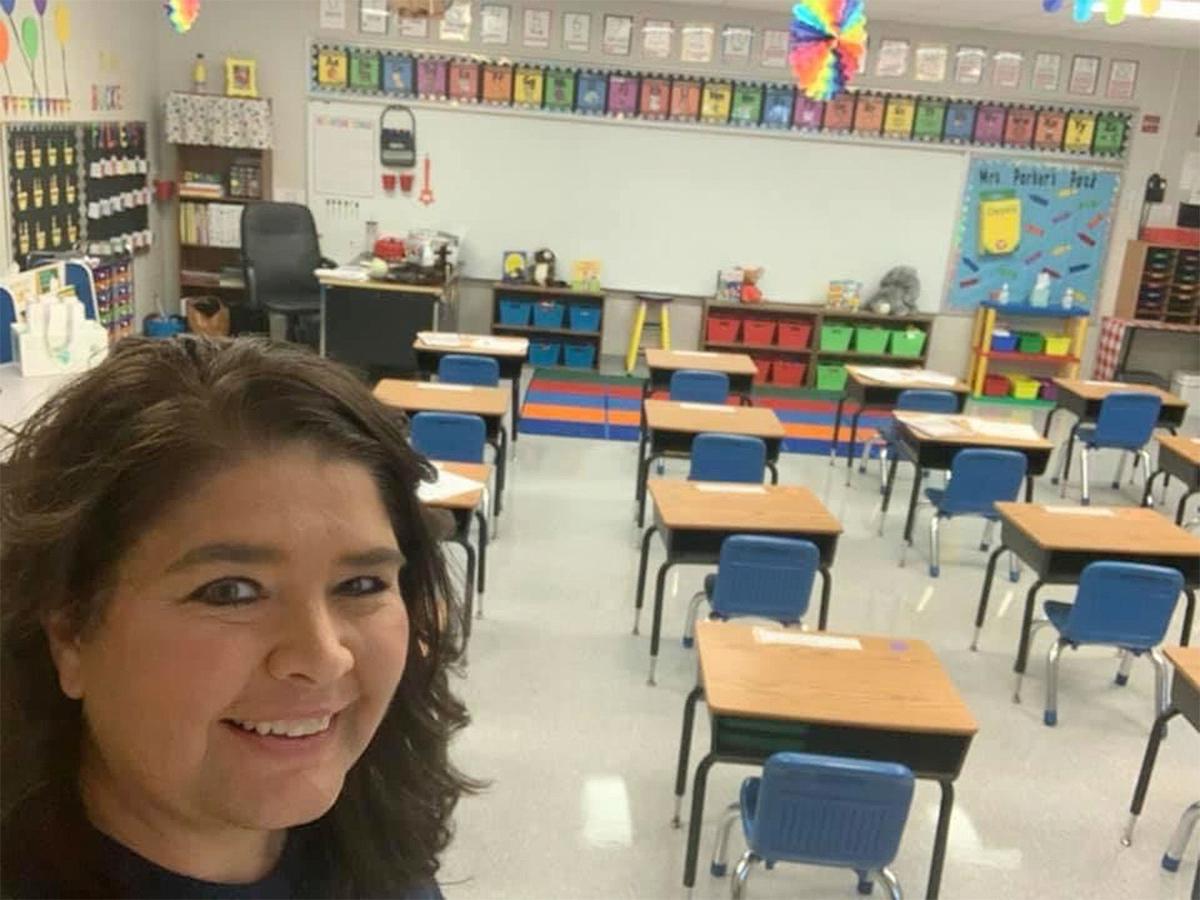 Amy Parker takes a selfie in her kindergarten classroom at St. Paul Lutheran School in Farmington. 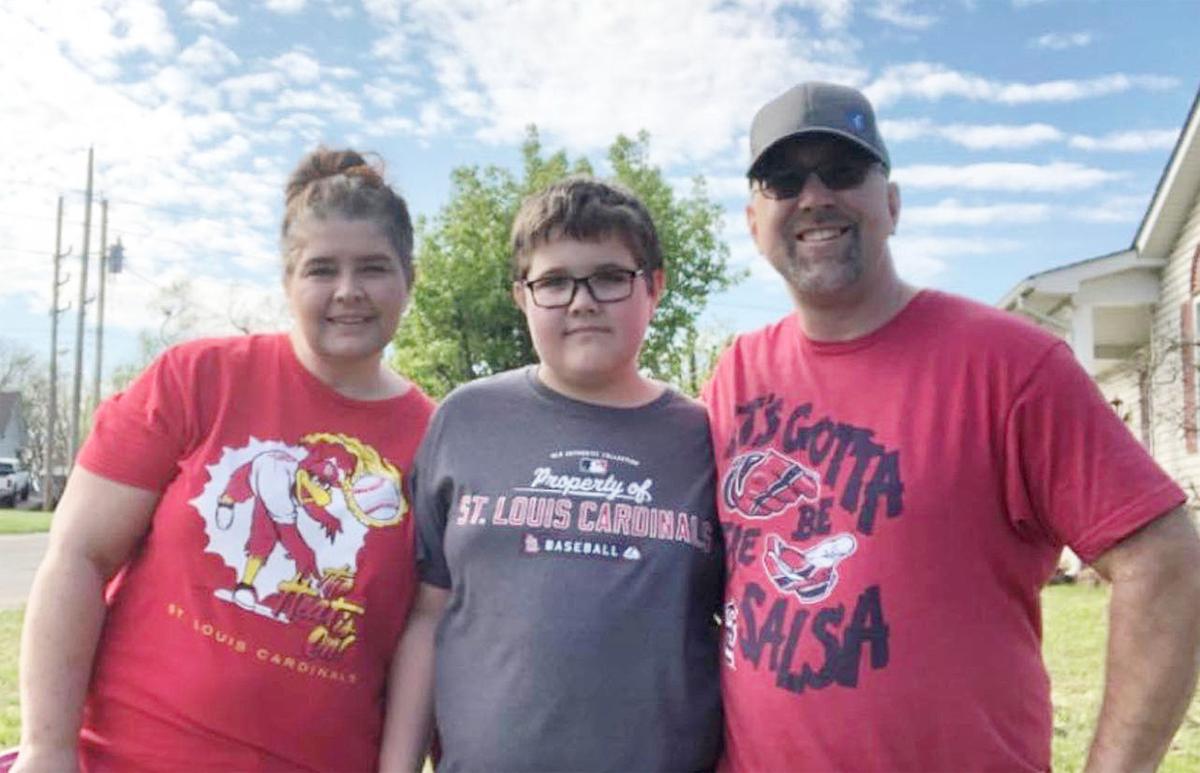 “I make sure that I cherish each day that I get to walk into my own classroom and live this dream-come-true to its fullest.”

That dream took off for Park Hills resident Amy Parker after she earned a cheerleading scholarship to attend Mineral Area College in 1994.

During this week, Teacher Appreciation Week 2021, Parker not only appreciates teachers, she appreciates the journey she took to become one herself.

About 40 years ago, when Parker was 5 years old, she knew she wanted to be a teacher – a kindergarten teacher. She played school with her little brother, with Barbies, with stuffed animals and with anyone who would sit still long enough for her to teach them their ABCs. “Being a kindergarten teacher is who I was meant to be,” she said. “I just knew it, even way back then.”

As a kindergartner, she was enamored not only with teaching, she was also the little mascot with the Central High School Rebel cheerleaders in 1981. She wanted to be a cheerleading coach.

“From that moment, I didn’t want to do anything else,” she said. “No Plan B.”

As Parker grew older, she said, she did not make the best choices. Instead of starting her teaching degree after high school, she withdrew when her time on the MAC cheerleading squad ended and took a career path that offered financial security.

She reported to work day after day, year after year. But her heart yearned for her dream job.

“God knew I had to go through some stuff first to completely surrender to him,” she said. “I had to seek his word, walk in faithfulness and let him direct my heart and life.”

Fast forward to 2016. Parker was still in the line of work in which she knew she did not belong. She was physically and mentally exhausted. After experiencing an awful Monday, she awoke the next day with an inner voice that told her, “Today is the day! You can quit and you will be alright!”

Parker prayed and asked for a sign. Minutes later, the phone rang. It was a business that wanted to interview her that afternoon.

So without another job lined up, and before the interview even took place, she resigned from her current job.

Parker declined the job from the interview that day because it wasn’t the right one for her. But a few months later, she received two opportunities which let her work and raise her son Kaden with husband John. After quitting her job in January 2016, she had two jobs by March 2016 and had enrolled at Central Methodist University to finally earn her teaching degree.

It was a stressful time for Parker. She was a mom and wife, full-time college student, and worked two jobs. Although she sometimes became frustrated and wanted to quit, she was encouraged by family and friends to continue her journey.

In March 2018, Parker again could not shake that inner voice. This time, it was the decision to move Kaden from public to private school. After much discussion, prayer and planning, the couple moved their son to St. Paul Lutheran School as a fifth grader.

“Little did I know the Lord wasn’t just leading me to send Kaden to St. Paul,” she said. “He was writing my story as well.”

Shortly after Kaden was enrolled in St. Paul, she was also hired at the school. She worked in preschool the first year and as a kindergarten aide the second year.

The journey to a teaching degree wasn’t short or easy for Parker. She faced many obstacles and became frustrated and disheartened at times. She prayed before exams, homework and more for strength to continue the pace needed to reach her dream.

“God provided what my heart has wanted all those years because I was faithful to him and recognized just how good he is no matter the circumstances,” she said.

Parker chased this special dream for 27 years. She’s nearing the end of her first year as a kindergarten teacher. She’s also sponsor of the middle school cheerleading squad.

“This wasn’t luck, this wasn’t coincidence,” said Parker. “This was God all the way!”

When Parker officially began her first year as a teacher earlier this year, she wasn’t nervous. She felt comfortable in a classroom setting and was more than ready to handle the normal challenges.

That is, except for the copier.

“I am in full support of that being a college course for education majors,” she joked.

Parker has a special connection with her class of 17 students. She was a paraprofessional for more than half of her students when they were in preschool. During the current school year, she’s had “far too many great memories to list.”

“My kids are the best,” she said. “They love big and work so hard.”

Parker said her students tell her she’s the “best teacher ever.” They give her treats, beautiful handmade artwork, and “the best hugs and sweetest smiles.”

A parent of one of her students recently told Parker that her daughter did not want to go to school one day because “Mrs. Parker won’t be there today.” The student’s mom shared that sweet story with Parker because her daughter loves her teacher.

Parker is grateful for her family’s never-ending support from her husband and son; parents Barb and Dave McMillian; brother Jeremy; and grandparents Herb and Doris McMillian and Shirley Pope. She’s also incredibly appreciative of her St. Paul family and board of education members. Specifically, Parker said her mom is “my biggest cheerleader.”

“My mom and Jesus were my rocks during all of this,” said Parker. It was hearing her words as she began her journey at CMU that kept her in check.

Parker will likely experience a whirlwind of emotions on May 22 when she walks across the stage at her CMU graduation.

“This will certainly be a defining moment in my life,” she said. “I know that it will be a feeling of accomplishment but not from what I have done alone, but because ‘I can do all things through Christ that strengthens me.’”

“To now know that my dream is complete is really surreal,” she said. “It means that it’s an opportunity to share just how good God is because he’s been with me every step of the way.”

NC board to discuss national topics

The following students have been named to the spring 2021 Dean's List at Southeast Missouri State University. Those noted with a * also were i…

Area youth were asked to use their imagination during the Stop Motion: Missouri's Endangered Animals Class at the Fredericktown branch of the …

Three schools in the Farmington School District have received awards for cultivating character in their students.

Amy Parker takes a selfie in her kindergarten classroom at St. Paul Lutheran School in Farmington.