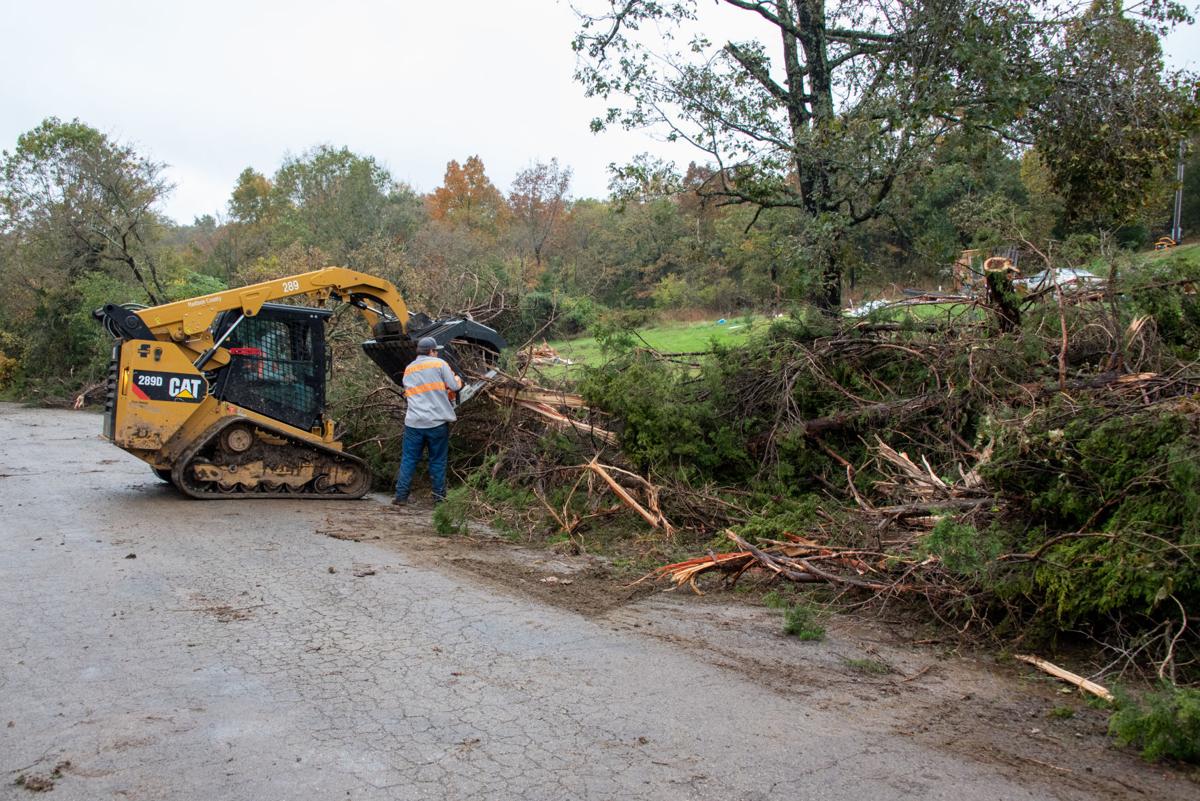 Madison County Road and Bridge crews work to clear downed trees throughout the county with plenty of work on their plates they continue to clear over a week later. 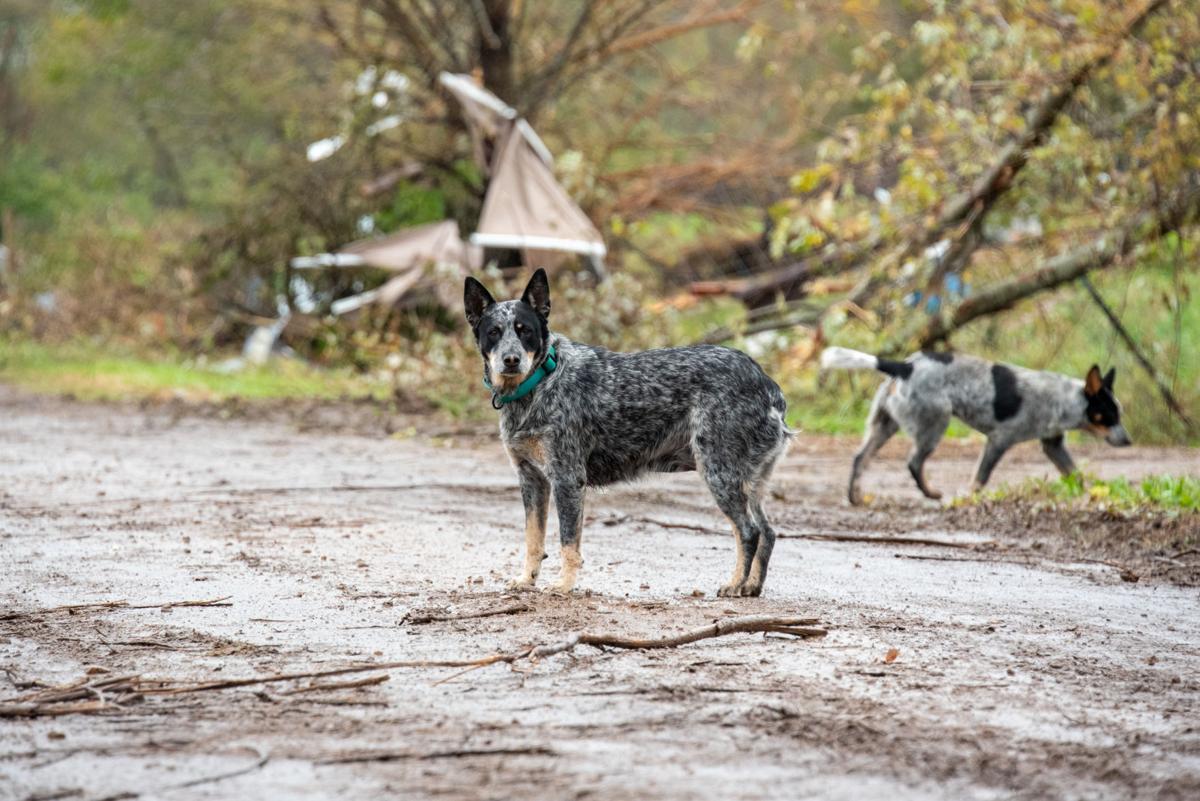 A dog stands in the roadway as officials assess damage in the area near the electric substation.

As the sirens were blaring and residents began moving to their basements, area first responders did the opposite.

They chose to drive into town where they knew they would be needed.

The EF-3 touched down near the St. Francis River at approximately 8:47 p.m. and with a max width of a half a mile the cyclone tore through houses, businesses and a power substation along its 18.9 mile path.

Madison County Emergency Management Director Dean Stevens said he was not expecting a storm like this in the fall but when he saw the debris field on Doppler radar he knew it was going to be bad.

"I got my family ready because the second cell that came through looked like it was going to be closer to my farm," Stevens said. "I got them ready as calm as I could and ready to get in the safe room before I headed into town. My wife was fine but my daughter was very upset about me leaving."

Stevens said his wife spent 10 years in emergency services so she understands when things happen he has to go. He said this is why he built a safe room in their new house, so he would know his family was safe while he was worrying about everyone else.

As soon as Stevens made it to dispatch he was already receiving calls for assistance to Catherine Place and then the radio system was knocked out for few hours.

"We could talk car to car but we couldn't hit the repeater and we couldn't communicate with dispatch," Stevens said. "So dispatch was giving me calls on my phone and they were calling me directly and I was giving it to them."

Stevens said despite this added obstacle everyone and everything seemed to work like a well oiled machine. He said crews just started showing up and helping.

"Out (Highway) 72, on (County Road) 521, was the earliest portion of any damage," Stevens said. "There is one house out there that was destroyed. We got on 521 and drove down it for a mile and there was no damage and I was like is this the right spot and then all of the sudden there it is and as the crow flies it cuts right back to that house."

Stevens said he and his brother Dan went to the call and when they arrived, the woman in the home was fine.

"She is the only person I have talked to that rode out complete destruction without a basement. She was in the bathroom," Stevens said. "The bathroom was still there. You could see out from the other rooms.

"When she called, the tornado was over and she was trying to get out of the bathroom but she heard an explosion so she went back in and waited on us."

Stevens said all the roads are now open but debris filled them that night. He said on Highway 72 West there were RVs all over the roadway, as well as a truck and trailer.

"The trailer was from one house and the truck was from another house and it picked them up and threw them down to the highway," Stevens said. "We will see metal from Black River at City Lake Road and (Route) OO. It’s over a mile away."

Stevens said Black River Electric Co-op did not just lose their buildings but they lost an entire fleet of trucks.

"Here the tornado ripped a well-built canopy from between two small warehouses, completely destroyed one of these small warehouses, and then completely destroyed a larger steel warehouse attached to the main office," the NWS report read. "The steel warehouse was very well constructed, with steel I-beams approximately 1 foot in width, bolted into the concrete foundation roughly every 20 feet. These beams spanned the roof of the structure and supported a thick, crimped sheet metal exterior."

Stevens said Cherokee Pass Volunteer Firefighter Shane Adams spent four hours with a demolition saw and rescue truck cutting steel beams to get the BREC trucks out. While the trucks were not usable, the crews needed their tools from the trucks in order to get to work to restore power to the town.

"All of the trucks were cocked over to the side and shoved into each other," Stevens said. "They were dragging them out one at a time just to get the tools out. Some of the trucks only had windows popped out but with the steel falling on the booms, all of the trucks will have to be recertified before they can be put in use again."

Stevens said it really is pretty impressive how quickly power was restored with the amount of obstacles in the way.

Across US 67 from BREC an entire strip of storage units and several houses were destroyed as the tornado made its way into the industrial park.

"FSP was already looking at doubling the size of the building so two weeks ago they contacted Renee (Sargent with Sargent Construction) and she said with the increase of everything add 45% to the first building," Stevens said. "That is another thing people are running into with houses. If they built their house 10 years ago and that is what they had it insured for, they can't replace it for that."

Moving along the path you now get to City Lake Road and City Lake Park. The park may appear fine to someone who has not been there before but to locals it is obvious a lot of trees are missing. Now as you stand at the end of the parking lot, you can see the edge of the dam which before could only be heard from that spot. To the left you can see what remains of a pavilion and a large hedgeapple tree.

As you drive down the road you see can shiny metal sparkling in the lake and pieces of insulation sprinkled like snowflakes in the trees.

Stevens said a piece of metal off of BREC's roof was found at the very end of City Lake Road on Tom Mooney's farm, who happens to be on the BREC board. He said Mooney jokingly asked if BREC needed it back.

The American Legion was also completely destroyed as the tornado continued northeast. It then crossed Route OO and went through the main electric substation.

"In order to restore power, Ameren had to bypass the substation because the whole thing got wiped out," Stevens said. "This is where Ameren brings power in and goes to the city and the whole thing is just destroyed."

Stevens said crews jumped in immediately and began to fix the damage but there is still a lot of work to be done.

It has now been over a week since the events of that night. People are still cleaning up and some are beginning to rebuild but everybody is just pushing along.

Community steps up to take care of each other

"There are people coming out all over the place to help," Stevens said. "Nobody is standing outside looking for a hand out but the community is showing up and taking care of their own. It is a miracle we did not have any fatalities. If it had gone a half mile south, this would have been a whole different story."

Two area residents pleaded guilty last month after reportedly borrowing a vehicle and selling it without permission, then reporting it stolen …

An inmate previously housed at the Eastern Reception, Diagnostic and Correctional Center (ERDCC) in Bonne Terre was sentenced in St. Francois …

How many black holes are in the universe?

How many black holes are in the universe?

Madison County Road and Bridge crews work to clear downed trees throughout the county with plenty of work on their plates they continue to clear over a week later. 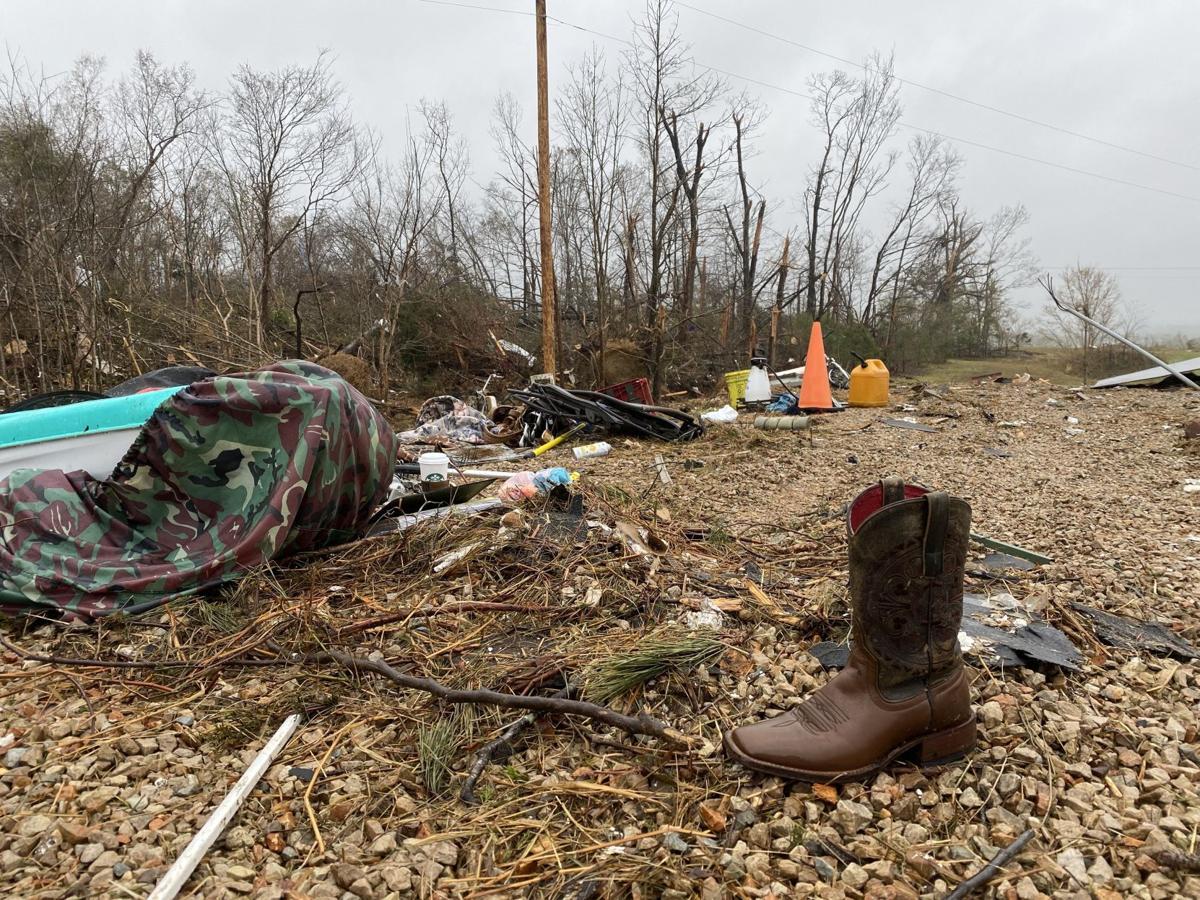 Belongings are being found all over the area after the tornado destroyed several homes and severely damaged even more. 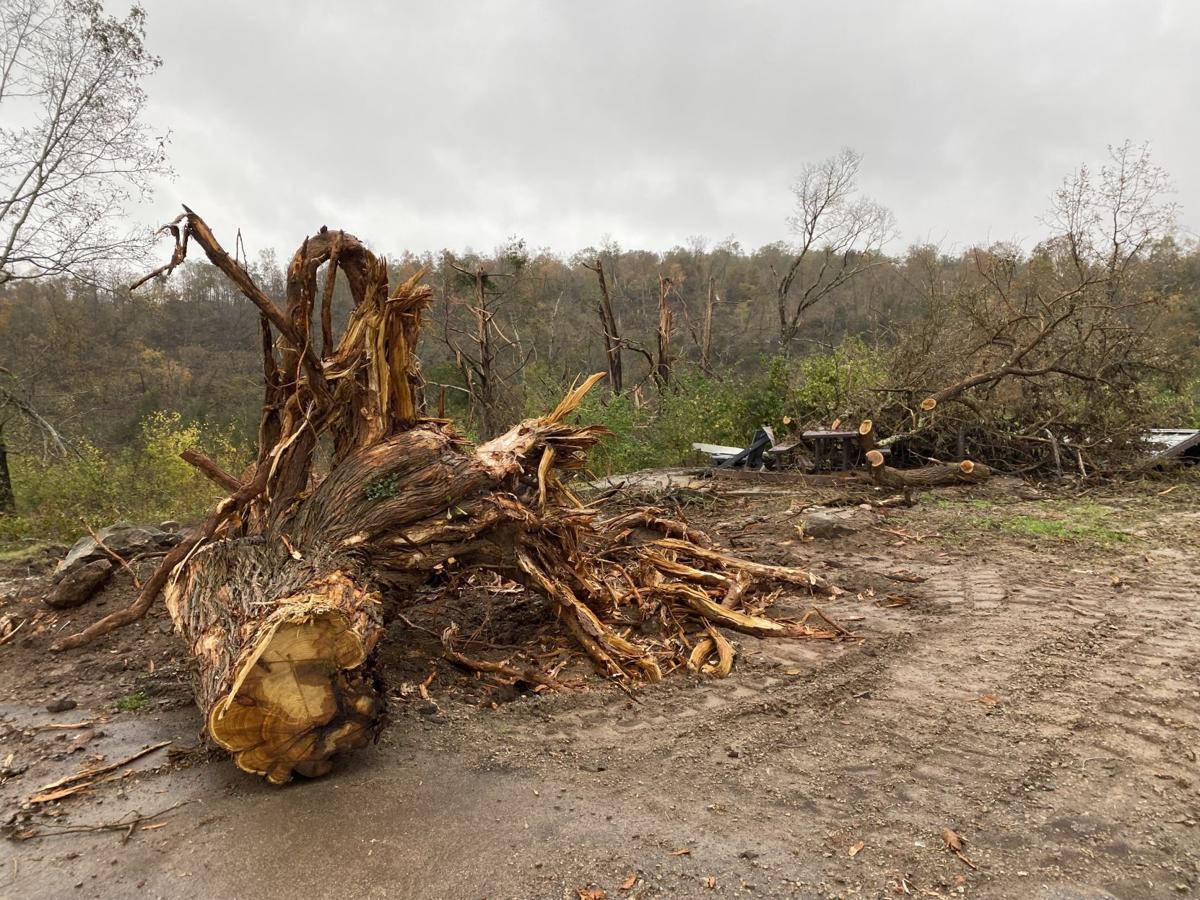 A large, beloved hedgeapple tree at City Lake Park is destroyed by the EF-3 tornado that came through Madison County Oct. 24.

A dog stands in the roadway as officials assess damage in the area near the electric substation. 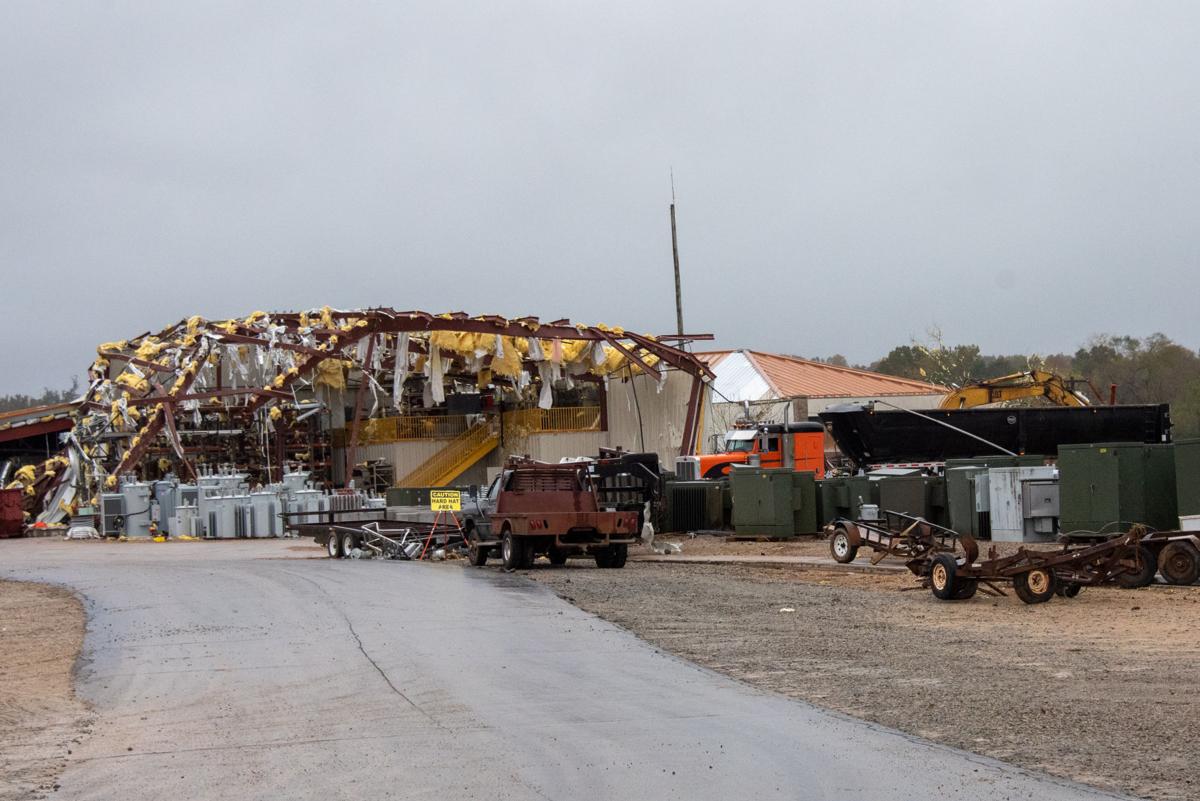 Debris continues to be removed from the Black River Electric Cooperative Fredericktown campus on Oct. 29.